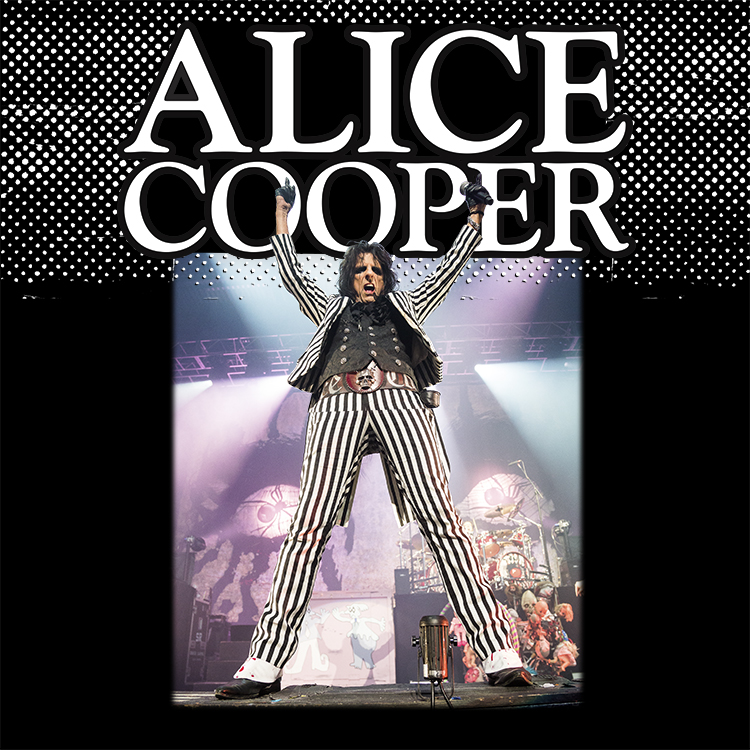 Over the course of the past five decades, Alice Cooper has been shocking crowds around the world—whether it’s by waving huge snakes in people’s faces, being victim to a guillotine or singing about cringe-worthy topics, Alice is a true showman that has a catalog of hits to back it up. With rock stars dropping like flies nowadays, we are really lucky to have Alice Cooper still out there going full throttle. Welcome to Alice’s nightmare. —Jordan Joseffer

How many times have you been decapitated?
Countless. When you’re on stage and your head is in a guillotine and a 40-pound blade is missing you by four inches every night—it gets your attention. It looks great, though.

Do you get any flak in the über PC age of 2016 for songs like “Cold Ethyl” or “Only Women Bleed”?
You know, I really don’t. I think those songs have become so classic. I think when I stab Cold Ethyl, when she turns into the ballerina and it’s a real person—that one gets stabbed—I do get this look from the audience, like, “What are you going to do next?” And then I sing “Guilty” and I tell the audience, “I’m guilty,” then they put me in the straight jacket and then they chop my head off. So there is retribution. I mean, I do get my comeuppance from it.

I’m terrified of snakes. What advice can you give people like me to overcome their fear of snakes?
The very first time that we ever used the snake, I was backstage in Florida and some girl had a little two-foot python or a little boa constrictor on her arm and I jumped back about five feet. Then it made me think, “Wow, if that’s my reaction, what would a 12-foot snake look like on stage?” In other words, I’m going to have to get used to this because it’s such a good prop for Alice. You know, of course Alice would have a snake. The bigger the better. It’s like anything else. You just have to get used to it. You have to get used to the personality of the snake and realize that if they’re fed they’re not hungry so they have no reason to strike you. But as a visual it really looks good
on stage.

You’ve been playing Bowie and Motörhead tributes. Were you friends with both David and Lemmy?
Oh yeah, definitely. We actually have about ten different ones: we do John Lennon, we do The Doors, we do Keith Moon who was one of my best friends. David and I were friends from way back. We started about the same time. We do T. Rex. We kinda revolve them in. Lemmy was recent and we’ve been doing “Ace of Spades.” Bowie gets a great reaction from the audience. There’s a lot of classic rockers out there. We could do two or three different songs for The Who: “My Generation” or “Pinball Wizard” or something like that.

We lost a lot of great musicians in 2016. Is 2016 cursed for rock ‘n’ roll?
It’s weird because it was people we didn’t really—I mean, I certainly didn’t realize that Prince had a drug problem. First of all, I didn’t know Prince very well. He was the one guy I really did not know much about. He kept very to his own kingdom there. That was a surprise to me. Whereas I was not surprised with Lemmy. The last time I saw Lemmy he said, “Alice, I quit drinking whiskey. I drink vodka now.” You know, everyone that knew Lemmy knew that he was on his way.

And he toured all the way up ’til the end.
Yeah, yeah, he did. With Bowie, everyone in the business kinda knew that there had been a couple of heart attacks and cancer was in there somewhere, but we didn’t know it was going to take him that quickly. Usually that can go on for a while before it actually takes you but it must have been pretty severe. Like you said, you never know who’s going to go next. The funny thing with me is that at 68 I have never been so healthy. Of course, I never smoked cigarettes and I quit drinking 35 years ago and I don’t do drugs anymore so that does pay off. It pays off physically in the long run. I didn’t realize when Joe Perry went down when we were doing the Vampires tour that Aerosmith were only doing two shows a week and we were on our eighth show in nine days. I’m kinda used to that pace and was a little surprised when he went out. He was more dehydrated and exhausted more than anything else.

The road can be grueling.
It is! If you’re 65 years old and you’re not really in good shape, it will get to you.

“Elected” came out in ’72 on Billion Dollar Babies. Do you think this song inspired Trump?
You know, the funny thing is when you look at the lyrics: “I’m your top prime cut of meat, I’m your choice. I’m your yankee doodle dandy in a gold Rolls Royce,” I mean, that does kinda talk about Trump, doesn’t it?

Yeah, you could write his speeches.
When I did that song it was almost a tribute to The Who because of the power chords at the beginning. Then I figured with the election and Nixon was in and we’ll make a satirical statement here and it will be funny. I’ll make it funny so everyone will laugh. I didn’t realize it was going to be a number-one record and now every four years it surfaces again. Kinda the same way “School’s Out” does every May. It becomes sort of an anthem. It was John Lennon’s favorite song because John was very political and I was the least political guy on the planet. He was always trying to get me involved in politics and I would have to tell him, “John, I’m just not into politics. I’m here to entertain the audience. You take care of the politics and I’ll just get up there and have fun.” 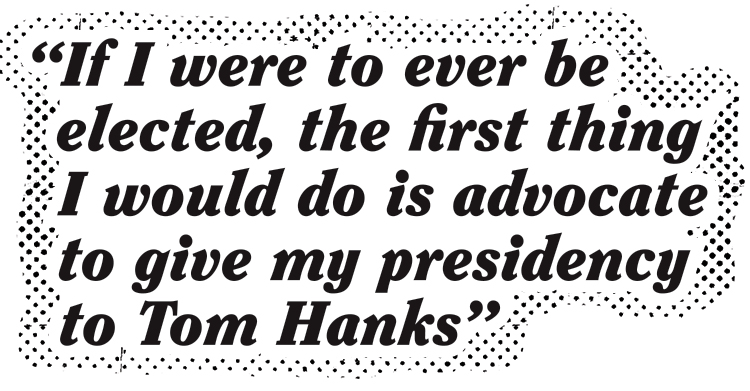 Tell us about “A Troubled Man For Troubled Times” and how you want to make America sick again.
Well, the whole thing about the election is that the last thing in the world I would want to do is be involved in politics. If I were to ever be elected, the first thing I would do is advocate to give my presidency to Tom Hanks just because he looks like he’d be a good president. Think about it. Wouldn’t you elect him?

Yeah, sure. Why not?
Nobody’s voting for anybody in this election. They’re just voting against somebody else.

I think it’s funny that people are saying you’re jokingly running for president while the real presidential race seems like a way bigger joke. Kinda scary.
It’s almost like something out of a Kurt Vonnegut book. There’s these two characters that you almost couldn’t write without telling of course it’s fiction. Yet, here they are. It’s a very weird election. It’s going to be a very weird time in America. You kind of want a guy to be president like your cool uncle. But we don’t have that.
I think Jerry Garcia said, “The lesser of two evils is still evil.”