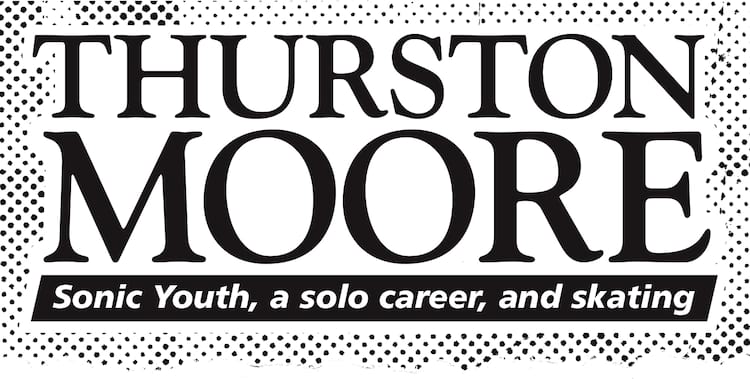 IT'S 6PM in London, England where Thurston Moore has lived for the past eight years. The founding member of Sonic Youth and guitar virtuoso moved from New York City after falling madly in love with book editor Eva Prinz and relocated to build a life with her. While that likely dashed any hope for a Sonic Youth reunion (he was previously married to fellow Sonic Youth member Kim Gordon), Moore has successfully settled into this next chapter with a new band, book projects and strolls around the sophisticated Hackney borough. His latest solo album, By The Fire, was released on September 25 and echoes the same magic that made Sonic Youth such an impenetrable force in the 1990s. Speaking to Thrasher, Moore chopped it up about the first time he saw the legendary skateboard magazine, filming the “100%” video with Mark Gonzales, Spike Jonze, Jason Lee and Guy Mariano and how Chuck D ended up on Sonic Youth’s classic Goo single “Kool Thing.” —Kyle Eustice 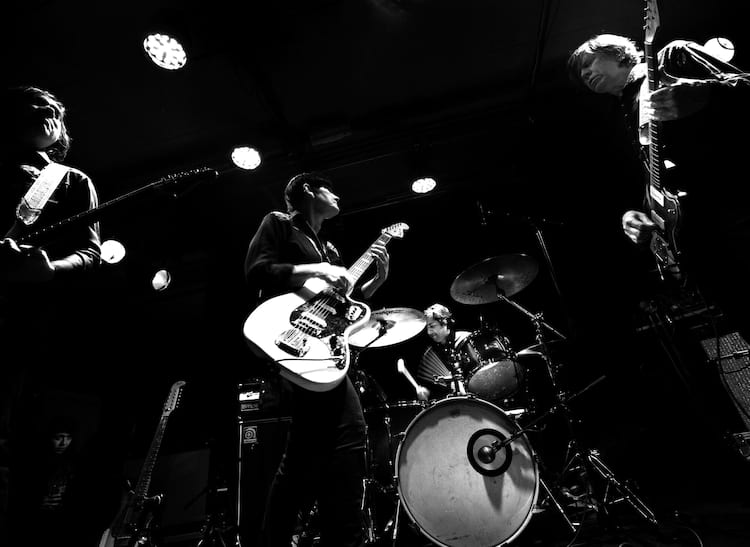 We have to talk about the video for “Cantaloupe,” which was shot in a skatepark. Sonic Youth and skateboarding have always gone together in my opinion, don’t you think?
The funny thing about it was Sonic Youth was never intrinsically a skate band, but for me, being so into early ‘80s hardcore, there was an affiliation with skate culture that I noticed. Living in New York City, there was no skate culture at the time. I first saw it when I went to Los Angeles. The first time I witnessed it in New York was when I started seeing some kids holding onto the city bus or thrashing around the Astor Place Cube around St. Mark’s Place. I was really surprised by that. I was like, Oh wow, skateboarding is coming to Manhattan. Because it was not a skateboard-friendly city at all; you could get completely annihilated. But that would certainly change. I really associated skateboarding with West Coast punk rock, which I was really into. So when Thrasher magazine first started, I started buying it because of the punk-rock element. I got the first Thrasher Skate Rock cassette that had the Big Boys on it and stuff like that. I was really enamored by skate culture but I wasn’t a skater. We were in LA once and I was given a VHS tape by a fan of the band who happened to be this guy Mark Gonzales. Mark was skating and he was also doing visual art. He had some kind of connection to Raymond Pettibon.

Oh, who did the album-cover art for Goo.
Exactly. There was a bit of a community in LA around these kind of weirdo art guys and Mark Gonzales was one of them, for sure. He gave me that VHS tape which was Blind’s Video Days. I took it home to New York; I was watching it and I was fascinated because the shots of the skaters were so amazing. I couldn’t figure how the camera was capturing some of the moves. I realized the cameraman was also on a skateboard, so it was a skater filming a skater and that’s what made it so cool. We looked into who made it and it was Spike Jonze. So we did the song “100%” and we were going to do a video for it. They located Spike and we got together with Tamara Davis, who was married to Mike D. For me, that was funny because I kind of knew Mike as a teenager, but I didn’t know when he became big and famous and moved to LA. I hadn’t seen him in years and I met Tamara and she said, “My husband is Mike D.” I was like, “You have to be kidding me.”

Did he remember you?
Well, that’s when Mike and I really became friends. I showed Tamara the VHS that Gonzales gave me and we found Spike Jonze. I remember sitting with this kid Spike, who was like this teenage boy, and telling him we wanna do this video that has that same aspect as the Blind video, so that’s what we did. He connected us with the rest of the crew, which was Jason Lee and Guy Mariano. Basically, that video was those two skaters. We just went around LA and shot them shredding everywhere. When we did the performance at that spot in the video, Mark Gonzales showed up in his car. I just remember him opening the trunk of his car and he had all this great art he’d done on split-open grocery bags. They were just the coolest pieces. He was like, “Just take one.”

Do you still have it?
I do, somewhere. Then that video came out and Sonic Youth was brought into a type of skate association, which I was only too honored to be part of. My biggest regret was going to the SST Records’ office and they had a skate deck that was a Pettibon board. They were giving us free records and stuff, which labels will always do, and I was like, “Can I take a skate deck?” They were like, “Oh, man, we sell those for like $60.” I was just like, “Oh God, don’t worry about it.” If I had $60, I don’t know if I would have bought a skate deck. The value of an OG Pettibon SST skate deck from like ’85 is $20,000 if you’re lucky enough to find one of those.

I have to be honest, I think I might owe Sonic Youth some money. I stole the Sonic Youth “Dirty” t-shirt—the green one with the orange little dude on the front—when I was 14. Now I’m realizing they’re worth $2,850.
Look, this is a confession. We totally forgive you. You are completely exonerated. Go out and sin no more, my darling. 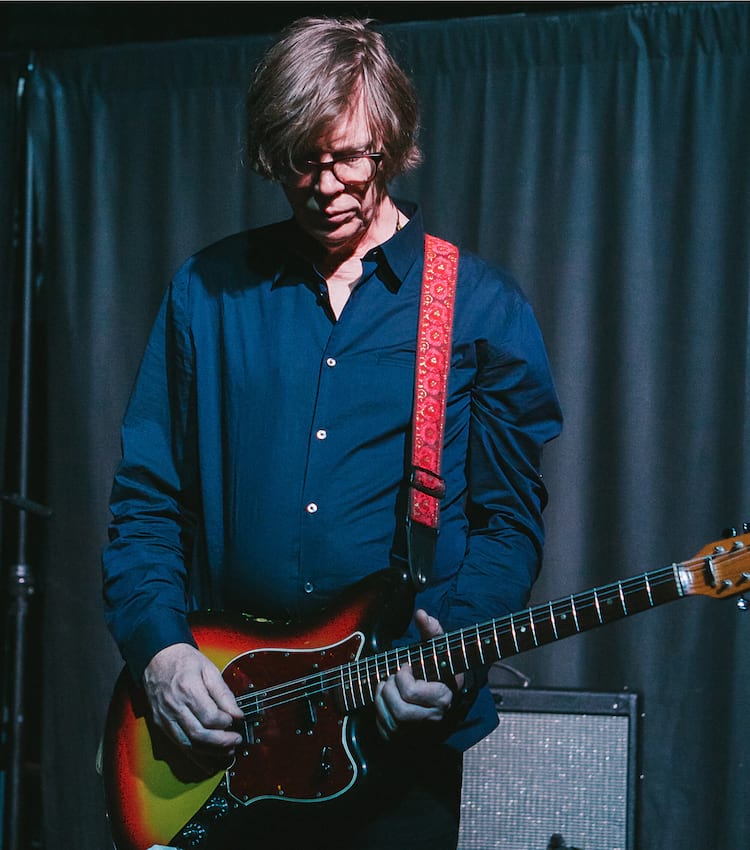 I probably owe J Mascis some money, too. I got a Dinosaur Jr. shirt that same day.
I will actually speak for J. I know him very well. Keep the shirt. If J gives you any problems, just let me know and I’ll take care of him.

I’ve interviewed him twice and I sit there wondering, Does he hate me? Interviews really aren’t his thing.
No, but they are an experience. Some guy from an English paper, when Dinosaur was first getting press, he was like, “What’s with that band?” I was like, ‘What do you mean?” He’d called him up to do an interview for NME and he goes, “Every time I asked a question, there would be no answer or it would be like a ‘Yes’ or ‘No’ or a ‘I guess so’ after a minute.” Then the interviewer said, “Are we going to be able to get through this interview?” and he said J’s response was, “This is as good as it gets.” I thought it was great.

I have to ask you how Chuck D ended up in the “Kool Thing” video.
We were recording Goo, which was our first recording for Geffen Records, so we had this budget to use a studio. When we went in there, they told us Public Enemy was going to be in the other room. At that point, Public Enemy had already put out It Takes a Nation of Millions to Hold Us Back and that had become such a critical record. The Village Voice has a jazz and pop poll of the best records of the year and that year, number one was It Takes a Nation of Millions to Hold Us Back and number two was Daydream Nation by Sonic Youth. For me, that was huge. That was really amazing. Then we find ourselves going into the studio to record a new record, which was going to become Goo, and the studio said Public Enemy is going to be recording their new record in the other room. That was even better. The whole PE crew was there—it was Chuck and Flav, the whole gang. We kind of cohabitated in the common room with the TV on and having take-out food all the time. I remember Ice Cube came by.

Wow.
Yeah, that’s how I felt. Ice Cube was just really gentle and he was there with his girlfriend and really soft spoken. Chuck was really happy he was there. He called him “Cube-ism.” He was great. Chuck was around and we were just hanging out with those guys and it was just really good times. They’d pop their heads in now and then while we were playing our weird music. When we did “Kool Thing,” it was a song that was kind of anti-misogyny. The idea of having Chuck come in and add to what Kim had put in the middle of that song, I think it was just like, Wouldn’t it be cool if that happened? and not thinking that it could happen. The engineer of our record said, “Let me go find out,” and he went into the other room. Then Chuck came in. We told him what the song was about and we weren’t sure what he’d think. But we also thought Chuck had a bit of awareness how marginal factions in their own culture need to rise up. The fact that it was this kind of a feminist song—he was all about it. He was like, “Let’s do it.” I remember asking him if he wanted to hear the song first because he hadn’t heard it. He was like, “No, just roll the tape.” He went into the room, put the headphones on and we told him when it was time to do it. He was like, “That’s cool.” When it happened, he just hit it. What you hear is one take. His voice on the microphone, it was like liquid honey. It was so rich and beautiful. Right away, we were like, That’s magic, and that was it. We just hung with those guys until the end of the session. They were doing Fear Of A Black Planet.

Another groundbreaking record.
Yeah, that’s what they were making. I remember bringing my It Takes a Nation of Millions to Hold Us Back CD in and I had every single individual on that CD sign the case.

Chuck does look like a “Kool Thing” in that video.
It was totally great. Through the years, we’d find ourselves at a European festival gig and Public Enemy would be there. I’d go bang on his trailer He’d relocated to Atlanta at that time and I had relatives in Atlanta, so we’d talk about that. It’s funny—earlier in the summer, when people were protesting police violence, Chuck had been putting up some really cool things on social media. I put up some things myself. I found something really pertinent that was happening in the South Bronx. They were really hassling people in the street. There was this footage that was really incendiary and I just couldn’t believe it. So I personally sent it to Chuck like, “This is bullshit.” And he responded. He probably gets a million emails a day and he responded with “WTF. We gotta fight the power.” The fact that my new record came out the same day as the new Pubic Enemy record, I was completely into that. That is the community I want my voice to be aligned with, for sure. 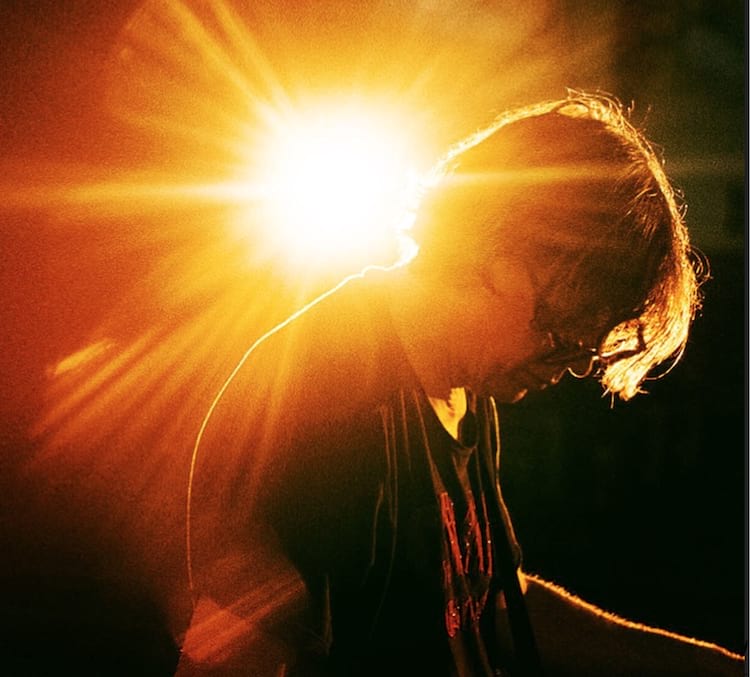