SKEGSS ARE the feel-good band of the summer. But summer feels endless when their tunes are cranking because they always make you feel good. Their sound is the perfect vibe for any skate trip, video part or even just a drive across town. I recently caught up with Toby Cregan and Benny Reed to dish on knocking the edge off, unplanned guitar solos and clocking 30-million listens on their first single. —Eben Sterling
As seen in the April 2022 mag 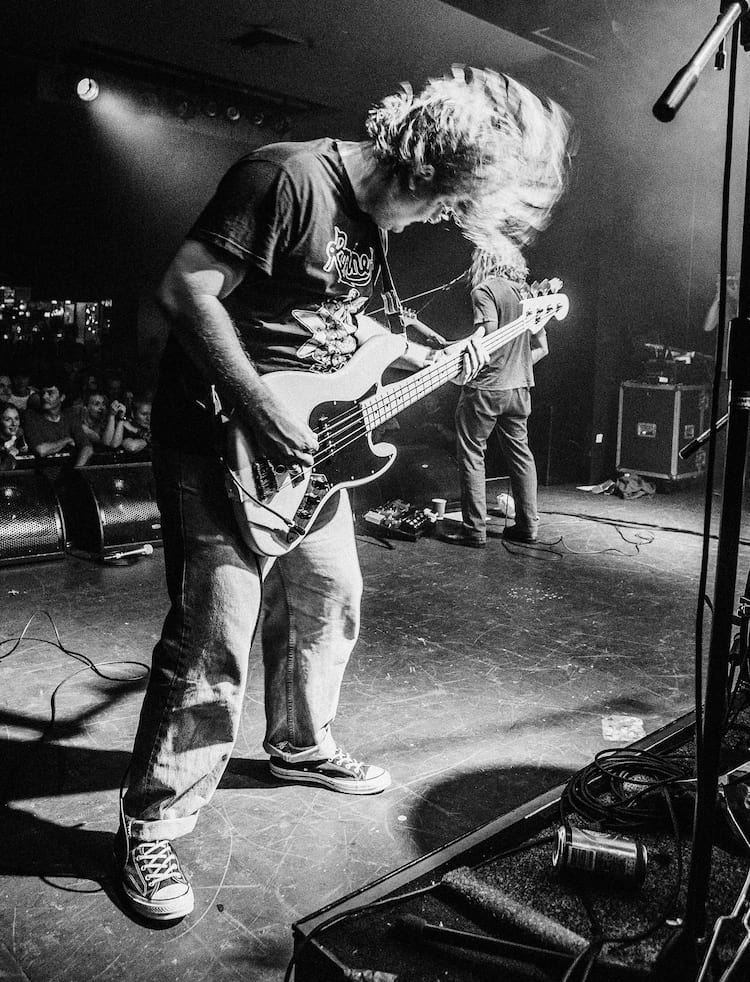 “Bush TV” i.e. staring into a campfire is a brilliant notion. Did you come up with that?
Toby: Nah, I didn’t come up with it. I’m not sure the first time I heard it exactly but I remember being a kid hearing it and thinking it was genius.

Are you big on camping? Do you still have time for nature, surfing and road trippin’ or is it all cities, hotels, music venues and shooting videos?
T: Yeah, I am big on camping and any adventure. I love it and try to do it as much as possible. There were a few years where we didn’t do much else other than travel and play shows, but that is a wild adventure in itself. But I love it all and still do it all.

The sentiment of “wait until you miss me” is so poignant. I really feel that. What inspired that great lyric?
T: The lyrics in the chorus on that one stem from coming to terms with the relationship I’ve been in for a long time and the way it works for us. It had been a while in between shows and I was at home longer than usual. There had been no bad feelings between us, but I felt the need to get away so our relationship could grow stronger when I returned. Ever since we’ve been together, I have been on the road at least half the time, so time apart is built into our dynamic. But over lockdowns and stuff I have been at home heaps and it’s chill, so it’s probably sweet either way.

In “Picturesque Moment” you say some people are “slaves to sobriety.” Have you struggled with booze or dealt with people trying to slow your roll?
Benny: Not really—only to the point where I want to get healthy for a bit. But I enjoy being able to have a beer with people. It sucks when people are either all or none with alcohol. My favorite people barely even get drunk often but have a couple of beers every single night to knock the edge off and wind down from the day. I think that’s a nice way to live—give yourself the freedom to get a bit of a buzz at times. There are obviously some people who shouldn’t touch booze, but some people go to extremes and restrict themselves from living a bit.

What’s your take on guitar solos or the lack thereof?
B: It feels a bit show off-y if you just rip one every song. Leave it to AC/DC maybe. Bring one out here and there, or there and here. My take—let them be unplanned.

I love your guitar tones. What’s your gear setup?
B: Cheers. I run a Fender DeVille and a Twin Reverb through a few clean distortion pedals—a blueSky reverb and a booster pedal.

Did you use a different setup in the studio while recording Rehearsal than what you use on stage?
B: Yeah, we experimented with different amps—like a more vintage Fender and used different guitars when recording to layer it with different heat, but it seems most pedals can get pretty close to the sound of the record.

Do you switch off playing bass and guitar?
B: Yeah, we swap sides on the stage and swap guitars. We run through each other’s set up because we sing our own songs on the guitar.

Should we talk about your song “Get On My Skateboard”?
B: Can you hook us up with a free skate? I gave mine to a friend who was with me the last time I stacked it.

Thirty-million listens on your first single—you guys must have been like, This is easy! How crazy was that for you?
B: It was gradual, but it’s crazy when you see a number like that. It’s a cool feeling when there are people that like something you do and comment nice things. It feeds the fire.

What was your musical life leading up to the release of “L.S.D”?
B: I moved up the coast six hours from where I lived to find people that were keen to start a band, so I was just on a quest.

Has a lot changed since that first single went mega or are you still doing the same old shit just to a bigger audience?
T: We have been doing the same shit the whole time. Like Benny said earlier, we have grown as a band very gradually, so the changes—like better booze and hotels—have come in small increments and we are grateful for all that. But yeah, we aren’t doing anything different.

Final question—were you guys invented in a lab over at Volcom?
T: Ha! Nah.