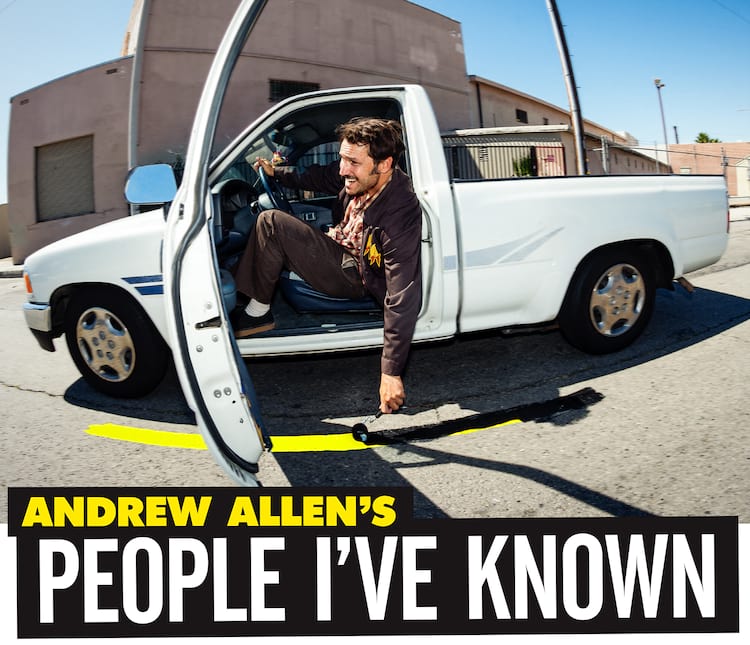 Andrew’s been a friend of the mag since his epic Prevent This Tragedy part and he’s met a lot of characters along the way. From Phelps to AVE to Too Short, this one’s so damn funny. 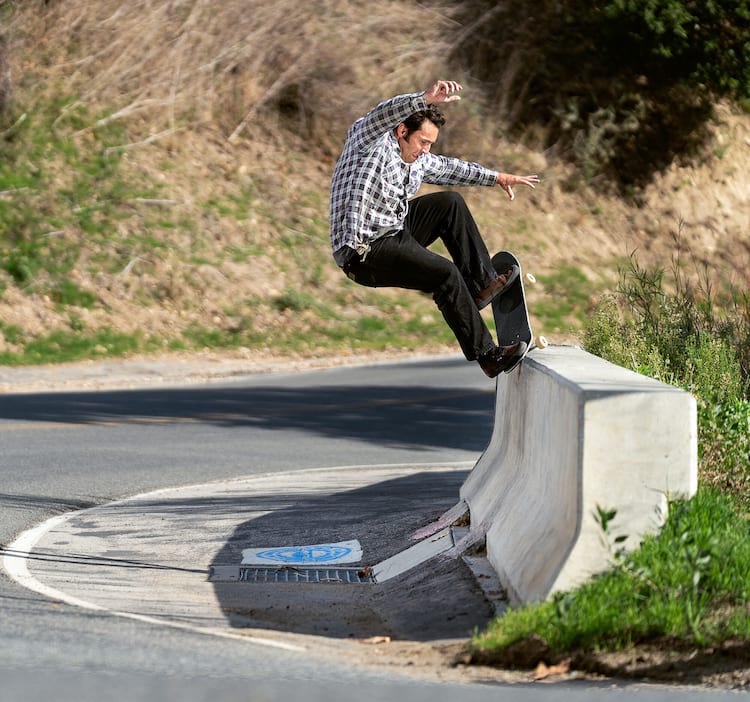 One day I was at High Speed hanging out in the parking lot when Jake told me to come up to his office. He sat me down and began to give me the deal. I don’t remember the exact context, but at one point he pulled out a pistol and pointed it in every direction, then to his head and said, “C’est la vie.” 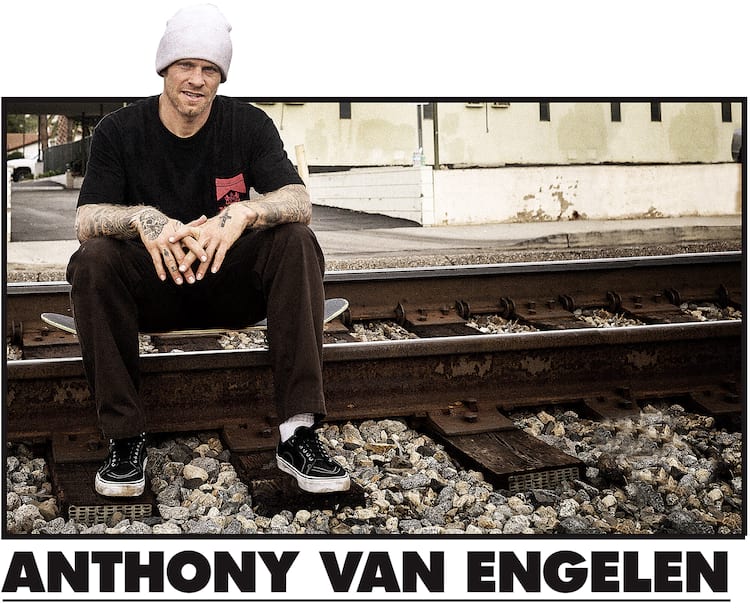 The first time I met AVE I was skating the Santa Ana park with Van Wastell who introduced us. Fast forward a couple months and the Vans team went on a team vacation to Puerto Vallarta. I was in the jacuzzi when AVE arrived, which took him by surprise. “You? I thought you laid drywall or some shit,” he told me. 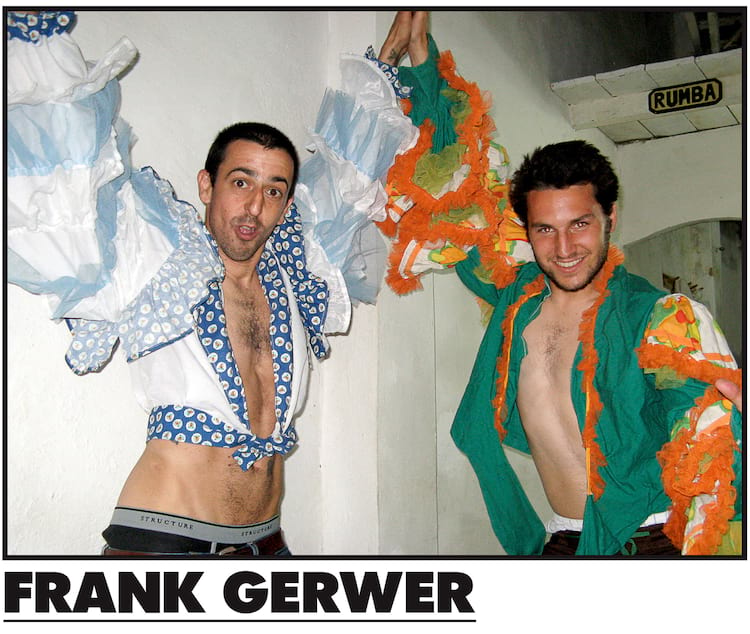 We were on a trip to Cuba and ended up in some warehouse party. Frank and I were a couple mojitos behind everyone else and were a bit weary of the whole situation. He told me, “Keep your back to this wall, eyes towards the door and be ready for whatever comes through that front door.” A couple rum drinks later, we loosened up and ended up in some fuzzy-sleeved, frontless flamingo costumes. On our way out, Frank had another strange feeling and went and checked under a parked car across the street. Sure enough, he found one of the crew sleeping beneath it. Basically, Frank’s party radar is on point.

Nick filmed for 411 and shot photos for Thrasher. He’d take me out skating in his turbo-diesel Mercedes and shot my first sequence in the mag—a switch heel front board on a handrail. He’d remind me that he “made me” but it’s pretty much true. I believe he’s a professor at UCI now.

When I was 13 I asked Brian Sumner for his autograph at a Network 17 demo in Newport Beach. He signed the back of a sticker for me. I think that was the first and last time I asked for anyone’s signature. 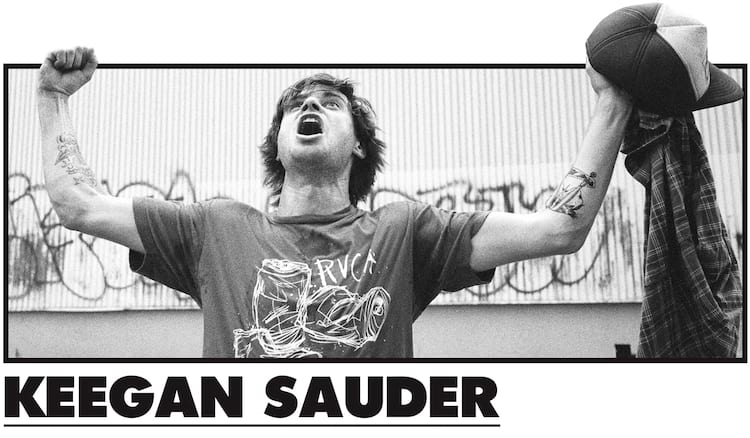 Keegan once told me that he bombed a hill naked and that it was the most liberating feeling of his life. I’ve still yet to try it. 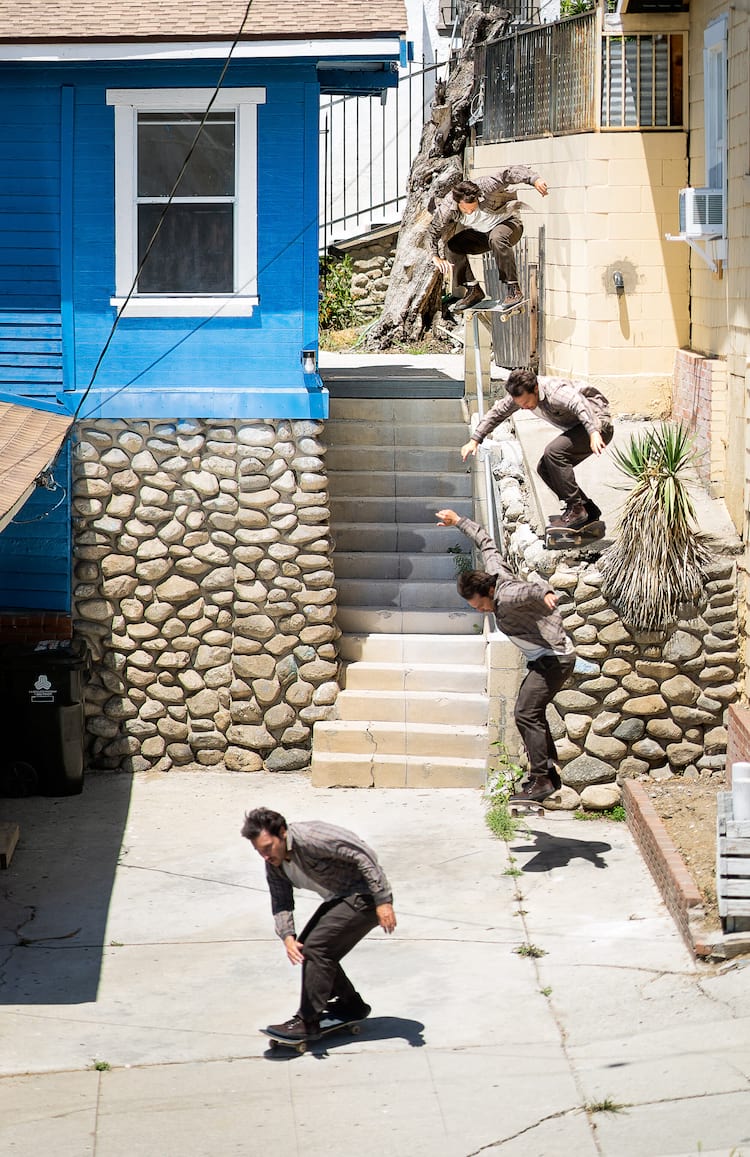 We drove all night home from Albuquerque through Arizona and into San Diego. As the sun was coming up, we were almost to Pete’s house when he requested “My Hometown” by Bruce Springsteen. That song with the sunrise remains vivid to me. Every time I hear that track I almost tear up. Love ya, Pete.

The first time I met Big Ern was at a bar in Ybor City during the Tampa Am. We were both definitely underage, and when someone introduced us I said, “Waddup, fool?” He quickly replied, “Don’t call me fool!” A couple minutes later I saw him peeing into a Budweiser bottle under a patio table. Friends ever since. 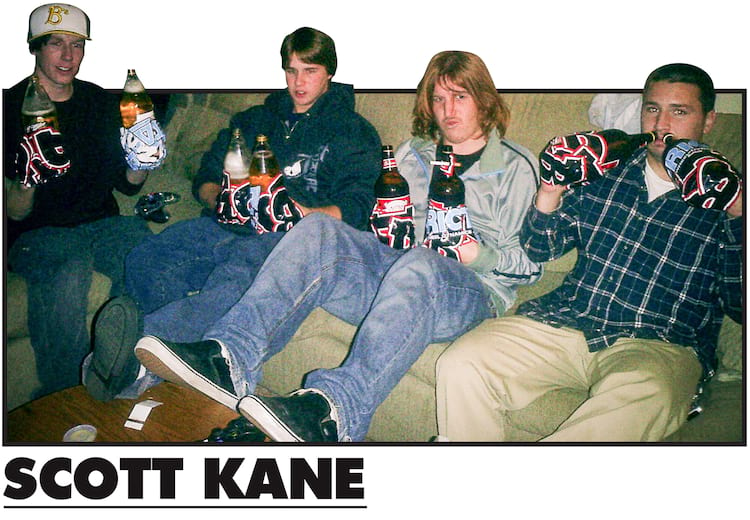 After my first Vans trip to China I clicked with Scott. He was so ahead of his time. The Bootleg part is fucking insane. Scott bought a house and had his friends move in. We would party there at night then go skate in the day. One night we decided to play Edward 40 Hands. Great idea, only problem was that we had all eaten El Pollo Loco right before. When playing this game you try to drink the two 40s as quickly as possible so you can remove the duct taped bottles to pee. Instead, filled with 80 ounces of malt liquor, we ended up puking up BRCs all over Scott’s backyard.

One morning I was attempting to leave a hotel where I had accidentally stayed during a trade show event. I was walking out of the lobby contemplating taking the bus home when I ran into Eli Reed and Javier. They said they’d just ordered a twelver of Heineken to the room and invited me to roll. I figured that was easier than dealing with the bus, so a couple beers in and Javier told me he had seen me do the Johnny Utah performance at Point Break Live for the Vans Xmas party. I explained that I was trying to become an actor so I could get my SAG card. I heard the benefits were good. Javier ended up giving me his. It was expired, but either way—I still have it. 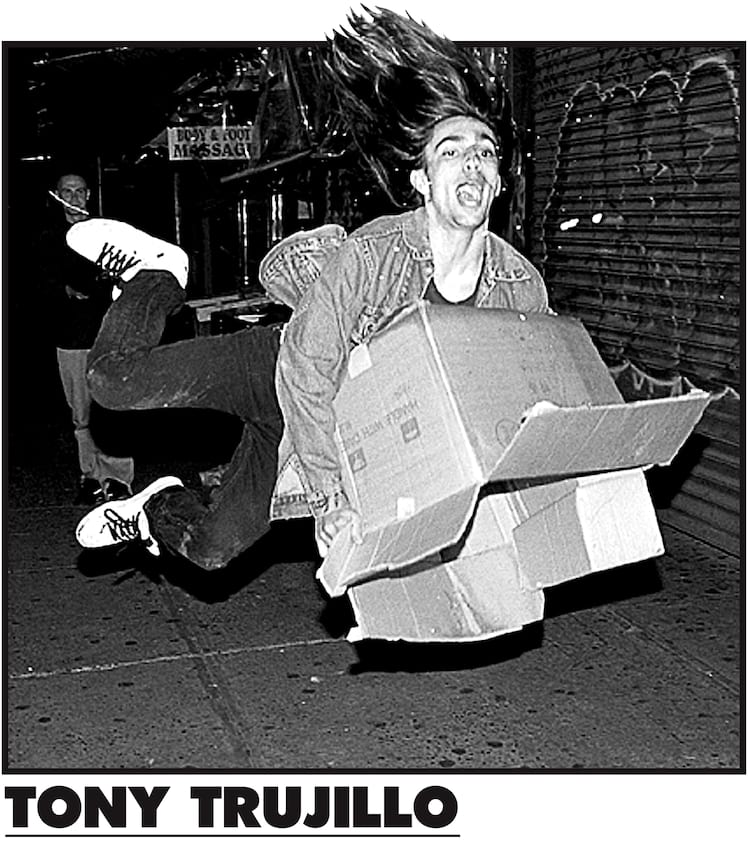 The first Beauty and the Beast trip was so surreal. I hadn’t met any of the Girl guys before the trip so I was so nervous. I grew up idolizing Rick and Mike. All that fear quickly diminished and the good times turned on. Camping and skating with the whole crew on that trip was so good. Everyone was ripping. One night we were staying on Orcas Island and got invited to a house party. The host only had one rule—don’t break any windows. So a van full of us mobbed to the house. The place was shaped like a hexagon or something with these huge windows on each wall. Within five minutes of our arrival, Tony was bounced off someone and into one of the windows. Of course he broke it. 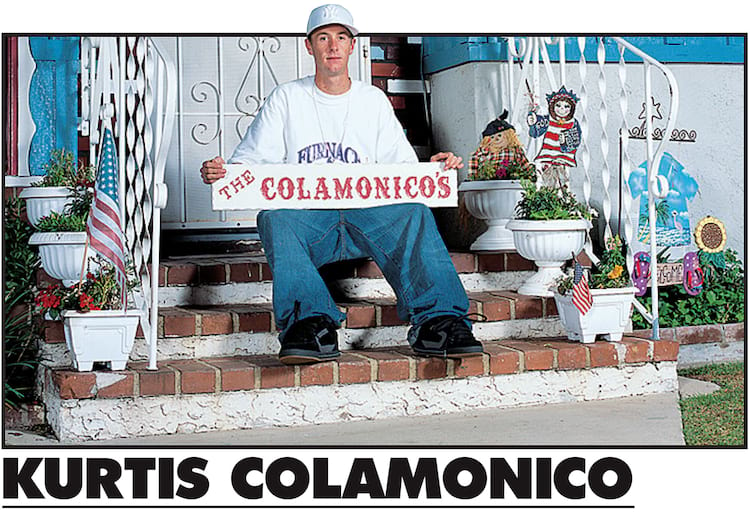 There was a best-trick contest in a mall parking lot in San Diego. They had the San Dieguito ten rail down a wooden set of stairs (the actual rail from the hallway that everyone skated) and Scurich tried to get me to skate it. So many dudes were just hucking. I was so nervous I just jumped off and watched. After a pep talk from Nick, I got back up there and flailed one switch heel front board. Kurtis, on the other hand, was ripping. He must’ve rifled off 20 tricks down it. For whatever reason I got back up there and tried it again. To this day I don’t know what happened. I blacked out in the air and came to while rolling away! People were trippin’ and so was I! I got a cardboard check for two Gs, but I felt bad because Kurtis shoulda won that. I ended up using the money to tag along on a Darkstar trip to Barcelona that summer.

I rode for Matt’s company Legacy for a year until Dwindle put the kibosh on it. For his 30th birthday Matt rented a boat to cruise around the San Diego harbor. It was a formal event so I went to the thrift store and bought a suit. Someone said I looked like a banker in my oversized wool suit. Shane Cross got compared to a magician because he had a tuxedo jacket and a top hat. It was a who’s who of skating and everyone was having a good time until a commotion erupted below deck. Matt had gotten busted getting freaky with his lady—the birthday boy in his birthday suit.

No sag on a beefy noseslide to noseblunt slide to fakie.  /  Sequence: Sherbert 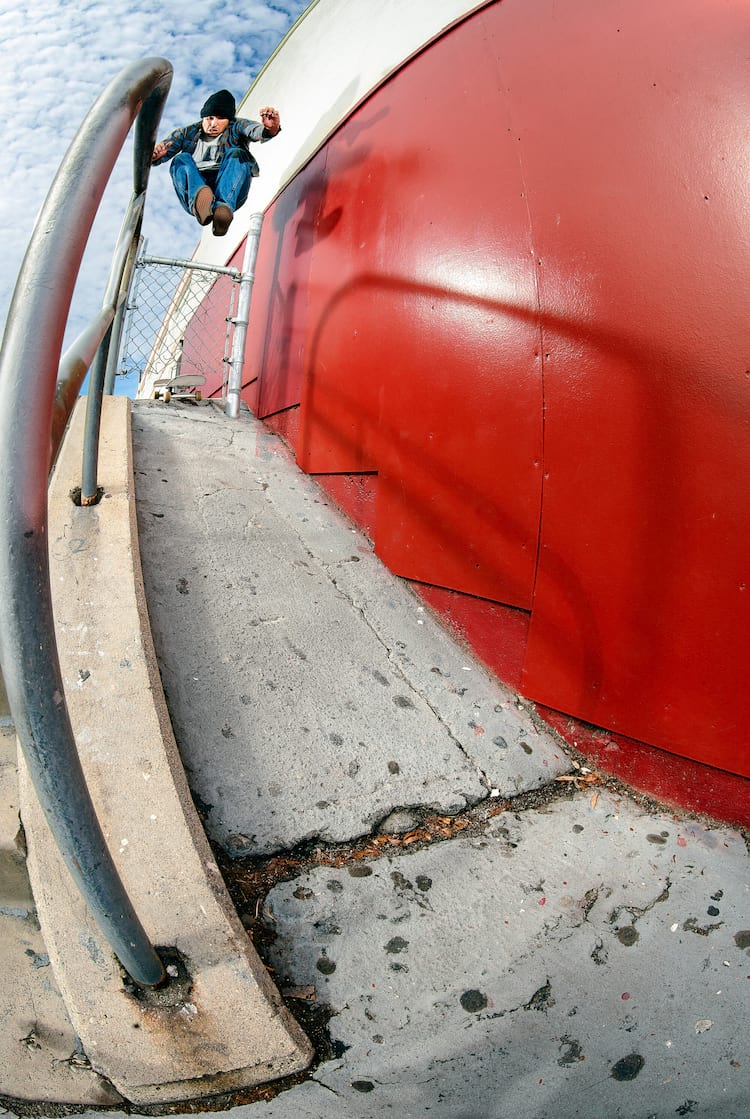 I’ve ridden for Vans for 18 years. Many skaters have come and gone from the team through that time, but Angel was something else. Dude rips at life. We were in Israel and had the opportunity to swim in the Dead Sea. Everyone was soaking the mud into their skin and bathing in the sulfuric water when all of a sudden Angel exclaimed, “I’m floating; I’ve never floated before!” All that salt in the Dead Sea kept Angel from sinking.

Tino moved out West and we became roommates along with Nuge. That house entertained so many people—Nuge on the grill and tons of skaters slept on the floor. One day Tino got a call from some foreign country saying that he owed the IRS a shitload of money in back taxes. He panicked and was freaking out. He was about to transfer them money when he finally became suspicious. Thank God he hung up the phone. It’s an evil world out there. 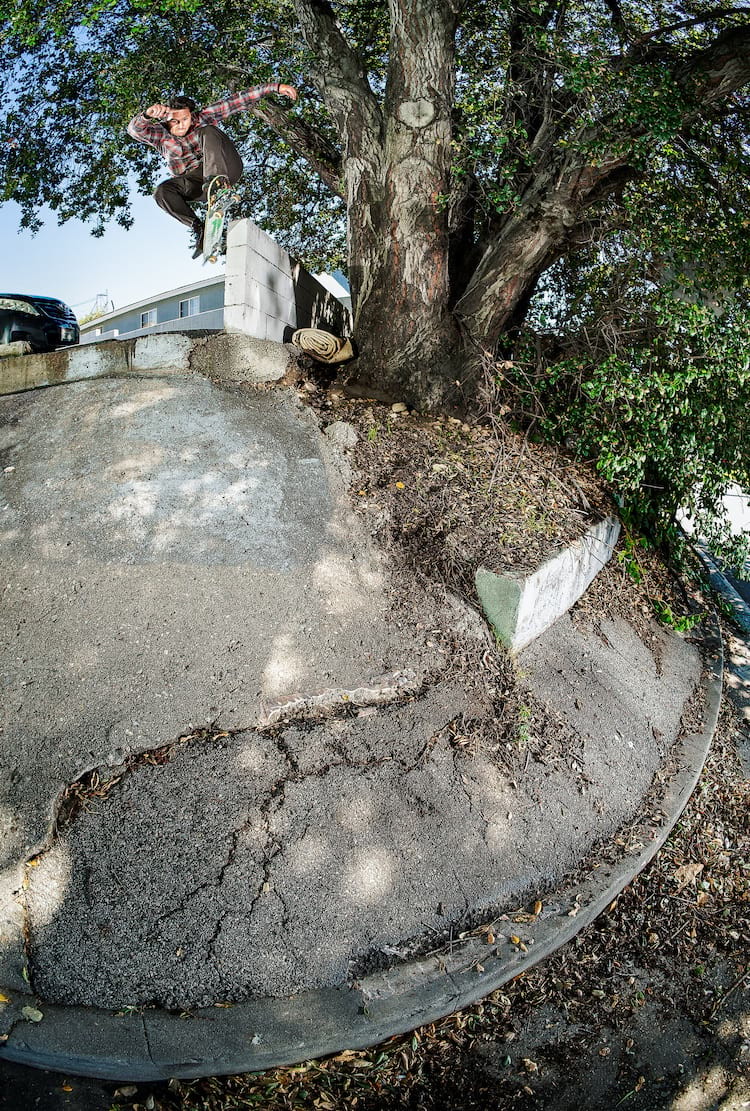 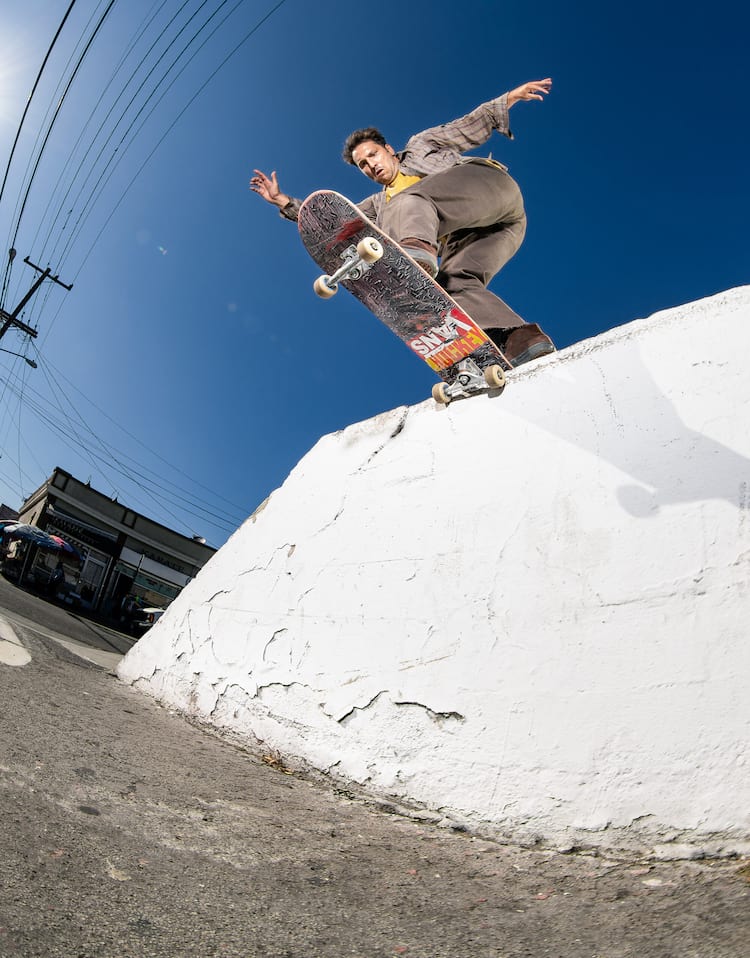 On the second Beauty and the Beast trip we were floating down a river and Max complimented me on the straightness of the cut of my pants that I’d turned into shorts. I took it as high praise because of how much I look up to Max. Now every time I cut my pants down I have an enormous amount of pressure to make sure the cut is as straight as possible. 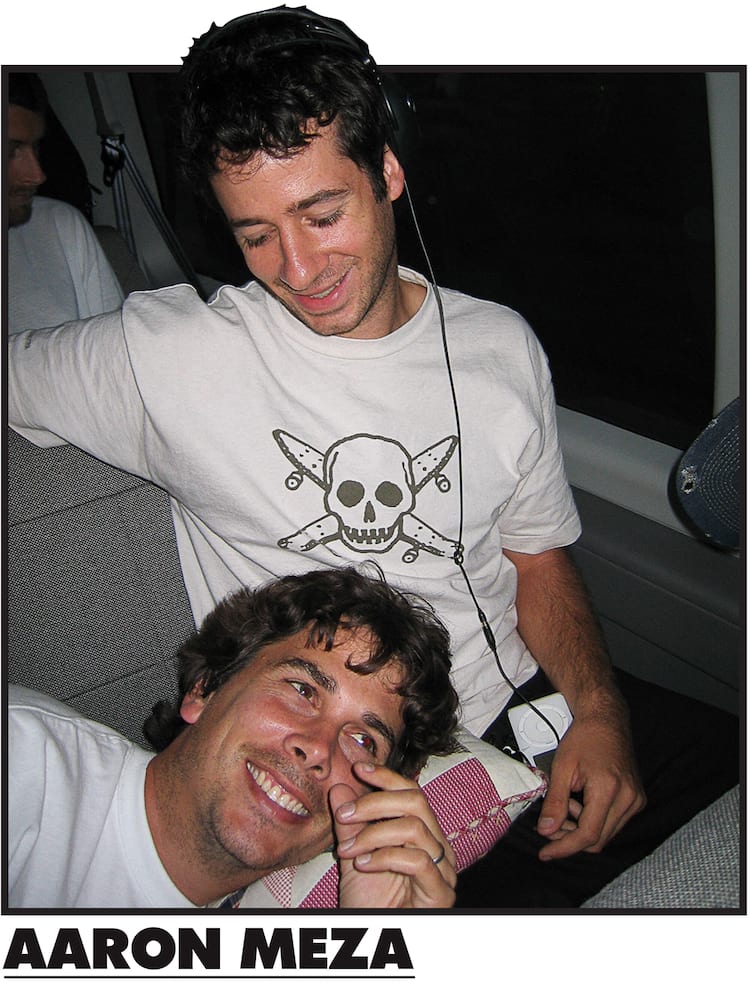 I love The Mez. I used to watch all those videos he would put up on the Crailtap site. That Belle and Sebastian song rings in my head whenever I look at a couch. On the third Beauty and the Beast trip to Europe I was concerned with how much stuff I was gonna travel with, so I made the decision that I could go without underwear. Free balling for three weeks couldn’t be too bad, right? Boy, was I wrong. I confided in Aaron about my discomfort and the angel that he is he blessed me with a pair of Quiksilver hybrid boxer/swim trunks. Kinda perfect because I could wash them out and they would dry quick. Meza was sent from above.

Once on a trip, Van was skating with his two front pockets flipped out. When I asked him why his pockets were out he said, “Kiss the bunny between the ears!” then chuckled with his deep, sarcastic laugh. After the trip I went home and skated the park with my pockets out, too. I always copied everything he did. He was the coolest.

I rode for Antihero for ten years, a time I cherish. I got to travel and skate with my heroes and am beyond thankful for everything Julien, John and the Deluxe crew did for me. Riding for Hockey was the toughest decision I’ve had to make. I still feel guilty for abandoning ship, but I needed a change. I’d made other changes in my life and wanted something new. Skating for Hockey, I was already a fan of Benny. His edits are amazing and he has a good eye for things. He’s a genius of sorts and someone I wanted to work with. The last five years have been fun and I’ve enjoyed skating when I’m not dealing with injuries. I’m excited for the future and just want to thank Benny for his hard work and the opportunity. Thanks, Benny! 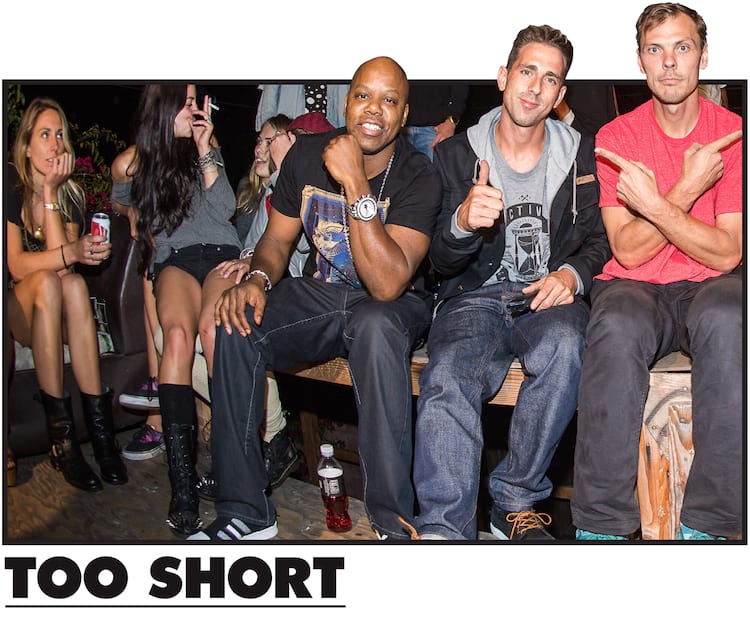 I have plenty of regrets in my life, but this one haunts me. I walked into a Korean BBQ spot in Studio City one afternoon and saw Too Short. He was with some women and was on his way out as I was walking in. As we crossed paths we made eye contact and in my head I said, “Wadduup, Shoorrt Daawwwg!” What came out, however, was a mumbled-and-stuttered, “Wadup, Dddogg.” I couldn’t believe it. I had the chance to give him the props he deserved and I kooked it. 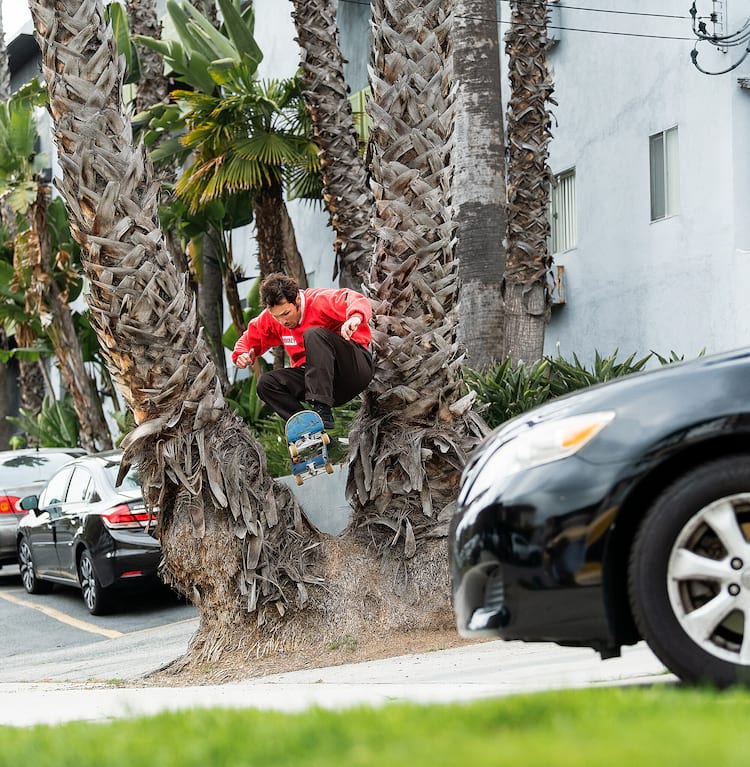 Straight as an arrow, wallie between the palms.  /  Photo: Colen 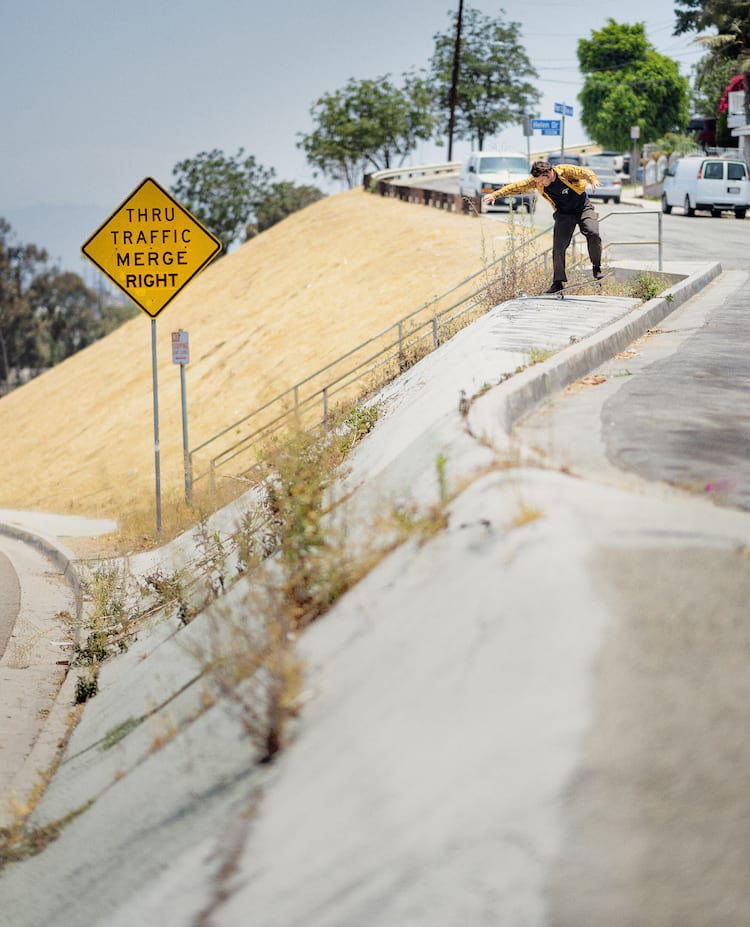