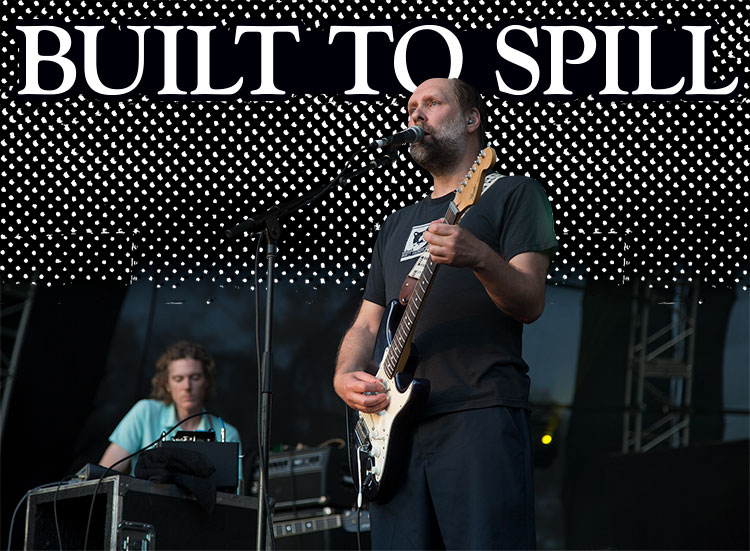 Even if you’re not familiar with Built to Spill, you’ve probably heard them in a skate video. They’ve been around since ’92 when Doug Martsch recruited the band with the intention of replacing them with every album. Now, over 25 years later, there has only been a few changes with Doug remaining as the constant. We killed some time  before their set talking about the band, the magnetic pull of Idaho and skate videos. —Jordan Joseffer

Why’d you name the band Built to Spill? Were you bad at holding drinks?
Ha! It was a game my wife and I played where we’d take turns writing a word. She’d write a word, then I’d write a word and we’d make up poems and stories. So when I was trying to come up with a band name we went back through them together to see if there was anything interesting and it was a part of that.

You’re from Boise and lived in Portland. What do you like about the Pacific Northwest?
Well, I ended up in Boise because I kind of grew up there and ended up following my wife back to go to school after I lived in Seattle for awhile. You know, if you’re from Idaho you kind of gravitate to Portland or Seattle, pretty much. Maybe San Francisco a little bit but those are the big cities that you move away to and I got sucked back. It’s alright. 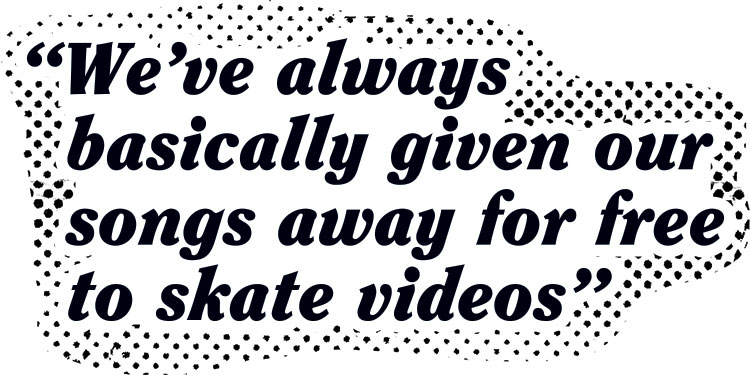 Your music has been used a lot in skate videos throughout the years. Why do you think it pairs so well with skating?
I don’t know. We are kinda picky about who we do stuff with. We don’t like to license much to any commercials or very many TV or movie things, but we’ve always basically given it away for free to skate videos. Every once in awhile we’ve gotten paid, but skate videos, snowboard videos, surf videos, if anyone approaches us we say yes because that’s where we’ve gotten all of our raddest fans. I don’t do any of that stuff and I never did but some of my greatest friends and Built to Spill’s greatest fans have been people who are into that stuff.

Yeah, a lot of people find music through skate videos. That’s how I heard you guys for the first time.
It happens all the time. People will say, “Oh yeah, that song. so and so skated to it!” It gives them enough time for the song to get it in their head. They might have heard it once and been, like, whatever, but then they watch it over and over again and the song sinks in and becomes attached to something they’re excited about. It’s better than a music video for us.

Are you familiar with any specific skate videos that used your music.
Nope. People can’t believe I don’t know what they’re talking about, but I really don’t know.

I heard with each album you wanted the lineup to change. Is that an intentional way to keep the music evolving?
Yeah, the original idea was that and also I had been in a band for a bunch of years that was a real tight-knit group of people. There was a couple brothers in the band and there was some emotional issues—some fallout and stuff—and I wanted to avoid that as well. I wanted to be with a group of people where we were all enjoying each other’s company and not getting on each other’s nerves too much, so I thought it would help with that as well. Also, at the time, I was making a record in Idaho and I was planning on moving away from Idaho. So that was another reason. I was going to change the lineup anyway but I wanted to start to establish the band’s name. Over the years there has been a lot of lineup changes but not that many and not because of that reason. After we made maybe our third record, I was playing with Brett Nelson and Scott Plouf and I wanted to solidify the lineup so we could get good. Switching lineups overtime is hard. Everyone plays differently. I wanted to develop a sound and I wanted more contribution and people to have more of a stake in the band so I bagged that idea.

What are you plans for the future? New albums, touring?
We’ve been doing one-off gigs but we are going to tour a bunch soon. We are going all over the country. We’ve been working on songs for a few years and hopefully those will come together in the next year or so and the record  will come out in a couple of years.