By now you've probably watched Dane Burman's Cold War part and seen how hard he is on a handrails and the professional security sworn to protect them. This is not an act! He really is that much of a jerk! We catch up with this Australian bad-arse, post-game, to talk cover, last part, Nyjah and 2013 SOTY predictions. Congrats, Burman! 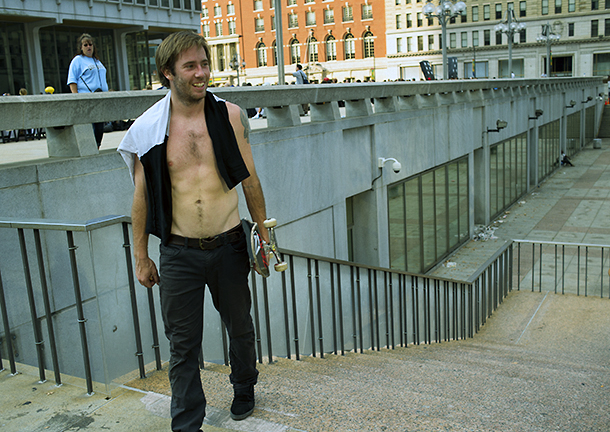 Dane enjoys the afterglow while that fat lady uploads the footage to her Friendster.

First of all, have you recovered from your Thrasher cover yet?

I'm getting there. My ankles have been pretty shitty, just because of the years of abuse. I think that 50-50 was just the icing on the cake for a few months. My right knee has been giving me grief lately too. I don't know where that came from though.

What did it feel like to ride away from that?

Amazing. I wanted to cry I was so happy. My body was on the verge of giving up. So when I made that it was a pretty victorious feeling. Haha!

Are you ready to apologize to the skaters of Philly yet?

Haha, never! Take no prisoners or something. 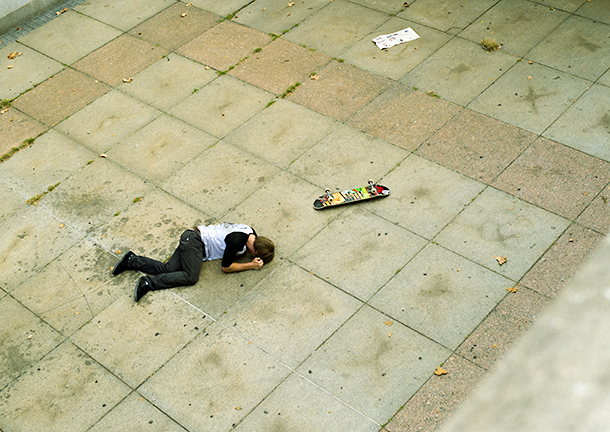 Yes, that's pee you smell. Get back up, Burman! 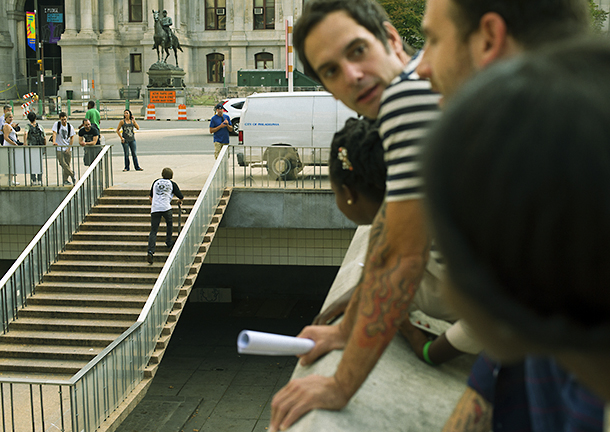 'You know, I should really film this for Youtube so the Element Euro team can put it on their Facebooks ...'

'We both worked and put as much heart into it as each other so we both earned it.'

You are the first pro skater to have the biggest trick of their career premier on a teenage girl's Vine account. To what can you attribute this daring, forward-thinking media plan?

I might be. Haha! That was pretty heart breaking. So much of my heart and soul and time and money poured into that trick with the intent of it being a surprise and it got blown out the day after I did it. It didn't take away from how good it felt to do it, but it still hurt.

Who's that man you are smacking around in your video part? What lead up to that slap attack and what was the aftermath?

Some security guard. I had just landed on a back lip shove and that dude showed up, parked in the way and tried to stand at the bottom of the rail. I just tried to show him who had more or less to lose and he got shook and got out the way and I got a few more tries in and made it.

So close, yet so far. 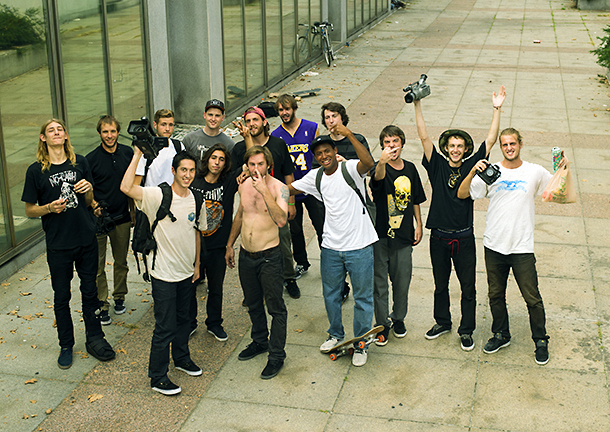 The good homies! Thanks Philly!

Who or what do you intend to slap for your next video part?

Hahaha! Who knows? Don't want to blow out more tricks.

So did you get last part or what? What's the deal?

Tommy and I got last part. He's last on hard copy and on the Thrasher site. I'm last at premiers and on I-tunes. The consensus was that we both worked and put as much heart into it as each other so we both earned it. I like it. 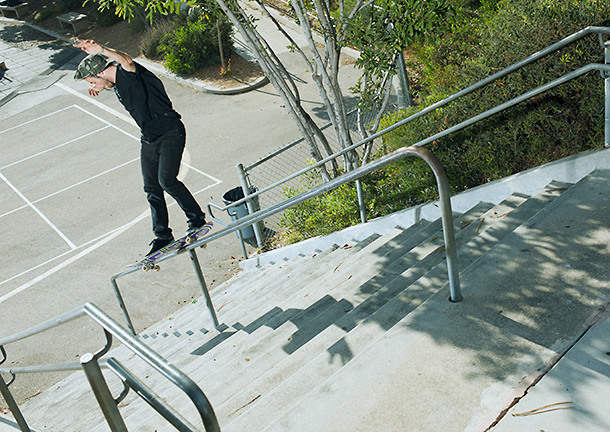 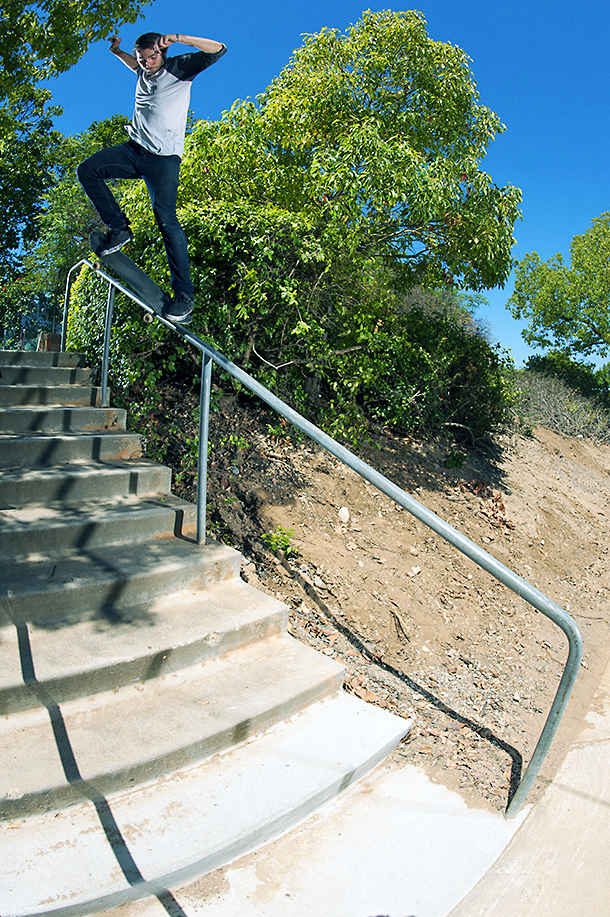 Switch crooks with no foot flap. Harder than you might think!

'Nyjah is a really good guy. Super nice and loves skating. Can't hate him for that.'

Is James Brockman a great skater or the greatest skater?

He's the greatest. Zero is his only sponsor. And Vol 4 have just started helping him out and he kills himself for the love of skating harder than most dudes 5 or 6 years younger than him and ten times more paid than him ever would.

Has anyone played the Cold War drinking game yet?

So is Ed Duff on the team now or is he still gonna ride for Threat?

No idea. Haven't heard anything about it. But Ed's footage blew minds. I love him. 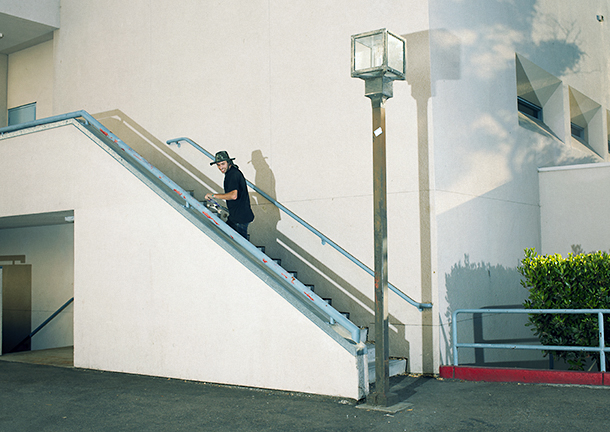 This thing. Still a trip, right? 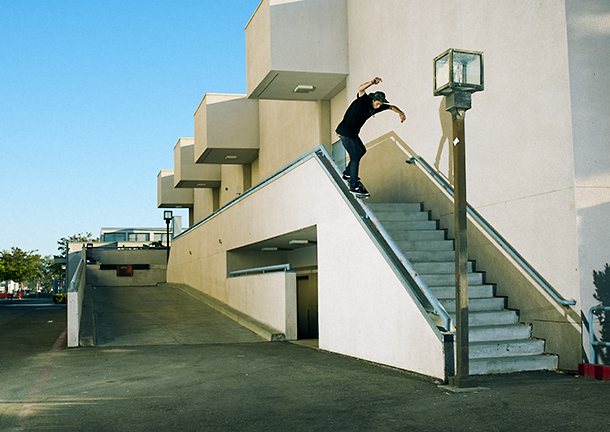 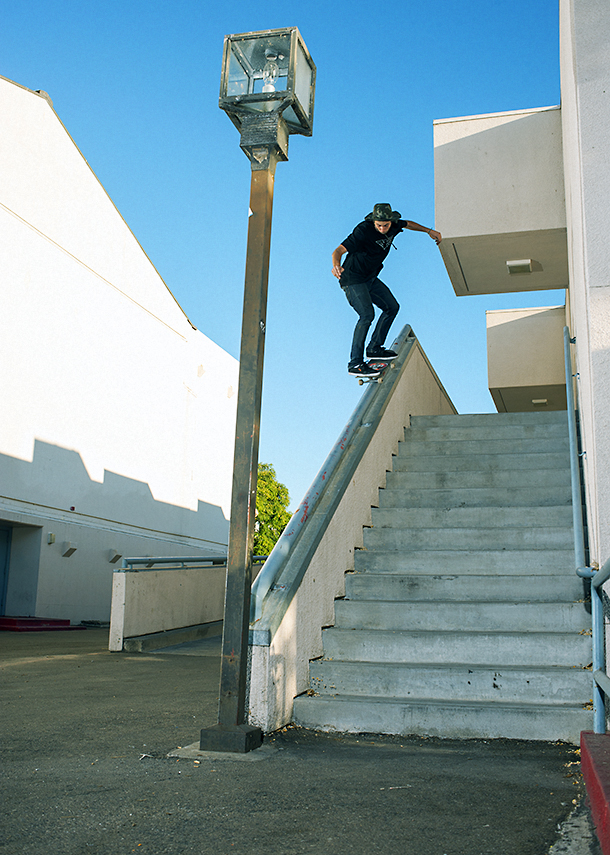 Speaking of Threat, what did Forrest think of Cold War? What about Nyjah?

I think they both loved it.

You've been skating with Nyjah lately. What's he like as a bro?

I only skated with him once. He's cool. He's a bit kooky but he's a really good guy - super nice and loves skating. Can't hate him for that.

Did you really take away his San Diego privileges?

Trying. He's got enough spots up North. Doesn't need to take all the SD spots too. 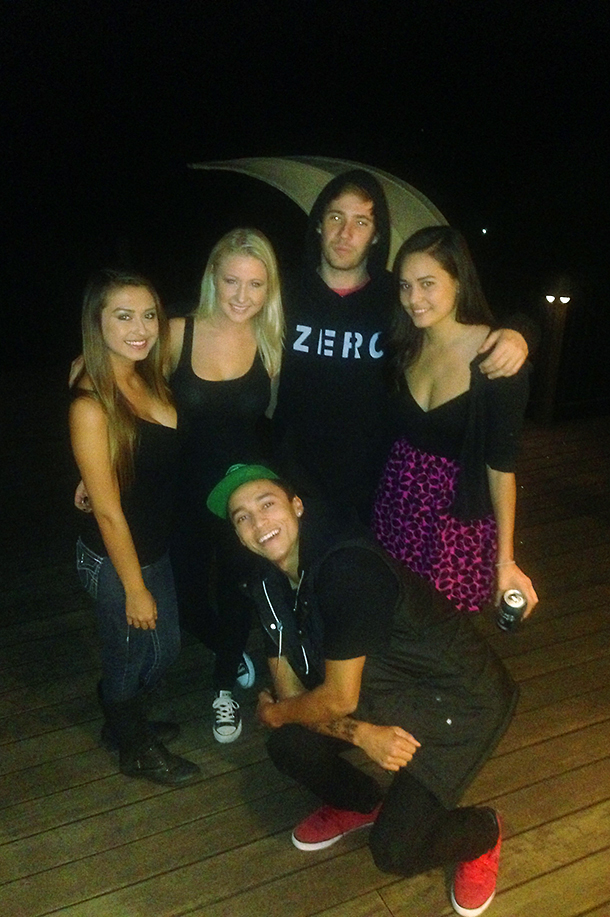 You recently lost a roommate. How did Trevor let you know he was moving out of Black Box?

He didn't. He had a U-Haul one night and the next morning he was gone.

What will you miss most about him? 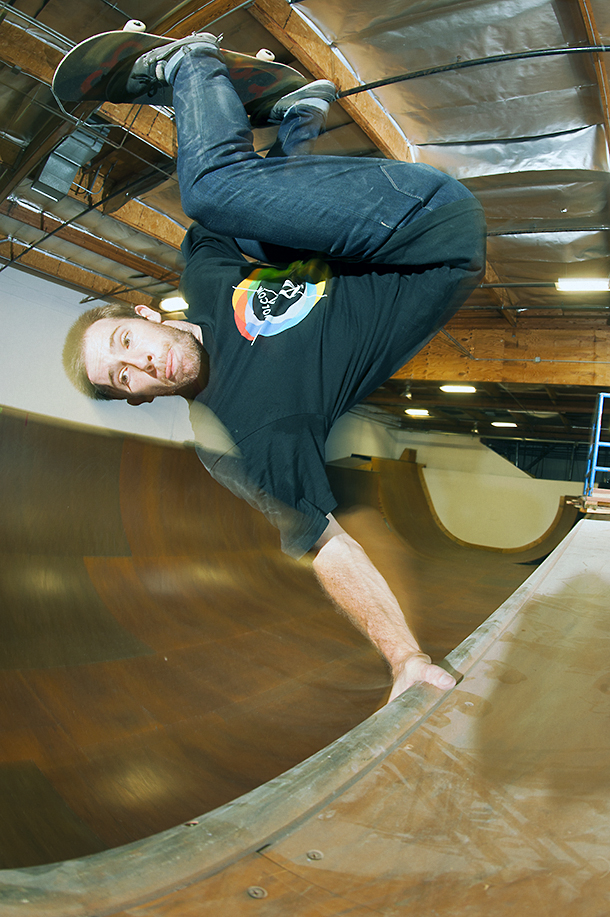 Burman rips vert, too? No wonder he got to go on Skate Rock.

'I wouldn't pick myself!'

How is Ant Travis' video part for Thrasher coming along and when can we expect to see it? How would you describe his style on and off the board?

He's a steezy motherfucker - so smooth. He's about to be on DGK after this part. It's coming along real nice too. Got about a minute and a half of footage.

Do you reckon you've got Australian SOTY locked down with this one? 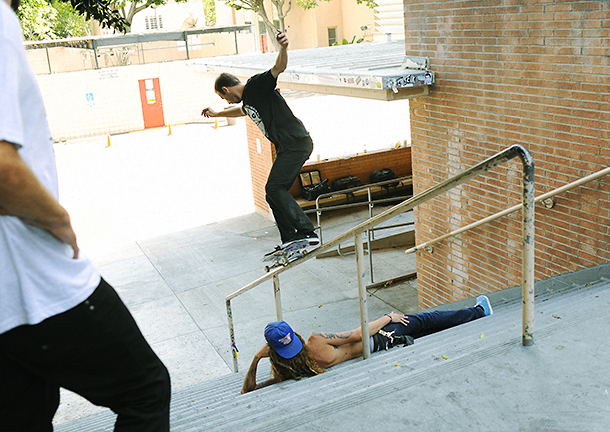 Another big grind, just for thee-atts.

Now that your work is done for now, what videos are you looking forward to?

Habitat vid could be cool. Who knows? 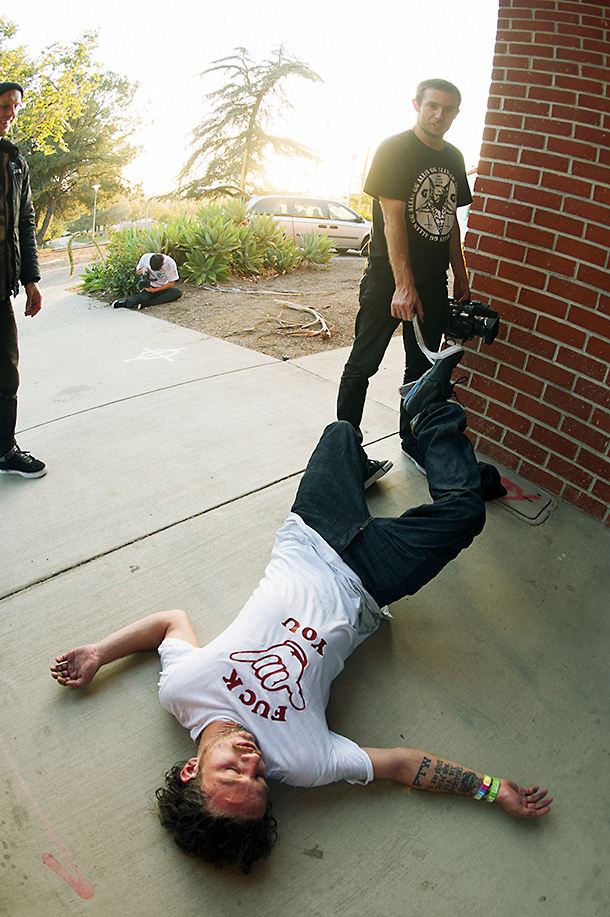 Hands on product testing, Burman is nothing if not professional.

Who is your pick for 2013 Skater of the Year, besides yourself?

Westgate. Haha! I wouldn't pick myself! 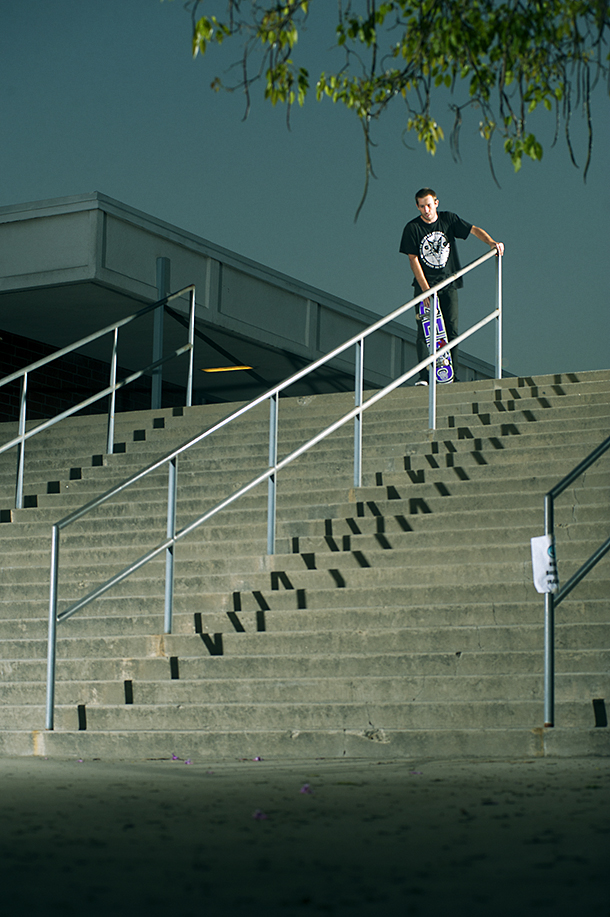 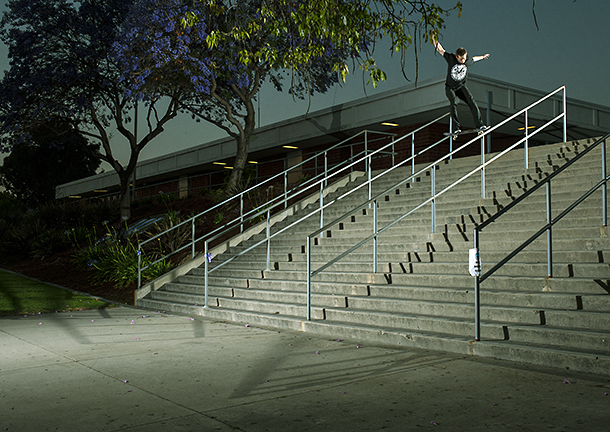 He may not win ASOTY, but Burman is gonna have a lot of new fans after this movie. Nice work, Dane!