French Fred Mortagne is a true artist in a world of ham-fisted hammer gatherers. Through his work in Menikmati, Sorry, numerous Cliche videos and his award-winning photos he reminds everyone that skate tricks and the beauty of the world around us are not mutually exclusive. His images are full of hope and whimsy without holding back on the rad. Fred survived childhood obesity, a Sheffey attack and two years on the road with Flip. And with his amazing skills, we're lucky to still have him. 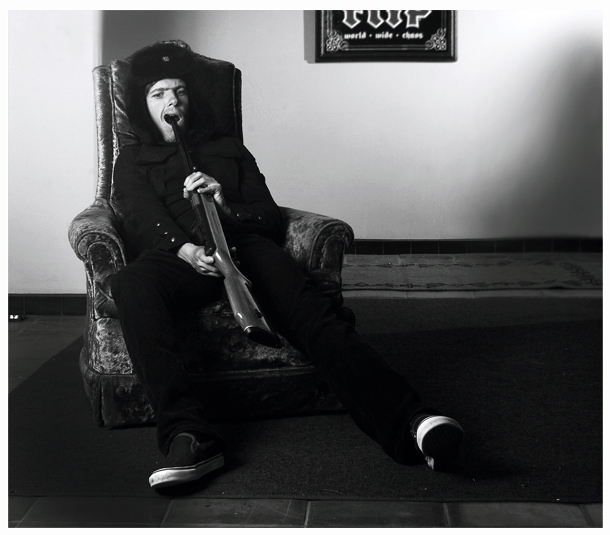 I took this photo. All the others are Fred's.

"I saved the camera. I hit my head on the ground."

The nerds in America probably know you best from the Menikmati video and the Flip videos.
Exactly.

And the bigger nerds know you from the Cliche videos on the Internet. What else have you been doing since Menikmati? I haven't seen you at the UCI rails in awhile.
No, no. I'm in France. Traveling a little bit, but not as much as I used to. Just trying to make some good stuff. Have fun trying to do what I do.

So America didn't make you fat?
No, well, a little bit. After two months in America it was like, 'Eww! Getting a little chubby.' I realized I have to be very careful. I didn't care much about what I eat. I ate junk food. And if you already eat bad in America - ay-yi-yi!

So how did you stop being a fat ass?
You eat veggie and you eat healthy.

That's it?
Yeah, no diet. No nothing. Anybody can do it. You just have to be into not getting fat. You have to be patient. I think I lost 25 pounds in a year and a half. It doesn't happen over night.

Is that why you never come back to America? You're afraid you'll get fat again?
No, no. I'm good. I'm professional now. I can come any time I want, as much as I want. 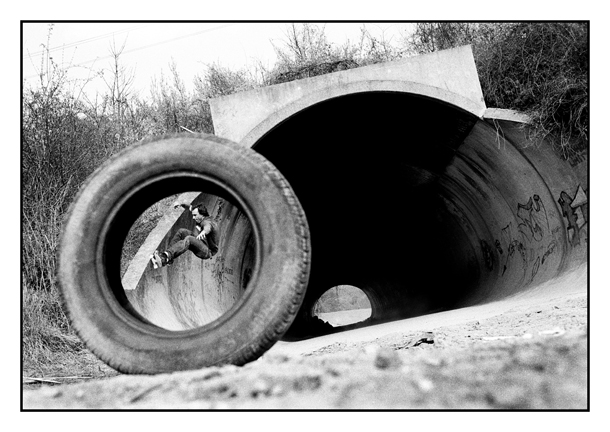 It's been a long time, so please tell the story about when Sean Sheffey threw you off the pyramid at the 1999 World Championships contest in Germany.
You like this story, uh?

I love it.
Aaron Meza, he loves it too. Uhmm. I saved the camera. I hit my head on the ground. I don't know. He decided to skate the course another way and we were in his way. He grabbed me by the collar, threw me down from the pyramid. He said it was an accident and he didn't touch me, that it was just an accident.

It was in 411. Was that your first 15 minutes of fame?
It should have been an opener! You know? It would have been the best opener. You would have seen Rodrigo starting his trick and, wheww, the camera flipping upside down. He was fucking around with a lot of people that weekend. I don't think it was something special.

You don't think you were singled out? Just caught in the crossfire?
He just wanted a little fun I think. 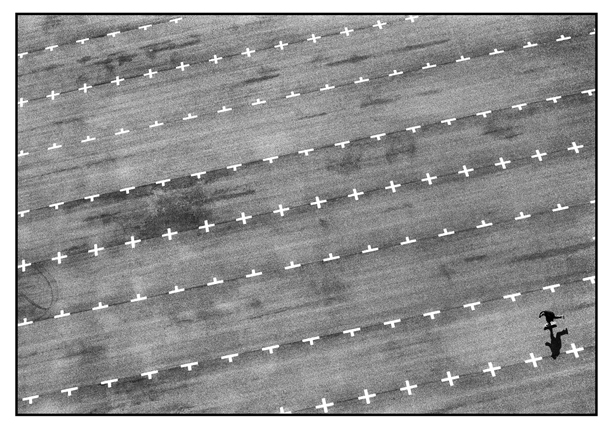 "It could have easily been the Tangle."

In the video world, you have been credited with a couple of things, including the Frangle. What is the Frangle?
It's the Fred Angle, or the Frangle. Maybe some rolling long lens. It's good to have your signature move out there. It's funny. But as I always say it could have been the Ty angle, or the Tangle. He was doing it at the same time. We didn't know we were both doing it. I got credit, that was good, but it could have easily been the Tangle. I got all the credit so I stole something from the Americans for once. For once we do it this way around. 'Cause usually it's the other way around. You have Michael Jordan and Lady Gaga. I don't know if she's American. Maybe not.

I also know there was a time where you innovated a fish-eye technique were it looked like the skater was riding a constant roller-coaster, where every spot looked like a mountain. How did you develop that?
You think so?

Yeah. What were you trying to accomplish?
I think the people that invented the fisheye did that, not me.

But you had a special finesse with the wrist to make everything look extra wild.
To tilt it? To make it steeper?

Yeah.
You know who invented that? It's not me. It's Sturt.

Yeah. Right. But he couldn't do it moving at the same time.
That's right. That's right. I improved his amazing technique. That's why we make a good team.

I know Sturt also was one of the first guy to haul out the big reflectors for filming. I remember you dragging out a few reflectors while filming for Menikmati. Do you bring those out anymore.
No, no. I never use them. The only time I used them it was super-windy on the ramp. I would have needed an assistant. I would have needed a little Chinese kid. One time Sturt was using reflectors when he was shooting with Geoff and Mark and he says, 'Don't look at me! Don't shoot me! I don't want you to steal my technique!'

"It's good when you're a kid and you have no life."

So is your working relationship with the Flip team over? Will you ever make another video with them?
No, I think Ewan is doing an excellent job. I don't have the energy. I don't even want to make a full video. It's too long.

Do you prefer the Internet short?
Yeah, maybe not just for the Internet, but I prefer doing short stuff. Two year for a video - it takes too long. It's good when you're a kid and you have no life. That's fine. I'm too old. I don't want to do that. It takes too long just to get a trick. You spend all day for one trick.

So you'd rather get a simpler trick, but shoot it out of a tree or through a tire?
Yeah, exactly. That's better. 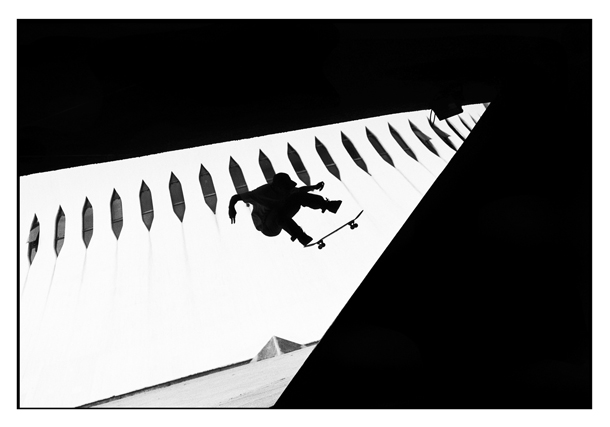 "If there's a tire and a triangle and a building - oh, I'm in heaven!"

I notice in the recent Cliche Charles Collet piece there's very little motion. Everything is set up like a photograph. Tell me about that approach.
That's what I want to do: come up with filming that has very few motions and very strong compositions like a photograph. The idea is so when you look at it you have time to see what is going on. You see the spot, the surroundings, the trick. Yeah, it's more like a moving photograph.

It's very beautiful. Nice work.
Thank you. Yes, I'm trying not to use the fisheye. Focus on the aesthetics.

I know you love a tire and triangles and European architecture. Describe the perfect Fred scene.
The perfect scene? If there's a tire and a triangle and a building - oh, I'm in heaven! I'm always carrying a tire in my trunk now. Actually, for the Brophy commercial he does a switch ollie over a tire. It took a long time to find a tire, actually. It was kind of a mission.

Does the Euro crowd appreciate this more subtle style of skating and filming?
I don't think it has to do with Europeans or Americans, it just has to do with doing something new. So you don't see the same thing over and over again. Maybe they will like it because they don't get to see it that often. Then again, I don't think they will want to see it forever. It's not something I will be able to do for a long time. You always need to come up with new techniques. You can't fall into a format and stick with it forever, you know? I think that's what's happening in skateboarding and that's kind of sad. It should be more creative. More creativity in video and magazines, I think. That's why I'm going on the Cliche trip for the first time as the photographer. I'm stealing your job.

Please!
This is my first trip not to film at all.

Back to video, the most popular thing in video right now is probably the Berrics. What do you think about the Berrics?
I'm sad for the filmers because they live in California and they never see the sun. Very sad. I'd be bummed to be filming indoors all the time and living in California. It's something you do because you have no choice, normally, because of weather. I guess people have little choice in America because you can't skate too much in the week. It can't be forever. All the skate stuff can't be happening in one little place. It's kind of the opposite of the skate spirit - where you go explore and find new stuff. It's something I think is cool, but you can't do it for a long time. The same place. I think I heard they will take it to the streets?

I don't know. Makes sense.
Yeah, you can't be in the same spot forever. It looks like a good business, though. 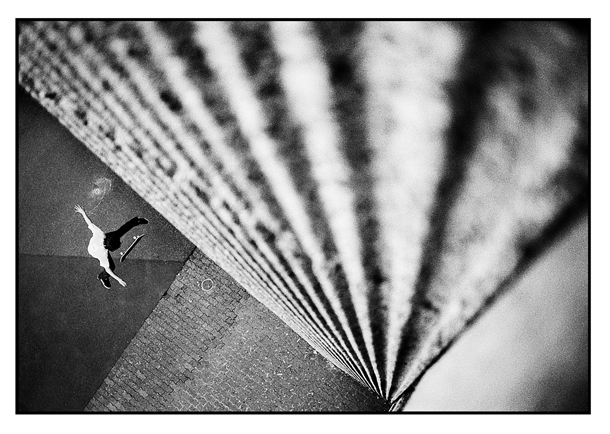 Tell me about your prize-winning photo.
The tre flip of Brophy?

Yeah. The one you shot from inside a chimney.
Yeah, I won the Red Bull contest.

They were a bunch of dicks?
No, they were too young. They were too young for this kind of mission, which was in the desert in Bolivia. They wanted to party at night, but there was nothing. There was only poor people and sand and wind. It was the wrong people. It could have been pretty good. The place was fucking amazing. It's 12,000 meters high, but flat, with volcanos and the biggest salt lake in the world. Yeah, it was beautiful, it could have been amazing, but nothing happened. So yeah, I wasted two months of my life for that.

You could always go back there with Chany and Lambert and set up some bank ramps.
Yeah, like a transworld video? Geoff said he wants to go. Maybe since it's the biggest salt lake and super flat I could bring Joey Brezinski to skate some flatground.

Yeah, bring the best flatground skaters.
I could have a game of SKATE there.

That's the pinnacle.
Exactly. This will be my next project. 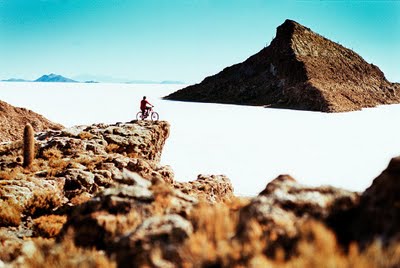 So we started this whole thing because you want to sell some prints through your website, right?
Yes, email me and buy some prints.

Keep in mind our country is in a recession. We don't have a lot of extra francs lying around.
Yes, the prices will be reasonable. Always reasonable for the skate audience.

So, is there anything you want to say to Sheffey?
Yeah. It's ok. It's fine. I don't care. He apologized through Rick Howard. Not directly to me, but to Rick. It's all fine. Is he skating?

Yeah, he's back!
Alright, so I hope he's having fun. 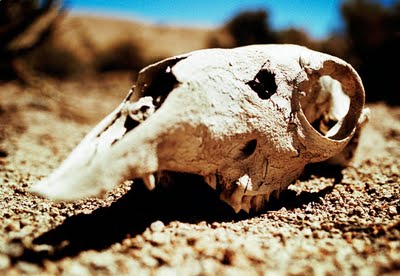