Burnout: Notes from Base Camp

Notes from Base Camp*

*This story originally appeared in the Nov 2014 issue of the magazine. The paper kind. Reprinted here for deadbeats and Unamericans, with my compliments! 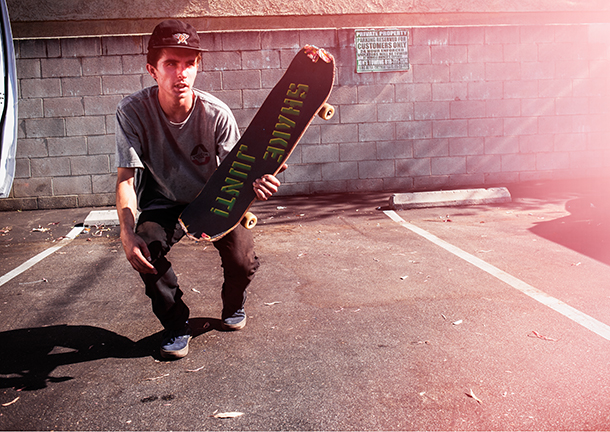 It was just a few weeks ago when I realized I don't even know the name of the upcoming Vans video. While some cultures wait to give their children a proper handle until after their first birthday,(lest they croak and you've wasted a perfectly good great grandfather's name, I assume,) if skateboarding marketing has taught us anything, it's that we can expect a healthy heads up on any full-length, years-in-waiting video release. Wasn't it just a few months ago that Cold War was coming? And think about Fully Flared. Some kids must have started and quit between the first ad and Mikemo's explosive debut.
But those are probably models of the past. Yes, definitely. The dudes in charge of Vans' checker-boarded legacy were tight lipped about the title of the video when I asked, as well as the release date, though it feels like we're getting closer. We're not quite there, but we can see the summit. So rather than take this modest report as any sort of definitive story of the Vans video, consider it more like notes from base camp. The final push is coming, though! It will require oxygen, that's for sure, with Greg Hunt playing the roll of Sir Edmund Hillary; Cody Green, his trusted Tenzing Norgay. If what I've seen over the last year is any indication, things are going to get intense - like clinging-to-that-ice-coated-ladder-with-full-oxygen-tanks-while-a-Chinese-billionaire-blocks-the-way-shitting-his-North Face-full-suit-in-terror kind of intensity.
But we're getting way ahead of ourselves. This bastard doesn't even have a name yet. 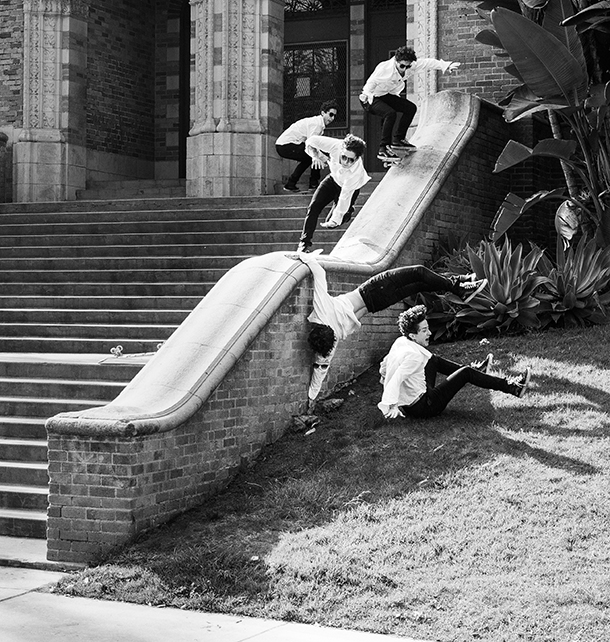 With Dustin Dollin the losses are as amazing as the wins. 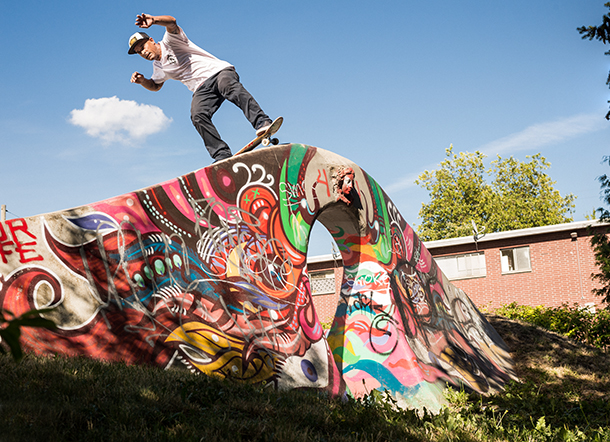 How long has Omar Hassan rode for Vans? Twenty-five years? He's taken those waffles on some wild rides and keeps it going. Boardslide fakie, over the door and down at South Park. 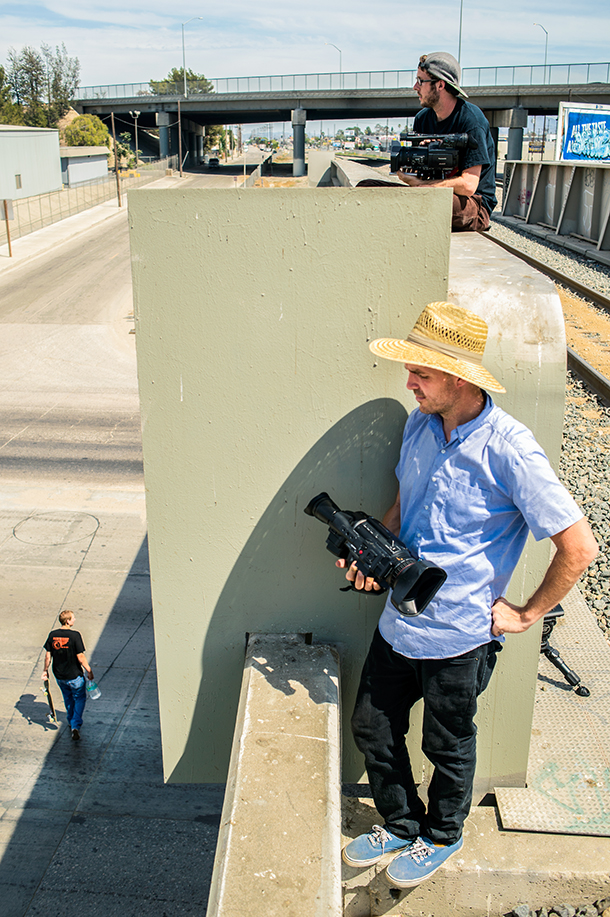 The all-seeing eye, GH is watching you.

Are the kids alright? If you stick with skating past the age of 25 you usually go through a stage where you hate the kids. I know. I did it too. Early-onset nostalgia coupled with twinges of mourning for the carefree days of your teens - all that often gets titty twisted and spun around into you getting mad at the D3 wearers, or the high-def filmers, or the shitty hand planters, or whatever it is that seems to spit in the face of all that you and your buddies once held sacred. As an older dude, and long since having found humor with the vagaries of skate culture, I'm here to tell you that the kids today are better than they ever have been, ever in all of skateboarding's wheelie-poppin' history. Further, let me assure you that some of the best of these youths are going to appear in this Vans video, including Rowan Zorilla, possibly the most alright of them all. Seriously, you're gonna love him, even you old grouches. Especially you guys. 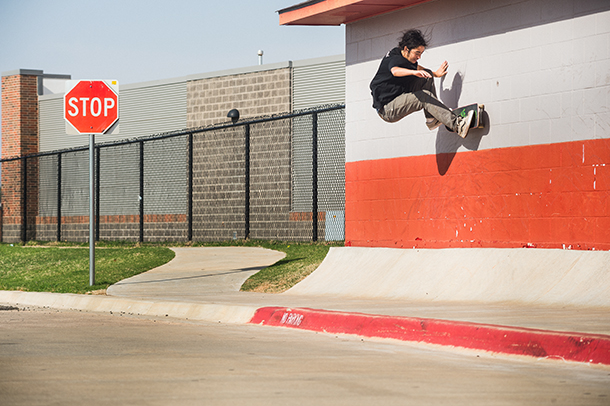 The Kübler-Ross Five Stages of Grief 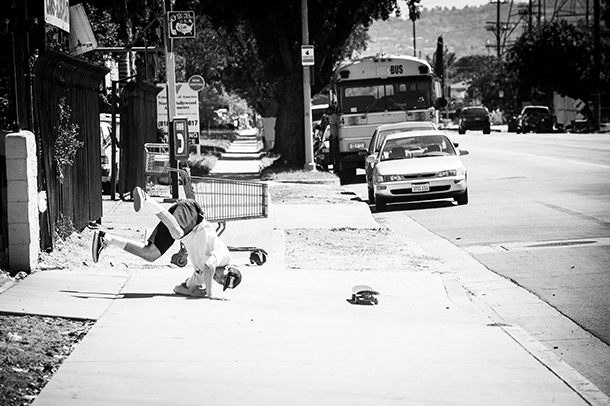 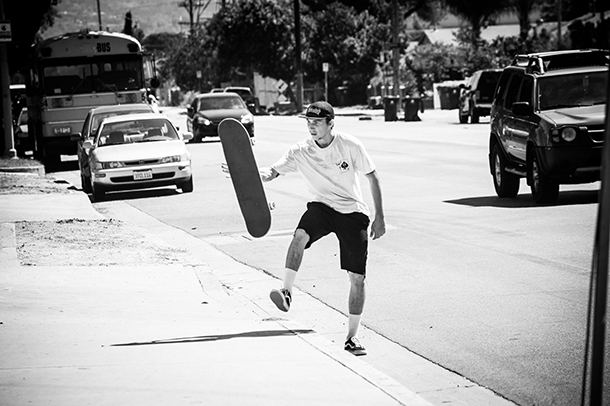 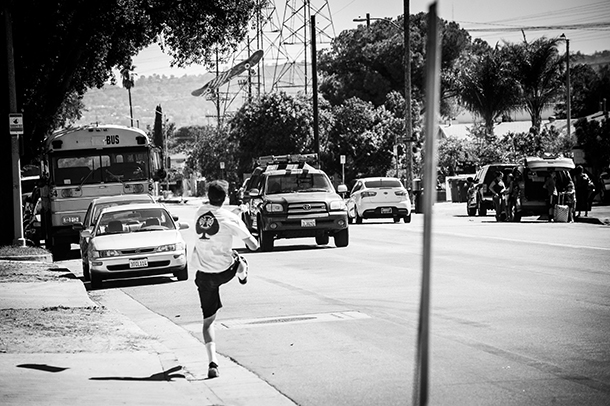 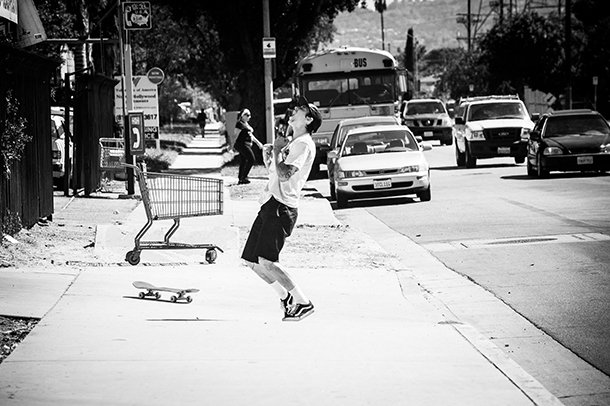 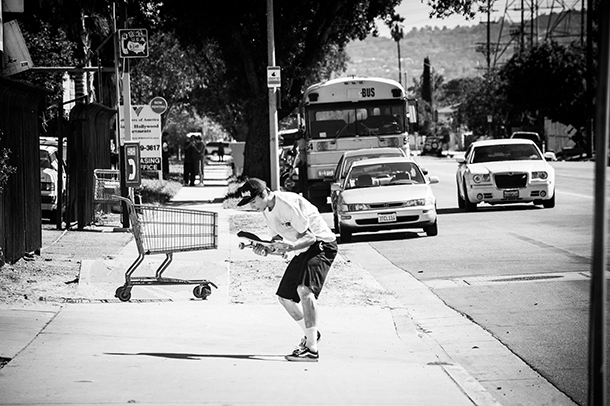 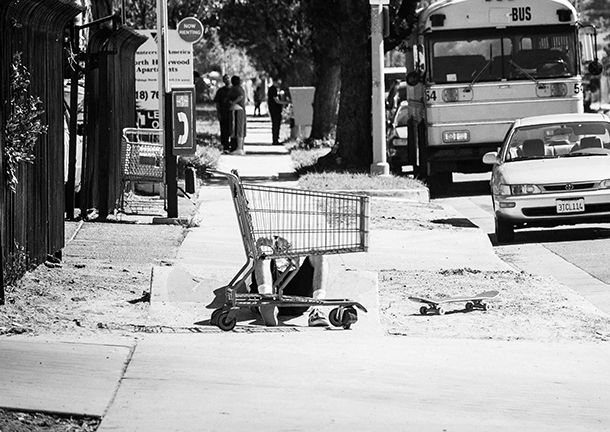 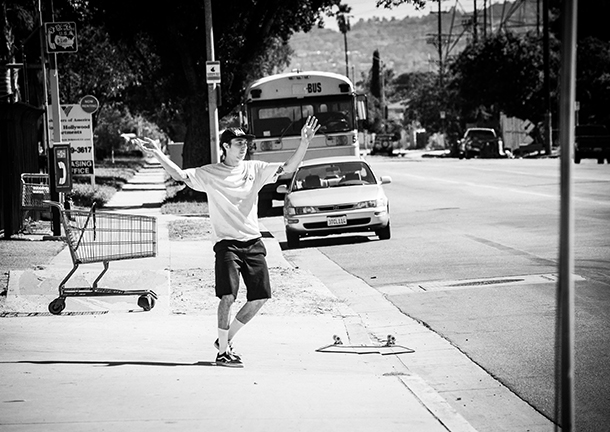 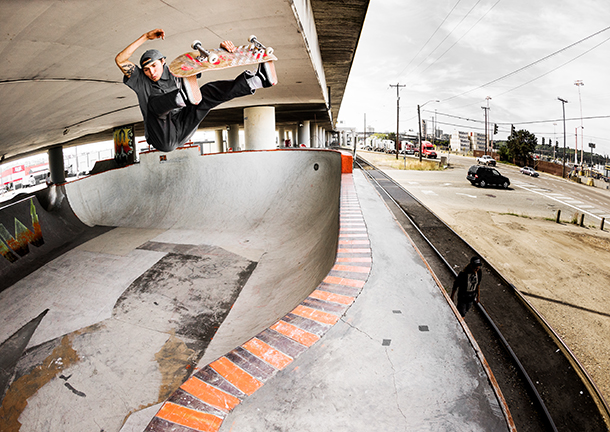 Elijah Berle doesn't want to take pictures. He wants to skate. You do your job, he'll do his. Upstream FSA at Marginal Way. 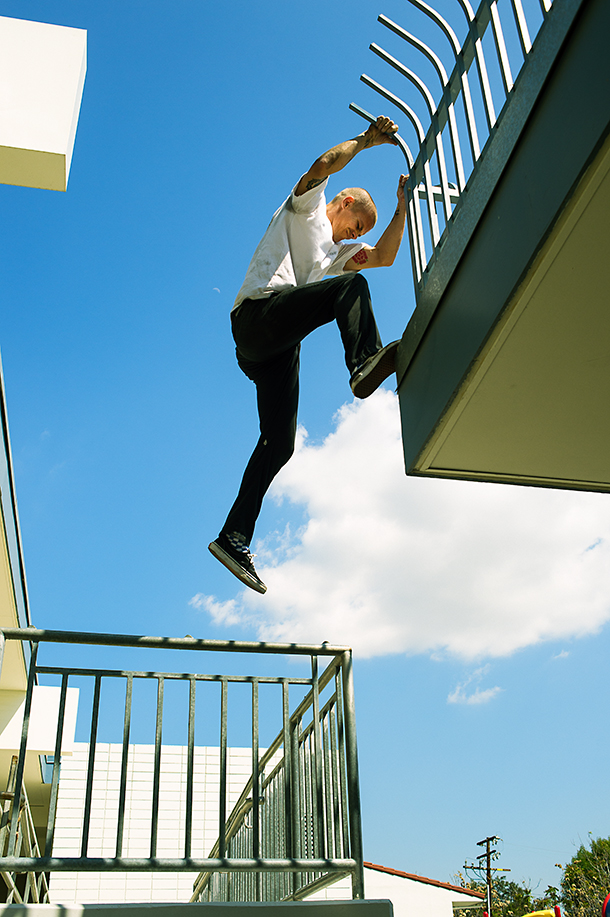 You can't kill Geoff Rowley. You might fuck him up a bit, but he cannot be put down. Climbing off the roof with an exploded kidney.

Anthony Van Engelen is a hilarious complainer. It's not that he complains a lot - far from it. He's actually quite stoic, as professional athletes go. But once he gets going, AVE can riff on a topic as well as Louis CK or Jerry Seinfeld, albeit with better hair and a chin you could split a parking block with. It took me a while to realize that his misery doesn't need company, however. I can bitch with the best of 'em, you see, though my material leans towards doomsday, plane-crashing-into-the-mountain, "We are all fucked!" territory. On a long van ride recently I was steering the conversation predictably down another black hole when he was forced to cry out, "Oh God! What the hell are we even talking about?!"
I need to work on my shred-side manner. I realize this. Why drive two-and-a-half hours to a handrail if the talent is going to be too depressed to try anything once you get there? Sorry, dude. From now on there's only two topics I'm gonna talk about while we're out on the skate missions: the 1980s and pussy. You have my word on this. 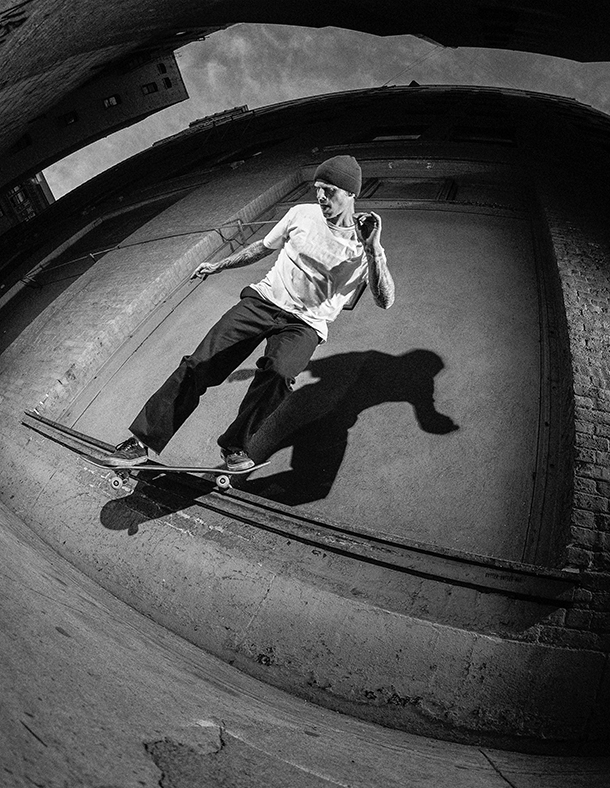 AVE, switch backside smith. Have you seen what Debby Harry looked like in the Heart of Glass video? Fuckin' hell!

Girls cluster to Curren Caples wherever he goes. Like the Coreys of the 1980s, he's got a non-threatening sweetness about him, with skateboarding abilities that give a sly wink to a more mysterious, darker side. Chicks lose their shit around him. I've seen random girls kiss him on the street multiple times, including a brace-faced teen in Paris who didn't even know who he was. Curren is perfectly cut out for this sort of over-the-top attention. He really is a nice young man, more concerned with grinding pipe than laying it. You could totally trust him with your sister. 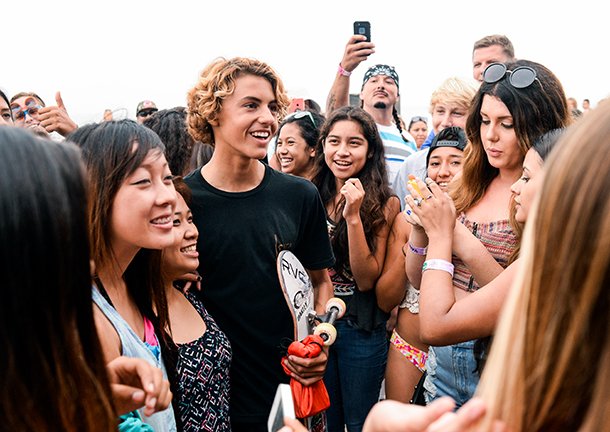 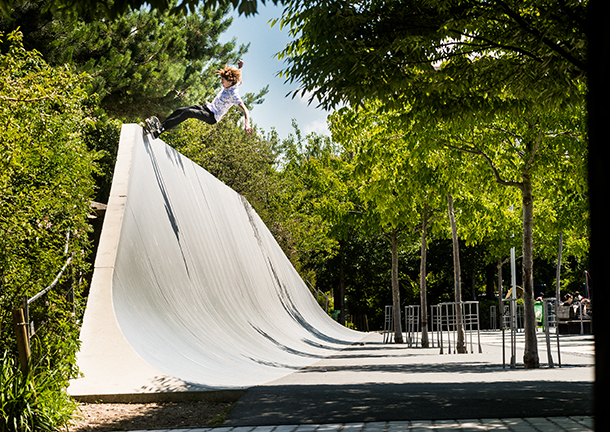 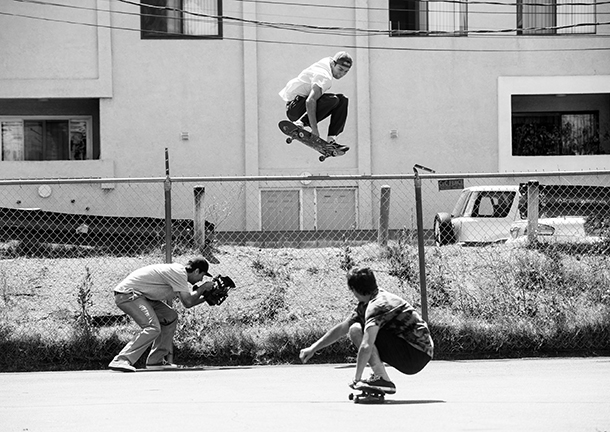 Shit! I would say videographer.

What made you decide to leave your last job and come work for Vans?

I kinda just got lucky to even be able to work with Vans. I was freelance for awhile and Robin Fleming hit me up. It kind of just happened.

Do you want to tell the story about how you got fired from The Berrics?

Yeah, I just really wanted to go street skating. It was all my fault. I was saying I had to go to the dentist and shit like that, just definitely not doing my job as well as I should've been. So I called in sick one day, and I really was kind of sick, but then my roommate at the time, Mike Anderson, is like, "I'm going street skating. Wanna come?" I never got to street skate anymore so I went with him. So I went out skating and of course Berra sees me! He takes a photo of me with everyone in the van. Pretty bummed, of course. Everything's all good between us now, though.

You belong on those streets, Cody!

Yeah. That's where I want to be.

How's Greg Hunt as a mentor? Can he be intimidating?

Yeah, at first he was, working with someone like that - someone I looked up to my whole life. Being able to work with him on something like this is pretty fucking special. I wouldn't say he's intimidating. He cracks jokes all the time. I'd just say he's very good at what he does and it's a special opportunity to be able to work on this with him, for sure. I really can't wait to see what he does with everything.

What have been the highs and lows of this job?

The highs are getting to be with the dudes when they accomplish what they set out to do that day. Just when everything works out! Traveling with these guys and having relationships - I'd like to call all of these guys my really good friends. That's totally outside of work. These guys are my best friends now from all the years we've spent together. Those are the highs. The lows are just driving around, trying to make it happen and nothing works out.

What about when the team van got stolen?

Oh shit! That was definitely a low! That was a harsh feeling waking up and finding your employer's van gone! Good thing there was nothing really in the van as far as generators or cameras. I really didn't see that coming, though I did live in a really sketchy place off Crenshaw boulevard. Shit, it happens. I was shocked though. I got a call from the Long Beach police department a week later all, "We've got your van." They stole the seats but at least we got the van back.

You're known to do whatever it takes to keep the team motivated. How much did you get paid for being whipped with that belt in Croatia?

In reality it was only $40 American but at the time it sounded like a lot of money. Sometimes you gotta do what you gotta do!

Did you hear about the guy who died from jacking off 29 times in one day?

Yeah! I did hear that. That's pretty crazy. I guess it's just a rumor at this point - an urban myth if you will.

What are your top three burrito spots in the world?

I'm gonna have to go with Corrales in Ventura, California. Then Taqueria in Long Beach. Third would have to be Pancho Villa's in San Francisco. Those are probably the best.

Who was your favorite skater as a kid?

There was so many, but to be completely honest I really looked up to Geoff Rowley. That's part of what makes this job such a dream come true. When I was kid he was the end-all-be-all legend! It's truly amazing to get to skate with that dude. Who would have thought? I still fan out! "Wow! I get to skate with Geoff Rowley!" He's still the sickest!

Are you going back to Ohio when this is all over?

No. I don't think there's anything left in Ohio for me. I love Ohio but I don't like winter. I'll be in LA for a long time, hopefully working on videos.

What are your hopes for the Vans video? 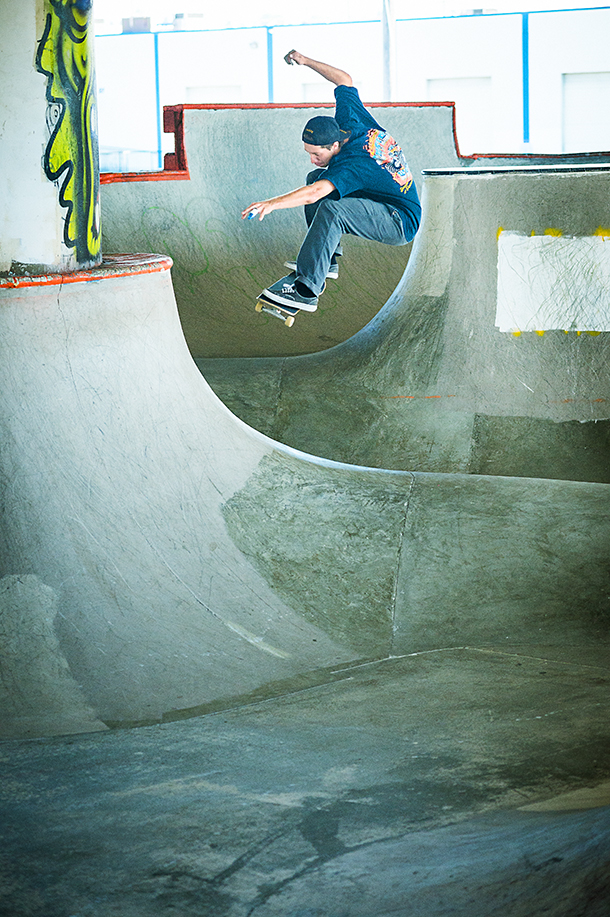 Remember when filmers used to be fat guys? Cody Green charges as hard as the pros; floating the moguls at Marginal Way. 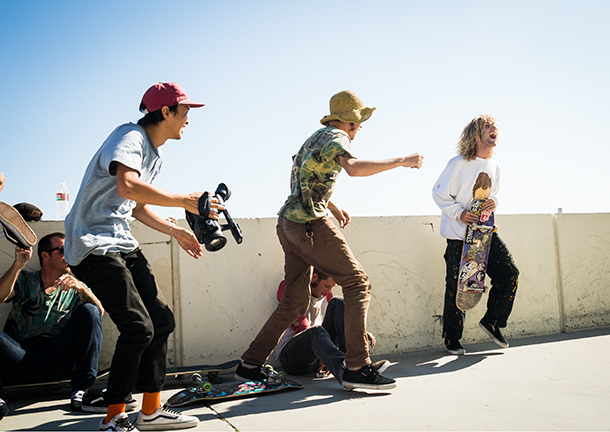 The highs are so high. Let's just think about those.

We don't care if people like what we're doing. Who wants to talk about the X-Games with a dude on the plane? Still, it's cool when the guy who's paid to kick you out gets won over by the awesomeness of it all. It's nice when they're nice, but we're going to keep skating regardless. 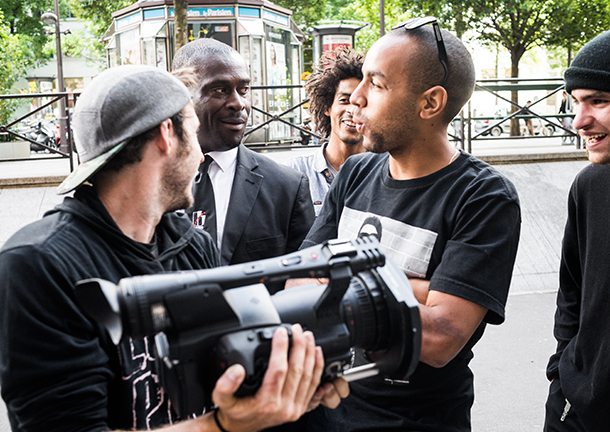 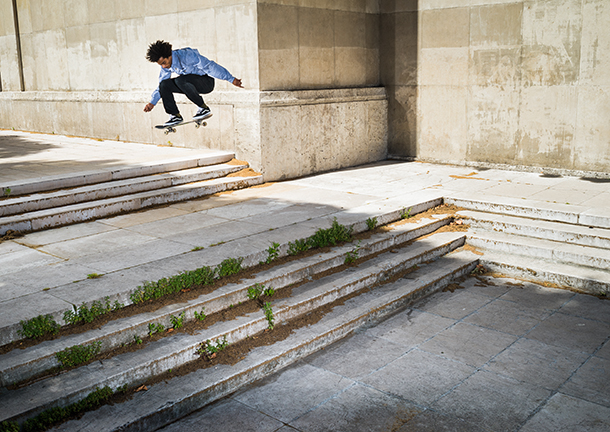