Burnout: The Ten Strangest Covers of All Time

I know, I know. He without sin should cast the first stone. And Lord knows I've floated out some sinful shit in my checkered tenure here at the mag. That said, there's a few Thrasher covers that have always left me scratching my head. In this spirit (and running low on photos of dudes looking at handrails) I present:

Thrasher Covers of all time. 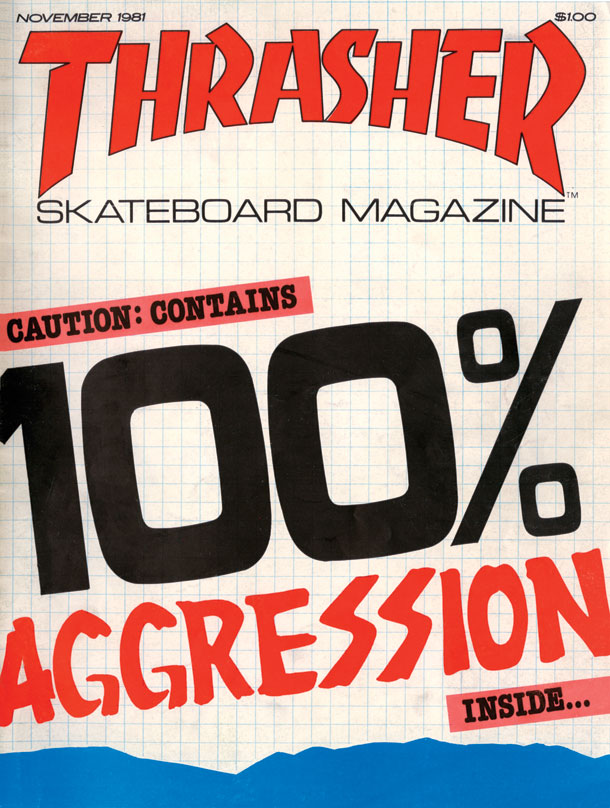 I can only imagine the turn of events that left the then-fledgling editorial team facing deadline with no other option but this. And even though it's actually pretty bitchin' looking, in a "simpler times" context (minus the questionable S's, of course,) I doubt it was their first choice. You ever try to whip up an entire science fair project the morning of the science fair? Yep. 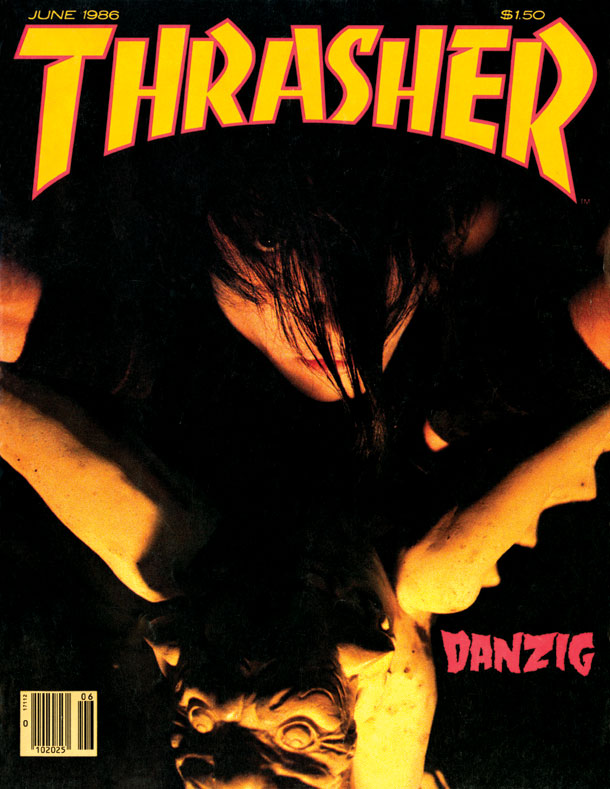 This was the first Thrasher I ever saw; the excitement and confusion of it all gluing me to the floor of a Lubbock, Texas record store as I carefully paged front to back. "What is this?" I gurgled, Glenn glaring back at me through devil lock atop gargoyle. This is still one of the greatest covers, I reckon, but that doesn't make it any less weird. I've always hoped the opportunity would present itself to do another music cover like this, but the exact artist, gliding seamlessly, complimentarily, alongside skate culture has yet to present him or herself. Oh wait. 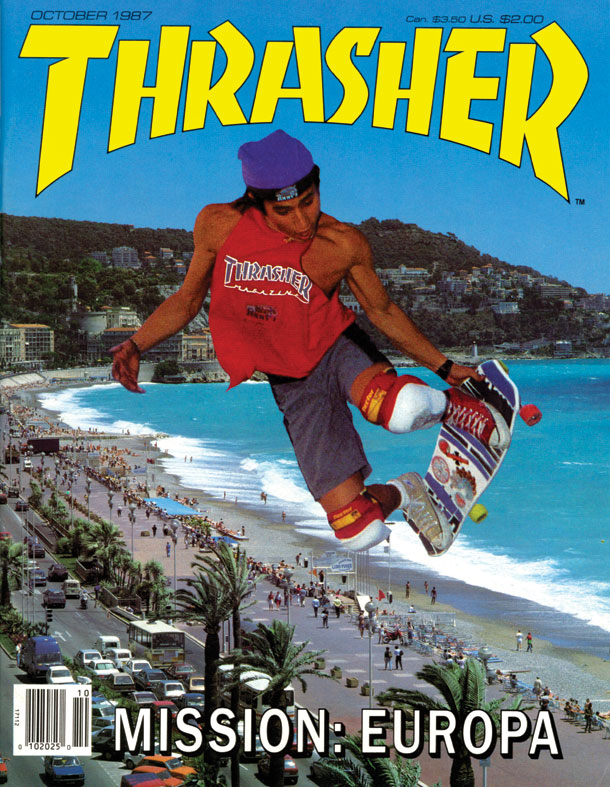 This one threw a lot of people off, mostly because prior to proliferation of skate videos there was a certain level of "what the hell?!" magic involved in skate magazines. I remember staring at photos of Cab and Hosoi flying, three feet above cars in the method position, no launch ramp in sight and wondering "But how?!!!" not realizing they had simply run up the hood and jumped into the air. Therefore, even though this was a photo of Christian cut out and glued onto a postcard, I don't think I was the only kid scanning the beach below, searching for the kicker that had somehow sent the Rocket Man hurling into the heavens. 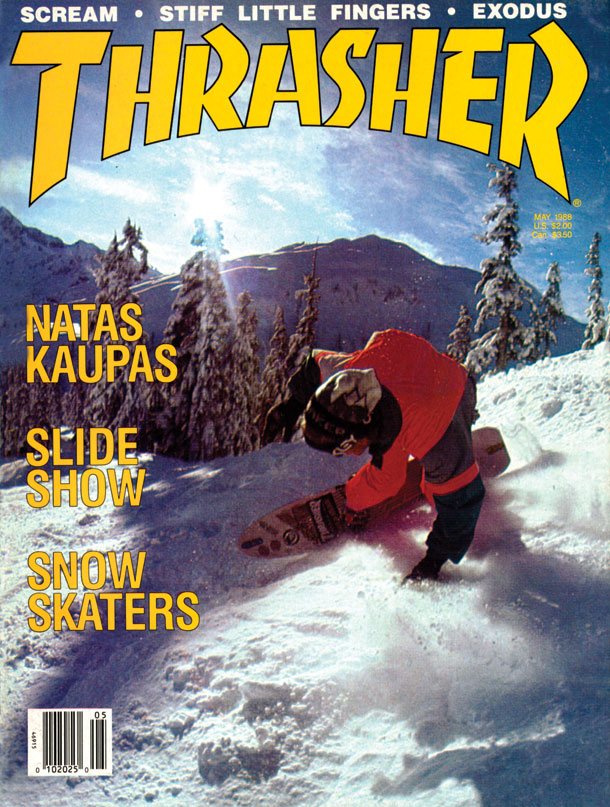 Dave Swift likes to bring this one up a lot, but snowboarding was so novel at the time, I sorta give it a pass. That said, I can only imagine it was sticker placement that pushed the boys to pick this particularly soulful carve in the pow-pow over a more dynamic air shot. If snowboarding was about anything in 1988 it was about arching your back, kicking up your heels and getting into that suitcase method air position. "Wheee!!!!" Shit, I think it's still about that. This is Rob Roskopp, by the way - foreshadowing his multi-discipline extreme sports aptitude years before he led the Santa Cruz mountain bikes program to industry dominance. 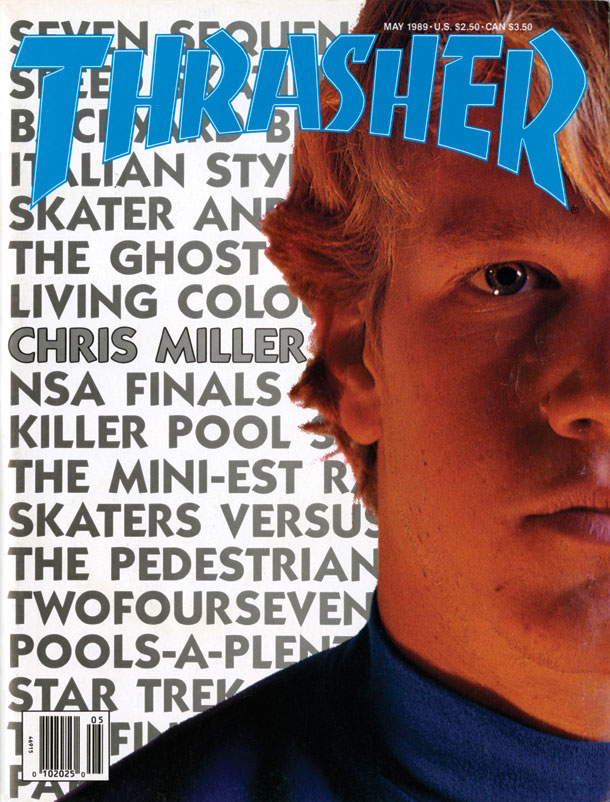 Solid design, if a tad on the busy side, and Lord knows Chris Miller deserved the front (Gullwings be damned,) having recently unleashed his signature moves - the backside lipslide and the crossbone lein. But I can't figure out why they didn't just get a photo of him blasting one of them sons of bitches instead of this bifurcated portrait, which, despite the fact that Miller is one of the few 80s legends still at his fighting weight today appears to be sporting a "party chin." I don't remember Miller ever going through a chunky stage. Perhaps it was a goiter. Did you ever have a goiter, Chris? 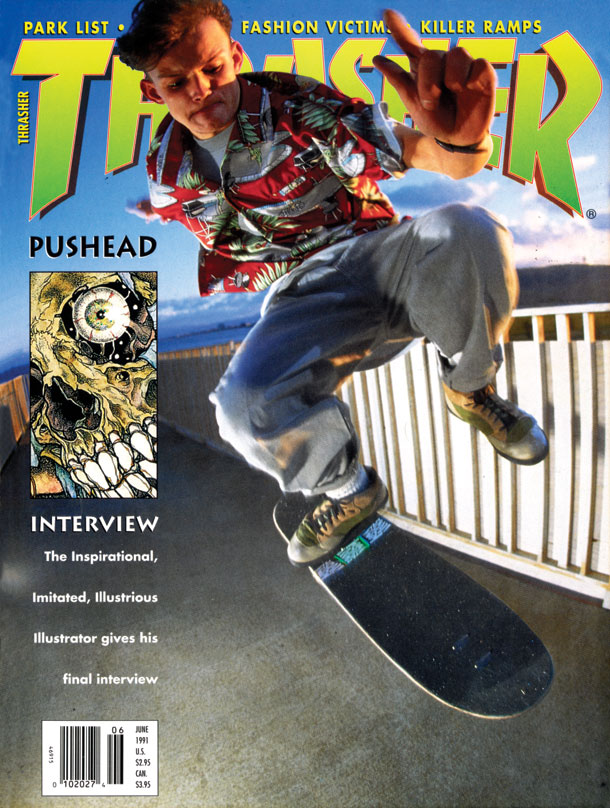 The story is that the boys were coming up on deadline without a cover and the Boss pointed to an intern and told the dudes, "Just go shoot him!"  As a kid, I always thought this was "Magical Matt" the host of Nickelodeon's Skate TV. "Why would they put that dork on the cover?" I thought in disgust. My friends and I could also do better one-footed ollies than this by then, further punching a hole in the mag's authority. At least there was the Pushead interview. 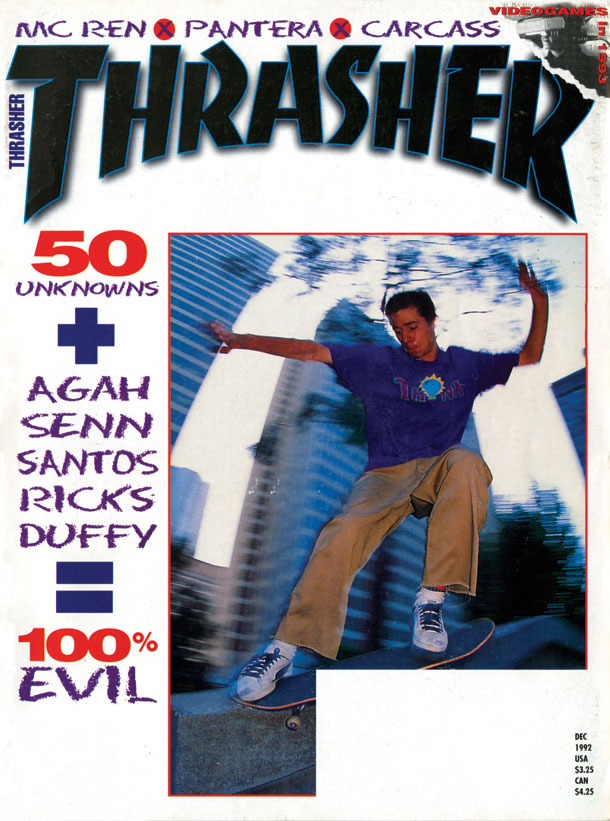 By far the most confounding Thrasher cover of all time. Was this a misprint? An error brought on by the introduction of primitive computer design? Sabotage? Any way you slice it, it's the craziest photo crop in the history of skateboarding. And the tear-away "video games in 1993" in the top corner? Not helping. Rough times. Sorry, Mikey. 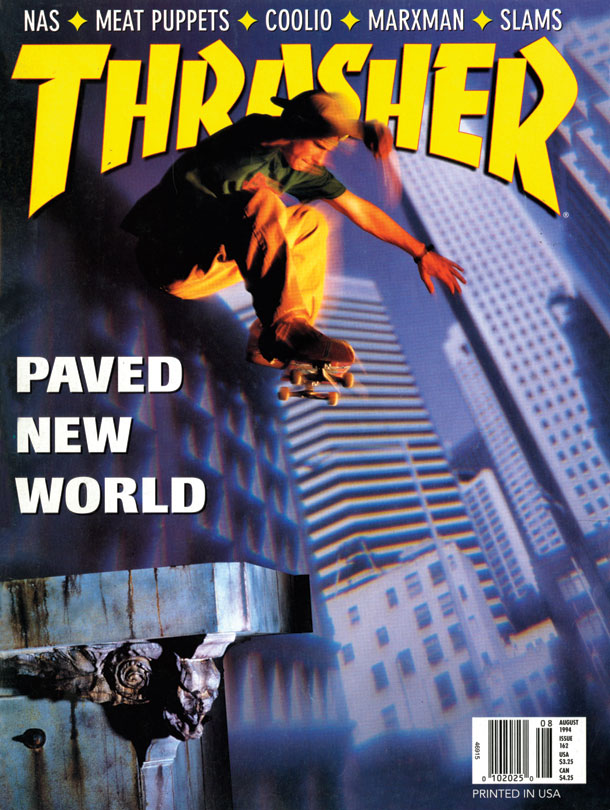 Well into the "show-me-the-make" video age, this fantasy-apocalypse-tinged Pailes front harkened back to the earlier spirit of confusing the hell out of the kids. What's real? What's a dream? While Pat Duffy is grinding giant double kinks, Thrasher's setting up screens at a Burbank soundstage. Available in Spencer's Gifts as a black light poster. And Coolio's in it. 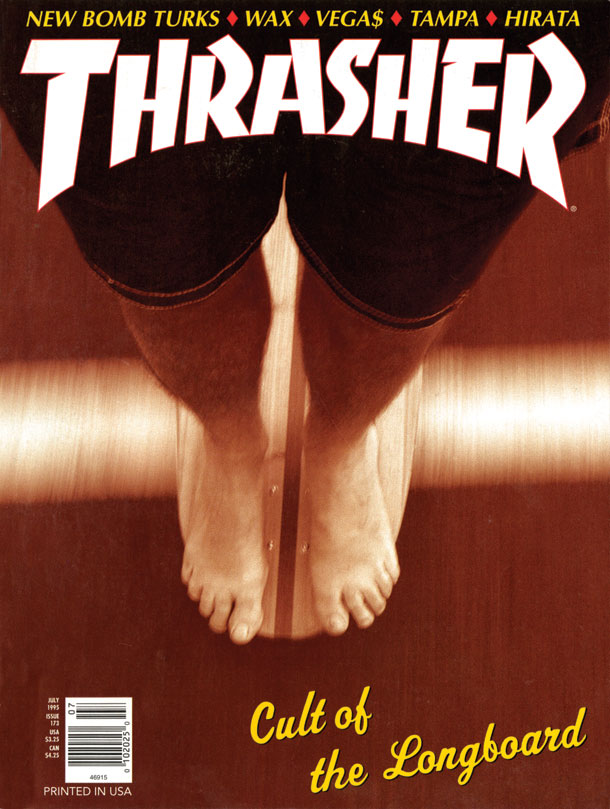 We tease 'em now, but 40-inch-wheelbase sore sports can point to this July '95 cover as proof that their discipline was not always the Rollerblading of the seven ply it is today. Aside from not really hitting the demographic, this cover is excellent - Hirata sky bar notwithstanding. The real reason I point this one out is what lies within - specifically a mean letter Jake ran following what was then my second feeble attempt at skate journalism. When I read it for the first time I almost barfed. For months just thinking about it made me feel sick. This was before it was fashionable to love the haters, so mostly I was just mortified. My old friends from that era still call me "The Sweeper King" with a wink. It was a good lesson, actually. You put something out there, some people are gonna hate it. Ramon Torres never did set the record on Texas straight, though. 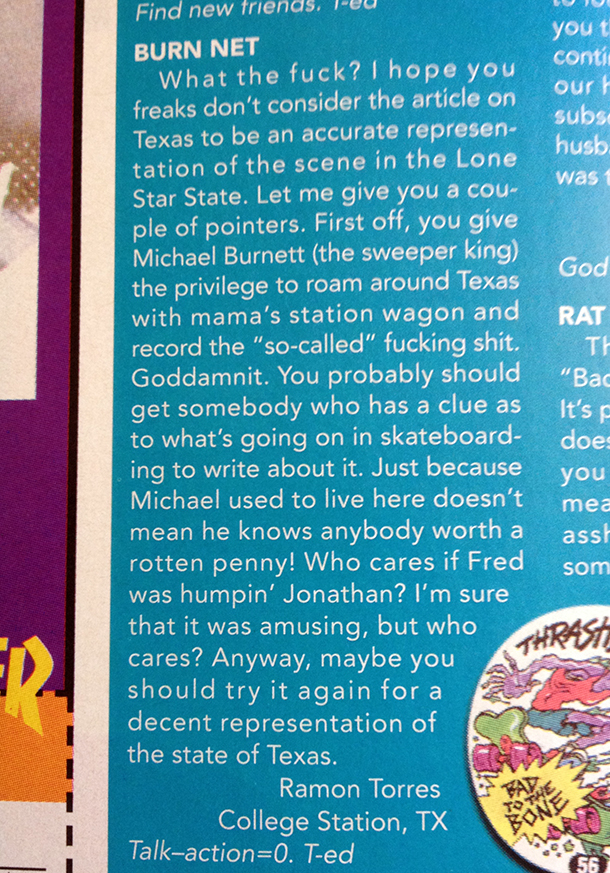 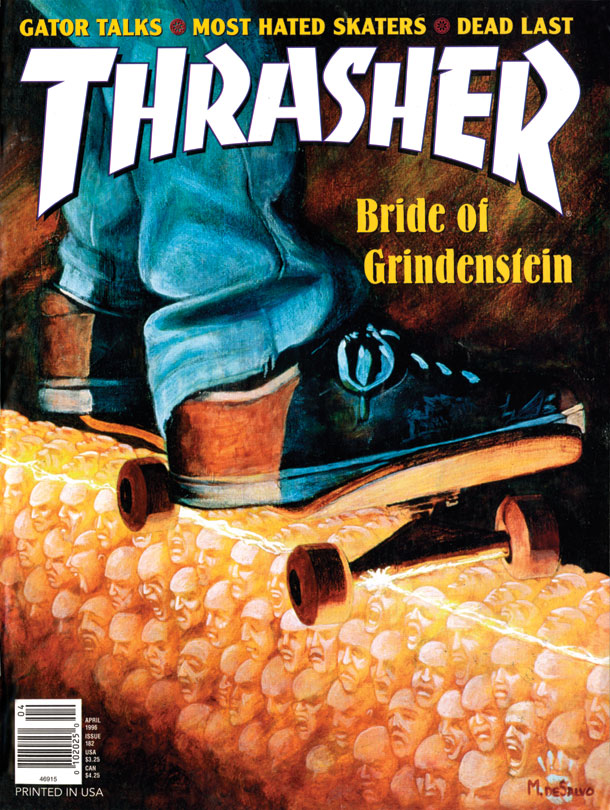 Bride of Grindenstein cover. You know what's the opposite of Mouse, Welcome to Hell, Eastern Exposure 3 and all the other groundbreaking shit that was happening in 1996? The Bride of Fuckin' Grindenstein. Our competitors officially declare victory …. but just wait.