SKATEBOARDING HAS undoubtedly inspired numerous bands and musicians, but very few can say that they were directly created by it. Cobra Man can. Andrew Harris and Sarah Rayne first came together to soundtrack The Worble’s 2017 skate video New Driveway, alleviating the crew’s need for licensable music. The sound was so good that they kept it going, recorded and released their first record within months of the video’s premiere. They’ve since scored another soundtrack for The Worble’s 2018 video Toxic Planet and hit the road playing shows around the globe (with cameo’s from Manramp), pioneering the genre “Los Angeles Power Disco.” They’re the type of band with choruses that will bounce around your head for weeks and even the most introverted of us will consider crowd surfing at one of their shows. The band’s head count has recently increased to seven, adding more power and onstage presence as they prepare to record their third studio album. Don’t sleep on Cobra Man. —Dylan Christopher
Interview originally printed in the October 2019 Thrasher mag 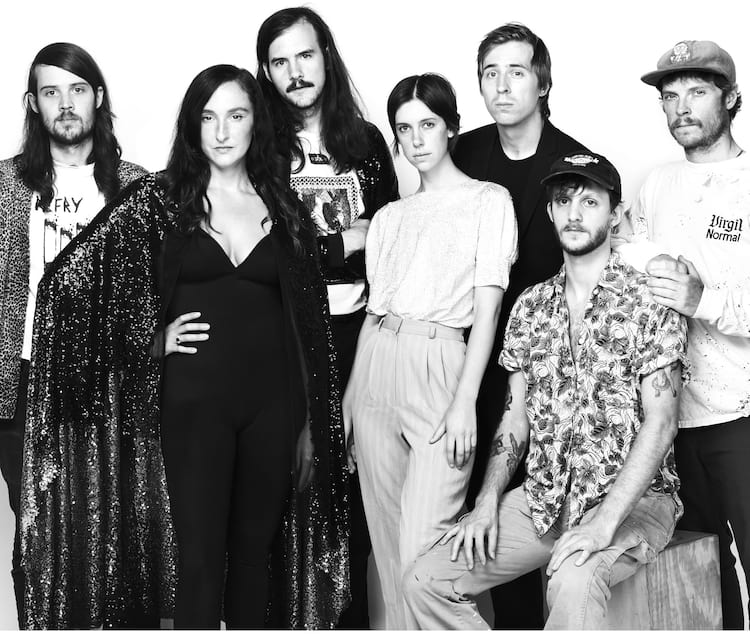 Photo: Bleckley
When and how did you guys start as a band?
Andrew: Basically it started with Manramp, the song because Tom Mull and The Worble needed licensed music so that they could start putting stuff up on Thrasher. Tom asked me to make some music and I made Manramp and that led to more videos and Tom asking me to make more music. Sarah and I had met each other right before that and we had talked about music and disco and stuff like that, so when we wanted to have female vocals for a particular song I hit up Sarah and it ended up going really well. Right after that is when Tom asked if I wanted to make all the music for The Worble’s video New Driveway.

Were you guys watching the progress of the video as you were writing music?
A: We were more bouncing back and forth with Tom about tone, pacing and vibe. I remember in particular when we wrote Fire for Chris “Cookie” Colbourn there was a lot of talk about his style and trying to represent that with the song.

At a certain point did you guys just say to each other, “This is rad. Should we actually be a band?” How did that conversation come about?
Sarah: It came about very naturally. I think it was an easy decision that made sense and a really cool way to start a band. We kind of were just, like, “We should do this,” because it was so fun and it makes sense.
A: It’s sort of a little bit of a leap of faith and really believing that what we liked, other people would like too. Even though it really wasn’t popular at the time. Especially, like, three years ago I remember talking to our manager John Michael and he was, like, “Dude, I don’t think I would tell anyone it’s disco. That has a really bad connotation.” But I dunno, we just kind of believed in it and it worked.
S: And now we have a genre called Los Angeles Power Disco. Or that’s what we’re calling it at least. Ha! 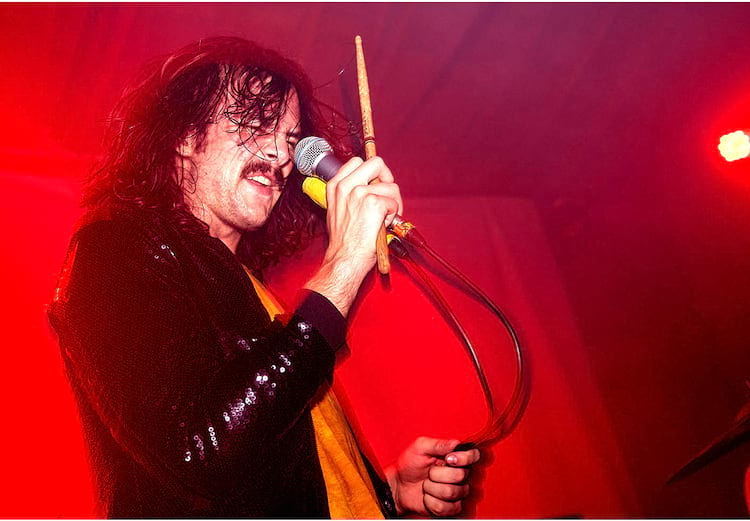 Photo: Hammeke
Whoa, you guys created a genre? That’s heavy.
A: I mean, I just searched and searched through all this obscure music, all this old disco from the late ’70s and early ’80s. I’ve always wanted to find the perfect heavy metal disco band and it just never happened because those two genres historically hate each other. Like, passionately. There was that one night at some baseball game in the ’70s where all these rocker dudes blew up tons of disco records and that’s kind of when disco became uncool. So there’s never been really a true crossover and that’s just something that I’ve always wanted to hear. We keep saying the tone we want to go for on our next record is a biker bar brawl in space. Like the soundtrack for a bunch of Hells Angels having a bar brawl, but in space. That’s the energy we want to evoke.
S: We want it to be out of control and a huge spectacle with the live show and with the next album. Just everything we’ve ever wanted to do, we want to just go for it.
A: We are definitely being shamelessly grandiose. We’re leaning into all of our guilty pleasures at one time, which some people think is corny but I honestly just don’t give a shit.

Yeah, I mean, your guys’ live shows seem to be a huge part of who you are as a band. Do you ever plan any of that out?
A: The first show we ever did for the New Driveway premiere, Sarah and I had only practiced one time all the way through. I think we finished the album the day before the premiere. We stayed up overnight two nights in a row finishing everything and I had no idea if people were going to like it, but we just went out there and played the songs. Aside from our last show, that was probably the craziest show we’ve ever played.
S: Yeah, I remember looking at Andrew and being, like, “Holy shit, I didn’t know you would do something like that!” You can’t even help it at the show, though. The music and the energy of our fans just takes over.

I mean, but there was a little thought that must have been put in, because a full-size Trojan Horse came out at that show...
A: Wait, was that at the New Driveway premiere?
S: Yeah!
A: Ha! Okay, yeah, so we did plan that.
S: Like, “We don’t know where that came from!”
A: Alright, maybe I should talk about the Trojan Horse. So me and all The Worble dudes had this warehouse in Glassell Park that we lived in for about a year. We started throwing these DIY shows that were just insane. Five or six-hundred people would show up and we would just encourage them to trash our house—spray paint, knock holes in the wall. Someone broke the toilet one time. The Cobra Man live show idea is almost an extension of those warehouse shows. For every show we had, we wanted to have some sort of weird, Alice Cooper-y art installation. And it started off with us building this really shitty Trojan Horse out of wood and paper. We pushed it out into the crowd and people tore it to shreds. I think the legs broke off right away, so people were carrying it on their backs. And for Halloween we built a guillotine and we cut Dave Mull’s head off. For another we built a giant pigeon that shit out confetti. It was just ridiculous. So moving forward with the Cobra Man shows we kind of wanted to keep that tradition going and that’s where the Trojan Horse came from. 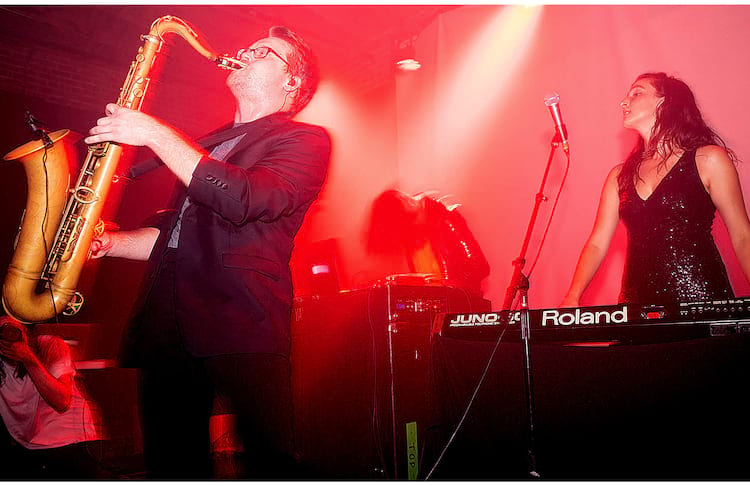 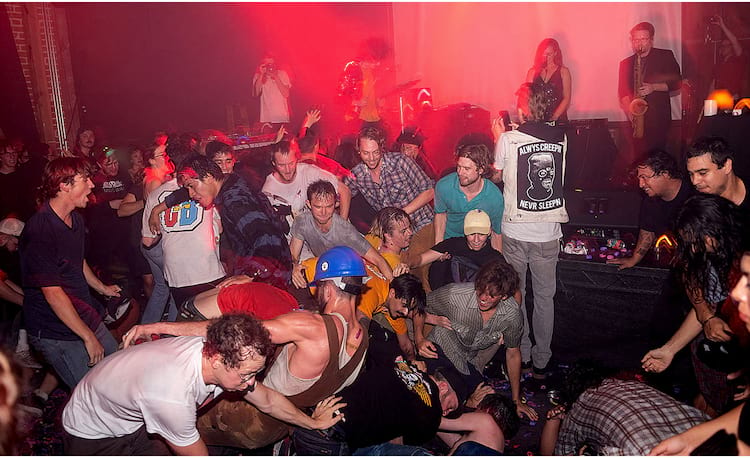 Photo: Hammeke
Awesome. So what’s next?S: Well, we’re currently working on the next album and then we’ve got to take it on the road—doing bigger shows, getting out there. A: We’re going to release a standalone record and then The Worble is working on a Manramp series for Thrasher that we’re scoring. Then they’re also going to put out another full-length that we are going to soundtrack. Also, we want do a full tour for the standalone album.
I wonder if you guys are the first band that was created out of a skate video.
S: Yeah, good question. I think we are?
A: I know Lemmy and some dudes scored a skate video, but it was a bit different than what we’re doing. Skating has definitely influenced the energy of our music. Like when we set out to write a song, skating sort of sets the bar and the level of energy that we put into it. Obviously we would never want to take the energy of a skate part down, we’re always trying to bump it up.

Let’s just go ahead and say that you are.