Honor Roll 2020: The Top Women and Non-Traditional Skaters of the Year 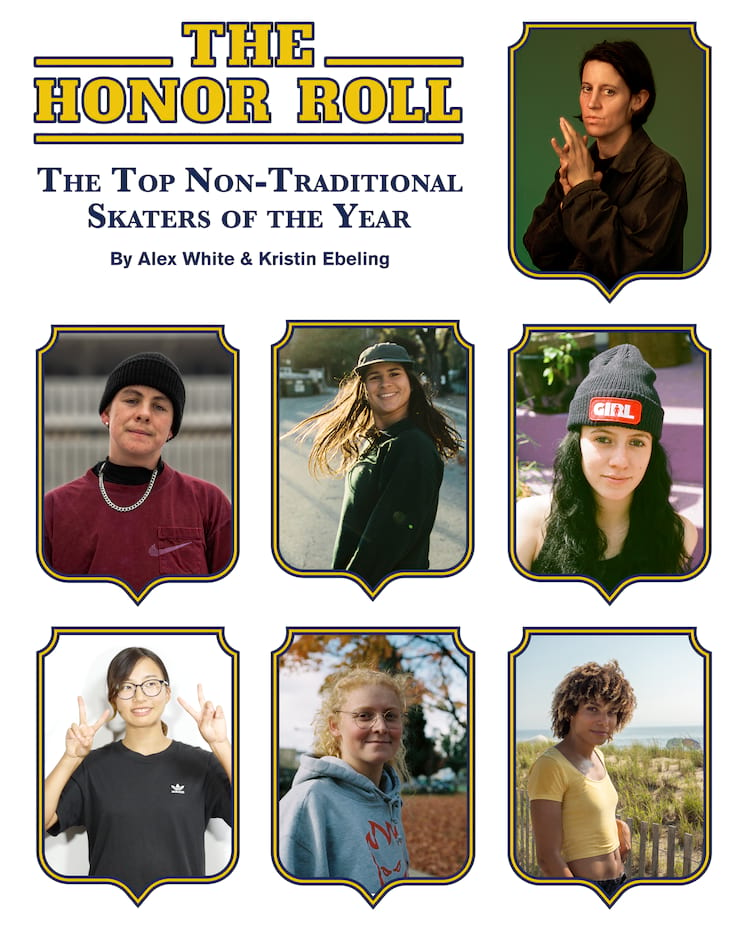 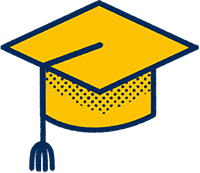 As much as we all wanted to clear the last 12 months with an eraser, there were actually some historic happenings you won’t want to forget. So grab your highlighter and take some notes on the class of women, trans and/or queer skaters who refused to drop out in 2020. Here are the non-traditional skaters that got the highest marks this past year.

Nearly 20 years after her debut in PJ LADD’S WONDERFUL HORRIBLE LIFE, not only has Alexis Sablone proved to be the most normal out of her counterparts from that iconic video, recently she's also been the most productive. Damn-ass 2020 could not put a damper on this dapper lady. She stormed into the year with her own Thunder truck and shortly thereafter took a trip to the nurse's office with a case of Coronavirus. Post recovery she put out her own self-filmed, edited, scored and animated video part, and then launched her Cons shoe that benefited the NAACP Legal Defense Fund. The final months of 2020 definitely seemed to be quite the Golden Hour for the seasoned vet, as she Seized the Seconds and found herself making it to the final voting round for SOTY. One might even say she had a year that was Alltime.

The heelflip heard 'round the world, Alexis took Paris and 2020 by storm

Leo started off 2020 by sharing their new name with the world and spent the rest of the year making sure you damn well didn’t forget it. They released a Nike SB capsule, joined the cast of Tony Hawk's Pro Skater, launched Glue Skateboards, wrote a book, put their name on some Bronson bearings and raised cash for Black Trans Travel Fund. It’s clear they're here, they’re queer and they don’t give a fuck about the rules! 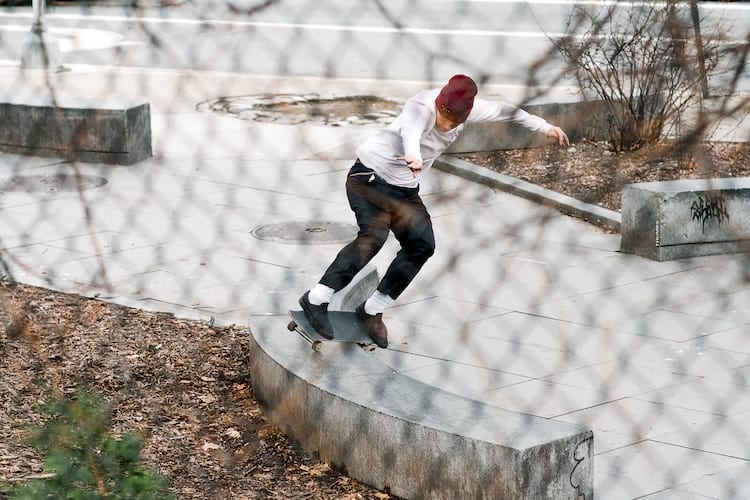 She didn’t get to hop onto many podiums this past year but Mariah did end up on kinked rails in a Thrasher interview instead. Along with her BFF Jenn Soto, she jacked the jock’s gym bag to put out some solid footage in her signature adidas sneaker and even got creative with the Meow Team on the tail of 2020. 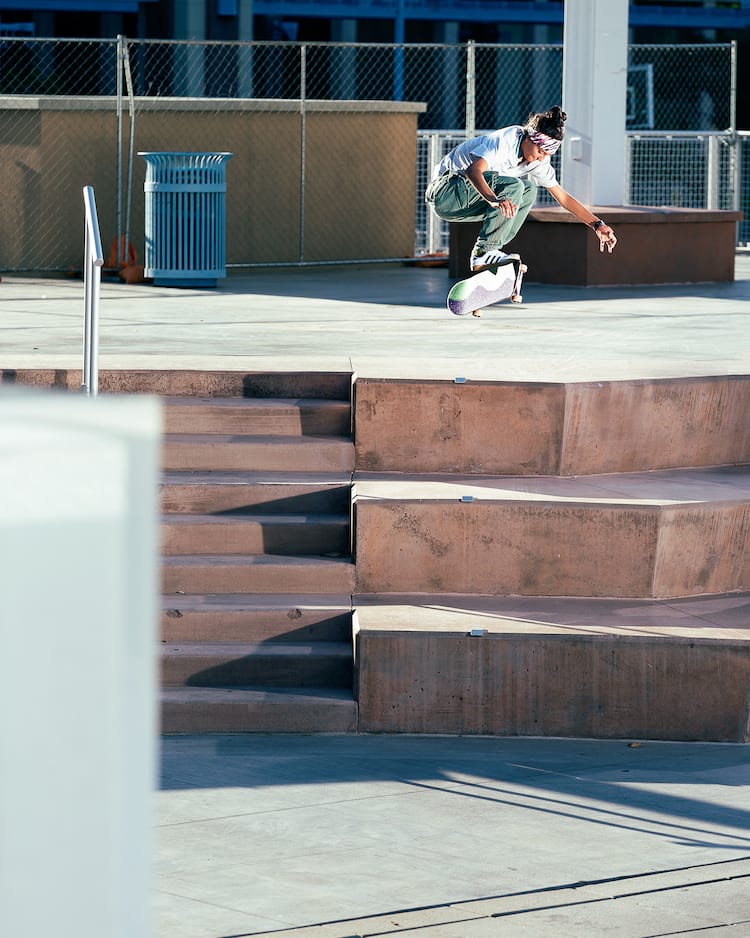 Samarria Brevard kept her head in the books this year with a Thrasher interview and a Thunderous kickflip ad. She also came through with sick photos in a Solo feature and even put out some music too! Being the first Black woman to have a video part and also a pro board, this pioneer’s sure to boost over a few more barriers in ‘21. 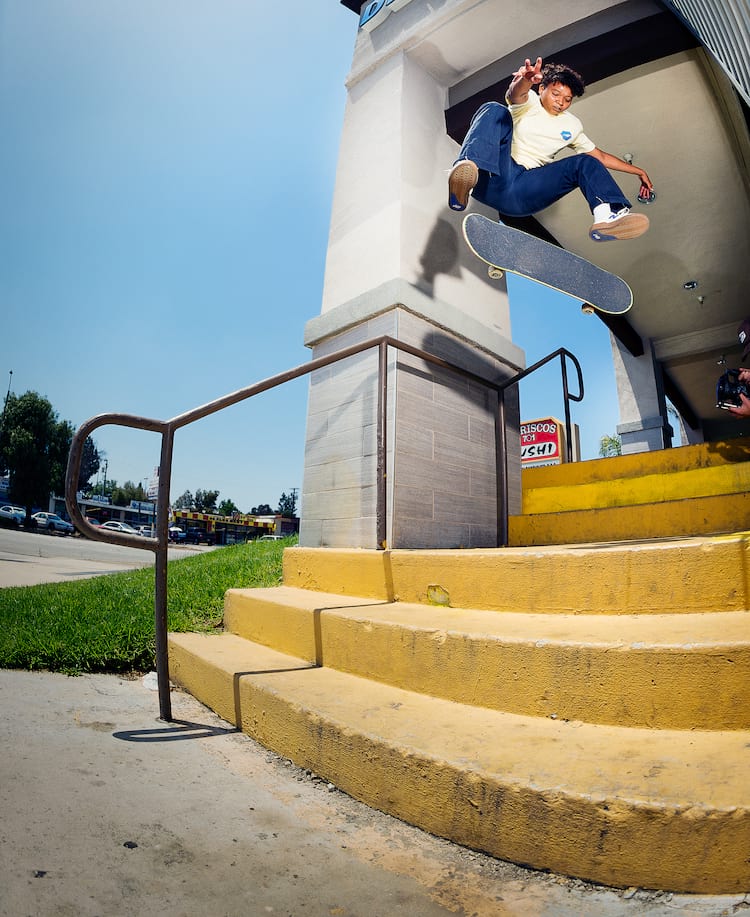 Floridian Fabiana Delfino joined the foreign exchange program this year as she kept it chill with the Credits crew up in Canada. Even though 2020 wasn’t full with Santa Cruz’s heavy tour schedules and filming missions she still unleashed a steady stream of footage that included a full video part, a True Grit documentary and exciting clips from Europe to Argentina. To top it off, she proudly pinched 5-0 to switch crooks in her new signature Sk8-Hi!

Marbie Miller was the hot new girl at school. She started 2020 with an appearance in perhaps the last international montage, then entered into a long-term relationship with Krux and turned pro for There Skateboards. 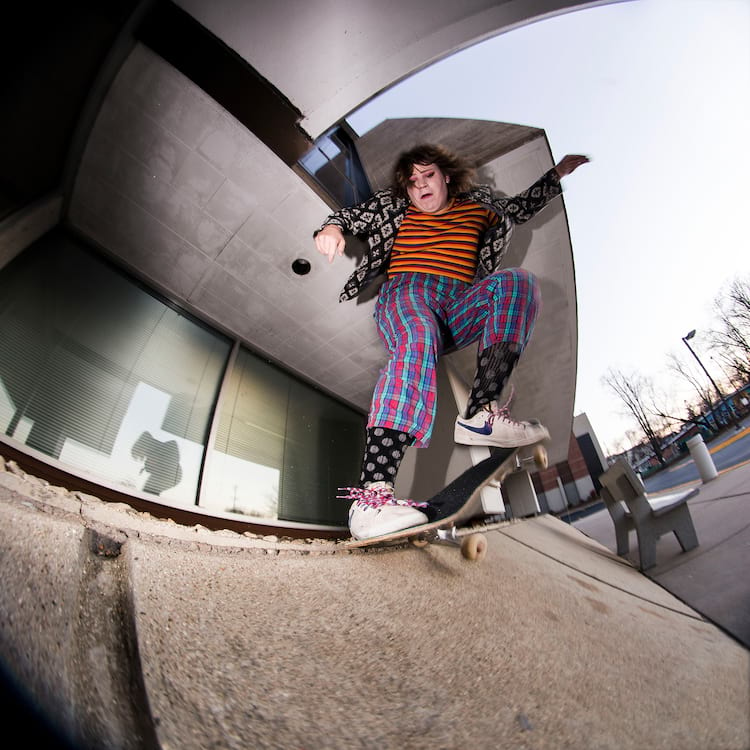 As if Cher was going to let 2020 slow her roll, she sat down with Grosso for the iconic Love Letters to LGBTQ+ episode, stuck it to the haters in Glue Skateboard’s Smut and worked with Vans to donate $20K to Save Lyon Martin Health Services. Cher also debuted her Vans colorway and mall grabbed in the name of Gucci. Up the punx! 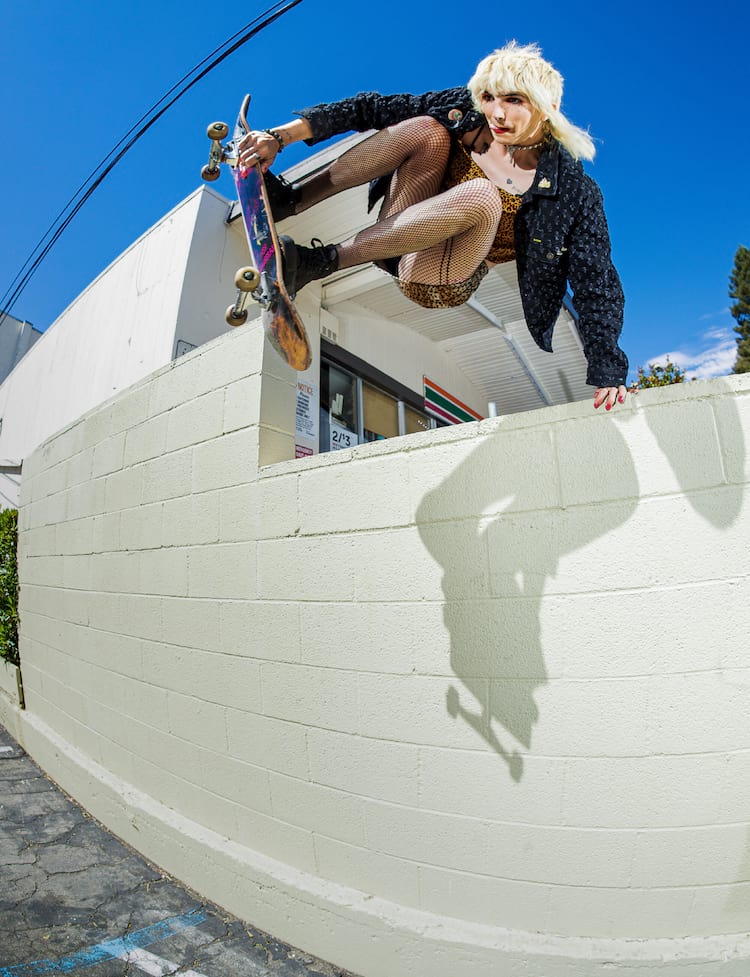 Never lookin' for a handout, Cher put the handover to introduce Glue to the world     Photo: Carabarin

Soto linked with the homies, clipped up for the launch of her adidas shoe and kept on stylin’ and smilin’ all year long.

You could call Breezy this year’s coverage girl, since she had interviews with nearly every outlet possible, from The Bunt to Bigfoot. After the grinds were counted, she found herself on the SOTY nominee list. All the hype for this Canadian is well warranted given her performance on the Am Scramble, the stunts in Nervous Circus and her curtain-closer in Credits. 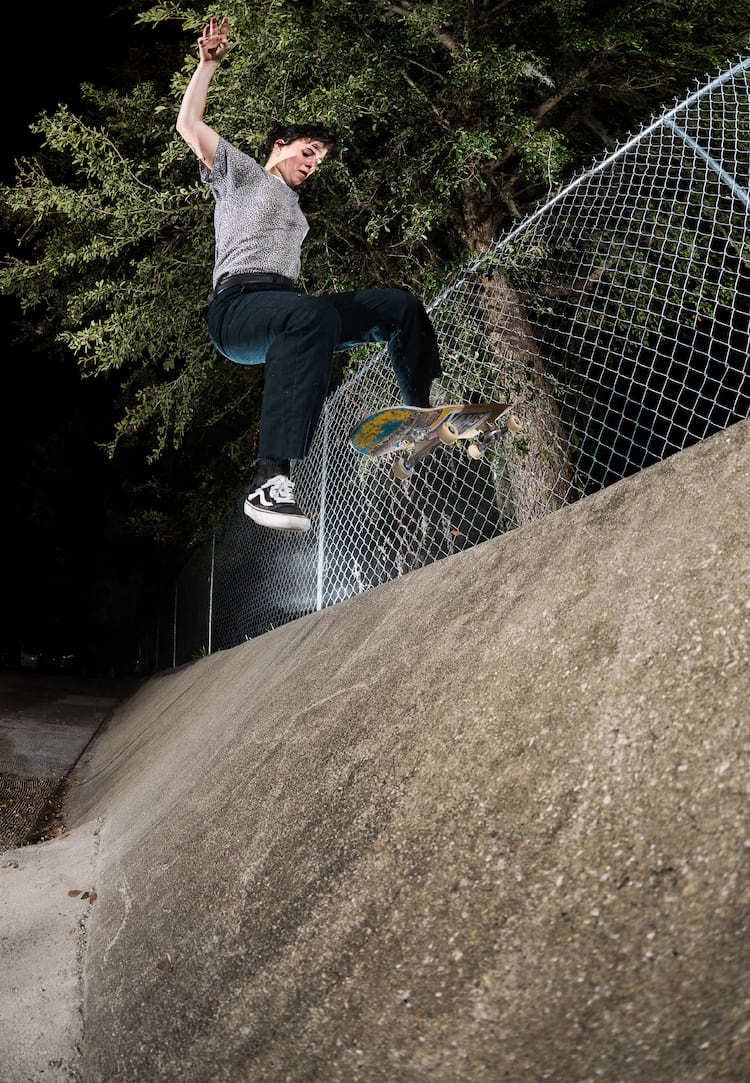 No-comply noseblunt on the Scramble. Breezy can hang in any van     Photo: Burnett

Far more than just an Instagram skater, Farrar's a genuine star. She put out great clips all year, opened up Credits, shot a Spitfire ad and also raised money for a local BIPOC therapy fund. She then stayed busy behind the scenes with her Pansy Cam montages and shared some filming tips with the world. 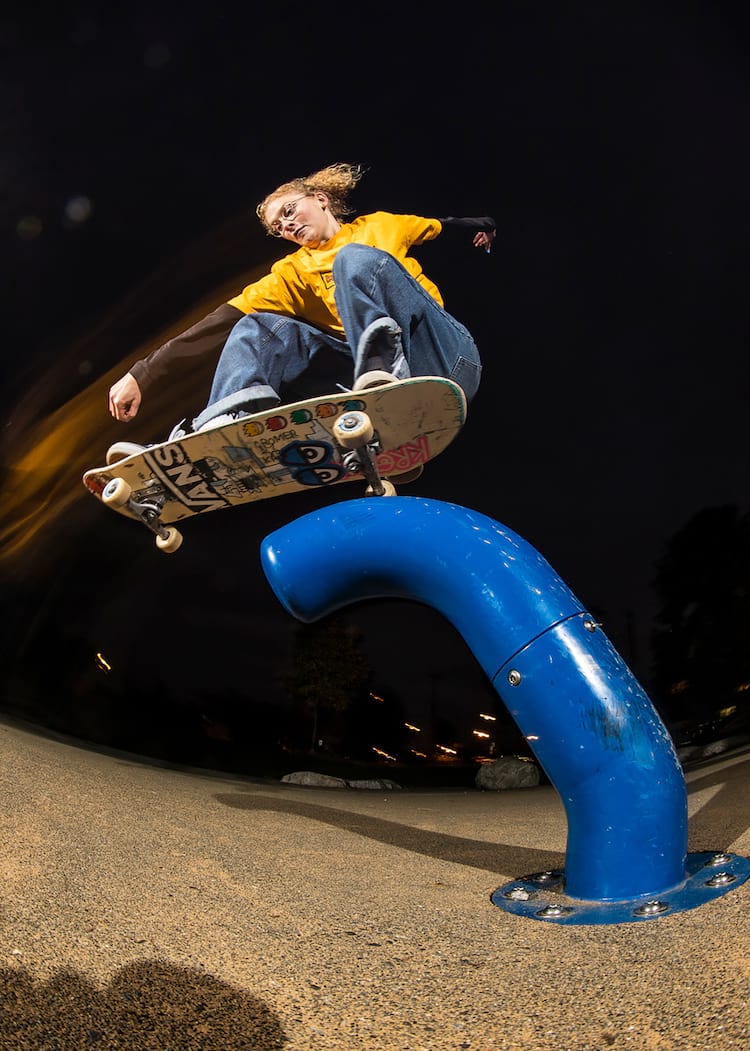 This shredder was truly a pleasure to have in class. Beatrice cut up the curbs in a cruisy part, got a cover, laid down moves in Credits and designed her own Vans colorway.

This force of a freshman crushed it on the contest circuit and showed us that she doesn’t slack in the streets. As she came back from hand and ACL surgeries in 2019, she released two full video parts that included Yuri Murai’s ReStart and her first-place-earning Exposure piece. The year-round tear continued as she won the Urban World Series video contest and posted tons of sick clips in between. We hope she keeps Nanak-ing it out next term.

Nanaka earns her Exposure trophy with a kickflip into the hill

This bandana-rockin’ ripper pushed herself out of NoHo plaza and proved to the world that her bag of tricks ain’t limited to the skatepark. Fresh off her fame from Book Smart in 2019, she put out clips in the Miami Nike vid, a little homie vid and most notably Deathwish Skateboards’ Uncrossed. 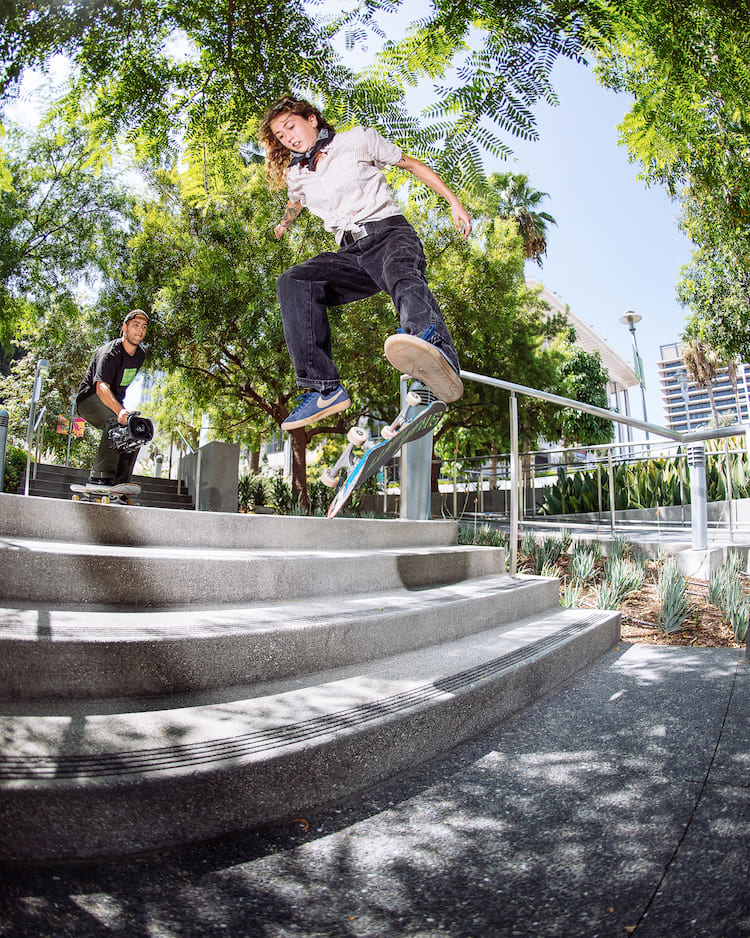 Everyone’s favorite exchange student had one a bloody hell of a year. She started with a few killer tricks in Credits, then continued her run that ended with a cover and interview in Grey Skate Mag. Finally she wrapped it all up by turning pro for Poetic Collective.

Droppin' bombs in her Credits cameo

First of all, Sky Brown literally came back from the dead which was a feat in and of itself. Upon her return, the vert prodigy had no chill as she aired the shit out of Elliot Sloan’s mega, got a pro-model Barbie doll and put out a music video for her song that asks, “Ya’ll mind if I hit a 540?” Sure, we guess that's better than joining the dance team?

At the beginning of the year, Arin kickflip front tail bigspinned her way into the hearts of skaters across the globe. The breakout clip and the feed that followed caught the eyes of bros, brands and bigwigs alike. More recently, she stacked some NYC clips with her friends at Krux Trucks and left us all super eager to see what she’ll put down in 2021. 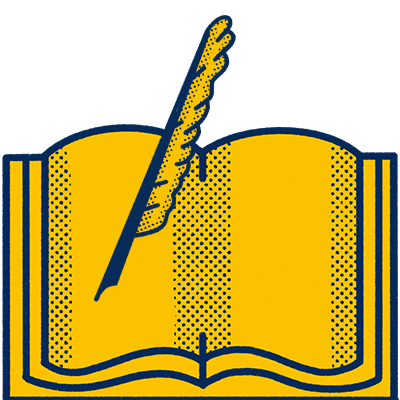 There were so many behind-the-scenes changes to the skate world in 2020. Artist and ripper Jeff Cheung launched There Skateboards and was backed up by the birth of Glue Skateboards from his friends Leo Baker, Stephen Ostrowski and Cher Strauberry. Jessie Van Rouchoudt of adidas partnered up with Unity for their first gender-neutral clothing and shoe collection and helped out with the signature kicks for BFFs Jenn and Mariah. Longtime skater Ashley Rehfeld made the jump over to Deluxe as their new Brand Marketing Director while co-author of this article Alex White, Brand Manager for Krux, became the world’s first Women’s and NB Rider Relations Manager over at NHS. Fellow skate-writer Kristin Ebeling turned pro for Meow after she put together the Vans Depth of Field virtual workshop series with Credits creator Shari White. Amelia Brodka successfully took the annual Exposure Contest virtual this year. Rose Archie launched Nations Skate Youth, a non-profit that aims to create a positive social impact through skateboarding and empower indigenous youth. Then assisting the social skate beat, Karlie Thornton and L. Brew of FroSkate organized the enormous No Brakes BLM protest in Chicago this past summer. Take your hats off for these leaders.