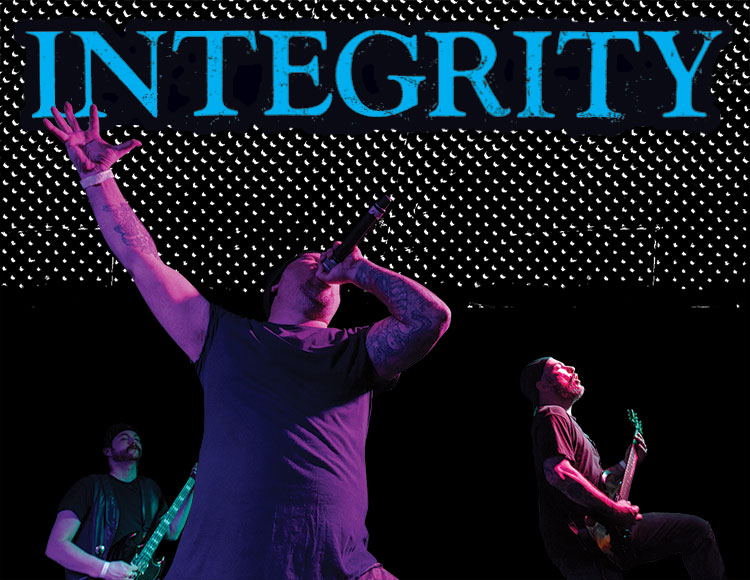 What can be said about Integrity that hasn’t been said a million times already? They’ve been relentlessly kicking ass and taking names for 30 years. Thrasher caught up with founder/vocalist Dwid Hellion at his home in Belgium shortly after returning home from this year’s Death Match in Texas. —Aaron Schmidt

How did things go for you guys out in Texas?
Dwid Hellion: We had a great time. A lot of people came out to the show. We hadn’t played Texas in a few years, so it was great to be back.

Where did you grow up?
I was born in Indiana and I grew up in Louisville, KY. That’s where I got into skateboarding when I was a kid. I was into heavy metal music like Quiet Riot and Mötley Crüe in, like, ’84. Thrasher had a music section back then called Igor’s Record Collection and Pushead did the Puszone. That’s how I found out about punk and hardcore music—from reading Thrasher. You guys are responsible for ruining my life. Ha!

What’s your personal meaning behind the band’s name?
Well, in my opinion, the word integrity means to stand up for what you think is right. That’s what I think the band represents: to stand up for what I think is right. That doesn’t necessarily means that it fits in with what everyone else in the world thinks is right or wrong. That’s how it goes from my perspective and that’s why I used the word integrity at the time. Integrity is just one of those punk-sounding names that meant a little bit more than just saying gory guts, or whatever. But at the same time, the name can be misconstrued as being almost a parody since a lot of the lyrics we deal with touch upon more evil or darker-type subject matter. It creates a nice bit of conflict and friction.

How old were you when you started the band?
I was 16 and was living in Cleveland, OH, in the late ’80s. The first guys in the band were part of our skate team, but it was more like a group of friends than an actual team. We weren’t organized or anything and we called ourselves Team Playboy because we found a big pack of Playboy stickers for free and we thought that’d it be a good mascot. Some of the guys that were part of Team Playboy with me ended up starting Integrity. It was Derrick Green, who now sings for Sepultura, and Frank Cavanaugh. He used to be in the band Filter—you know, the “Hey Man Nice Shot” song that was all over the radio. And Bill Gill was in it as well.

How’d you get the nickname Dwid? Where’d that come from?
The name came about from when I lived in Louisville. There was this place called Charlie’s Pizzeria where all the local punks and skaters hung out. It was like something out of a Roger Corman suburbia movie. Underage kids were there drinking beers, listening to bands play and raising hell—just stupid shit that suburban kids did back in ’84. I was drinking a nasty-ass pitcher of beer that I bought for, like, two dollars with my allowance money. I got super drunk and thought I was gonna be a cool 13 year old and talk to the older, cooler kids. So I walked up to them and tried to say, “Hey, dudes.” I was too drunk and it came out something like, “Hey, dwids.” So they penned the name Dwid on me. Everyone had cool nicknames back then like Rat and Spike, so it was kind of a right of passage to have some kind of funny name.

Who were some of your early musical influences when Integrity was first getting started?
Probably Black Sabbath, Septic Death, Samhain, and even early Metallica was really important in our development. Celtic Frost was another one. Also, weird stuff like Bauhaus, Joy Division and Throbbing Gristle—which is industrial noisy kind of stuff. I’ve always liked a lot of weird music, and a lot of people who play music with me tend to like weird stuff, as well. We mix it all into a big cauldron and see what comes out.

It’s been said that Integrity is one of the main influential bands that started metalcore by taking hardcore to the next level by giving it a darker metal edge. Do you feel that Integrity is responsible for bringing that new sound to the masses?
That’s not really for me to say. I don’t know. Maybe? I guess it depends on who you talk to. I sing the way that I do because it’s the only way I know how. I can’t really sing like Mariah Carey or whatever. I’m lucky I’m able to do what I do with my vocal range. I hope I make up for it with lyrics and artwork.

How would you describe Integrity’s sound to someone who’s never heard the band?
I think it sounds something like Motörhead, G.I.S.M from Japan and Howlin’ Wolf. And also cock rock with some Ozzy-era 80’s sounding guitars.

Why’d you move out of the US to live in Belgium?
I moved to Brussels, like, 15 years ago. I was on tour, met a girl, we fell in love and got married. It’s either that or the beer.