MOST PEOPLE recognize Jeff Ament as the bassist for Pearl Jam but his music and skate history run deep. From being in early punk bands in his home state of Montana and later Seattle to supporting the construction of over 20 skateparks, including some on First Nations land, Jeff has been giving back to the scenes that he came up in. I threw a few questions at Jeff about those early days, the heady days of the Seattle music explosion and his skate philanthropy. Thanks, Jeff, for giving so much back! —Wez Lundry 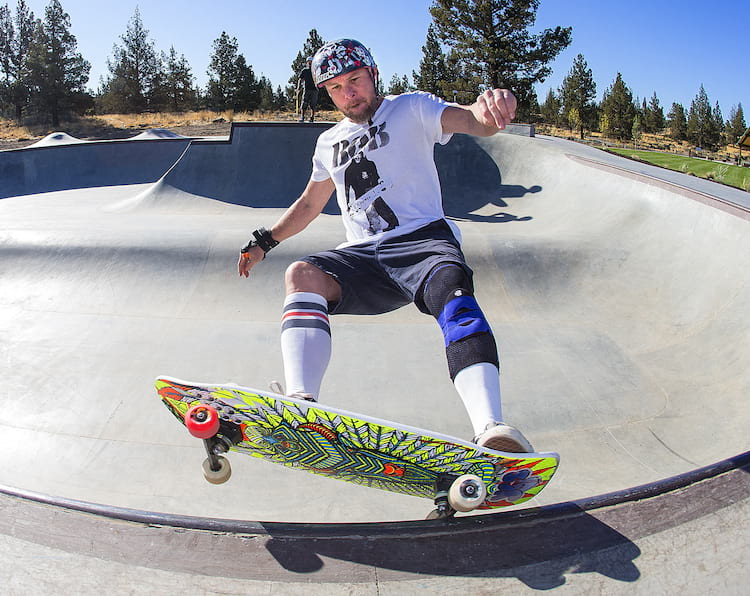 Coping crunch at 56 years old? May we all be so healthy and lucky.  /  Photo: Kanights

This interview originally appeared in the April 2019 issue.

People might not know that you paid a lot of dues playing in bands before Pearl Jam, starting in Missoula, MT, with Deranged Diction. What were those shows like? Who showed up? What was skating like in Missoula back then?
I met the guys in Deranged Diction skating the brick banks at the University in Missoula. John Donahue from West Covina and Bruce Fairweather who grew up in Honolulu. The early shows were 95 percent enthusiasm and the rest, very little skill, which almost always makes the purest art. We almost always played with Who Killed Society who sort of mentored us and let us use their rehearsal pad/living room. The shows usually comprised of about 50 hippies and some high school skaters. I did promote a show in 1982 with the Accused and the Rejectors which drew close to 100 hippies and young punks.

After Deranged Diction moved to Seattle, you guys played some of the seminal spots of the time like the Metropolis and Gorilla Gardens. Punk and hardcore in Seattle were still pretty far out of the mainstream—we all got a lot of shit for skating and the way we dressed back then. Shows also seemed to be an amalgam of styles: punk, hardcore, art rock, metal. Seattle’s music scene was years away from exploding. What was cool about playing music in that environment? What sucked?
The Metropolis was the best. Hugo ran it like a commune—open to all kinds of music but kinda found his niche with hardcore. I couldn’t afford to go to all the shows so he let me sweep up or spin records in trade. I saw some great shows there: Bad Brains, Really Red, DOA, Hüsker Dü, Buttholes, Scream, Whipping Boy and epic local shows with 10 Minute Warning and the U-Men, who were as good as any of the national acts. It was pretty easy to spot somebody in your tribe back then—wearing Vans, asymmetrical haircut, homemade PIL shirt, etc. I was coming from Montana so nothing sucked. 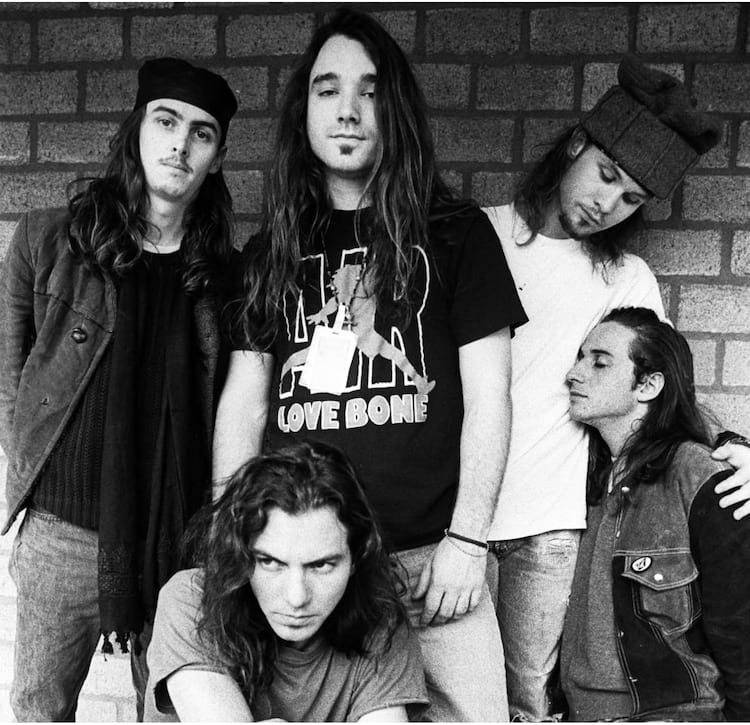 The all-ages spot Gorilla Gardens is frequently listed as the “birthplace of grunge,” primarily because it was in Seattle and there were two rooms with two shows most nights, punk and metal. After Green River came together, with its punk side and its metal side, you were on the metal side. I know it led to some tension in the band—Steve left—but what about your reception at shows? I was mostly a hardcore kid, but I loved other shit like Green River and the U-Men.
That’s actually a total fallacy. I never stopped loving Minor Threat, Black Flag, Bad Brains, SSD, Poison Idea—who had some heavy leanings—and the metal I liked was Motörhead, Venom, Mercyful Fate and others. I never got into Maiden or UFO and that stuff. I did love anything Dio sang on. I was also into King Crimson and Bauhaus and Roxy Music. Steve got really into cleaner garage bands and then split when we decided to save $265 each so we could play seven shows going to the East Coast after our first record. Pay to play, Northwest style! None of us knew how to really express what we were feeling, mostly reacting to each other’s enthusiasm and Stone had a lot of energy, the most free time and was writing the most, so the music got a little heavier with some triplets thrown in. It’s too bad Steve left ’cause we would have benefited from his ideas. I actually think the Metropolis was the birthplace.—or maybe the Green River/Melvin’s show at the Grey Door. A lot of it was the influence of My War, Get It Away, Flipper with a little Black Sabbath with Dio and Veno—and 340 days of cloud cover. Whew! Back in the day…

When and how did you pick up skating? Who did you skate with? Who did you meet to skate with when you moved to Seattle? What were some of the spots?
Our family went to Northern California in 1976 and my cousin had a homemade board with California Slaloms and Road Rider 4s that we rode while I was there, but the clincher was when he gave me a copy of Skateboarder magazine for the ride home. My dad helped me build a ramp that summer and it was on. I met a bunch of skaters when I first came to Seattle at the first Metropolis shows. The first skaters I knew were Chewy and the Accused dudes. I skated a lot with Randy Brown, who had a ramp in Ballard, and we took trips out to Sketchy’s ramp in Issaquah and Andy’s ramp on Bainbridge. We also skated a parking garage on 2nd Ave a lot when we missed the late bus after shows as it had an all-night elevator. We took the Agent Orange guys there. There was a quarterpipe at the Grey Door that was fun. I skated Andy Caro’s ramp a few times, probably the best ramp I’d skated at that point.

Did you see that first Faction show at Graven Image when they set up a ramp? JFA played there the same year, I think.
Yep, I was in the mix at the Faction Graven Image sesh. I think that ramp ended up at Grey Door.

After Green River, you were in Mother Love Bone with Andrew Wood. Malfunkshun was another one of my favorite early Seattle bands, and I’d see him hanging out on the Ave. He was so cool—we were just snotty skate punk kids, but he always had time to talk and joke around. You must’ve been a fan of Malfunkshun too. Any shows or stories stand out?
I first saw Malfunkshun when Deranged Diction played with them opening up for Hüsker Dü at the Metropolis. I was pretty mesmerized by Andy and the whole band, like Discharge and T. Rex. We worked the morning shift together at the Raison D‘être around 1986. I spent a lot of time at Fallout when I lived on Capitol Hill from ’85 to ’86. Russ and Janet were always good to me. I got my skateboards at Time Travelers, though, as I had a little trade deal going with Jim and Mike. Have you heard Regan Hagar’s—from Malfunkshun—new band with Alex Shumway, Thee Deception? Really great ’80s hardcore.

When Mother Love Bone put out its first record, it seemed Seattle was on the rise and getting some recognition. From the perspective of being in a band that was getting some attention, did it seem palpable? Did the rise of the Seattle music scene seem inevitable?
We felt so separate from the record industry, so the rise of the scene with major labels calling seemed bizarre at first. Then, it felt a little like revenge for ignoring us for so long. Love Bone took full advantage and ate and drank at all the good restaurants in town for a couple months. The whole trip has been so ridiculous. The fact that I’m 56 and still writing and playing and skating with my friends is the best life I could have never dreamed of. 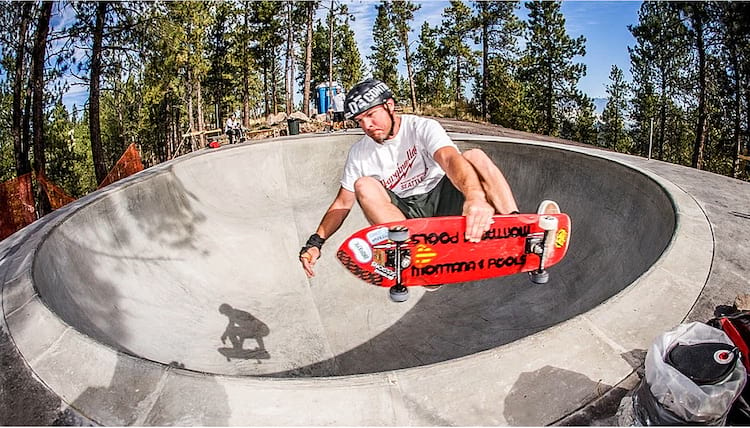 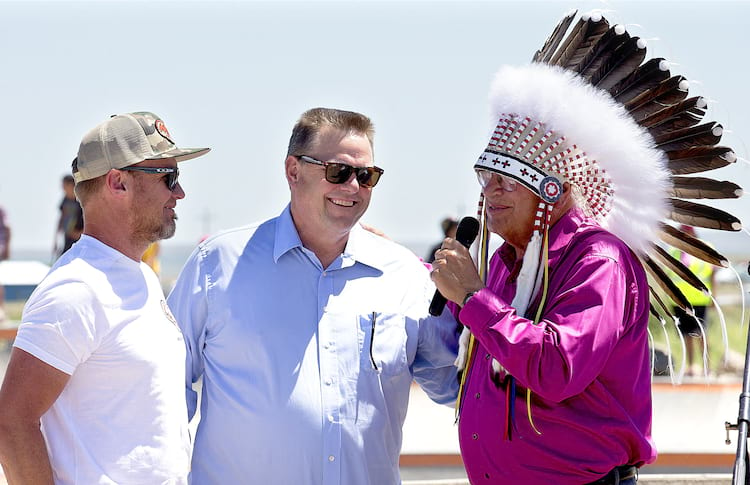 Jeff Ament, John Tester, and a Blackfeet Chief at Browning, Montana skatepark opening ceremony.  /  Photo: Kanights
Did you keep up with skating the whole time that Pearl Jam was blowing up? Or is it more something you’ve been able to come back to?
I mostly quit skating ramps around 1987 but still skated for transportation until the early ’90s.The first time we went to Australia in the mid-’90s we stayed on Bondi for a few days where there was a ramp on the beach. Eric Johnson, our tour manager, and I went out and bought Think longboards and skated that ramp and bodysurfed in the ocean the entire stay. Epic days! That’s when I got the bug back and starting skating ramps again. When they built the first parks in Oregon, Steve Turner and Chris Manaras took me down to Lincoln City and Newberg and Aumsville and it was on! Red and Hubbard have given us all so much. It’s impossible to quit skating when there’s so many rad new parks being built every year all over the planet.

The Northwest has always had a pretty hardcore but frequently ignored skate scene, but that started changing with Burnside ushering in the DIY era and then Red and Hubbard establishing themselves as premiere park builders, laying down concrete parks everywhere. And Montana is now a legit skate destination with a bunch of parks. Tell me a little about your activism and support for skating there. I also know you have been at the forefront of getting parks built in First Nation land, along with Murph and Wounded Knee. How did that come about? How has it been received? It’s pretty shameful how neglected some Native American reservations are, including the high rates of suicide and alcoholism. Is skating making a positive contribution?
In the early ’90s, we gave $50,000 to help build the original Seattle Center skatepark and that was the start of Montana Pool Service, which became my own foundation five years ago. I’ve been involved with over 20 parks, mostly in Montana, with the focus on rural areas and Native reservations. Grindline, Dreamland and Evergreen have made our state one of the great skate destinations in the country. It’s been so much fun working with skaters, communities and great builders and helping design bowls and features. Working with Murph, Walt and Monk on the Lakota parks has been one of the most fun projects I’ve ever been involved with, and there’s more projects in the works with Wounded Knee and Stronghold Society. Our country’s history of abuse of our Native people casts a large and destructive shadow on these communities. Giving young people an outlet with the skateparks has proved to be a positive in places like Pine Ridge, St. Ignatius, Browning, Hays-Lodge Pole, and Box Elder, and there’s a new generation of rippers out there creating their own scene and unique style. I was lucky to share some great moments and sessions with Monk. His enthusiasm for all things skateboarding—and more recently with music—was infectious. In particular, our partnership with Murph and Walt to build the parks in Pine Ridge was so rad, and Hubbard set the tone by camping on site, working for free and teaching the locals the basics of the art of alien freemasonry. I owe a lot to Monk, Jay, Rabbi and Shags for building my bowl 16 years ago and kicking off the skatepark culture in Montana. 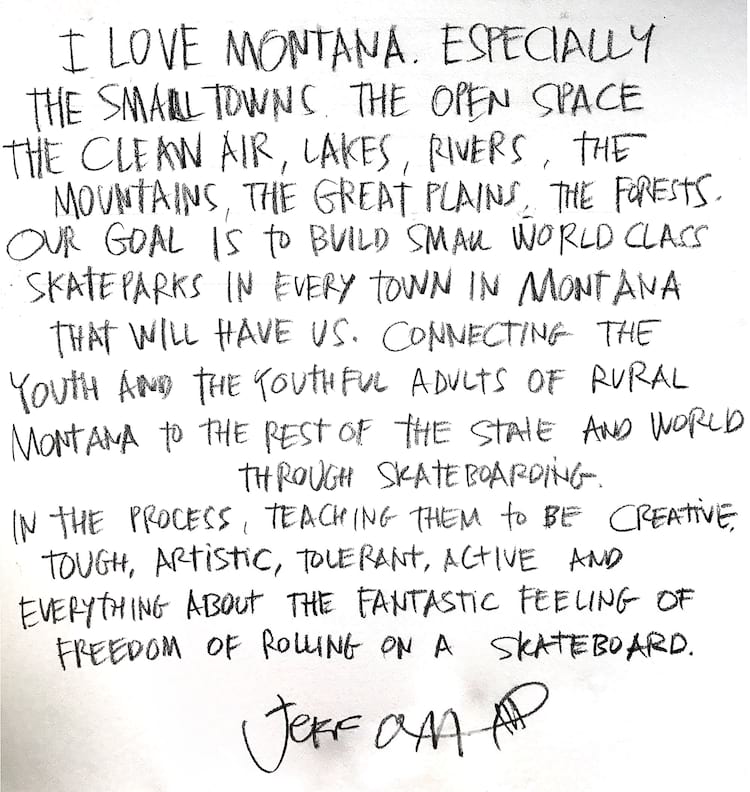