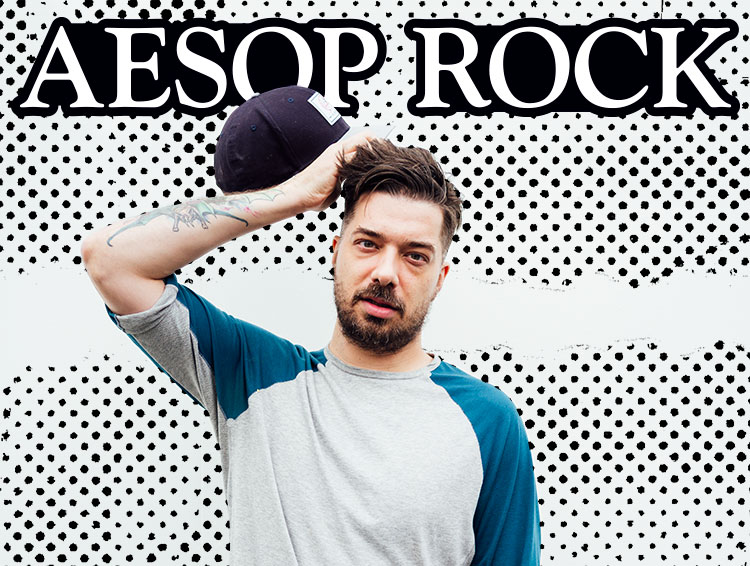 On the eve of his seventh full-length solo release, indie rap stalwart Aesop Rock still seems refreshingly nervous. Having birthed a steady stream of consistently entertaining and innovative projects since the late ‘90s, any other veteran MC at this point in their career could easily be phoning it in based entirely on the strength of reputation and past accomplishments. But as his new album The Impossible Kid will attest, it’s nice to see one’s passion uncorrupted by their profession as Aes continues to push forward and develop his style. In short, he truly cares about this rap shit. From his earnest early classics to his more recent explorations with such like-minded co-conspirators as Kimya Dawson and Homeboy Sandman, Aesop Rock’s dedication to craft is deeper than your average blowhard super MC and without sacrificing the fun. While serious in approach and often dense in content, this isn’t the unlistenable microphone masturbation that often plagues any sort of thought-provoking hip-hop. He’s not trying to save the world with each verse. He’s only hoping to brighten it a little. Interview by Eric Swisher | Photo by Ben Colen

What’s your process is like when it comes to lyrics? How do you come up with this stuff?
I’ve always been a note-taking kinda guy. Before phones became so prominent, I was always walking around with little scraps of paper in my pockets. My dad was always like that. He always had a 3x5 index card in his breast pocket.

Pocket-protector style?
Totally, but that’s how his thought process worked and I picked that up from him. These days, I always have this list of words and phrases going on my phone. I’ll hear things throughout my day that I’d like to work into a song and write it down. Whether I get to it tomorrow or two years from now, I know it’ll be on that list. From there, once I have a beat that I feel could turn into something, I’ll start patching things together. I might think of a song concept first but I usually have to write a few lines of nondescript rhymes before I really know what I’m talking about. These might not even make the final cut but it will let me know what natural shape or direction the song is heading in.

You are seen as one of hip-hop’s lyrical greats. That’s obviously a credit to your artistic merits but at the same time, do you ever feel somewhat trapped by this bar you’ve set for yourself?
I appreciate you saying that and I know what you mean but those are all things that others have applied to me and what I do. I don’t feel the need to sound smart and I’m not going for that. I just want to sound fly and do something cool that I haven’t done before. I do think that my goals have changed over the years. I used to love making things so much more word soup-ier. Not in a bad way but I think in the ‘90s, we all just started getting overly lyrical. It became this thing where you wanted to overwrite to the point where you were the most extreme with it, where it became physically difficult to even pull off.

Everyone was the incredible windbag.
Exactly. There’s stuff from back then that I could never perform live because I literally could not do it. I’m 39 years old now. The idea of trying to impress someone with my physical abilities with lyrics has come and gone. I’m not trying to be the lyrical miracle anymore, I just want to be a better writer. Trying to be more concise and pulling out only what I need from the word soup. Trimming the fat while still hopefully zooming in on the parts that are cool.

So what can fans expect to see from your new album, The Impossible Kid? Your seventh solo album, what’s the new territory you’re exploring on this one?
It’s hard to put into words, man. I don’t really know what the overall sweeping answer is for this album. It’s corny to say but it all continues to evolve and change over the years. If you’re really tuned in and trying to be creative, you’ll know when you’ve expressed thoughts before and move on to something different. It doesn’t interest me to keep doing the same thing over and over again. I’m not trying to just go through the motions. I’ll spend a week breaking through writer’s block to get a line right because I know it’ll be worth it when I do. When you get that moment, that’s the feeling you’re chasing. No one is probably even going to notice but that’s what keeps me interested. I love the craft of rapping. I’m lucky in that I don’t need to pump out quick product. I can take my time and get shit to where I know it needs to be. More than just coming up with clever or funny punchlines for their own sake, I’ve been trying to do more of that in the tone of my own personality. I want the lyrics to work on their own as well as coinciding with my sense of humor and how I view the world, not just some “I’m hot like pizza” bullshit. I want it to sound like me. You can rap clever stuff all day and get away with it but I’m going for something more personal these days. I wrote raps for years where I was only trying to be the illest MC and it was all so serious. I imagine I came off like a guy who wasn’t that fun to be around. People think I’m walking around being intense all the time. They don’t expect me to actually be kind of a funny dude when they meet me.

Where does The Impossible Kid title come from? Is it skate-related? Anyone that has seen your Instagram knows that is your go-to trick.
It wasn’t skate-related but it worked out that way. It came up while I was writing the song “Get Out of the Car” for the new album where I refer to myself as that. It comes from never really being happy with things while others just seem to be coasting through. I feel like it’s impossible for me to figure everything out. It’s just weird because I ended up moving to Portland and meeting you guys, I started skating a bunch more again and happened to have my impossible still intact. Boom, boom!

It was funny because you seemed to just be getting used to rolling again and out they came!
They just feel good to me! I’m glad people are doing them again because that’s always been my trick!  I had to wait around years for them to come back! Thank you, Dylan Rieder!

Like you said, an artist continually evolves.
Yeah, I was watching one of his freestyles earlier. That guy rips a lot of Magnums.

Still ain’t got no kids, though.
I remember Quim rapping in Eastern Exposure and thinking that was cool at the time. He’s probably my favorite of the bunch. I can hear the influence of what Quim listens to. You can tell he listens to Illmatic. But some of the other ones, not specifically the guys you mentioned, you just start wondering where the whole thing even comes from. It’s like rap music by people who don’t know anything about rap music. Like, how many times removed is this song from the genuine article? I don’t even mean that as a diss, more like a case study.

Were you more stoked to have a phone convo with Chuck D about diversifying your portfolio or sessioning with Lance Mountain, even though he drank your only water at the park on a 100-degree day?
Those are two great moments for me but I’m more starstruck by pros these days because I’ve been around rappers for so long. Music has been demystified for me. Rappers on a certain level are cool but I just know deep down, they’re all probably insane. Don’t get me wrong, I love Chuck. He’s the man! But Lance Mountain is the first board I ever har! Boneite! He just walked into the skatepark that day and I was so hyped! He’s the raddest!

Even though he drank your only water?
Yes, he drank my only water and you know what? I would’ve gone to the store and bought him another water if needed! I thought it was funny because we were all watching him try this trick, he finally lands it and we’re yelling for him when he immediately cracks open my water and starts downing it. I went from totally stoked to “Aww, man!” so quickly.

So what’s up next for Aes Rizzle?
I have my new solo record coming out and I’ll be touring for that but I’m also scoring a movie that’s gonna be coming out soon, Bushwick. It’s one of the few times someone has knocked on my door to produce music outside of my own stuff and this ones got people running through Brooklyn with machine guns. I’m down to make music for that. I also produced a record for Blueprint that should be coming out soon as well as a few new songs with Kimya Dawson and a few more with Rob Sonic. There will be more Thrashin’-inspired music to come for Igor’s Record Collection throughout the new year.