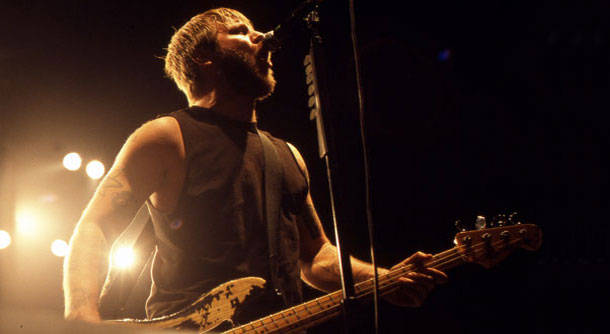 From Gainesville, FL, Against Me! began through humble roots with one man, Tom Gabel, and his acoustic guitar. Releasing one acoustic solo album, the single musician show eventually morphed into a four piece with James Bowman on guitar, Andrew Seward on bass, and Warren Oaks on drums. Over the past decade the band has climbed the rungs of the independent music ladder, releasing various albums on No Idea and Fat Wreck Chords. In 2005, the band signed to Sire Records, solidifying their popular presence. Now in 2007, Against Me! is poised to release their latest album, New Wave, with Butch Vig—producer for such heavies as Nirvana, the Smashing Pumpkins, and Sonic Youth. Embarking on yet another semi-global tour of the United States, Europe, and Australia, Thrasher exchanged words with Against Me! before they hit the stage in San Francisco.

Give me a brief rundown of the band’s history, how it started, and how it progressed into its present incarnation.
Warren: This is the decade anniversary of Against Me! We’re 10 years old. It started with Tom all by his lonesome. Then he learned how to make friends, so here we are today.
Tom: We have three full lengths; we’re about to release our fourth. We have a live record, a handful of EP’s, a DVD, we’ve played a couple thousand shows, and we’ve traveled the world.

Did you have a decade birthday party?
Tom: Not yet. Actually, December is the technical birthday.

What does it feel like to be 10 years old?
Warren: We’re still pretty sprightly; we have a couple of gray hairs.

Do you think touring so much is a trade-off for normal life shit like relationships with friends and family?
Tom: What’s a normal life relationship? Just because we don’t have the relationships everyone else has with friends, we have friends that we’ve made along the road that are just as real and just as valid. You have to travel to retain those relationships. As far as my family, I call my mother at least once a week, but, you know, I don’t want to live with her. Even if I were working as a mechanic I wouldn’t be hanging out with her everyday.

There’s no missing your lifestyle when you’re back in Gainesville? Have you pretty much adapted?
Andrew: We adapted a long time ago.

Have you guys been to the Everglades?
James: Yes, I walked through them.

Run into any alligators?
Warren: They’ve been saying that alligators have been becoming more and more aggressive. There have been more alligator attacks in the past year than the entire decade before, or something crazy like that.

How do you think being young and going to shows has changed from when you were a kid to the present?
Andrew: I don’t think it’s changed; depends on what kind of show you go to.

I’m talking about the punk and hardcore scene.
Warren: Bands are still loud; you got guitars, bass, and drums.
Tom: I think music in general has drastically changed; the way people buy music or listen to music. But going to shows, we play fairly often at the State Theater in St Pete’s. I remember going to shows there 10 years ago, and it seems like the same things are happening.
Warren: The people change, and that’s about it. 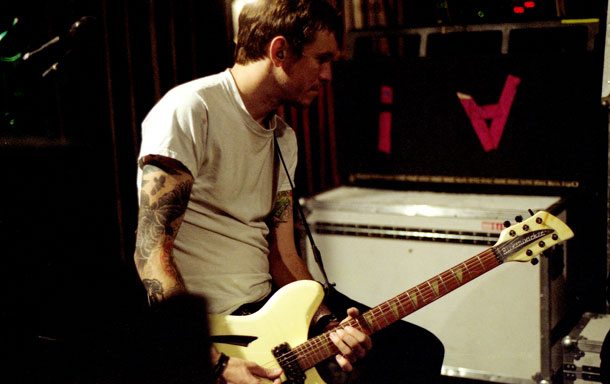 Can punk music still be classified as a counterculture?
Tom: It’s a counterculture to something, no matter how you look at it.
Warren: If you want to split hairs, I’d say it’s more of a subculture than a counterculture. It has its own food and music, dance moves, hairdos, and fashion. If you want to be an anthropologist about it, there’re sub-sects of it—vegans and all that. I don’t think everything that punks do is counter to the dominant culture. It’s more of a subdivision of the dominant culture, and actually pretty similar.
Andrew: I’m picturing anthropologists watching punks through the grass.

What’s the best thing about being on a more major label?
Tom: The best thing so far is being able to make a record with Butch Vig.

Was he different than producers you’ve worked with in the past?
Tom: He’s really in-depth and very meticulous. He’s his own person; he’s got his own style.

I’ve read a bunch of your interviews, and you referred to it as a cliché of being interviewed. Is there no difference?
Andrew: There’s a distribution company that gets the record into stores, and that doesn’t affect us on the road all that much.
Tom: There’re different people that work there.
Warren: We have relationships with different people, but for the most part we still jam in a little practice space in Gainesville, we go play shows…
Andrew: Then we do it again. Rock and roll.

Does it change the way you evolve as musicians when people are scrutinizing the music you make?
Tom: I don’t think people scrutinize our music. I never had an interview where someone’s like, “That’s a really interesting chord progression you chose,” or “That’s a really interesting beat, how did you come to that?”  It seems like most interviews have got nothing to do with music really.

What makes a good show for you guys? When you guys walk off stage, what puts a smile on your face?
Tom: Great sound is imperative. It has to sound good on stage. If it doesn’t sound good on stage but the crowd is excited and really into it, then that can totally make the show. Either one or the other has to be there.
Andrew: I would definitely say the crowd. When people are going crazy, how can you not go a little crazy yourself?

When you were younger, what attracted you to playing music?
Andrew: I got a Peavey bass when I was 12, and I thought it was the coolest thing ever. Looking back on pictures of me with a mullet, it was in fact the coolest thing ever.
James: After all these years it still rings true.
Tom: I have no idea what drew me to it; I just knew I wanted to play.
James: I remember seeing bands on MTV and watching people play guitar, like Cece Deville, and just thinking, “Ooohhh, that’s awesome!” So I asked my grandma for a guitar, and she got me one. Many years later I actually learned how to play it.

Did any of you guys actually grow up skating?
Tom: I had a Lance Mountain board when I was younger that I was stoked on, but I was never very good.
James: I had a Vision John Grigley deck. I remember falling off and hurting my leg really bad, and never getting back on it.
Warren: Mine was a super-wide Nash with orange and green spray paint logos on the bottom. I used to skate around the post office parking lot.
Andrew: I had the Pushead/Metallica Zorlac board and Slimeballs.

That’s a sweet one.
Andrew: I rode that for about three weeks, then broke my wrist.
Warren: On a related note, I actually had a pair of rollerblades.
James: Interview’s over.

Download Against Me! songs or albums from the iTunes store here or check their myspace for upcoming shows.
© 1981–2020 High Speed Productions, Inc.