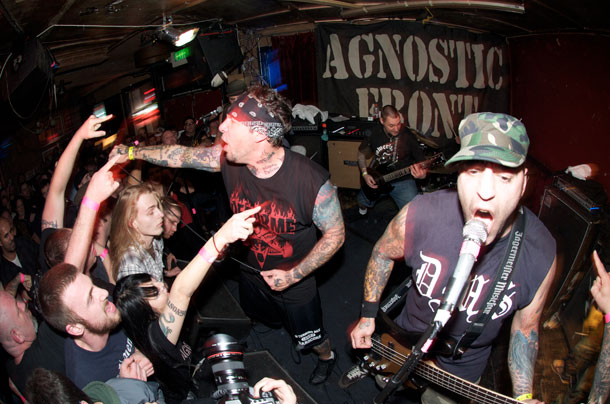 "If we were from anywhere else, it wouldn’t have that sound, or that edge and anger"

Way before Internet blogs and social networking sites, Agnostic Front was creating serious waves in the music underground. The battles that flared up in magazines like Maximum Rock and Roll were serious business with consequences. Unlike the punk scene today, people were genuinely afraid  of the strength and unity of Agnostic Front’s message and rabid following.  This wasn’t an act—shit was hectic back then and people got hurt. At the beginning of 2010, Agnostic Front re-released Victim in Pain,  with their first EP “United Blood” added as bonus material. They toured the US performing both records in full to celebrate the 25th anniversary of the original releases.

After 25 years of doing Agnostic Front, what keeps you guys going as a band?
Roger Miret: It’s pretty simple. We love what we do. We enjoy being on the road.  We enjoy meeting new people and seeing  old friends. It’s been a passion for us; it’s a commitment, we love our scene and committed ourselves to it. It’s never been a fad. A lot of people come and go. To us,  it’s been our home. We love it here.

How did you get into Agnostic Front?
I’m not the original singer. I’m the only one in any audible recordings at least, from United Blood in 1983 on. I played in three bands prior to AF. Vinnie Stigma was a fan of the last band I was playing in, called the Psychos. He used to come out—along with like three other people—to see us. One thing led to another and he then asked me to join  the band.

The record Victim in Pain is obviously  a classic. Still, it sounds pretty primitive in terms of your songwriting, even compared to what was coming out at that time in punk rock. What do you account for its popularity?
It’s definitely a very primitive record, but one thing you’ve got to to keep in mind is that Agnostic Front could only have come out of New York. It’s primitive and edgy and so  is New York—like old-school Taxi Driver New York. It’s definitely in a class of its own. If we were from anywhere else, it wouldn’t have that sound, or that edge and anger. Before Victim in Pain there was nothing but a bunch of singles released from the New York hardcore scene, that’s all people knew.  Then all of a sudden we put out this album called Victim in Pain, such an angry insane record—not purposely—but that’s just the way the band was. And suddenly it got worldwide attention. It spread everywhere and people were like, “Wow, I got to get this.” It’s definitely a distinctive sound.

At the time of its release the perception was that the record had a real message to it, even a movement behind it.
It’s about unity and coming together with the scene, it’s about injustice. It’s a true  punk record.

Were you trying to express a direct message to people through the record,  or was it just a personal expression of your experiences?
Absolutely; the message is very clear:  To keep the people in what could be a destructive scene in check. Keep everybody alert, like, “Hey, we need to stick together and do this together. We’re a family.” The secret  to our longevity and legacy is that we’ve always been very committed to family and  we live by the basic codes of life, which are honor, respect, and family. You hear that in our records.

Does it seem ironic to you that you were associated with the destructive, close-minded side of punk rock? Even though in looking at the record there is a positive message, it seems like there was the threat or aura of close-minded violence associated with the band.
It does. It’s really weird because I didn’t understand a lot of the crazy stuff going on all over the place. We come from New York City, and New York is a place that’s multicultural, different religions, people learn how to live with people there. There’s no room for division or racism or anything. That’s what our record is all about, just being with each other and our friends. It wasn’t  until we toured America that we saw all of the problems. And it’s really weird because our message has been clear: “There’s no justice, there’s just us. United and strong, blacks and whites, united strong, punks and skins”—that’s from the anti-fascist song “Fascist Attitudes.” We always had a more skinhead approach—we liked the working class ethics of it—but then the skinhead thing became very right-wing and crazy. But we were into the other side of it, obviously… I’m Hispanic.

You were fully tattooed at that time. How did you get all that work done before you were 18?
I’ve been getting tattooed since I was 15. We were one of the first heavily tattooed bands, period, in the whole scene. Back then when you were heavily tattooed, people would leave you alone, walk away from you and clear the street. Anybody who was tattooed then was either a criminal or military—but mostly criminals where we’re from. All of a sudden it became popular.  Now it doesn’t even matter.

The imagery on the Victim in Pain cover is pretty brutal. What’s the story with that? Who’s the guy getting lynched on the inside?
I don’t know. I had found this really cool World War II book. The original picture of Victim in Pain was a completely different cover; it was a picture of me on top of the crowd at CBGB’s. Then I saw that cover picture and said, “Wow, this is really fucking intense. This says it all, a victim in pain.  How insane is this guy looking to the camera as he’s about to get shot? What’s the message here?” Well, the message is, if this happened once it can definitley happen again. It was clear. At about the same time, I saw the picture of that guy getting lynched somewhere in Italy. I forget the name of the book; I just cut them out and said, “This is  the artwork.”

If you listen to the record, I think that what it’s saying is, “Society is pushing you in one direction. You can be a conformist, and this is the shit that will go down—or you can fight  against conformity.
You got it. That’s really what it’s all about.
© 1981–2020 High Speed Productions, Inc.