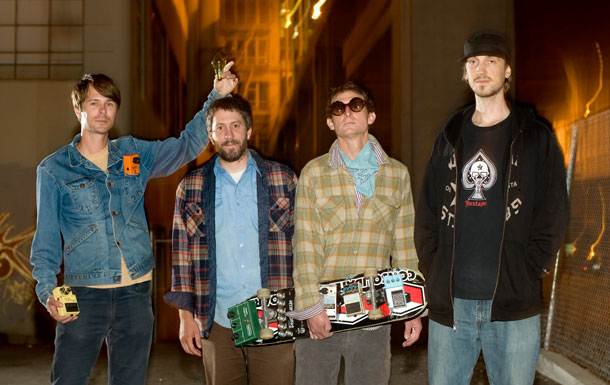 When you hear AM Magic’s new album Magique Concrète, it will sound familiar. Not because you’ve heard it before, but because in some way or another the songs are about your life—your life skateboarding, your life growing up, and perhaps your life putting on someone else’s pants in the dark. Or maybe your life leasing Volvos.

And how many records have you put out?
Mike: Two. So we aren’t the most  prolific band.
Karma: We’ve got a lot of recordings, though. We’ve put out demo-type things. There’s shit online, we have stuff that you can hear—old stuff.

Has it been the same group of people the whole time?
Mike: It’s been Doug Saenz, Karma, and I for the whole ride.

And now you’ve got an extra Doug, too?
Mike: Our bass player, Doug Poore. A fifth member will kind of float in and out here and there. We’ve had a guy, Dan Butler, play keyboards. He’s The Bastard. Tim Nargis played with us for a few shows.
Karma: Nik Freitas played with us for  a while.

And he recorded the album?
Karma: Yeah, for the most part. We did the basic tracks at Different Fur and did all the overdubs down at Poppy Peak, Nik’s studio.
Mike: We did everything down there except for drums, bass, and a couple guitars. Nik helped flush it all out. He played keys on all of the songs.

Was it nice to have someone who’s one step removed have editorial control to a certain degree?
Karma: He was pretty involved.
Mike: We let him sort of run with things, whereas we’ve never done that before. We trust him as someone who shares our sensibility. And he’s such an amazing musician that we were able to lean on him a little bit.
Karma: He knows what’s going to fit; and to our ears we know that’s what’s going to work, too. We work together and search it out and find it and think, “That’s it,” and put it down. Sometimes he’s got it dead on. He helped bring out some of the hooks that were already there.

One thing I did notice about the  record is that the songs seem to be based around actual experiences,  that they’re narratives?
Mike: I’d say a lot of our songs are autobiographical, for sure. We aren’t trying to write universal-type lightweight kind of pop stuff. We write from the heart, as corny as that sounds. A lot of our lyrics come from personal experiences and situations.
That’s interesting, because they seem fairly universal. Most people reading Thrasher and picking up your record will identify with it.
Mike: Skating informs a lot of the music we do, for sure. How could it not?

Is it difficult to be in a band now that you’re a grown up?
Mike: Not really, I think that we’ve balanced it pretty well. We don’t have huge aspirations that we may have had 10 years ago. We’re not going to go on tour for six months out of the year or anything crazy like that. We just balance it, just like Karma would with skateboarding and family life. It’s pretty easy to do. If we make a record every two years for the next 20 years and play a couple shows a month, and maybe do a mini-tour here and there, I think we’d be content with doing that.

Lets talk about Volvos and 401k’s. I’ll have to say, we’re conducting this interview in Mike’s Volvo, and there’s excellent legroom.
Karma: You’re getting real Volvo experience right now, Scotty.
Mike: I’m selling you on this Volvo. What’s it going to take to get you in this car?
Karma: What are your wants, Scotty? What are your needs? Your wants are your needs. In a Volvo?

Mostly a good electrical system and excellent safety features.
Karma: You want pleasure? I can give  you pleasure.

You just have to move to Marin. That’s the next step. I’m thinking of skipping the middle section of life and moving straight to Marin and getting a little place in Corte Madera.
Mike: You remember I was telling you about the time I was loading in my gear for a show and these two dudes were hanging out at the door right there in front of the practice space? They see me pull up and the vibed me like I’ve never been vibed before.

Because of the Volvo?
Mike: Yeah, and I’m like, “Dude, you don’t know me, for one thing.” And I could tell they were skaters, too, which kind of bummed  me out.
Karma: You’re like, I’m leasing a Volvo in San Francisco. I live in a city and I’m leasing a car, look at the kid’s seat in the back, I’ve got gear in the trunk, what the fuck?
Mike: They were literary saying “Let’s throw rocks at that guy’s car.” And one guy had a Low Card sweatshirt on, too. I was like,  “Give me a break, man.”

Did you say something to them?
Mike: Nah. And I was trying to get by  them through the door and I had my amp  and guitar with me, and they wouldn’t hold the door.

What are the differences between touring with a band and touring with a skateboard company? Karma: It’s the same. You have your skateboard, you hit a skatepark during the day and play music at night. It’s pretty similar really, pretty grass-roots. Unless Vans is paying for it, then you’re in a big bus and on the Warped Tour. And that’s pretty fun, too.

You never want to throw Andy Roy in the van for sport, just to mix things up  a bit?
Karma: I wrote a song for Richard Paez. We’re going to practice it and the next time we play in Visalia we’re going to get him to sing it.

Is it a love song?
Karma: Nah. It’s kind of like a country song sung by a Vato loco. He’s got a little country in him.

How is Visalia?
Karma: There’s a big skate scene; it was a big music scene. People doing four-track recordings and writing little catchy dirty guitar kind of songs and punk rock.
Mike: When we first started playing, Visalia was more home than San Francisco, for sure. We would go down there all the time and play shows with our friends’ bands. San Francisco was kind of a hard nut to crack for a while. And us being a young band, Visalia was more our speed.

Is there anything you guys would like to say to the Thrasher magazine readers,  any advice to the young bands that are out there?
Karma: Keep on rocking, keep on skating. Diversify, create your Web presence—I don’t know—do it how you want to do it. Write from the heart, write about things that affect your life. Just write about those things and people, take the obstacles and turn them into art. Try and make the negative into a positive through skating or music or whatever it is that you do.