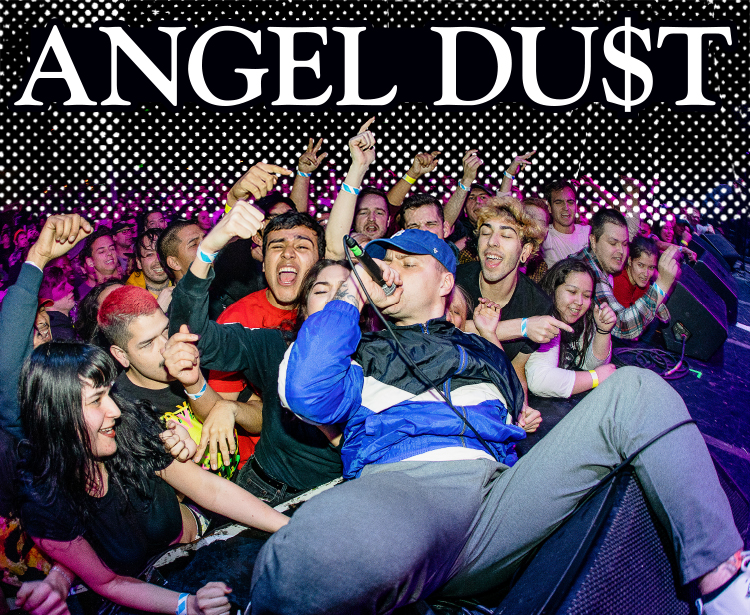 If you’ve ever had the chance to see Angel Du$t, you know they get the crowd so damn high they lose their fucking minds. They’re a mix of hardcore, punk and pop that sounds nothing like the other bands these guys play in—Turnstile and Trapped Under Ice—which is the circle that this band comes from. It’s complicated—but it’s also simple. Once it’s explained to you it all makes sense. —Atiba Jefferson

How did Angel Du$t start?
Justice: Angel Du$t started with me, Pat, Dan from Turnstile and Nick, who is no longer in the band. We started writing all kinds of different songs in my room before we decided the vibe we wanted to go with. Then Brendan, who is in Turnstile and Trapped Under Ice, has just always been a part of the band. He always has input. We play a lot of shows with Turnstile. Jeff started touring with us a little bit before he actually joined the band too. Every member of the band is very organic and close to a circle.

Brendan, how is it when Angel Du$t and Turnstile play? How is it to shift gears and go from singing to playing guitar?
Brendan: It’s cool because it’s a lot of the same people but it’s very different worlds—going from singing to playing the guitar. I pretty much learned how to play guitar standing up for Angel Du$t. I’ve always played guitar in my room, but I never actually played standing up for anything. I had to teach myself how to stand up and play. It’s cool. It’s exactly what I would want to play on guitar in a band. And it’s definitely less physically demanding than singing in a band.

Is it fun or stressful for you to do both?
Brendan: It’s definitely exciting. On this last tour we got to play together. We probably won’t do a tour together for a while now. It’s not every day that we get to play together back to back like that so that was a special thing. It’s definitely exciting. It’s also a test, especially for Daniel who plays drums. All of it is a test of physical endurance.

Have you ever played Trapped Under Ice, Angel Du$t and Turnstile?
Brendan: No, that’s never happened.
Justice: That was a rule that I had when Trapped Under Ice started picking up and playing shows again after Angel Du$t had been a band for a while. It was a decision that everybody was into but I really didn’t want to sing in both bands the same night just because I feel like they’re so different, but I feel like it might come across as feeling not as authentic. Even though people are complex and they feel a lot of different feelings but just way different vibes. I think they serve better in separate situations.

Where do you guys get your inspiration? It’s such a unique-sounding band, especially with the new stuff going in I feel a different direction.
Justice: Definitely bands that people have compared us to. There’s influence of hardcore bands that are less obvious but still definitely relevant. People say The Lemonheads a little bit, and I see that for sure. Say on this record, it would be the addition of The Replacements which are a cool band and they definitely inspire me—and The Feelies from New Jersey and the way they use percussion to manipulate energy and make a slow song feel way more exciting.
It feels faster than it is.

Where is home for Angel Du$t? Is there a home?
Justice: I don’t know. I’m definitely a vagabond. I’ve lived in every city. I think we’re all like that. We’re all willing to go wherever and do whatever feels good. For the most part we’ve all lived in, close to, or spent time in Baltimore. That’s probably the closest it would get.
Brendan: I grew up between DC and Baltimore and I’ve always just naturally—by going to shows between the two—viewed them as one thing, but when Turnstile started it was from Baltimore, even though I wasn’t living there. I think Trapped Under Ice, Angel Du$t and Turnstile revolve around that connected team around that area. Not specifically only in the city—just the connecting area that makes a scene.

You recently dropped a video and two songs. What do you guys have coming up?
Justice: As of tomorrow it’s going to be some new songs, announcing the record and releasing a video. The record is out March 15th. We got a lot of tour shit planned. It’s going to be announced. Tomorrow is like a wave. It’s going to be sick.

Where did the name Angel Du$t come from?
Justice: Straight up, it’s not even a joke because ain’t nothing funny about this shit—the idea that music was so much cooler in the ’80s because everybody was smoking PCP. That’s the missing factor when you’re, like, What is it about the ’80s? It made punk, hardcore and just music in general so much more exciting and unhinged. Most of the dudes really were smoking PCP and were just on one. We’re, like, Let’s incorporate that feeling of being a dust head into the band. Not exactly using it, because most of us don’t get really high. Most people don’t actually even need drugs. Then the little dollar sign came about for legal reasons because there were other bands that had similar names. The band’s name is technically Angel Dust Money.

Are you aware of the Thrasher column Jake Phelps used to write called Angel Dust?
Justice: People used to send me photos of it and I would post it. I put it on Instagram at some point.

How is it when you guys are on the road? Who in the band skates?
Jeff: I love skateboarding.
Brendan: I skate as well, when I’m home and on tour.
Justice: Yeah, I’m going to rank myself first-worst or second-worst in the band. I’ll dabble but I skated a lot when I was a kid. I can do a kickflip.
Jeff: I’ve seen Justice ollie up curbs.
Justice: Yeah, my real trick is the kickflip in Timberland boots. That’s my crowd pleaser.
Jeff: I can vouch for that.

Jeff, tell us about where you’re from.
Jeff: I’m from the Olympia/Seattle area and grew up skating there. I was saying I don’t have a place but I live at my friend Taylor’s right now because I’m always traveling around. He’s die-hard, a literally skates-every-day kinda guy. As am I when I can squeeze it in, but he’ll take me out even when I’m dog-tired and we’ll set up ramps and rails at a little parking garage up in Olympia because it’s always raining.

Did you have a ramp?
Jeff: In Seattle there’s this big, giant ramp. It was like the dream forever. Then there’s this guy Max Holbein that we’re all friends with. He is crazy about building. He just builds and builds and builds. They secured this warehouse spot and just built a nine-and-a-half-foot vert ramp inside. Now it’s ridiculous. It’s literally a skatepark outside. It’s gone crazy but it’s one of the coolest. Whenever people say, “What’s the best
skatepark in Seattle?” I say, “Oh, the warehouse.” It’s literally the best skatepark there.

What pro skaters have gone there?
Jeff: Reynolds rode it. The Lakai team was there. Simon Bannerot skates it all the time. He just got the cover of Thrasher, which is cool. Erick Winkowski’s been friends with everybody for a really long time. He just recently went pro and he’s one of the coolest skateboarders I’ve ever seen in my life. He’s honestly probably one of my favorite skateboarders ever.

Justice, who’s your favorite skater?
Justice: Oh shit, man. When I was a kid Chad Muska was real big for me. The whole Shorty’s team was real sick. For me, being where I was from and a lot of my surroundings, I felt like I could relate to them. It made me feel like a little less of an outcast in the skateboard community that I was involved, where it was people who were really into punk music. Which I also was into, but it’s like they had a different vibe that I could relate to. I think that has a lot to do with my development. Even looking at my style now, I think that probably had something that carried over.

Do you ever play SKATE against each other? If so, who wins?
Brendan: We don’t play SKATE a lot. We just skate a bunch. If we were to do that, Jeff’s definitely winning.
Justice: I’m putting my vote in for Dan.

Jeff, whats the gnarliest thing you’ve done on the board?
Jeff: I ollied off this big-ass hospital sign. It was off the sign and over a stop sign. It’s considerably taller than the stop sign, and then over a curb, into the street. It was probably the gnarliest thing I ever did as a kid. The first one definitely fucked up my knee real bad which later in life lead to meniscus surgery and then a torn MCL.