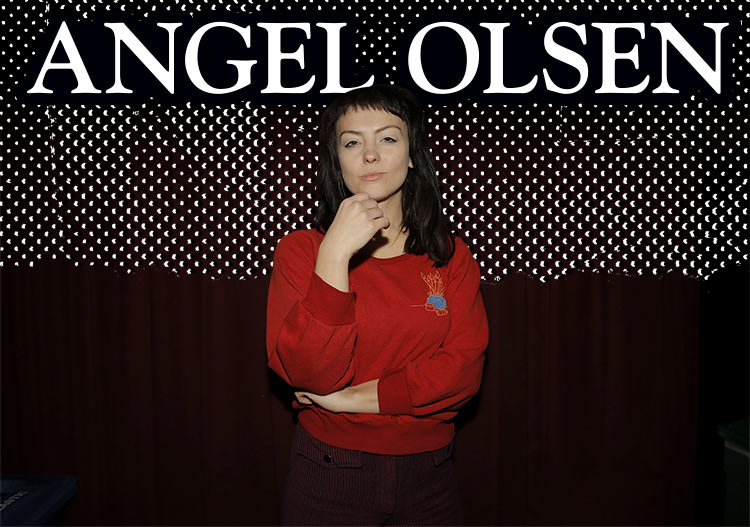 Angel Olsen is multi-talented and genuinely impressive. Her solo career dates back to 2010 but I was first introduced to her music with 2014’s Burn Your Fire For No Witness, which caught my ear with her dark riffs and amazing voice. Last year  she released My Woman which adds to her catalog of evolving tunes. She has such a  wide range that it’s not fair to categorize her music. We talked at The Fillmore on a  recent sold-out tour about playing late-night talk shows, her latest album and more.  Interview & photos by Jordan Joseffer

What made you first sit down at a piano or pick up a guitar?
I played piano when I was, like, 12 or something and kind of quit piano lessons and veered toward the guitar because it was warmer and easier to write songs to. Later on in high school I found myself writing different sort of prog-y piano stuff but I could never sing to it. So I just kind of continued playing guitar and being in bands and stuff like that instead of playing piano. But I always thought about playing in a band as just a keyboardist or something like that. For whatever reason it took me a while to connect the two: singing and playing.

How does it feel to go from playing small DIY venues to selling out a famous venue like this where people like Jimi Hendrix and Otis Redding used to play? Is it surreal?
It is surreal and it feels really homey at the same time. This was probably very homey for them and there’s probably a reason why they did several nights in a row here instead of playing a huge stadium or something, which they easily could have done. I’m sure it has everything to do with the atmosphere and feeling good about the sound of a place. When I see bigger artists now or back in the day I’m always considering, like, why are they playing these small venues several days in a row versus just one big knockout thing. Is it a statement? I don’t know. It is sort of surreal but I feel like we’ve sort of gone on this slow trajectory. This band is the biggest band that I’ve had so far for this record but for many years it was just a four piece and it was very Velvet Underground kind of DIY. We didn’t have a sound engineer for a long time so, yeah, it’s definitely slowly built up to this.

What’s it like playing the late night TV show circuit? Pretty weird?
It’s always pretty weird. There’s just a million people walking around with walkie talkies and everybody’s supposed to be important. This last one this week was super easy and fun and a great environment and super professional. But yeah, you are waiting all day to play maybe a three-minute song. You get tired of the stress of just waiting. It’s not so much, “I’m going to mess up this song,” it’s more, “I don’t want to have to think about messing up this song all day.” If they were just, like, “Okay, you’re here. Let’s do it right now,” that would be much easier but the fact that they’re, like, “We’’ll get you in a couple hours to do your makeup.” Then you’re just thinking about it the whole day. I think it would be easier if you didn’t have to spend all day thinking about how it could go.

How has the response to My Woman been?
I think pretty good. We’re playing some of our biggest shows yet and this whole tour was sold out in advance so that’s a nice feeling.

What’s the story behind “Intern”?  You wrote it to fuck with people?
I didn’t write it to fuck with people. I kind of wrote it to fuck with myself. I just wanted to try something that would challenge me to write something different and I ended up really liking the lyrics so I decided to keep it on the record. When it came time to decide how the songs would go and the tracking and everything, it just didn’t seem right to throw it in the middle or end the record with it so the only option, for me, was to throw it up front and have it be a sort of disclaimer for the rest of the record. But yeah, it is kind of fun to drop that as a single because people are not expecting that.

Did it start as a joke and turn into something more special or were you laughing about it the whole time while writing it?
I was laughing about it because inside there’s still all of those other songs that are innately my style that have nothing to do with “Intern” that are still there. I don’t know. In my mind, on my previous record, some of the grungier songs have continued on this record and so when I dropped “Intern” I was thinking maybe you’ll be disappointed, maybe you’ll be psyched but just wait ’til you listen to the rest of the record because that is not how it sounds, you know? I think that was a cool way to start the record. It flows good start to finish. It was rough because I have so many different styles that I write in that require a different kind of setting for guitars and especially drums. We had a different setup for those drums for every song. It was a nightmare. Most records I feel like the producer is, like, “Let’s get this drum sound dialed in and that will be continuous and that will make sure this is an entire theme.” But I wanted to take that idea and throw it out the window and kind of have four drum sounds and kind of have four drum sounds repeat with each song that sounded alike. Like “Shut Up Kiss Me” and “Give It Up” have a similar tone, so I wanted those drums to sound similar. “Sister” and “Heart Shaped Face” and softer stuff like that,  I would want them to sound a little bit different. 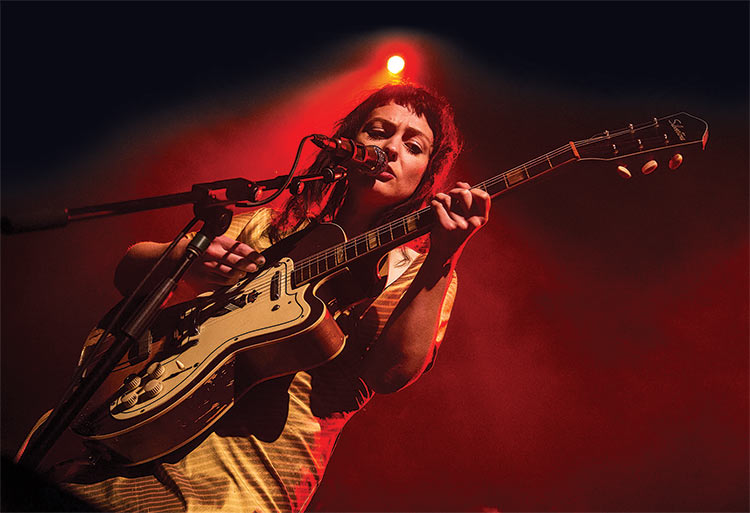 So we’re still within our first 100 days of Trump’s presidency and you’re involved with Our First 100 Days project. Can you tell us about this comp?
It was organized by one of my project managers who came to me and was, like, “We know you want to put out this 7" of these two songs that weren’t on the record.” We were all moved to do something when the election was happening. In fact, I was doing a bunch of press on election day and it was miserable. When I got home, everyone was talking about it and it was driving me insane hearing everyone talk about it. I just wanted to be a part of something that was doing something instead of just being bitter. Just taking a look back, I feel like people are really contributing to organizations like Planned Parenthood and moving forward instead of getting stuck and after doing the Women’s march it was really kind of an electric experience to be a part of that. Even if you aren’t politically aware and you were just going to feel good about yourself and post some Instagram photos. I’m sure some of those people will never forget how that felt to be around that many people who were upset and wanted something to change. So I just wanted to be a part of something that would put forth my money and things that I could be gaining towards something that is and will be losing funding.

Any advice to kids out there that feel like their voice is not heard?
I feel like for the first time our youth culture is becoming really, really aware of political stuff.  I guess all you can do is educate yourself and get involved. To not be a person who knows it all but somebody who has a plan and wants to go out and do something about it.

If you were a teacher what would be on your required-reading list?
I was obsessed with Ferrante for a long time but I don’t know if I would tell a classroom of kids to read it.

Well, thanks! I hope to see some of your tracks in skate videos soon.
Well, I recommend “Not Going to Kill You” or “Sweet Dreams.” If you ever want to put that in a skate video, it’s totally welcome.

Hell yeah. Let’s make that happen.
Cool, thank you for doing this.