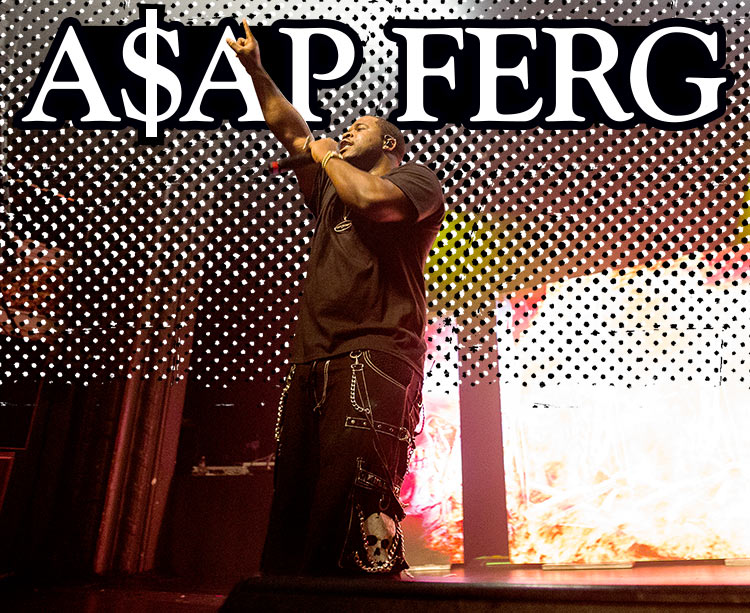 The A$AP Mob has a few superstars who all gained recognition from their mixtapes. Ferg stood out with his single “Work” on Lords Never Worry then went on to do his debut album Trap Lord in 2013. Since then he has blown up beyond belief. His newest album Always Strive and Prosper offers a closer look to who Ferg is and where he comes from. We recently caught up to talk about the new album, mosh pits and  Trump’s presidency. —Jordan Joseffer

Always Strive and Prosper opens up with “Rebirth.” Is this album a rebirth?
Yeah, I feel like the album is a rebirth. New sounds and a more developed me. More progressive, like a baptism. That was the whole theme of it.

What was your thought process going into this project?
The thought process was basically let my fans know where I was mentally at that state. Basically showing them my growth, telling them the story of my trials and tribulations and how I wound up where I am today. So I’m speaking a lot about old stories and family and letting them know my background. It’s really like a bio. of my life, an open diary.

What makes you strive and prosper?
A number of things. My family, one. You know, trying to create more opportunity for my family and my friends. Trying to do ground breaking things, create art. Making my name larger than life and having it live after I’m dead. That’s what makes me keep going.

What was your favorite collaboration on the album? Who were you most stoked to work with?
One of my favorites to work with is probably DJ Khalil. He’s a producer. He did monumental things of everybody. He’s one of those legendary guys. My first time ever jamming was with him. He brought in a lot of different musicians and we built songs from scratch. Made sounds and beats and sampled ourselves from scratch. That was the most fun process I would have to say.

“Hungry Ham” is about where you grew up in Harlem and you collaborated with Skrillex on the track. Do you think Skrillex could hang in Hamilton Heights?
Hell yeah. Skrillex is thugged out. I love Skrillex.

A$AP Mob always gets a pit going. When did rap adopt the mosh pit?
Well, you gotta look at Onyx and Wu-Tang and all of those guys. They was definitely moshing. If you look at the “Hate Me Now” video with Nas and Puff Daddy there was people moshing in the hood, like in the streets. We didn’t start moshing or invent it; we just kinda brought it back.

You guys even got a pit going in your “New Level” video.
I basically show what I want people to do. Like when I visualize the song and I write it in treatment, I’m, like, “Alright, I want to see sexy wrestler chicks. I want to see athletes. I want it to be like a Gatorade commercial/car commercial/mosh pit and song for all the kids.” So, like, these were all the things I had seen. It was basically like a big-ass commercial for what I thought the song went to and that was fast cars, sexy chicks, moshing and athletes. That’s what I was gearing the song towards.

Do you ever go to punk/hardcore shows and throw down?
I just did a party where it was bands and rappers. There were a bunch of hardcore bands that played. People were moshing and people were coming out bleeding and shit. That was my first time really experiencing that.

Has rap taken over your other interest like art and design or do you find time to do it all?
Rap basically took over my life. Rap is my wife; rap is my life; rap is everything. It’s kinda hard to find time to do other things. Once you go to something else, the rapping thing kinda slows down and I don’t ever want it to slow down.

How do you feel about Trump being the president? Are we fucked?
I don’t want to say that we’re fucked. I just think that us as a people, we need to always strive to do better for ourselves first. We can’t put all the power in one man’s hands. We gotta be the change that we want to see. It all starts with you. It’s whatever you want in life.

What’s next for you? How do you follow up Always Strive and Prosper?
I’m going to do a continuation mixtape called Still Striving which is practically done. I’m just mixing the stuff  now. There’s going to be a lot of turn up tracks on there, some fire songs. I’m going to drop that then I’m going to do another album.