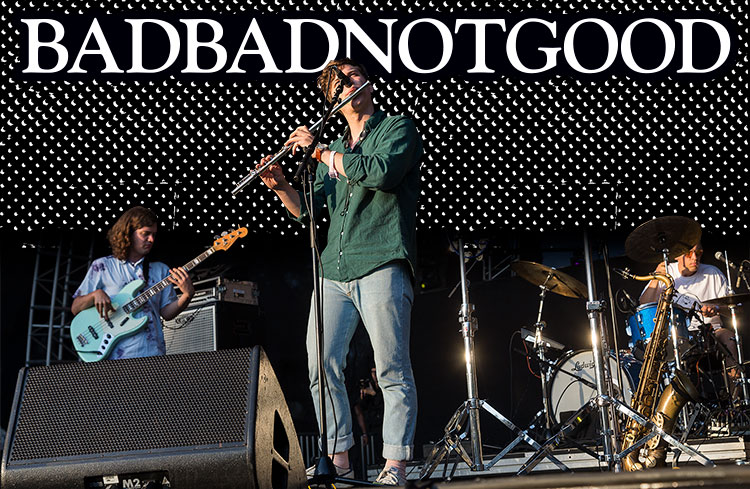 Don’t let the name fool you ’cause BadBadNotGood is quite the opposite.  They’ve been gaining a lot of attention and praise the past few years by doing some hip-hop covers in their own jazz flavor. As people started to notice, so did other rappers and they began collaborating with such artists as Kendrick Lamar, Tyler the Creator, Danny Brown and even did a whole album with Ghostface Killah called Sour Soul. Snoop Dogg worked with them on the “Lavender” track which has a video where Snoop pulls the trigger on a Trump-inspired clown which may have gotten them some unwanted attention. They’re bringing a jazz groove to a fresh, young audience. Chester Hansen, Alex Sowinski and Leland Whitty took a few minutes to talk amidst a bombardment of selfie requests from fans. —Jordan Joseffer

What got you guys into jazz?
Chester: I got into jazz through my parents. My dad listened to a lot of jazz and then I started playing and getting into bass when I was in high school, then picked up jazz through that.
Leland: Yeah, kind of the same way for me too. My parents listened to blues and soul and stuff and a little bit of jazz. Then just kind of wanting to get better at my instrument is what led me towards jazz.
Alex: Through my drum teacher, definitely learning the technique of playing jazz. Just wanting to play better and he was trained in jazz, so that led to me wanting to learn jazz and practice and play swing music and all of these kinds of things.

Are you guys hyper critical when listening to other music? Do you hate certain structures or if something is too simple?
Chester: I don’t think so. There’s an energy in music that you can find regardless of the technical ability of the people. It just depends on the meaning behind what they’re doing.
Alex: Yeah, there’s just parralells between good music and good vibes. Recordings of so much of different types of music have been made for so many years now and continue and people are still discovering new types of ways to blend sounds and ideas and things that move people and things that touch people, so it’s all there.

What’s with the Jim Beam percussion?
Leland: There was a wood block that we use for a few songs that got lost on tour. We always drink whiskey so there’s whiskey bottles around at all times, so we just took one of those and taped it to a cymbal stand and it was the best option to replace the wood block. Well, maybe not the best but the funniest.

Are you trying to work out a deal with Jim Beam?
Leland: Yeah, that’s my dream right there.

Did you guys receive threats after the “Lavender” video dropped or did Snoop get most of the blame?
Chester: No, but our manager got some weird phone calls, weird voicemails but we were mostly okay.
Leland: We got some criticism but no threats.
Alex: And we didn’t have anything to do with the video. It was made on their creative vibe and basis.

Would you mind if Trump got shot?
Alex: That’s not really a good way to go about anything. Peaceful measures is what we need in this time.

What has been your favorite collaboration project?
Chester: The whole thing with Ghostface was amazing because we got to tour with him and do a bunch of shows. That’s probably the longest running collab that we’ve had so that’s really special. There’s been a bunch of really cool ones. Working with Mick Jenkins was amazing.

Who would be your dream collaboration?
Leland: Kenny G. I don’t know, loads of people. As far as rappers go, Noname or YG—there’s too many people.
Chester: We were hanging out with Denzel Curry last night who we’ve jammed with before and played live with before but haven’t actually written or completed an original song with. He’s a super fun guy to hang out with so that’d be cool.

Do you see similarities between the flowing nature of jazz and the flowing nature of skating?
Alex: Definitely. Just like you have such a unique style with skateboarding, the way you do your tricks, the way you use your set of skills and basic functions, which is similar to jazz where you learn certain techniques but then you develop your own ideas and the way you want to improvise and create emotions with your thoughts and feelings with your instrument.  I think that’s very congruent with skateboarding as well as in terms of how everything comes together and then selecting the music for it  as well to create a feeling behind what you are displaying.
Leland: Yeah, well, skateboarding is a flowing rhythmic thing too. It works really well with music, as far as skate videos go. There’s the whole thing too as far as practicing a craft. You have to put time into it, develop it and learn a lot about yourself in the process. It’s kind of similar in that way. For the record, I am not good at skateboarding.