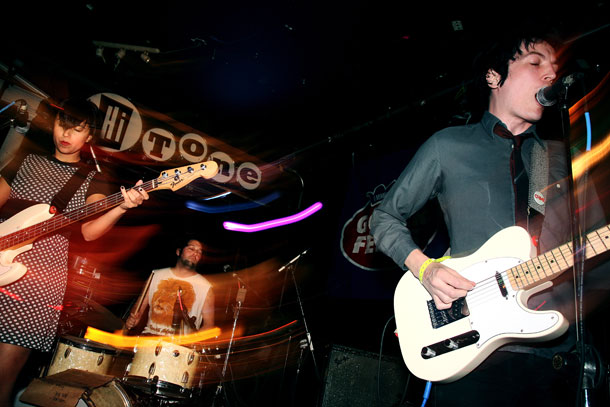 Posted: March 24th, 2009
"I don’t want to sound like the most pretentious twat in the world, but I was looking at this song from the perspective of a painter."

When did you start skating, Mr. Stix?
I started skating when I was 10 years old. I just followed my big brother into it. Skating was quite a counter-cultural thing. I grew up in South Africa; not a lot of people skated there. Surfing was the main thing in South Africa; but if you skated, you were really punk. Unfortunately, we couldn’t get any chicks doing it. We always stunk from skating in the heat.

What skate videos influenced you coming up?
Well, it was one of those situations where my friends and I had a dubbed VHS tape that we would pass around. The three videos on that tape were H-Street’s Hokus Pokus and Shackle Me Not, and Blind’s Video Days. Powell-Peralta’s videos were all right. But they were too commercial. If you wanted real street skating, you’d watch the H-Street videos. H-Street videos always had great soundtracks, too.

How awesome is that Sub Society song in Matt Hensley’s Hokus Pokus part?
I just got back into Sub Society because of Hensley’s part. If you go onto the Internet, you can download a lot of Sub Society’s back catalogue. There’s a ton of their songs in This is Not the New H-Street video, too. Sub Society fucking rules—like this metal/punk/prog hybrid band. Not too many people know about them.

Who were you skating with when you moved to London? What spots were you hitting up?
Luckily all of my friends who I skated with in South Africa moved here. There’s this weird South African group in the London skating scene; a couple of my mates got sponsored. In terms of spots—I skated South Bank right away. That’s a legendary spot. And then I skated in West London a lot. There’s a skatepark there. I also visited the infamous Meanwhile gap that Gonz ollied in Video Days. It’s funny that this Thrasher thing has come up. I met and went skating with Jake Phelps in San Francisco a few weeks ago. I was visiting there on holiday.
No shit!
Jake Phelps is intense: “Hey, where are you from? London? Oh, cool. Hey, you should hit this line over here…do you know these kids in London?” I was just like, “Fucking hell, man.” San Francisco is one of the best cities for skating in the world. My brother and I visited Hubba Hideout.

That spot is toasted now.
I know. It’s so rubbish now. But we were like, “Fuck Fisherman’s Wharf. Let’s check out what’s left of EMB.”

Did you go to Fort Miley?
No. Man, you’ve got to checkout Richie Jackson.

The dude who does a lot of hippie jump-type stuff?
Yeah, man. I was shitting myself watching his footage. He’s sick. He’s like the new Gonz. Totally innovative. He looks like such an acid burnout.

He looks the part. Jordan Richter lived it.
He had that section in Video Days and then slowly disappeared. He’s gone, huh?

From what I’ve heard.
What about Sheffey?

No idea. Only rumors. Apparently Ron Chatman is missing in action, too.
It’s so gnarly. Skating has a parallel with the punk scene. There’s no money in either of them. I mean, at least during the early 1990s. Now Ryan Sheckler can build a park in his own home; but around the time of Rubbish Heap and Video Days—you had to work or put something together toward your future. Same with music. It’s so easy to lose it all.
Lemmy: Mr. Stix is about to turn 30. Last week I sent him a bunch of pictures of geriatrics on skateboards I found on Google Images. 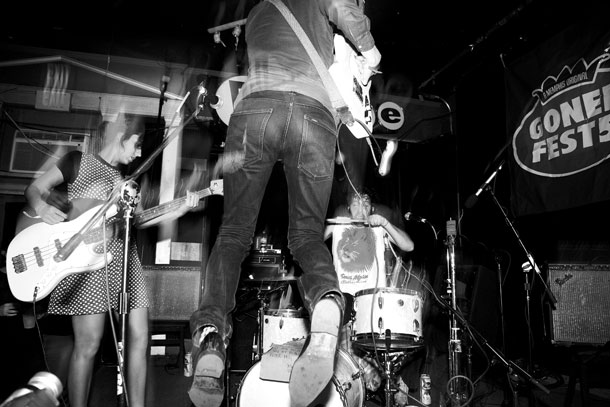 In skate years, Mr. Stix and I are 76. Lemmy, your first record (Blackout) is loaded with references to Phast Phreddie Patterson, Claude Bessy, and Dangerhouse Records. I’m from Los Angeles; most Angelinos I know aren’t into L.A. punk like you are. How does a kid from London get into L.A. punk?
Lemmy: Around the time of Blackout I was really into L.A. punk. This was in 2003—just before the period we live in now where everything is available on the Internet. The British Film Institute in London did a film season highlighting West Coast punk rock. They showed The Decline of Western Civilization—which I had never seen before. I saw all of this footage of the Bags and the Germs. I was also interested in these other clips they were showing of Crime, who were from San Francisco. The Decline movie really blew me away. Then I tracked down the Dangerhouse compilation record. The L.A. punk scene that Decline and Dangerhouse documented wasn’t codified. The genres came later—for instance “hardcore,” “straight-edge,” “queercore.” The Dangerhouse era, the possibilities just seemed wide open. Bands weren’t defined. There were rockabilly elements in X. Or take Catholic Discipline—which was a group fronted by a 30-year-old chain-smoking Frenchman (Claude Bessy) with a lesbian singer-songwriter on guitar (Phranc). I liked that whole idea. Blackout was like an imaginary compilation tape of things that I was excited about. And, again, I was really interested in L.A. punk at that point.

The last time we met was in 2007. You had just released your second record and were beginning an American tour with the Husbands. How did the rest of that tour go?
Lemmy: It was really awesome. Short and sweet. We just did the West Coast really. What was really great about the whole thing was meeting the Husbands. We were fans of theirs. We didn’t know them before that tour. We contacted them because we thought it’d be better to do a tour of the States with an American band; we were worried that no one would know who we were being from London. I was really surprised and honored when the Husbands wrote us back, telling us that they were into doing it. Then I suggested doing a split single together for the tour. And they were down for that as well. I was so nervous the week before we left. Although the Husband’s music is awesome, they could’ve been total assholes. Or totally weird people. I’ve toured with people who’ve made great music, but are incredibly difficult to be around. And the cherry on the cake was that the Husbands turned out to be totally awesome people. We are kind of friends for life. We did another American tour in 2008. Our bass player, Janie Too Bad, couldn’t do some of the dates because of her work. Sadie Shaw from the Husbands filled in. It was great. We did three weeks of shows with her, Goner Fest and some East Coast dates. And Sadie did a fantastic job.

We spoke earlier about your new album, Double Negative. You told me that you had spent a lot of time tinkering with this record.
Lemmy: Double Negative was recorded over a long period of time. Originally, the album was going to be very linear. I had most of the ideas for Double Negative before I began recording it. But I started to dislike certain songs; I dumped some of them. In the end, I decided to put together a compilation of the best songs I had recorded over the preceding 18-month period. Some songs have different directions. I couldn’t play guitar for a while during the recording of the album because I broke my wrist, so some of the songs are just me on an organ with a drum machine. I was also playing around with tape loops. Some of the tracks on Double Negative are angry punk songs; others have tape delays and repetitive riffs. Hopefully all of this stuff comes together as a cohesive album.

I really like the track “Backwards in Black.” Odd to think your broken wrist set that song into motion.
Lemmy: Yeah; when I recorded “Backwards in Black,” I was just really frustrated because I couldn’t play guitar. So I began messing around with old Black Time songs. The main bit of “Backwards in Black” is a tune from one of our old singles—played backwards through a 4-track recorder. I also added sirens from a record I found at a thrift store. They used to make sound effects records with fog horns and police sirens on them; they were created for amateur film makers to add soundtrack to their movies. You also get weird sounds when you play songs backwards. There’s a part in “Backwards in Black” where Mr. Stix is playing a ride cymbal—but it sounds like a siren going off. I don’t want to sound like the most pretentious twat in the world, but I was looking at this song from the perspective of a painter. It was like I was layering paint onto a canvas; I was interested in changing the texture of the song. I wanted “Backwards in Black” to have a transformative quality to it: creating a new song from preexisting tracks and sound effects.