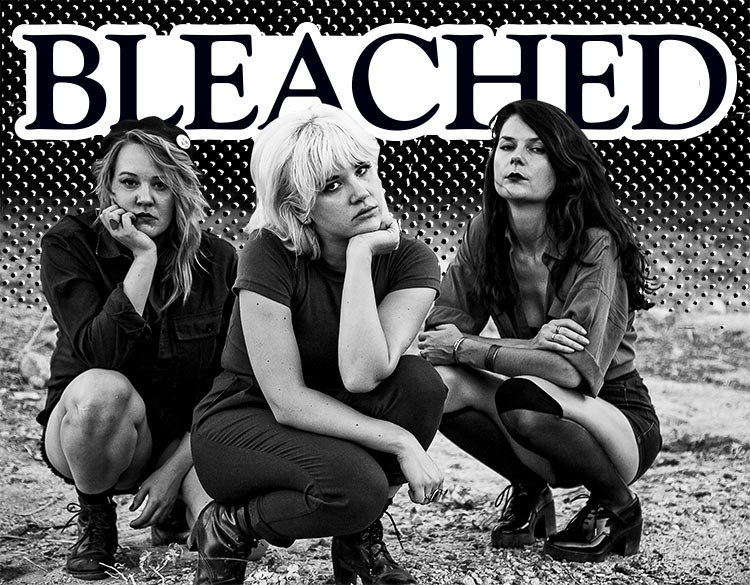 Released in 1992, the documentary Girls Bite Back featured artists like Siouxsie and the Banshees, Nina Hagen and The Slits, women that not only played punk rock, but embodied it. Sisters Jennifer and Jessie Clavin were drawn to their confidence, fierce determination and DIY spirit. It gave the So-Cal natives the courage to keep pursuing their dreams to start their own band. After the dissolution of their first one, Mika Miko, the girls formed Bleached in 2011. Along with bassist Micayla Grace and drummer Nick Pillot, Bleached is currently promoting its sophomore album, Welcome the Worms. Jessie and Jen took some time to talk about their upbringing, playing the infamous LA club, The Smell, and what Welcome the Worms actually means. —Kyle Eustice

I heard your dad was a guitar player. Was he an influence on you growing up?
Jennifer Clavin: I feel like when we were younger, our parents were really into doing Linda Ronstadt and Patsy Cline covers. I feel like I got into punk because I was rebelling against that. I didn’t really associate my dad inspiring me with guitar until I was older. Then it occurred to me, “Oh, my dad is the reason I got into music,” even though I was rebelling against him in the beginning.
Jessie Clavin: I feel the same way as Jen. One thing that was inspiring was having his equipment around the house. It was really cool to have our dad’s guitars he would make around the house that we’d play here and there. I feel like if we didn’t have that, I don’t know if we would have gotten into music.

How did you decide punk rock was it?
Jessie: We had some close family friends as our neighbors. I had been listening to a lot of K-Rock and what was on K-Rock at that time around ’95 or ‘96. But my neighbor gave me a Velvet Underground tape and the book. I was listening to the tape and listening to “Rock & Roll” by them and I just remember thinking, “Whoa, this is so cool.” From there, it opened me up to getting into more underground music.
Jen:I feel like with me I was in high school and didn’t have that many friends. This girl took me to my first punk show and she was blasting Bikini Kill on the way. It took me awhile to get into Bikini Kill. I didn’t like them at first. I got to the show and I remember seeing all of these kids with Black Flag shirts, Germs shirts and stuff like that. I was like, “What is that?” Then I remember we went to the record store, Headline Records, and I picked out this Slits record because I liked the cover. I bought that and put in on my record player. We both had them because they were in our parents’ garage. I put in on and was like, “Oh my God, this is amazing.” That’s what inspired time to start a band. I remember going in our parents’ garage with our friends and trying to cover the Slits songs, not even knowing how to record or what they were playing at all. We just played what we thought they were playing.

I credit record stores for a lot of my musical education, as well. When did you pick up instruments for the first time and really try to learn?
Jen: Jessie got a bass for Christmas in junior high.
Jessie: I maybe played around with an acoustic guitar when I was little, but I feel like when I got to junior high is when I was like, “Okay, I really want this bass.” That’s when I feel like it really happened—in seventh grade.
Jen: Then I saw Jessie playing bass and I’d try to play it a little bit. We were going to shows every weekend in ninth grade. I remember seeing this girl band, F-Minus, and for some reason, it didn’t occur to me until I saw this band on stage that we could have our own band. We went home that night and the next day, I picked up my dad’s guitar and was, like, “We are starting our own band. Let’s go.”
Jessie: Jen and I were living in the valley at the time, like, deep in the valley, around North Ridge, so if we weren’t at a show or got a ride to a show, we were at home and really isolated. It was so fun to get together and play music in our garage.

When did you feel like you could really turn it into a legit group?
Jennifer: We started our punk band Mika Miko around 2002 when we were about to graduate high school. I feel like we started playing The Smell a lot and the shows just started getting crazier and crazier. I feel like we didn’t know what to expect from Mika Miko and then we had so many friends’ bands doing well, and we realized there was a lot of room for the music we were making and being a part of the DIY world. I didn’t really know about it until I met a lot of great people at The Smell. I realized we could do it. We didn’t need to be on a record label where they’re going to give you thousands of dollars.

What made you decide to not keep going with Mika Miko and instead go in this direction with Bleached?
Jen: I think because we started Mika Miko so young, people realized they didn’t do things like go to college. And putting everything aside to do the band, that was never anybody’s plan. It got to a point where we were getting a little older now. We just realized it was time to call it quits. And Jessie and I really wanted to keep doing music as our career. We didn’t think Mika Miko was a band you could do as a full-time career, so we decided to keep playing together.
Jessie: Also, Mika Miko started touring a lot and some people didn’t want to be touring and traveling, and I think that’s what being in a band is. I think that was part of it.

Takes a type of person to live that lifestyle. Bleached was established in 2011. How did Micayla and Nick become a part of the whole thing?
Jen: For awhile we had so many different bassists and so many different drummers.  That was the thing with Mika Miko, if one puzzle piece was missing, the whole thing would fall apart. With Bleached, we decided to have full control of project so that doesn’t happen. It took a long time to trust Mik as a full-time member. She’s been around for three years now, so we decided she’s a member of Bleached. We met Nick at the beginning of the year, and I feel like Nick has been the best drummer out of all them.

I do too.
Jen: I feel like when I was going to shows when I really young, I would be so confused if I found out the girl on stage that looks like she’s in her 20s is actually, like, 32. It felt really old. Debbie Harry didn’t start until she was 30, so that’s crazy.

Do you get any flack from the guys?
Jen: Luckily, Jessie and I have always been surrounded by super supportive friends. I remember when we started our very first punk band called the Dead Banana Ladies, all of our guy friends were so stoked. They were fighting over who was going to be in our band. We told one guy, “We don’t know if you’re good enough to be in our band.” Ha!

So you had executive power then.
Jessie: I feel like I’ve had some weird experiences, but I’m not sure if it was because I was a woman or because they’re just some bonehead dudes that just aren’t listening.
Jen: One of my biggest influences when I was a kid was watching this VHS tape called Girls Bite Back. It was The Slits, Siouxsie and the Banshees, and Nina Hagen, and every one in the video was so sure of themselves. There was no question of whether they questioned themselves as women. Watching them as role models made me never doubt myself as a woman. Siouxsie does an interview and they told her she was one of the best female singers and she was, like, “Yup I know.” If a guy is going to put you down, I let it slide past me because hopefully being a strong woman will change their mind.
Jessie: I really do think Jen and I are so good at not letting that get to us. If that were to happen, we just try to laugh. We are really confident about what were are doing. We really believe in what we’re doing and each other.

Tell me about the title, Welcome the Worms.
Jen: We had been almost done with recording the album and we were desperately trying to find a title. It was important to find a really good one. I had been doing mushrooms with my friend all night and we went to this lake called Echo Park lake at 9am. This freaky religious couple handed us this booklet they had made themselves. It was super cut and paste. One of the things they cut, the words said, “Welcome the worms.” I thought, “Oh my God, this is the sickest title ever.” It summed up all the lyrics to me about, like, welcoming the dark side of life because it’s there and we should acknowledge it’s there and not push it aside because with it comes the beautiful part of life. Life would be boring without it.