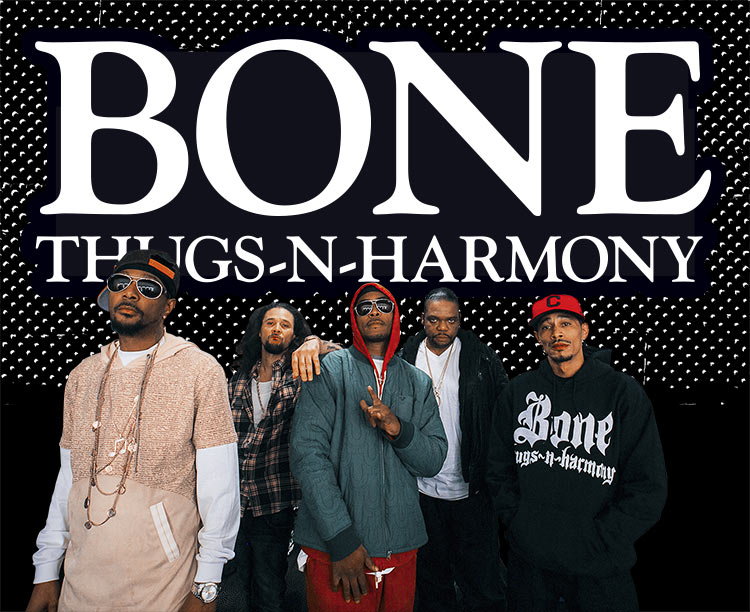 Bone Thugs-N-Harmony—Bizzy Bone, Layzie Bone, Krayzie Bone, Wish Bone and Flesh-N-Bone—just wrapped up a lengthy string of tour dates as part of Snoop Dogg’s Puff Puff Pass Tour. Although they hail from Cleveland, most of them have lived in California since the legendary Eazy-E brought them out to Los Angeles to begin their venture into the rap world in the early ‘90s. Since then, they’ve catapulted to international recognition and basked in the glory of their success over the past 20+ years. While there has been plenty of turbulence along the way, the five members have emerged stronger than ever and their familial bond is undeniable. On a break in Grand Rapids, Michigan, Krayzie, Bizzy and Layzie had some time to discuss tracking down Eazy-E, the first time they heard “Thuggish Ruggish Bone” on the radio and what it’s like going back  to Cleveland. —Kyle Eustice

How did you get Eazy-E to listen to you guys?
Krayzie: He actually called us. We was out in Los Angeles and got his number from someone that we was working with back home in Cleveland. He gave us the number and we kept calling the Ruthless Records record label every day. Kisha Anderson was the secretary at the time and when we would call, she would always answer. One day, she was, like, “I am going to make sure he call y’all back because you’ve been calling every day.” He called us back that day and Bizzy answered the phone, tossed it to me and said, “Rap.” I got to bustin’ and E was on the other line. I could hear him in the background and he was, like, “Damn, where did y’all say you’re from again?” We said, “Cleveland.” He said to hold on and he put me on hold then he put me on speakerphone with other people in the office, and he was, like, “Say that rap again.” I said it again and gauged people’s reaction in the background, and they were all, like, “What the hell?” From there, he let us know he had a show in Cleveland and we hustled up money to get back to Cleveland to try to open up the show. The person who gave us the number to Ruthless Records told us if we made it back to Cleveland we could open up.

Where were you at the time?
K: We were in LA trying to connect with Eazy.

Oh, so you went on a mission?
K: Yeah. We went to Los Angeles. We took one-way bus tickets to LA first and were out there for at least six months just homeless and bouncing around until we got the hook up. When we talked to him on the phone, that’s when we found out he had a show in Cleveland and we knew if we got to him on our turf, it’s a rap. We got back to Cleveland and got us to open this spot. After the show, after they performed, we blended in with them like we were part of their entourage and walked to the backstage. They stopped us at the dressing room, but we stood outside of it. We asked if we could rap for Yella. Eazy heard us and stuck his head outside of the dressing room and asked if we were the dudes from Cleveland that had been calling him. He brought us back from there.

What initially made Eazy-E the guy you wanted to get in touch with?
Bizzy: First of all, nobody was messing with him too tough. He had the odds stacked against him because he was going through a little somethin’ somethin’ with a couple of his band members. It was all of those things that culminated and he’s not only the right person to be around because he’s one of the creators of this hip-hop music, but he’s also really in a position to where those with talents could help him rise to the top. To us, he was always rich, but we were business-minded young men. We looked at the playing field and we approached the game to where we contacted everybody. Little Layzie, he would buckle down. He was our business man and the first one with a briefcase. He was calling everybody. Everybody got a phone call. We had a cool connection in Cleveland because we had already put out an album by a brother named Diego. We got in touch with Eazy through the secretary Kisha and—booyah—we made it happen.
Layzie: Eazy-E was known, but he was also a CEO. He was the Berry Gordy of our time.  We always loved N.W.A and Eazy being the  boss, at the time, he was the underdog. Dogg Pound was tearing their ass off and we felt like we were better than them. We needed some competition. We wanted to be in position to be  the best because Dr. Dre was killing it.

What had you so determined initially to make it? I’ve been to King Kennedy projects in Cleveland and it’s rough.
K: One was because the love that we had for music and we loved making music. Cleveland is like inner city all over. The drive for me was to get out of that place. You see, the weather too. It’s dark and gloomy the majority of the year. It’s depressing and easy to get caught up in the bad things there. If we didn’t leave and take that bold chance, we would have never done it and been stuck here for the rest of our lives, so we thought we might as well go see.

Did you envision this kind of longevity? Rap groups nowadays are spit out faster than you can say LL Cool J.
K: It’s crazy. We honestly never imagined it would be like this. We was so caught up in the thought of just making it—being able to make music. We wasn’t thinking about nothing else that came. We were so in a spell just by Eazy-E coming to pick us up every morning. Every time we got in the car, we’d be, like, “What if we woke up and it was all a dream? We’d be pissed.” When the success came, it was kind of overnight. I remember our song hit the radio. I remember when Eazy called us and told us to turn the radio on because they were about to play “Thuggish Ruggish Bone” in California. We turned it on and we were in the hotel just losing our minds. I think we tore that hotel room up that day. We tore the room up and then two weeks later, we were number one all over the country. Everything just started changing. From the success, it shocked everybody. It was the real deal. We were like serious superstars. We still had a street mentality and we didn’t understand what was going on because it  was going so fast.

What did success look like at the time?
L: Success was hearing us on the radio for the first time. We recorded the album and E let us go home for minute, so when the song came out, we were in Cleveland still riding the local MTA bus. We were on the bus when somebody came by in a dope-ass car playing our music and we were going crazy on the bus, like, “That’s us.” They were, like, “Nigga, that ain’t y’all. Get the fuck on up outta here.” But it was us. We were going crazy on the bus.

I remember when E. 1999 Eternal came out. How did you even come up with the idea to do these harmony-based raps?
K: I always had the singing there, but when I started rapping the harmony came from when we got together and we started rhyming together all the time. We’d be walking down the street, talking about what we were seeing, just busting. We did it all the time—in my mama’s basement—anytime we’d have smoke or drink sessions, it was a flow session. We started to learn each other’s verses and the other four would just ad lib and it would sound like we were harmonizing. People thought we sounded like some old doo-wop group—like the Temptations or something, but we were rapping. People used to tell us in the hood, “You’re like some broke millionaires. As soon as someone puts you on, it’s over.”

What’s it like when you go back to Cleveland to your old spots before you were famous?
B: It’s like a round of applause when we get there. First and foremost, the fact we made it and are going just as strong as ever still to this day, it shocks people, but pleasantly. They want that feel-good story.