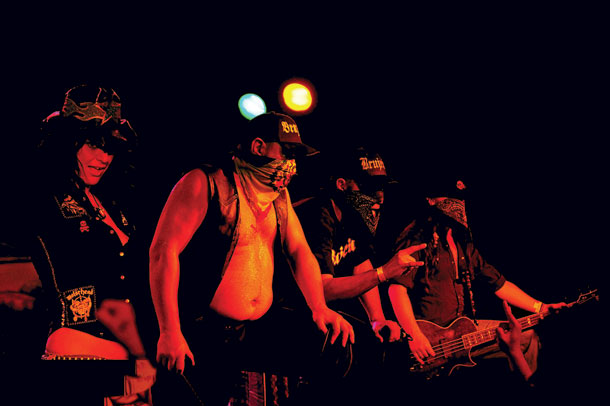 If you’re not familiar with the Mexican death metal band Brujeria, rumor has it that they’re narcotic-trafficking, Satanic, anti-Catholic revolutionaries. Whether or not this is true, Brujeria thrash in solidarity with indigenous Mexican struggles against the repressive Mexican government.    They’ve been suspected of partaking in the narcotics industry, which is historically a trade that operates in impoverished and sanctioned communities as a means of survival.

Nonetheless, it’s a violent and bloody trade, probably due to clashes with CIA drug routes and competing cartels. The members of Brujeria cover their faces with ski-masks and bandanas at shows to avoid potential identification by state agencies looking into their previous “business transactions,” or maybe even unsolved murders. But suspected pastimes aside, Brujeria play with an intense, violent brutality that, with the right crowd, would probably result in politicians being hung from lamp posts.

As expected, the Portland show was fucking sick. Violent blast-beats, machetes, and suspected masked drug dealers singing in Spanish—what more could you ask for?  After the show, drenched in sweat and  slightly battered, I pursued an interview with a bunch of masked dudes packing machetes. Brujeria consists of an unknown number of mysterious rotating band members, but the aliases of the members who played tonight are El Brujo (vocals), Fantasma (vocals), Hongo (Guitar), El Cynico (Bass), and  Podrido (Drums).

After reminiscing about skateboarding and how Black Flag, Code of Honor, Negative Approach, and other skate rock bands played a substantial role in Brujeria’s inspiration, Fantasma—who’s wearing a Black Label sweatshirt— admits that the song “La Migra” is based on lots of Black Flag beats and riffs. In fact, Fantasma’s first memorable skateboard was the Black Flag Skull Skates board. He had a Z-Flex in the late ’70s, too.

The song “Anti-Castro” has received a fair amount of criticism, considering the pro-Zapatista and revolutionary agenda within the band. However, according to Fantasma,  who lived in Cuba a couple years after Castro’s rise to power, it soon became clear that the state of affairs was “more about the Soviets and less about dethroning a dictator.” In other words, the Cuban revolutionary regime was about pleasing the communist regime in  Soviet Russia—and soon there was no room for dissent. “If there’s no freedom or room  to grow, you can’t use your mind in a creatively,” he says.

Although Fantasma recognizes the current accomplishments in Cuba (high literacy rates, health care, higher education), and remains proud of his Cuban heritage, he stresses the danger of eliminating speech and the right to voice dissent. He draws a comparison between the social control mechanisms of anti-Americanism during the Castro regime and  the way the United States uses the term “terrorism” to ignite fears—especially  against Mexican immigrants—under the US Patriot Act.

Being a gnarly band of suspected drug lords, I thought it fit to ask them about the drug  and border violence occurring between the United Skates and Mexico, and how it affects the band.

This led to a series of stories about run-ins with border patrols, los Federales, and the Mexican military—throwing joints out the window at surprise check-points, then getting let off by Texas agents in exchange for autographs. One time, a soldier at the border fanned out on the band and shouted, “Matando Gueros!” It seems like anyone else would have a nervous breakdown at these check-points, but El Brujo and the others laugh when they tell me about how the police treat the band: “Cops bring us weed when they find out we’re in Mexico,” he says. “You know, a couple pounds with seeds  and trimmings. They  had probably just  confiscated it.”
© 1981–2021 High Speed Productions, Inc.