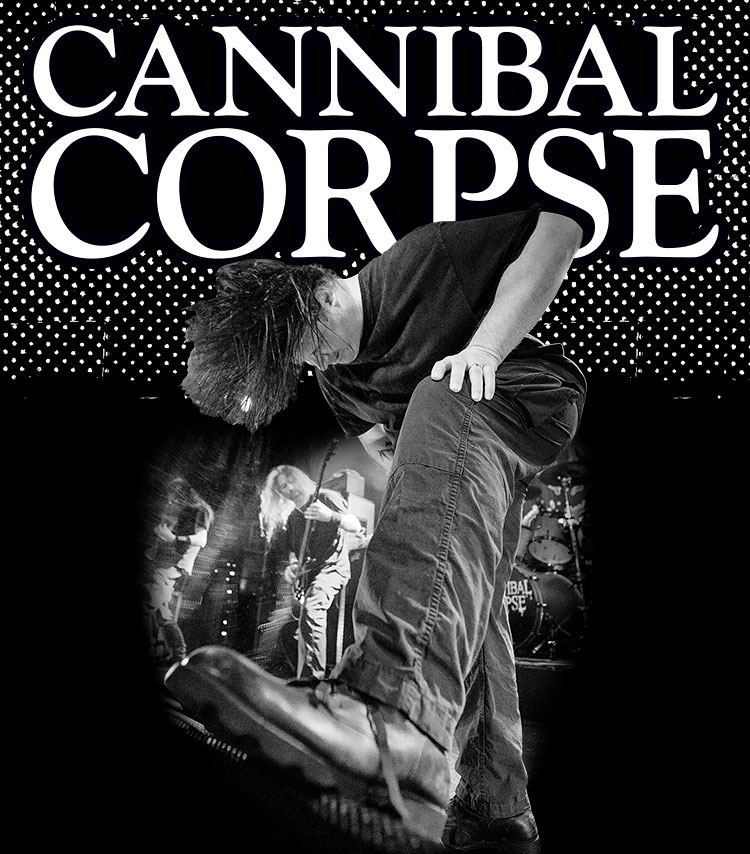 Born in Buffalo in 1988, Cannibal Corpse is one of the true titans of death metal. Their technical musicianship, catchy hooks and monster vocals deliver horror themes that have gotten them banned from multiple countries around the world. Singer George “Corpsegrinder” Fisher is a comic-book fanatic, Golden Rule practitioner and dedicated family man and he was stoked to talk to Thrasher. —Nate Denver

When was the last time you had short hair?
I think seventh grade? There was a lady who cut our family’s hair and I’ll never forget sitting in the chair just growling, so mad because I was like, “No, I’m not doing it!” They had to tie me to the chair because I was so infuriated.

What music outside of metal do you like?
Punk and hardcore, but that’s all in the same bag nowadays. Old country is a huge love of mine.  I was a big fan of the Cranberries. I like a lot of old rap, NWA and stuff. It just depends on the day.

What punk stuff? Black Flag?
Yeah. Black Flag is great. I really grew up more with the hardcore bands like Agnostic Front, Gorilla Biscuits, Youth of Today and Warzone. But yeah, Black Flag, The Exploited, Dead Kennedys—matter of fact, a few years ago Jello Biafra came up to me, like, “Hey, man! You’re the singer, right?” He was so awesome. He was, like, “You guys piss off all the people I hate!”

Have you ever felt uncomfortable about Cannibal Corpse lyrics?

Nah. We’re a death metal band. I got two daughters now, and we’ve got songs like “Fucked with a Knife” and “Stripped, Raped and Strangled” It’s pretty heavy stuff, and I think a lot of people think we’re insensitive to stuff like that, especially in this day and age when you’re supposed to apologize for everything you do because of someone’s feelings. Look, we’re a death metal band; it’s horror-movie-type stuff.  It’s fiction. It’s not real. We’re like Stephen King with music. Sometimes people point to some of the things I say, and sometimes I’m a little harsh with the things I say on stage, but I just hope they put it together that I would never condone anything like that. I have two daughters and I would protect them with my life.

Are you still banned anywhere?
Russia. We’re not allowed there. We went there and a guy in a church was against us. Half the shows were canceled so we just did signings for the kids. It’s the least we could do. It’s ridiculous. We’re a band and the charges against us are wrong. We don’t sing about religion; we don’t sing about politics. None of it is inspired by real life. It’s from our minds, but people are still—because we have these crazy album covers—acting like we’re trying to undermine society and create chaos. It’s like, yeah, we want all our fans to commit crimes and go to jail so they can’t buy our records, can’t come to our shows and we have to get regular jobs. That’s our goal.

Does death metal calm you or fire you up?
It depends. When we’re on stage performing,  I get fired up! When the crowd goes crazy, that amps me up. When we play “Hammer Smashed Face,” that is the most energy in our show and, man, sometimes I’ll take a break from headbanging to see the pit going crazy. But there are a lot of bands I listen to. I have a lot of collectables in my garage, and I’ve been clearing it out. I have a little stereo that’ll distract me.  I was listening to The Crown and I was ready to kill. I was getting pissed because I wanted to stay focused and just clean up.

What kind of collectable stuff?
I have a Captain America shield, Thor’s hammer, Sauron’s helmet, Thor’s helmet, I have Frostmourne, which is a sword from World of Warcraft, a bunch of figures. I have an autographed John Elway helmet and a Johnny Unitas helmet, the Lego Death Star. I probably have 70-plus boxes of Legos that I bought on clearance at Target that I haven’t even built yet.

Does your wife like metal?
No. When we were younger I’d be like, “Listen to this. It’s the new Deicide. You’re gonna love it!” and she’d listen quietly and I’d be headbanging, veins popping out, screaming all the lyrics. She’d be like, “Oh, good, honey.” I’ve been with her for 30 years this month.

Do you listen to her music?
When we hooked up she was into Anthrax and maybe Metallica, but she was totally into all the glam rock. I ain’t calling it hair metal, ’cause it has nothing to do with heavy metal. Stop! It’s rock ‘n’ roll and the dudes look like girls and good for them: Cinderella, Poison, Mötley Crüe. She loves Culture Club, too. We saw them in Orlando and I know the songs ’cause she plays them. If I played Deicide, she’d know it’s them. She knows us; she knows Morbid Angel. She knows more of the songs than she cares to admit, ’cause I’ve been torturing her with them for years. So vice versa, I know a lot of her songs. So we went to see Culture Club at the Hard Rock Cafe in Downtown Disney. I can respect all kinds of music. I respect what it takes to make it. If you’ve ever heard Culture Club songs, fuck! They did great. They were really good.

Do you have regrets or do you move on?
I wish I could. Yeah, there are things I regret in life that if I could do again I’d do differently.  I don’t dwell on them all the time. What’s done is done. If I was down on myself and reliving something I wish I wouldn’t have done, I’m probably doing it with my good friend Jim Beam—I try not to do that; it’s in the past; there’s no going back. There’s no time gem. You’re not Doctor Strange and going back in time.

Do you mind pain?
No! Spock tries to take Captain Kirk to God to get him relief from pain, but Kirk is like, “I need my pain! It’s what makes me who I am!” I always loved that. Then Bones says, “You believe in God, Jim?” And he’s like, “I don’t know. Maybe he’s here, in the human heart.” There’s some lines in movies that are so powerful.

What’s a quality you admire in people?
I like loyalty. For me, sticking with somebody through thick and thin. My family is really crazy. We’re from Baltimore. They’ve been involved in things they shouldn’t be involved in, like drugs. It’s hard to trust those people. I’ve had cousins steal money from me. If my parents read this they’d say I shouldn’t talk about it, but I wear my emotions on my sleeve and I tell it like it is. If I did it, I did it. I don’t get embarrassed. Put it this way, I heard that Nergal from Behemoth put in his book a part about us on tour in Europe when I shit my pants, which I did! I was drunk and I farted and I shit my pants. It was the fuckin’ Hershey highway at, like, ten in the morning, when I should have never been up. He was calling me Shitman for awhile. At first, when I heard it was in a book, I was like, “That motherfucker!” But in the end, so what?! It happened and I would tell anyone about it. It was funny. Going back to the question, I like loyalty and honesty. I’ve learned a lot in my 47 years, and now I just want to be the best person I can be. I want to treat everybody the way I want to be treated. I don’t want to look down on anybody because of their hair or their skin color or who they think they are. I don’t want to look down on anybody for the job they want to get and say, “Oh, you can’t do that.” ‘Cause I’ve been told that my entire life.