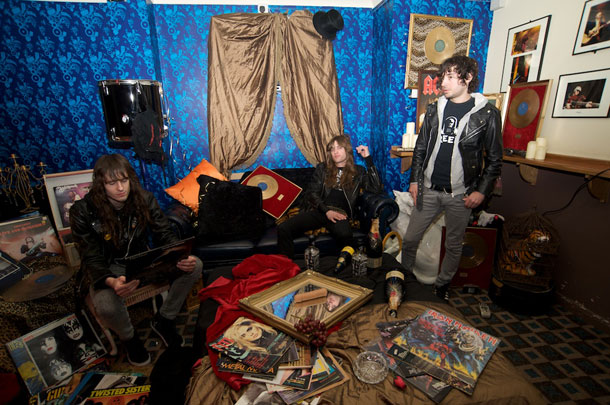 "We have a naked chick on the cover in chains. It’s awesome!"

If you’ve ever met Bill Weiss, you’ve definitely been entertained by his tweaked humor as well as maybe even seen his Metallica and King Diamond tattoos. I had no idea that Toronto possessed a heavy metal scene large enough to induce the old man to get a King Diamond tattoo, but it does, and doubtlessly a band by the name of Cauldron is still keeping the scene alive over there. -Jimmy Astleford

You guys are from Toronto, ever heard of Bill Weiss?
Bill weed?

No, Bill Weiss, he’s a good friend of mine from Toronto. He’s notorious for doing nude 540’s at vert contests worldwide as well as hurdling park benches nude in 411 issue #1. You better ask somebody!
Fuck, I should be aware of this guy maybe. “The naked Bill Weiss!”

Aside from growing up in the ‘80s, what influenced you to get into thrash metal?
It all started with Metallica blaring from my neighbor’s backyard. These guys were a bit older than me, but I really looked up to them. Everything they did was cool. They’d always have Megadeth or Metallica crankin’ in their stereo and they’d always be working on building this halfpipe or sanding down a Flying V or something cool. It just made sense. I always wanted to be a part of it but I was a bit too young, maybe 8-years-old then. Then came high school. It seemed like skateboarding had taken a different turn in the ‘90s, at least in the Ottawa Valley (near Ottawa). People began wearing baggy pants and there was more of a hip hop influence. There was less of a thrash vibe going on. I hated it because I was a metal head and I wanted metal to be a part of skateboarding too. It was pretty lame for me. Nowadays, I’m hyped to see the people that were influential to me when I was young bring it back and give that aspect of skateboarding to the kids. Skateboarding is a thrash type of scene.

Before Cauldron you were in a band with a similar sound called Goat Horn. What happened with that and how was Cauldron formed?
Well you’re sort of aware of what was going on with Goat Horn. Our guitar player and I had some differences. He wanted to do something new, but I didn’t want to do anything different. I liked what we were doing and we were sort of making a name for ourselves playing our classic metal style. We didn’t see eye to eye musically anymore, so we split, got a new guitar player and changed our name to Cauldron. We continued on doing the same thing. It was literally two days after Goat Horn broke up I was walking in circles at work trying to think of a band name. I wanted it to be really simple, easy to say and remember. Something like Carcass, I’m a big Carcass fan and I love their simple name. Cauldron was born.

What was a heavy winter like for you guys growing up?
A heavy winter entitled a lot of staying indoors jamming, getting rite fucked up drunk. It’s pretty easy to stay inside and jam when its fucking 20 below out. In terms of going outside, snowmobiling and snowboarding was pretty much it. Pretty much anyone that skates here in the summer is either snowboarding during the day, or getting fucked up playing metal in the basement. 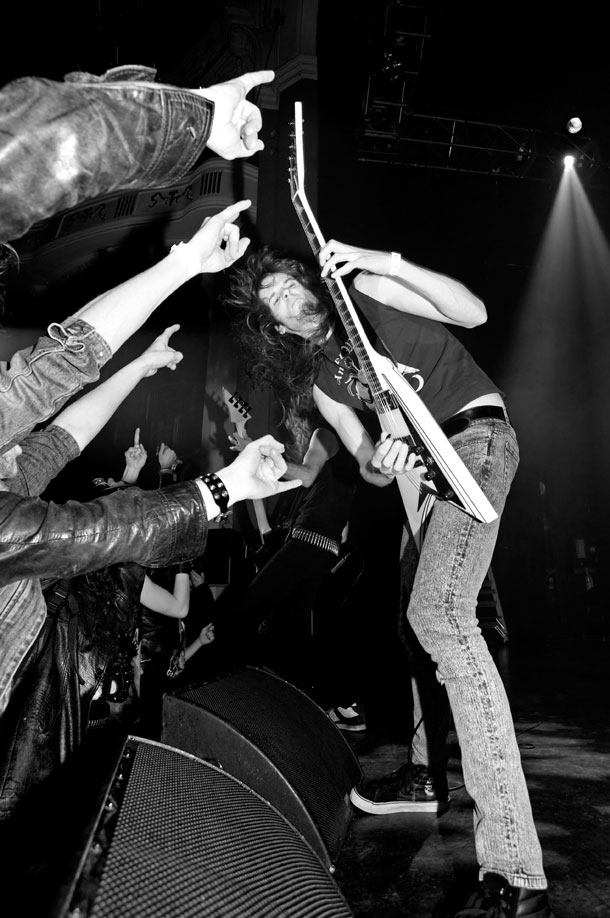 What are some of the subjects you guys touch on in your music?
For the most part we sing about our life and lifestyle. What were trying to do what we can’t do and what happens, harsh realities, life, consequences, and of course, unfortunate situations.

You guys were recently signed to Earache Records. How’d that come about?
Our EP, Into the Cauldron was well received and Earache was interested. After talking for a couple weeks they came to us with a deal. We negotiated with them and found some common grounds that we agreed upon. We’re about to go on a European tour in June and were in the midst of planning a US tour this August with a band called, Enforcer.

I’ve seen the Nuge rocking both Goat Horn and Cauldron t-shirts... Are you guys buds?
Don Nguyen is my favorite fucking skateboarder! About 5 or 6 years ago he was doing some sort of tour with Markovich and I was at a Kill Cheerleader show here in Toronto. We were all just raging, flipping pool tables and shit. I took a liking for the Nuge and we’ve been friends since. A few years later, Kill Cheerleader needed a guitar player for a mini tour they planned and I took the ticket out to California with them. We stayed with all the Hellrose guys. What I really liked about those guys was, they were the type of thrash skater group that I always wanted to be a part of as a young kid. Guys skating around with long hair, rocking metal shirts really not giving a fuck about what was going on. I loved it. I guess they sort of represent the skater version of us.

What’s the deal with the new album?
It’s coming out on May 5th in the US and it’s called, Chained to the night. Its got nine songs, two of which are 5-years-old, back to the Goat Horn days. We have a naked chick on the cover in chains. It’s awesome!

Any symbolism to the album title?
It goes back to lifestyle. We are chained to the night, were addicted to that lifestyle. Drinking beer, crankin’ records, wrestling in the basement, going out and finding hookers. We’re stuck in that cycle of the nightlife and whether we want to escape it or not, we can’t seem t. We live it.

Well, you’re making me want to go out and rage right now so we have to wrap this up, you want to shout at anyone?
Thanks Jimmy at DC for hooking us up with decent Chi-tops, which by the way, we need more! Make us a special Cauldron exclusive Chi-top! Thanks, Peace!