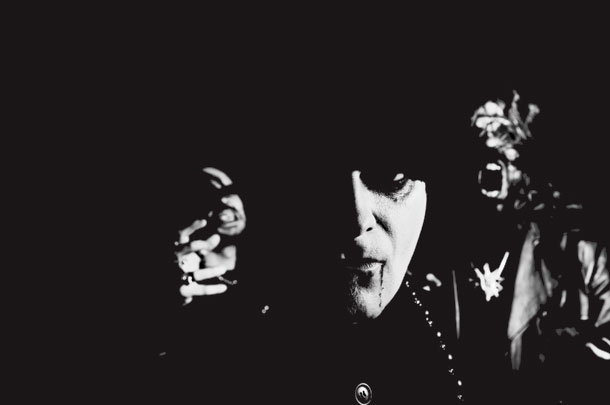 These days, every metal band from the ’80s is reuniting and recording new music. In some cases, it’s a blessing, in others a curse, but for Celtic Frost fans and metal in general, it’s a godsend. That’s an ironic correlation to make given frontman  Tom Gabriel Fischer’s disdain for organized religion, but regardless, it’s fitting. And unlike some of the other reunions out there, their long-awaited return doesn’t feel like a money grab. It’s as much a testament to the enduring friendship of the band’s two central members as it is to their strikingly original vision.

There are still many fans that vividly recall Celtic Frost’s unique blend of thrash, Goth, industrial, and classical music. Their creative pinnacles, To Mega Therion and Into the Pandemonium, generated sinister sounding metal, often with string or orchestral accompaniment. Born from the ashes of short-lived thrash metal trio Hellhammer and influenced by Black Sabbath, Celtic Frost was the only group with the balls to switch from a melodic rock song to an ambient soundscape to a thrash piece to a delicate string piece with female vocals on the same album. While they did go through a short-lived glam phase (and who didn’t, back then?), the band cranked out engaging, eclectic metal from 1984 until their disbandment in 1992, after which Fischer went on to form the similarly adventurous but more electronically-influenced Apollyon Sun. Now Celtic Frost is back, recharged and revitalized.

The Swiss group’s provocative new album Monotheist has been four years in the making. After guitarist/vocalist Fischer and bassist Martin Eric Ain reunited in 1999 and 2000 to work on reissues of the Celtic Frost catalog, they pondered the concept of making a new album, which began in 2001. “At first the chemistry happened very fast,” recalls Fischer. “But the chemistry as Celtic Frost took much longer. It was a very complex process to actually deal in the frame of Celtic Frost again after 10 odd years of not having done anything together and having lived utterly separate lives.”

Take a listen to Monotheist and it’s obvious that the trio, which also includes new drummer Franco Sesa, has retained its signature sound defined by dissonant Gothic riffs, snarling vocals, ultra-heavy rhythms, and an extreme metal aesthetic imbued with oddly melodic underpinnings. But rather than mimic the group’s thrashy roots, many new songs possess a slower, doomier vibe, integrating ambient passages, tribal drumming, and ethereal female vocals. That might sound like some of the trends coming out of Europe now, but as Fischer points out, Celtic Frost utilized those elements in their music 20 years ago.

The epic, multi-faceted Monotheist features the multi-tempo rocker “Progeny,” the melancholic, dirge-like “Obscured,” a requiem for strings entitled “Winter,” and “Totengott,” a creepy atmospheric work highlighted by twisted, Exorcist-style vocals. Ain says they were not rehashing the band’s glory days, but “going directly into the future to find out what we are about right now, what makes Celtic Frost now, and be as true as we can. This is what made up Celtic Frost in the first place, and this is what makes Monotheist a true Celtic Frost record.”

Even with diversity of modern metal bands, Celtic Frost remains sonically unique, and their staunchly non-conformist attitude doesn’t feel contrived like the manufactured rebellion of today, when Sabbath gets criticized for mocking The President in a concert video for their classic anti-war song “War Pigs”. Heavy metal seems to have become pro-Establishment.

“It’s a shame,” laments Fischer. “Metal arose originally from the clashes of youth with the government and Establishment at the end of the ’60s. Where has that energy gone, that act of rebelling against teachers and politicians?”

When it comes to questioning authority, Fischer has no problem expressing contempt for organized religion. He does not claim to know whether there’s a God, nor does he actively seek out proof. Ain has personal spiritual beliefs that he says have and will continue to evolve throughout his life, and he observes that we are on the cusp of a major culture clash between monotheistic religions that share the same roots. Monotheist explores the concept of what makes God within themselves and in society, and exploring those ideas in the secularized Christian world.

One person who understands and shares their dark vision of the world is fellow Swiss artist HR Giger. Fischer and Ain still stay in touch with the famous Alien creator, painter, and sculptor, whose artwork graced the cover and inner sleeve of To Mega Therion. Celtic Frost has been collaborating with him recently on merchandising, stage backdrops, and guitars.

“There’s a gargantuan respect in the band for Giger…an eternal indebtedness,” says Fischer. “At times when no one believed in  us, when our record company stabbed us in the back, Giger was there in a manner  beyond our comprehension. This continues  to this very day.”

Download Celtic Frost albums or songs from the iTunes store here or check out their myspace for upcoming shows.
© 1981–2020 High Speed Productions, Inc.