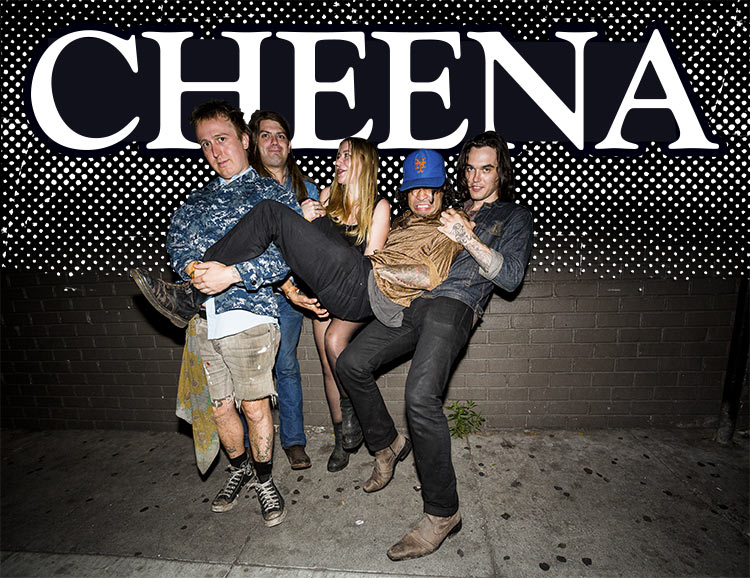 Thanks to a recent fest I had the pleasure of spending the weekend with Cheena. Long days and longer nights added up to a great time hanging with the group behind the killer debut LP Spend the Night With... on Sacred Bones. I was a fan since I heard “My Hand is Shakin’” off of their first tape and couldn’t be more stoked on the ten brand-new jams. Cheena is Walker Behl (vocals), Margaret Chardiet (guitar), Logan Montana (guitar), K (bass), and Eugene Terry (drums). The crew huddled together in an alley to talk about the band. Dive in and get lost. Interview and Photos by Jordan Joseffer

Lets start with the name: what does  Cheena mean?
K: It doesn’t mean anything, really. No one knows what it means.
Walker: We thought that it sounded like drugs or something.

That’s what I thought you were going for with the tape All the Cheena Money  Can Buy…
K: Yeah, or sex or anything.

You’ve been called both a supergroup and punk newcomers. Do you agree with either of those?
K: I hate them. I think it’s all bullshit. It’s real cheap.
Margaret: It’s lazy.
W: Well, the newcomers thing is just wrong and the supergroup thing is the most annoying thing ever. People started saying that from the beginning and booking us as headliners when we sucked and didn’t even have enough shit. We just got put into awkward situations. I would NEVER call myself that EVER so it’s, like, humiliating.
K: Also, we explicitly told people when we started not to say that or mention any of our other bands because we didn’t want to be self referenced.
M: We wanted it to be its own thing.

You said at your last show in LA people were calling out songs from your other bands.
Logan: They were saying some shit.
K: Well, the one guy that was circle pitting  during the first half of our set turned on us halfway through.

Like, “Are guys seriously not going to play that song?!”
K: Yeah, you’re not going to play a Perdition song?
L: He just wanted us to play faster and said it was pussy shit.
K: I’m already playing fast. That idiot.

A lot of people are also saying that the new record is “big city music from the gutters of NYC.” I would describe it as good music to listen to while walking around the Tenderloin or any drug and crime-ridden area. Do you agree with that?
M: If that’s in it, that’s something that seeped in throughout our lives opposed to something we were aiming to emote.
K: It’s not a subject matter that we are at all interested in talking about or singing about or sharing with other people. That’s like taking the most basic shit we did when we were teenagers. That’s the thing like when record reviewers or music business people come in and try to throw buzzwords just to attract people or categorize what we’re doing.
L: Or they just write about us based on the first thing they read about us.
K: Then they’re all referencing each other and it snowballs out of control. The whole thing with us and drugs—
M: You have people misquoting you from something that someone else misquoted you on from something you never said.

Sounds like a terrible game of telephone.
W: There’s a lot of subject matter that’s not necessarily about us. It’s just about shit. 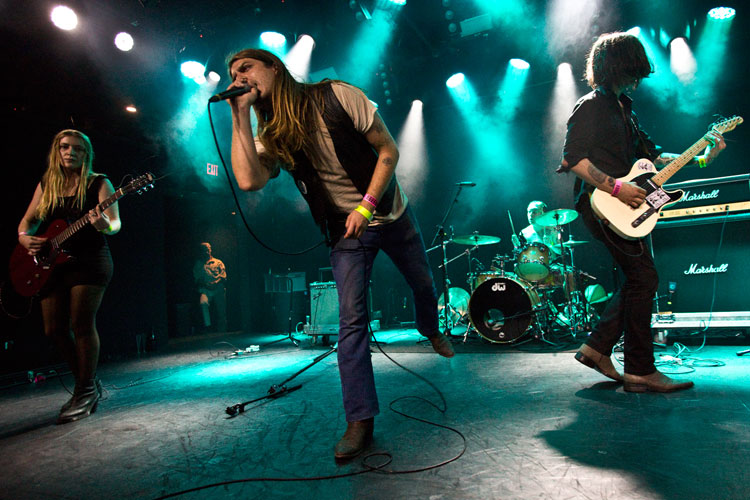 What are three things no one should trust?
All: 1. NYC condoms (the free ones). 2. Parents.  3. Children.

If someone were to spend the night with Cheena, what would they be in for?
L: Five loud people.
Eugene: Interrupting each other a lot.
K: Be prepared to get talked to.
W: Shut up!
E: We have a lot to say. It would be really annoying and they’d feel bad.
K: Italian dinner. We like spaghetti and meatballs.

Does the harsh New York winter make it easier to be productive with writing new music?
L: It totally does. That’s how we did this record. We just got our own rehearsal space and did it. It’s not some loose rock ’n’ roll party. We just all showed up to practice, like, four days a week, sober for the most part. It was like punching a time clock. We did the record during blizzards. We all showed up, no excuses, no one’s late and then at the end of the day it’s not like were going out to party. It’s, like, “Alright, I’ll see you at the factory tomorrow.”

Do you guys like cats?
M: I love cats. I know where you’re getting at with this. Walker loves to talk about torturing cats all the time.
W: Huh?

What’s up with the “Cats in Plastic Bags” song?
W: Oh! There was this family friend and her daughter used to take her cat and swing it around inside of a plastic bag and I always remembered that.

That’s the kind of thing serial killers do in their childhood.
W: Well, I didn’t do it! But she did.

What is she up to nowadays? Serial killer?
W: I don’t know; I haven’t seen her in a long time. I’m not saying she’s not.
L: Well, we do all love dogs.
E: I like cats more.

What are your future plans?
L: We’re going to do a couple shows when we get back to New York then we just signed on to do a European tour. Then another album and then get out of debt.
W: I think everyone is pretty stoked to start writing another one soon.

Cheena is currently on tour. Check out their upcoming dates here.