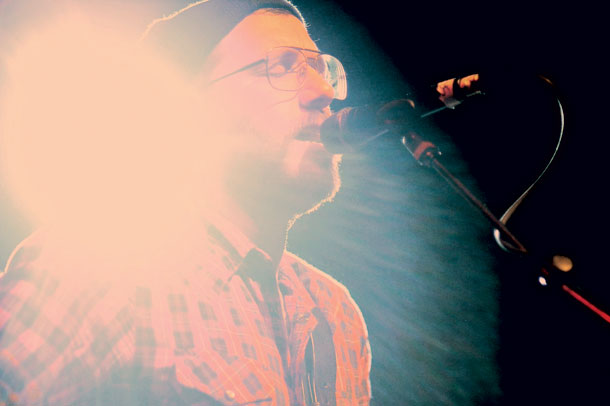 I met Dallas Green in October 2008. He was touring under the moniker City and Colour with his friend, in a small van that Dallas insisted on driving himself. His other band, Alexisonfire, has gone platinum and play arena-sized venues. Despite his huge career, going from buses and drivers to driving his own van was a welcom change. One day while I was backstage reviewing photos of Steve Caballero for a Vans book, Dallas caught a glimpse of my computer and told me how much he loved skateboarding. He considered himself a “skateboarder.” A bold statement, considering most musicians  who skate are just that—musicians who skate here and there, a mere hobby. Not Dallas. Although he thanks his parents now, he says at age eight, when they signed him up for guitar lessons, he was anything but grateful. “All I wanted to do was ride my board and play in the dirt.”
Didn’t you just win a Juno? And could you explain what it is?
A Juno is Canada’s version of the Grammy’s. It’s our big night in music. I won Songwriter of the Year. Which is pretty cool. It was cool  for my parents. For me, awards…I could  take them or leave them. It’s just good for  the résumé.

Do you get any prize money?
You just get a statue.

I know that you have done some  Warped Tours in the years past. What’s happened with those things? It seems like there used to be a lot more skateboarding involved.
Now there’s none at all. There’s a halfpipe and that’s it. I used to go when I was younger to the one here in Toronto. I’d see Neal Hendrix, Mike Frazier, and Paul Zitzer, and there was a street course as well—but now there’s just a little mini-ramp, and mostly it’s local kids who want to bring their boards  and skate.

How do you juggle your time being in two bands?
It’s gotten very difficult, especially now, because when I first started City and Colour  it was just a side project; I never thought anything would come of it, really. Now it has its own solar system. With Alexisonfire, we were here on this planet, and all of our people were working towards this one thing, and City and Colour was just a little glitch or star over here. Now it’s turned into its own black hole.  I feel like I need to dedicate time to it, to respect the people that bought the record and come to the shows. I feel obligated to go play for them and show them the attention they’ve shown me.

Do you see yourself getting to a point where you’re going to have to make some decisions between the two?  How would you handle that?
I’m sure that I will, because we’re getting older and I don’t know if we’re the type of band that’s like Bad Religion, who can just keep playing up until our 50s. I’m sure there will be a time when we are just going to realize that it’s not what it was anymore. We’re kids playing this weird style of music that happened to get popular and we rode the wave of success—we’re still doing that, and it’s still fun. But the whole City and Colour thing, in my mind, was always how I would finish off my musical career. Like my retirement plan was to sit down and play acoustic guitar, as opposed to running all around screaming my head off. I’m never going to make an Alexis record or a City and Colour record just because it’s time. I always want to be making records because I feel  the need to.

What was the transition for you from skateboarder to musician?
I started skating about a year before I began playing guitar. The first few years I really hated playing guitar and all I wanted to do was skateboard. My parents made me stay with guitar playing, but I stopped taking lessons and focusing so much time on it because all I  wanted to do was skateboard. In high school  I started meeting more skaters, and then it took up more of my time. But I continued playing guitar. There was a point where I realized that skateboarding wasn’t a future for me, that it  was always going to be a passionate hobby.  The progression I made in guitar as opposed to skateboarding was a lot quicker, especially when I started singing as well. It just seemed like if  I spent more time with guitar something would happen. Especially because there was some moment somewhere that I fell in love—head over heels—with music. I was still madly in love with skateboarding; still am. When a lot of kids would quit because they were like, “Ah, I’m not going to be pro so why should I keep skating?”  I would say, “Because it’s the best!” There was a point when I realized that just ollieing was as fun as trying to do something crazy. So I was able to leave it as it was.

Your wife says you sneak out of your house for late-night skate sessions.
If it’s nice out—’cause I do live in Canada, and there’s a lot of the year that I can’t skate. I never really think about hurting myself. I just go out and try to push as fast as I can and weave in and out of people coming out of bars and stuff.  I grew up in St Catherines, which is an hour from Toronto, and on school nights I’d be like, “Ma, I’m going skateboarding!” and I’d get in the car with the older kids and we’d drive to Toronto and skate until four or five in the morning.  I’d get dropped off and have to go to school,  and my ma would think I’d been sleeping the whole night. I’ve always enjoyed skateboarding in the middle of the night.

Do you still watch skate videos?
Oh yeah, of course. I remember the first few 411 video magazines—there were so many different segments with so many songs. The first time I heard Archers of Loaf, one of my favorite bands of all time, was in a skate video. So many bands, like fIREHOSE, and even when I was starting to get into the newer side of punk, bands like Texas is the Reason. Before the Internet, you had to watch the skate video credits and then go to the record store. If they didn’t have it I’d have to try and find it, being from a small town in Toronto. Now all I have to do is Google the skater and video.

Do you find that you’re still getting inspiration from the same sorts of things as when you were a kid?
Yeah. When I first watched Fully Flared, the opening song is an M83 song. I’d never listened to them, and I went and bought the record. If I had just randomly heard that song in passing, I probably wouldn’t have focused on it,  but because I was watching skateboarding it made me stay with it.
© 1981–2020 High Speed Productions, Inc.