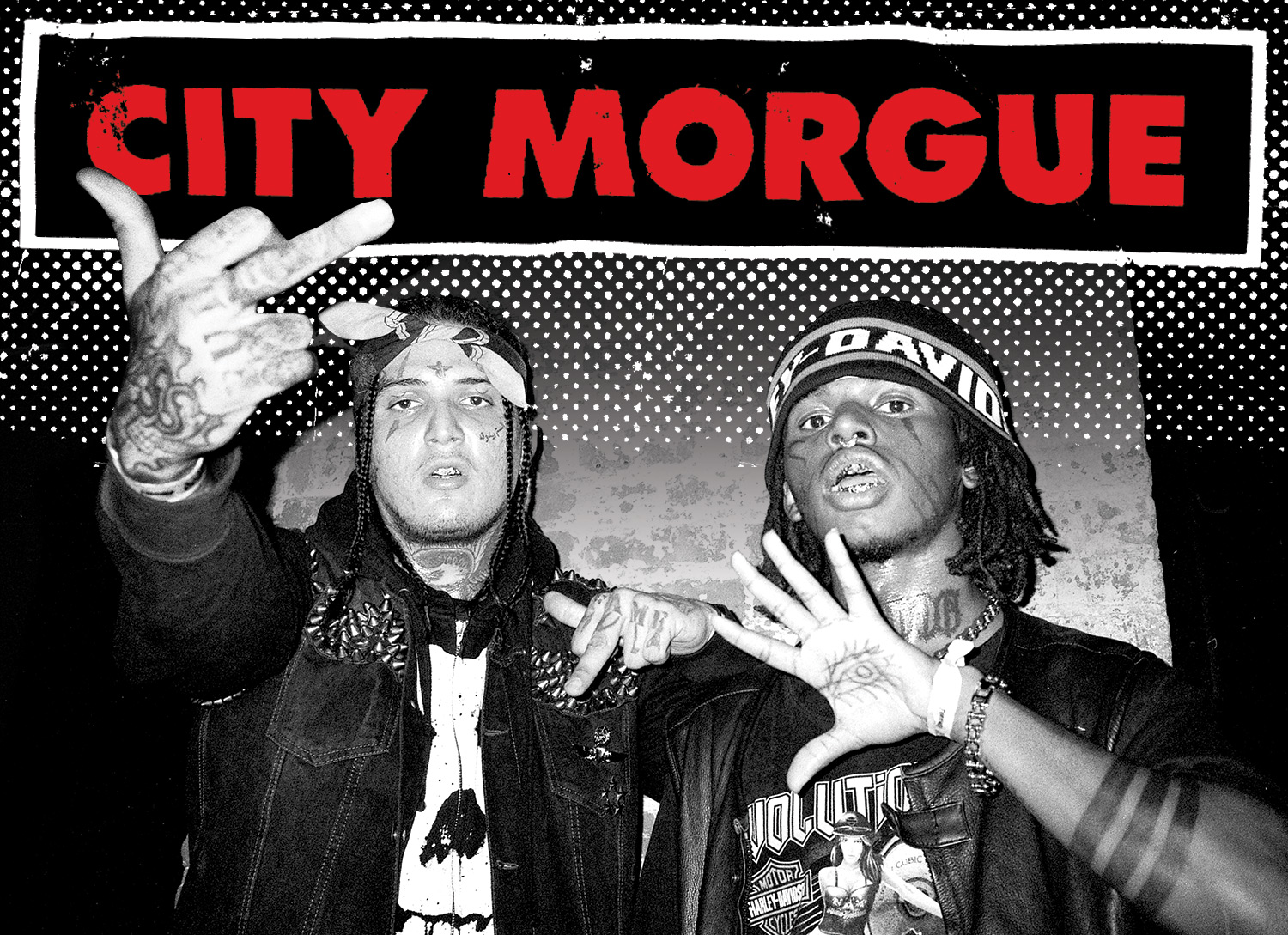 City Morgue is dressed like they’re ready to throw down in the pit while dropping beats that’ll blow out your speakers. SosMula and ZillaKami talk about their punk roots and their new, unique brand of rap. —Jordan Joseffer

Some of the punk bands you guys played with at Death Match were super excited to play with you. Do you guys like punk?
ZillaKami: I have a big history with punk music growing up and the sound and attitude we bring with our music is highly influenced by punk.
SosMula: Yeah, I fuck with GG Allin, Nirvana, Cobain, Manson.

I saw you rocking GG Allin, Crucifix and Misfits patches. Do you listen to those bands?
Z: Personally, I don’t like GG Allin at all. I don’t particularly support what he was for and don’t like the music. But as for the Misfits, I’m a huge fan, same for Crucifix.
S: Yeah.

Favorite bands?
Z: Now I listen to a bunch of Turnstile, Title Fight, Incendiary and Trapped Under Ice. But my favorite band switches every month or two.
S: I Don’t listen to that many bands, but the ones I do are Manson, Nirvana, Rob Zombie, Oasis, Weezer and Deftones.

What draws you to that style?
Z: Aggression that is portrayed in a melodic form is the greatest thing to me. And A1 vocalists.
S: NYC, the grimy, gritty New York City—it’s just natural for us so this has just always been our style. Most of the patches on our jeans aren’t even punk bands but it’s just shit we like. The style def came from crust-punk bands and ours is a remix of that.

How does New York shape your music?
Z: New York invented hardcore music. We are extremely influenced by hardcore.
S: Basically everything about it from the neighborhood I grew up in and the way I grew up is an influence. I wouldn’t be able to make the type of music I make if I wasn’t from NYC. This shit is just real life; we rap about what we see and live. So it’s all around us—the influence is just everywhere. NYC is lit, so—

What sets you apart from other rappers in 2018?
Z: From imagery to attitude to vocals to beat selection, we are different than 99 percent of rappers. The ones that are similar usually aren’t genuine and are just clones of us.
S: No one is doing what we’re doing. We’re bringing something new to this rap shit, a new genre and sound. Even when I do trap, it doesn’t sound like your regular trap music or regular type of music. Even when I do the trap shit it’s a new fucking sound. Nobody sound like me

What influences your music?
Z: Everything that I listen to every day: hardcore, punk, nü-metal, aggressive rap like DMX and Onyx. We are the children of that culture and era.
S: People I’m around, my friends. Listening to every type of music. Even shit like Instagram, a pair of jeans, a crazy t-shirt, listening to another rapper or artist. But for the most part my friends. We bounce ideas off each other. We influence each other

You have a lot of guns and drugs in your videos. Do you feel responsible for exposing that stuff to kids?
Z: I’d rather expose people to things than keep them amongst the blind. Kids who are sheltered who see shit later in their life usually are taken adrift by it, as to people who already experienced it who show no interest in it because its old news. You can’t stop a plague by sweeping it under a carpet.
S: Nah, I don’t feel responsible at all ’cause that shit is all over the Internet. We didn’t shoot the videos to expose it to kids, we did it to show motherfuckers our lifestyle and show people what we see in our life. We’re not tryna promote negative shit. We’re just showing how we grew up and what we’ve seen.

Hows tour going? How are people responding to your shows?
Z: Tour is crazy: injuries, sickness—but if you give fans a certain amount of energy they will send that energy back to you and I’d like to believe we’re the most energetic people to do it right now.
S: Tour’s crazy. Going better than what I thought it was gonna go. Fans know all the words; we’re getting mad new fans. Every show is out of control, in a good way.