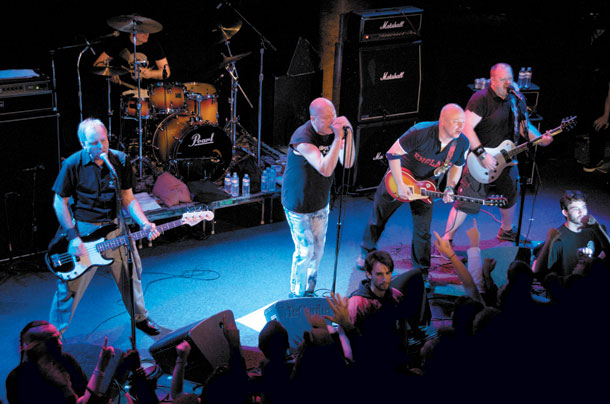 "If punk rock was ever needed, it’s needed now."

Cock Sparrer are lauded by many as they greatest Oi! band of all time. They’re like crack for street punks. Pirates Press just released Cock Sparrer’s newest record, Here We Stand, here in the US. To celebrate the label’s five-year anniversary they brought the boys over from London for a weekend of revelry and ruckus. By a stroke of luck we got Corey Duffel to interview the legendary lads. —Eben Sterling

Do you guys still take a postal bus around when you’re on the road?
Daryl: I’ve been in the band 18 years, and that was even before my time. I’ve never even seen the bus.

You formed in ’72 as very young friends. Did you go to the same school?
Colin: Yeah. We’ve all known each other since I was about 11. We were about 16 when the band was first formed. We’ve had a couple other guitarists; Daryl joined us about 18 years ago. We go way back as friends, and on that side of things that’s the most important. Sometimes the band is secondary—the friendship and the family side of things is the most important.

Why did you pursue music rather than a conventional job?
Colin: We did both, to be honest. We had to for a while, and anyone in the band will tell you they don’t make money that often. Most people have found in this business that very few bands will make a lot of money. As of now, the same thing applies. We still have to work to put food on the table. This doesn’t do it for us; this is a bonus. This is us having fun.

Did you have the name Cock Sparrer picked out already when you started?
Colin: We had several awful names that I’ll not share with you. Cock Sparrer represented where we came from in London. It was an old East London phrase; just seemed appropriate.

Were your fathers blue-collar factory workers when you were growing up?
Daryl: Most definitely, my dad was a truck driver and before that he worked on the docks in London. And the way they brought us up and the values they taught us are the same rules we apply to our kids.

In 1977 you guys had an offer to work with Sex Pistols manager Malcolm McLaren. Do you have any regrets about not pursuing that road?
Colin: No regrets at all. I honestly believe that, had we taken that route, we wouldn’t be here having this conversation now with you guys. It was a good thing. For us it was the best thing that could have happened. We probably would have been famous, but we probably would have been dead. This is fantastic for us, the way it all panned out.
Daryl: We can do things now on our terms. There aren’t many bands that have gone down the management route that, this far on, can do things on their own terms. We do things because we enjoy it and we like hanging out. There’s no pressure. When you got management pushing, they always have a different agenda. In the early days there may have been a glimmer of hope that the band would have success, but long-term, we wouldn’t be in the position we’re in now. And we’re really grateful for the position we’re in now. It’s for the best.

It seemed like you took a break from 1978  to 1982, and then came back to release  Shock Troops.
Colin: That’s something that happened on more than one occasion. We just took a few years off.
Daryl: Also, when there’s not a gig, that doesn’t mean there’s no Cock Sparrer. Come the weekend, all of our wives and kids are friendly. So there is still a social element where we’re all together and hanging out. Just because there’s not a concert where a thousand people are shouting and jumping around doesn’t mean Cock Sparrer as a unit doesn’t exist.

How’s the recession affecting the UK?
Colin: Greatly. I know there are a lot of people struggling to make ends meet, and it’s slowed down over the last 18 months to three years now. It’s time the UK comes out of the recession. We’re being told we’ve gone over the hump and such. It’s very difficult for most.
Daryl: But you always have the best creativity formed out of a downturn. If punk rock was ever needed, it’s needed now. When things are going good, you don’t write those angry songs and have that passion. When you’re fucking pissed off…  It’s not just in music, it could be in comedy.  You’ll find some good will come out of this.

Can we expect some new anthems soon?
Colin: We don’t stop writing songs. Before  Here We Stand came out, we were asked on many occasions to get in the studio and make an album. We never say never. We’ll get a batch of songs together again that we think will make a good album, that says the right things, and we’ll do it.
Daryl: We feel really lucky with Pirates Press. We did Here We Stand in 2007 in the UK, but it was only available as an import to the rest of the world, which means it was priced high.
Colin: We wanted it to be available as a domestic release in the US. Pirates Press stood up and said, “We can do that for you.” People in America are now able to buy it domestically. Pirates Press has done a great job, and now they are going to be re-issuing our entire back catalog. Everything from Shock Troops to our demos. —Corey Duffel
© 1981–2022 High Speed Productions, Inc.