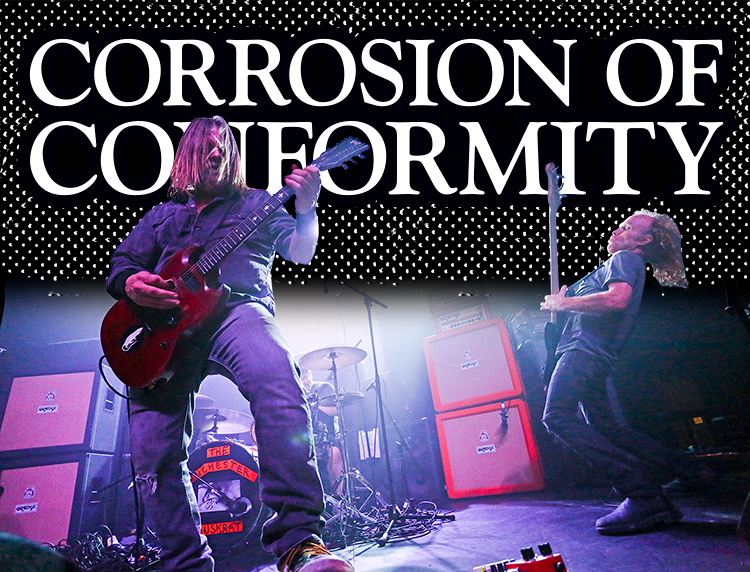 You’d be hard pressed to find a band more influential than Corrosion Of Conformity. Originally hailing from Raleigh, North Carolina, the band officially formed in June of 1982 when Reed Mullin, Mike Dean and Woody Weatherman were all just teenagers. C.O.C would go on to release the seminal Eye For An Eye album in 1984, thus solidifying the band as a force to be reckoned with in the burgeoning East Coast punk/thrash metal scene of the early to mid ’80s. As the ’80s came to a close, C.O.C eventually crossed over from punk/thrash metal into a more refined sound that blended groove metal with a bit of southern rock. Pepper Keenan joined the band in 1989 and was rhythm guitarist on their monumental album, Blind, released in 1991. Cut to 2018, after just releasing their tenth studio album, No Cross No Crown—the band is showing no signs of slowing down. Thrasher caught up with C.O.C. frontman Pepper Keenan this past spring before their final West Coast show with Eyehategod and Black Label Society at the Fonda Theater in Hollywood, CA. –Aaron Schmidt

Where’d you grow up?
I grew up in New Orleans. I was living at home during the early ’80s when the guys started the band up in North Carolina.

How did you originally meet them?
They played New Orleans all the time in the mid-to-late ’80s. We made friends from there and it kind of took off. I was 19 years old, playing in different bands at the time, and it was all through word-of-mouth.

When did you join C.O.C.?
In ’89. We were all friends and they were looking for a singer. I knew this girl who knew them and she was, like, “You should go up there and try out.” At the time, I was a band in New Orleans called Graveyard Rodeo. So I went up there and hung out for a while. I ended up joining the band as second guitar player and we did a record called Blind in 1991. That was some crazy shit. I ended up singing a song on it called “Vote With A Bullet,” and it kind of took off from there. Then we did the next album, which was Deliverance. It was recorded for this little record label—Relativity Records—on a tiny budget.

What was it like recording Deliverance?
We started recording it and we knew we were onto something. It started going in a certain direction once Columbia Records got a hold of it. So we ended up looking for singers, and then Mike Dean came back into the band. He was all, “Dude, why don’t you do it?” and I was, like, “Shit. Yeah, I guess so.”

Was it a conscious decision for the band to evolve from its punk/hardcore roots to more of a Southern rock/metal sound?
The way we were thinking back then, the hardcore thing was getting so stale. It seemed that everyone was doin’ the same fuckin’ thing, and for us to write the song “The Albatross” felt more punk rock than anything anyone was doing at the time. People were pissed off at us. But it finally felt real again. We were just evolving as musicians.

Were old-school punks or skinheads coming out to shows and heckling you guys?
Sometimes. And then ten years down the road, the same guys would come up to us saying, “Man, that’s a really fantastic record. I’m so glad you guys did that shit.” Otherwise, we’d be running around in a circle playing to the same people. At that time, Woody and I were just listening to ZZ Top and Black Flag, you know, just starting to spread out. It’s more challenging playing that kind of music, and it felt more hardcore than doing the same fucking thing over and over. We’ve kept the same mentality that we’d learned when we were kids.

What’s your favorite C.O.C. song that you weren’t part of?
You mean the early shit? I’d have to say “Loss For Words” off the Animosity album. That album was a game changer for me.

Are you still playing in Down?
We’ve all gone different directions—everybody’s just so damn busy. Down just started out as a thing to just have fun and it took a life of its own. We had a blast and zigzagged all over the place. It’s still on the list, man. It’s an open book that ain’t closed yet.

What have you guys been listening to when you’re on the road?
Lately, we’ve been tripping out on old ZZ Top—albums like Tres Hombres and Tejas.

Did you guys make some money in the ’90s?
Yeah, I made a little bit. It wasn’t anything to fucking write home about. I made more money banging a hammer than I did in those days.

So you’re a carpenter by trade?
Yeah, I flip houses and shit. I’ve been doing that since I was a kid.

Did you or any of the guys in the band skate growing up?
Fuck yeah. I used to work for Reggie Barnes at Eastern Skateboard Supply. I worked in the warehouse with Dixie Dave, the bassist/singer of Weedeater. Dixie still rips! I spent years working at Eastern and I still talk to Reggie. We used skate Swinson all the time back then. I still have my old, dirty as shit original Thrasher tank top from back in the day. It’s fuckin’ hilarious—I wore it during our whole tour last summer.

What was your first setup?
I had this shitty Dogtown Scott Oster. We had a fucking blast skating back then. Then one day I broke my fucking hip. I got more into playing guitar after that.

Were you a huge Lynyrd Skynyrd fan growing up?
When I was a kid, I hitchhiked to Muscle Shoals to see what was going on. When I got there, I hung out with Roger Hawkins—the guy who tracked all the Skynyrd shit. I begged him to play me the two-inch tapes from back in the day.

So what’s the story behind the song “The Albatross”? That was a pivotal song for the band, in my opinion. What’s the true meaning behind it?
It was just a riff that we had. I was talking with John Custer and he knew I was into Skynyrd. We actually used a Cooper Time Cube on the vocals, which is the same thing Ronnie Van Zant used on his vocals back then. It has a doubler on it, you know. Once we started fucking around with that, it was just a turning point for us—we realized we could do it. Before that, we were just pissed-off kids without any real direction, but once we wrote a song like that, we were, like, “Alright, man. We can do this shit.”

How does the new album No Cross No Crown compare to the Deliverance and Wiseblood albums from back in the day?
I think it’s just an extension of those albums. The last record I did with the band was In The Arms Of God and we just used that as a catalyst to start from. It just had to be real. I didn’t want to make a record that just sounded like a bunch of old dudes doin’ a money grab.

Would you say that the band is as political now as it was in the early ’90s?
I think the trick on that is to not stand on a platform and not date yourself. We wrote “Vote With A Bullet” over 20 fuckin’ years ago and Goddamn, it’s come full circle again.

If you had a chance to jam with any band from any era, who would it be?
N.W.A.