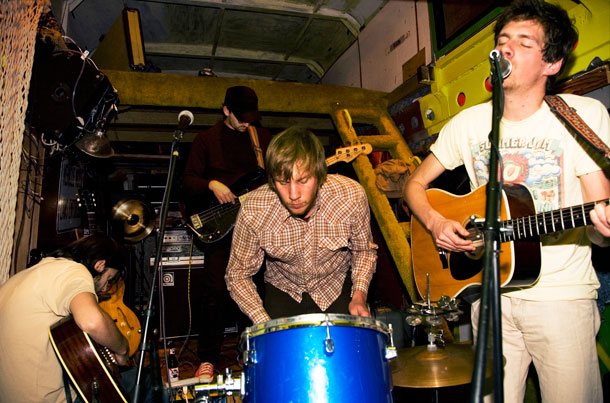 Beaches And Bridges, the second long-play album by Dame Satan, is a leviathan of a record that’ll displace mass amounts of air from your speakers, whether it’s creeping along or flowing with speed and soul. The sounds it contains are huge, surreal, and timeless, easily holding their ground when compared to your parents’ musical documentations of progression, folk, harmony, and psychedelia. Dame Satan congregate in San Francisco, CA via Virginia, Kentucky, and Pennsylvania. Four more examples of righteous bros channeling their histories and dimensions into sweet songs for the rest of us to witness. Read on as they testify to wayward whales (and their digestive tracts), being super natural, and making records that are as heavy as the airliners and bombers overhead.

Names, duties, and a condensed version of how y’all met.
Brendan: I’m Brendan Sheehan. I play guitar and drums. Come to a show if you really want to know.
Chopko: Michael Chopko, sexual bass, rhythm guitar, percush, vox, good vibes.
Greg: Greg Gheorghiu—electric lead guitar and lead banjo, vocals, drums, and supporting sexual bass.
Andrew: Andrew Simmons, I’m a singer and entertainer. I play guitar, usually acoustic, a bit of synth, and assorted odds and ends when songs need them.
Chopko: Brendan and I grew up in Alexandria, Virginia but never chilled. We almost fought each other for a good cause… Fast forward to 2002. Andy and I met through a friend of a friend, and our bond was solidified on a Mission rooftop drinking vino and yelling at the people below. Greg arrives and we start plucking porch jams. Brendan, our number one fan, vibed hard and we had to let him in the band. He took me from my lead guitar parts, but that turned out to be a really good move. The rest is, as they say, history.

And what about the name?
Greg: It’s like Satan, but as a Lady.
Brendan: It’s definitely gotten us played on heavy metal radio shows and gotten us billed with rockabilly-vibed bands. To me it fits the music and our vibe; I like the fact that it isn’t so easy to swallow.
Andrew: Dame Satan was a B-17 bomber, flown by the greatest generation this nation has ever known, downed in Belgium on March 17th, 1943.

You guys are playing a show inside of a bus in this photo.
Greg: There were all these crust punks with question marks hanging above their heads, but I think they dug it. All our gear is of sweet vintage so of course none of it worked right in the bus, so we did an impromptu acoustic set and it was awesome. I bought a ton of beer for that show ’cause I assumed the punks would want Tecates. They didn’t. Or they didn’t get that it was free or something. I kept trying to make up good single-serving cocktail inventions based on watery beer. The best is when you take the dregs of a Mojito—the mint leaves and ice and backwash—and pour Tecate in it. This is called the Brojito.
Brendan: I can see Thrasher readers getting into it.
Andrew: It’s the Jah-brone bev of choice.

Elbows and e-bows. Compare and contrast.
Chopko: They make sweet sounds. As for elbows, we’ve been throwing those at people for over four years.

What the hell’s an e-bow, anyway?
Greg: An e-bow is the sound of electricity passing through ambergris, which is the black gunk that forms around the undigestible beak of a giant squid in the belly of a whale. Ambergris is used in the manufacture of French perfumes and e-bows.
Brendan: “Electronic Bow.” Its a little device you hold over your guitar strings. It sends out a constant vibration which allows you to hold a note forever, and make your guitar sound like something other than a guitar.

Tell us about working at Zilla studios, where Beaches And Bridges was recorded.
Brendan: Nigel Pavao worked it and worked us. We, in turn, worked him a little bit, I suppose. Andrew: Completing the composition and arrangement of this album was, frankly, a struggle, but we finished strong—the album reflects both the struggle and our collective creative resolve. Chopko: We looked into our collective mind’s eye and in the very back we discovered a door. Upon opening the door, we discovered a magical world of sound where everything that was not an instrument was something edible from a taqueria. We tweaked knobs and jammed tacos until we were forced back through the door and onto the streets of San Bruno.

Zilla’s in the shadow of a flight path to and from San Francisco International Airport. Any plane spotting going on? Or righteous takes interrupted by air traffic?
Chopko: No, only shitty takes. I was haunted by this horrific thought for most of the recording about how easy it would be to shoot down a plane with a rocket launcher, but then I remembered—or maybe I never forgot—and kept that to myself. Our album is really an anti-war, pro-troop epic, and maybe that had something to do with the planes. Greg: I spotted some planes getting high in the fog. But the planes were my bandmates and the fog was the I-380 freeway underpass.

Favorite song on Beaches And Bridges?
Chopko: I dig “Downstream.” It’s a sweet, creepy jam. Makes me think of that scene in Deadman where the hunters are on the train and shooting at the buffalo. It’s the song an Indian would be chanting or dreaming up in his mind as he watches this bellowing beast rip through his pristine countryside and shoot at his mighty buffalo.
Greg: “Dawn & Delta,” because at the beginning of the third section there’s a thing that sounds exactly like two whales swimming up a river.
Andrew: “Ghost Dance” is good. “Oregon Trail” is good. My favorite song to play live is “Sirens,” our side of the split 7-inch we put out with our friends Two Sheds from Sacramento.

What would one most likely find Dame Satan, the touring machine, doing between the hours of 2:00am and 4:00am?
Chopko: Probably acting very natural.
Brendan: Kicking back with friends, getting emotional, listening to jams and talking about important shit… Generally acting natural.
Greg: The best was when we were somewhere on the Olympic peninsula in Washington and this girl took us to her farmhouse out in the mountains. She had a BB gun, so we shot at bottles in the yard for a while until we found her chickens, and then we played with the chickens for a long time and did a photo shoot with Brendan’s iPhone while drinking a bunch of champagne. We also chopped up a bunch of wood for the stove to keep us warm. Every night of tour is exactly this fun.

On the Ghost Mansion website, one can listen to some sounds that aren’t DS songs. What’s up with the skateboard recordings?
Brendan: I’ve been carrying a field recorder to record general sounds and live shows. I put a bunch of random sounds onto the ghostmansion.org site for people to listen to or download and use as samples or whatever. I think the skate sounds are from a skatepark in Port Townsend, WA. It sounded smooth and I had my recorder, so I decided to capture a bit. There also might be a sample of me skating the mini-ramp at The Hangar in Sacramento. It’s the best recording studio, mostly because it has a few ramps in it.
Greg: The new Potrero del Sol skatepark is approximately 150 feet away from the front stoop of Ghost Mansion, so swing by this summer and we’ll drink some Tecates and watch you do awesome tricks.

Tell us about Ghost Mansion. Are there really ghosts? Or are you guys the ghosts?
Brendan: Ghost Mansion hosts parties, shows, cook-outs, and chill sessions. We used to practice there. We recorded our first album there.
Chopko: One time, I was startled by the vacuum cleaner covered in a tee-shirt. We are not ghosts, but we act super natural most of the time.