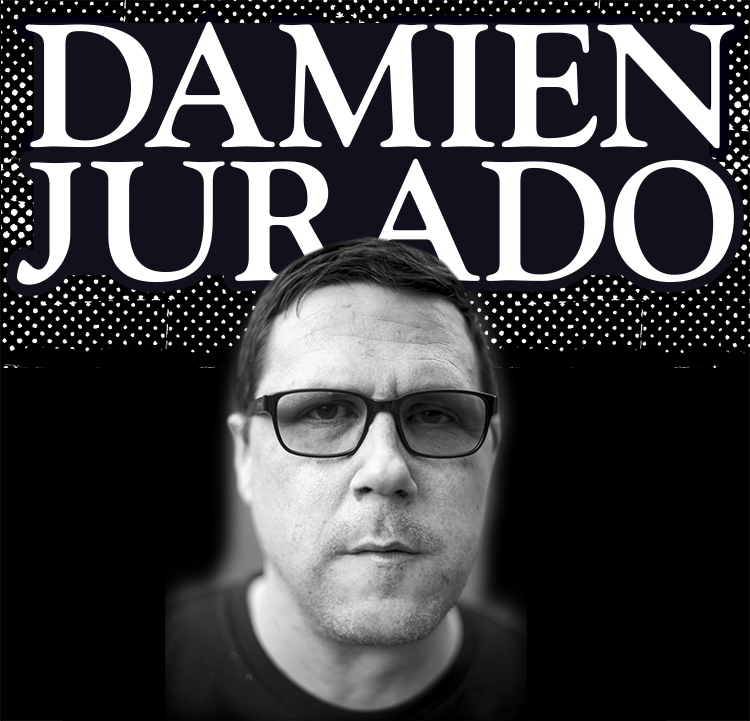 I’ve been listening to Damien Jurado’s music for years. He came out with his first album on Sub Pop 21 years ago and now has a dozen albums under his belt. Early on the sound was lo-fi and raw and although it’s since been polished up, the voice has remained the same. I would have never guessed he grew up skating the same way we did. I caught up with him on tour supporting his new album Visions of Us on the Land on Secretly Canadian records and found out he’s one of us! —Dan Zaslavsky

What’s up, Damien?
In 1987 I got a copy of Skate Rock Vol. 1 and I’ve been listening to those Skate Rock comps for the past week and then I got a request to do this Thrasher interview and I’m, like, “That’s so weird.”

That’s called perfect timing. Did you skate when you were younger?
I skated religiously. I started skateboarding when I was, like, ten. I was just skating on random generic boards. But my first real board was a Powell Peralta board, a McGill and that was in 1987. That was also the year that I discovered the Bones Brigade.

Where were you living at the time?
I was living in Houston, Texas, and at that point skateboarding was still very underground. I maybe knew three guys that really skated at that point. Even in Seattle I didn’t know many skateboarders.

When did you move to Seattle?
I moved in ‘86. Oh, but I was gonna say when I was living in Houston, I got into skateboarding the same year that I got into hardcore music. I saw this band called the Big Boys. They were from Austin and they played at a skatepark. I went to see them and that was the first hardcore show that I ever went to.

What came first, skating or music?
They came at the same time, actually. My love for hardcore and skating came at the exact same time. ‘Cause it was just, like, puck rock is associated with skateboarding, in the mid-80s especially.

Definitely. And I think in the years following that punk rock had the closest relation to skating. Right now I feel like it’s a smorgasbord of music genres that you could say relate to skating, but at that time it was very direct.
But even that changed because by 1990 or ‘91 it was associated so much with, like, straight-edge kids. Which is still hardcore music but it’s different. Before you had skate punk and now it was, like, straight-edge music and all the kids I knew went from looking like punk rockers and skateboarders to kids with hoodies.

How did the scene change in terms of skating when you moved to Seattle?
For me, it changed probably around the time I was—I want to say I was 16 or 17 years old. Okay, a little side note: this is Seattle that we’re talking about now. So my friends and I were skating through inclement weather all the time. And you’d hear those myths, like, “Rain’s gonna ruin your bearings; it’ll rust out your trucks,” but we never had that problem.

Well, probably shit was better quality back then.
I mean, maybe it was but skating for me at that point had changed because it was all about the trick. Before that it was just about skating; it was about riding around. It wasn’t about kickflips yet.

Right, then you’re determined to land something.
Yeah, pretty much. I mean, if you’ve got an ollie, it was good enough, you know?

So at what point did you start playing music?
I started playing music around the time that I was 15. I was in a punk band at 15 years old.

Did you ever get a skate injury that made it difficult to play music?
I did, actually. I ended up cracking my kneecap and got a hairline fracture through my shins.

All in the same slam?
All in the same slam. It was terrible; it was very excruciating. I’m very thankful that I didn’t need pins. I knew guys that would bail and they would need pins in their leg. I never did that. But there’s another reason why, like, I saw dudes getting injured with pins in their legs and most of those guys were ramp skaters or doing the bowls and I wasn’t into that shit. For me, it was just pushing in the streets.

Did your skating go any further after the knee injury?
It did. I continued to skate until I got my driver’s license. And I didn’t get my driver’s license until I was 22 years old. It was at that point when I started skating less and less. True story, man. It’s kind of weird.

When did you write your first album?
My first album was written around that time, 1995. I was 22.

So are we talking about your first album that was released?
Yeah, my first album Waters Ave S. came out on Sub Pop in 1997. It was around the time that I quit skateboarding.

It’s not like you quit skating but it’s just like all of a sudden something else consumed more of your time.
It was more music was my time at that point and I had a car. So those two things really canceled out skateboarding for me.

It’s kind of funny because I think that if you ask a lot of people our age, I would think that the car is either a make or a break. Either the car will allow you to be transported into new communities where there’s new shit to skate or the car will just break down the mold that once worked for you as a skater because that’s all you knew. That was your transportation.
Also, for me at that time, I remember moving to an area that had a large hill. I mean, Seattle is both flat and hilly; it’s a lot like San Francisco, actually. So skateboarding wasn’t really ideal. You had to go to the suburbs, you know, or where my parents lived at the time before I moved out of the house. The suburbs were all flat and you could skate anywhere.

So when you were first recording, it was electric, though, wasn’t it?
It was a combination of both acoustic and electric, yeah.

Do you think that it caught on—was it kind of geographically? Like certain areas you would tour to and be, like, “Dude, we’re in Omaha?”
Yeah, San Francisco was a city like that. Portland. Even countries like Spain, Scandinavia, the UK. Places like that. I didn’t get it—Florida.

So you still haven’t figured out a reason why?
No, I can’t figure out why it was. This was pre Internet even. I’m not sure why that was.

So as a musician, if you had to prioritize, let’s say music writing, song recording, album completion, self-satisfaction, fan satisfaction—for you, what’s at the top as a complete artist designing something and having a goal in mind?
For me, it’s just to create a good album. A piece of work. It wasn’t like that so much in the beginning, though. I have an album called Ghost of David, my third record, and that was very much a good glimpse of what I would do now. It was like a concept album that was also very much like a creatively-recorded record. The new records, especially the last four records I’ve done, have all been really pushing the boundary of the sonic level. So sound recording is a big one for me. In the beginning it was more about songs. I do like when songs are great—obviously they’re very important—but now a good song is only the tool to get me to have something to lay down and get into the sound world.
I’d like to say that I only like musicians where I dig the full album. Which, I feel like I’m being a music snob when saying that, but I might hear a song and be, like, “Oh, that sounds pretty cool but I want to hear the whole thing.”

You’re a complete-work dude.
Yeah, and if the whole thing does not satisfy me, that’s fine, but I probably won’t own it. If there’s one song that I don’t like then that’s fine, but it’s got to be, like, 90-percent awesome.
I’m the same way.

So you just released your 12th album. The last three have all been produced by Richard Swift. Do you feel like when you started collaborating with him that things took a change?
Oh, for sure. Yeah, for me, working with him I almost compare him to, like, my George Martin to the Beatles. He is my right-hand dude.

Do you work on the songs with him?
I come in with a complete song but I come into the studio with nothing more than just the song itself. I don’t know what it’s gonna be like beyond the acoustic guitar.

So I feel like in the last few years you’ve maybe pumped out records a little faster than the years before.
Yeah, it’s been, like, one every other year.

Has something changed? Do you really enjoy the production style so you want to get back in there?
I do. For me, I just love being in the studio. I love that aspect.

Are any of the stories in your songs actually about you?
You know I did an album called Caught in the Trees and that entire record was pretty much about me.

But you seem to have a habit of using fairy tales.
Oh yeah. I pretty much distance myself from it. Caught in Trees pretty much happened because of a real-life instance thing. Other than that everything is all fictional.

So are you in a sense first a writer just imagining stories?
Yeah, I think so. They’re always going through my brain.

When was the last time you had a real job?
Well, this is my real job right now.

But not being a musician.
It was 2010. I was a preschool teacher for nine years. That surprises a lot of people, but it’s true.

So you were doing both for a while?
I did both for nine years of my career.

And you were touring?
And I was touring. But back then I was only touring once a year and it was only for, like, a month and I would get a substitute teacher during that time. So I would do three weeks in Europe, three weeks back home in the US and that was it for the rest of the year.

I don’t know if I caught it earlier but you were saying you feel like performing is unnatural—
Oh, no. Touring is unnatural. Performing is fine. Because it’s like normal business people who travel, they’re only gone for a few days tops depending on what they do.

Have you ever been asked to do a score?
I did one just this last year for a film called Tumble Down. It starred Rebecca Hall and Jason Sudeikis.

Jurado is a Spanish name, right. And it is pronounced Her-a-do traditionally?
Yeah.

I’ve always said He-r-ado and people get confused.
It’s mostly for the whiteys.