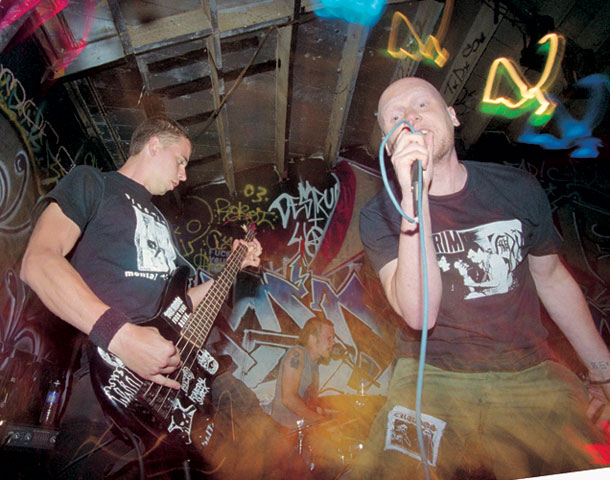 Deadfall is usually having a pretty good time. You know, the old “Let’s go sit in the park ’til 5 am drinking shitty beer until we can barely stumble home” kind of good time. That’s what I like about these piles; a party-’til-you-puke, rock-out-’til-you-pass-out attitude that makes you want to get spastic. No shoegazing, no cupcakes, no bullshit—just loud, fast, and out of control. Sorry if there’s no hidden meaning to it all. Deadfall has been a staple of the Bay Area hardcore and punk scene since they got together in 1998, and have earned a slot on Maximum Rock ’N’ Roll’s latest compilation. But don’t get confused, Deadfall is just as much a group of friends doing what they love most. In this age of pink polos and gelled faux-hawks, that’s actually pretty refreshing.

When and how did Deadfall meet?
Scotty Heath: Nic and I have known each other since high school; we were friends when we lived in Brighton, MI. I moved out here in ’98 from Michigan. We met Andrei when he was vacationing out here from New York, basically because he had a mohawk. That’s how we met him and shit. A dude with a mohawk, so we started hanging out with him. I met Mark on the bus because I was wearing a T-shirt from a show we were at a couple days before. Mark actually moved here from Peru, and Andrei’s from Belarus.
Andrei Bouzikov: I lived in New York City until ’98.

When did you move to New York?
Andrei Bouzikov: I moved to the United States in ’96 from Belarus. I was visiting San Francisco and thought it was the coolest city in the world. I decided to stay and go to art school. Then I met these cronies.
Mark Reategui: I moved here to go to school and I saw that there was punk here.

What’s the music scene like in Peru?
Mark Reategui: I was involved in the scene there; I played in a band called Asmereir. But I just thought it’d be cooler here ’cause there are bands that I like.
Scotty Heath: Dude, if you want to talk about Peru, this is your chance.
Mark Reategui: Ohhh yeah. Peru is like a really run-down version of SoCal. There are punks, but it’s way different. It’s kind of an isolated scene.
Scotty Heath: What’d he say? Peru is like a really poor SoCal?
Mark Reategui: Well, what I was exposed to in Lima seemed super surfered-out, with mostly Pennywise punks.

Do you think the Bay Area has a unique scene based on other places you’ve lived or traveled to?
Nic Lang: Definitely a lot of cool cities with great scenes.
Scotty Heath: There are a lot of great scenes out there, but there’s like a thousand kids out here that are actually involved enough to want to go to shows and want to learn about bands and care about the local bands, bands you can actually hang out with.
Andrei Bouzikov: The shows are more unique because you put a metal band with a punk band with a hardcore band and they’ll all play under the same roof. Rather than in lots of cities we visit where there’s a show, but it’ll be a hardcore show, and that’s it. Here people go to all different shows and everyone’s kind of friends. It’s a friendly atmosphere everywhere.
Mark Reategui: But there are mean guys at the shows, dudes with angry faces.
Scotty Heath: Yeah, they make angry faces when they fuck shit up in the pit. That’s what’s cool about the Bay Area: mean faces. In Pittsburgh they smile in the pit.

What creates a sustainable music scene?
Scotty Heath: First you need kids, then you need bands, and then you need a venue. And if the bands and the kids know how to organize and run a venue, then you have a scene right there. Any place that can get those three things, you have a scene that’s going to grow.
Nic Lang: The most important part is enthusiastic kids. We’ve had outdoor shows in the rain and people still come because they care about hardcore and punk that much in the Bay Area. Andrei Bouzikov: No assholes.
Nic Lang: Yeah, the ability to say no to  the assholes.
Scotty Heath: That’s why things are so good here, there are so many kids, there are so many bands, and there’s a handful of really strong venues run by people that know what they’re doing.
Nic Lang: That’s a really important part: people who are dedicated to keeping DIY spots open and all-ages shows for a cheap price.
Scotty Heath: If every town had someone as dedicated as John the Baker, who runs Burnt Ramen, or the 20 volunteers who keep Gilman open every weekend, then every place could rage.
What are your interests outside of playing music?
Andrei Bouzikov: Uhhh…we’re very smart and educated people.
Nic Lang: I like to drink beer and ride my bike around San Francisco.
Scotty Heath: Mostly everything I do revolves around music. I play in another band (Voetsek), I silk screen T-shirts and posters for other bands, and book shows. I also run Tankcrimes Records, so that pretty much takes up most of my time. And we like to party a lot so in between playing music we like to drink and listen to music. My favorite thing to do on the weekends, if I’m not playing, is to go see other bands play.
Andrei Bouzikov: I like to draw pictures, pet my cat, and grow my mustache.
Mark Reategui: I do graphic design for some metal and punk labels. I like going skateboarding and surfing. When I go to Peru I get to surf.

Do you think you guys are going to be able to actually make it into Canada?
Nic Lang: Not with all the weed that Scotty’s going to be carrying.
Scotty Heath: Oh, man, we went to Canada before, we didn’t play a show, we just went to Niagara Falls, and I had some weed in my pocket. We just walked out on the bridge—didn’t even cross the whole thing, we just walked to the side that said Canada. We didn’t go through Canadian customs on that side or anything. But when we walked back we had to go to US customs. You can’t tell from reading the interview, but Mark has a Peruvian accent and Andrei has a Russian accent.
Andrei Bouzikov: And no documents at all.
Scotty Heath: And Mark only had an expired Texas driver’s license.
Nic Lang: And he’s a member of the Taliban.
Scotty Heath: So I got the weed in my pocket, and the custom’s agent is like, “Give me your ID. What are you doing here? Empty your pockets.” So I start fumbling through my pockets, trying to grab everything except the weed. And he gets pissed, like, “Quit fucking around and throw everything on the table!” So I just went for it. I grabbed everything hoping I didn’t grab the weed and my little pipe too and threw it all out on the table. The agent was like, “What the fuck is this shit?” We were on tour so I had all kinds of flyer and stickers and all the 50,000 pieces of bullshit you pick up on tour, postcards and stuff. I just filled his whole table with shit just emptying my pockets and the agent says, “Get this shit out of here! Get out of here!” So I just scooped it up into my  T-shirt and left. That was scary as shit.
Andrei Bouzikov: I remember sitting on the bench while they checked my ID on computer. I thought I was going to get deported.
Scotty Heath: Thankfully my felony  narcotics and handgun charges didn’t come up.

Check out Deadfall's myspace to listen to some of their songs.
© 1981–2020 High Speed Productions, Inc.