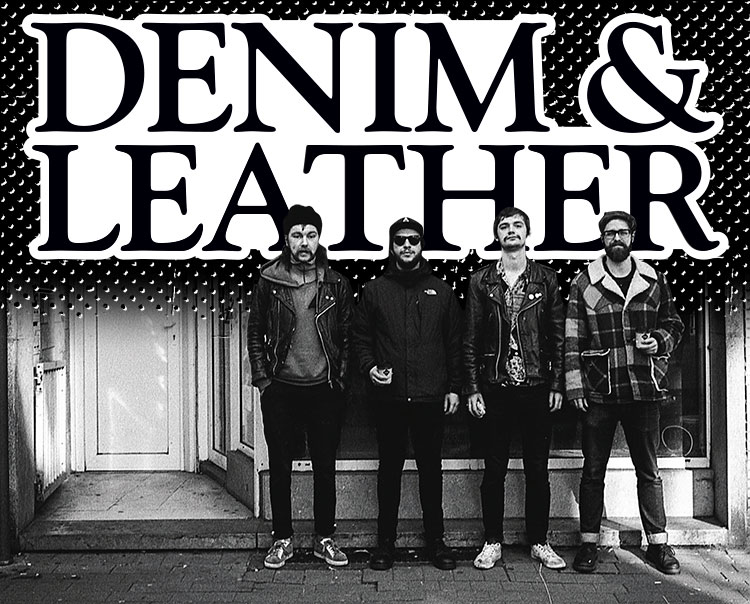 I randomly crossed paths with Denim & Leather in Paris while I was on the hunt for a punk show to escape the gypsies hustling selfie sticks. Whether it be dumb luck or fate, I stumbled across a flyer that caught my eye. It was for the Paris stop of their tour with TV Crime that night. I went down into the brick-dungeon-like venue where I was blown away by these English gents. After the show I talked to the dudes about their ties to Saxon, skating and the Queen. –Jordan Joseffer

So, what’s up? You guys are named after a Saxon song?
Yeah, yeah. We’re named after the Saxon song. Basically our guitarist used to work for a massive ticket company called Ticketline and he said when he used to work the box office there was one lone guy who bought a ticket to every metal show on his own and he would come with a massive battle jacket on with every band on it. He was going to those gigs alone and the Saxon song has a very similar sentiment that makes people value those kind of things. So we wanted to make music for that one lone rocker.

Seeing how you guys play punk, it seems like an average Saxon fan would be bummed on you guys.
We’ve been getting booked for, like, glam metal gigs and we played them all. Most people are kind of confused but a big percentage of people are, like, “That’s pretty fucking good.” It’s more about bringing the energy to that kind of thing without it being the homogenized crappy rock ‘n’ roll that it is.

Has anyone ever demanded for you to cover “Denim and Leather”?
Never! Not yet. I wish someone would embarrass us like that. I don’t even know half of the lyrics.

I noticed you have an unfinished Thrasher logo tattoo that just says “Thrash.” What happened? Did it hurt too bad or are you really into thrash?
I don’t feel pain. Nah, I got this a  long time ago. I’ve been a skater forever. This is our lives, you know. We are children ’til we die. Our boards are on tour. We’ve been ripping it up at every stop as much as we can. We’ve been skating since we were about 13. We never got any better but we just continued doing it through it being popular and unpopular and now it’s popular again. We’re a lot worse than people who are our age that just started.

Well, it doesn’t matter if it’s popular; it just matters if you’re having fun doing it.
Yes, of course.

I gotta ask you about your other tattoo. It’s PMA but it’s crossed out.
Ha! It wasn’t meant to be crossed out. I also have another tattoo here that says, “Kill Yourself” so it kind of made sense. As soon as I got the PMA tattoo and it was crossed out I was, like, “This is bullshit. I don’t want to cross this out. This is the code I live by and I love the Bad Brains.” And in accordance to it I thought, “You know what? Fuck it. Kill yourself.” I used to write graffiti back in Manchester and that was our crew name: “Kill yourself” or “Kiss Your Sister.”

Have you guys toured the USA?
Never, but we’ve played with some American bands: Poison Idea, Bl’ast! from Santa Cruz and others. 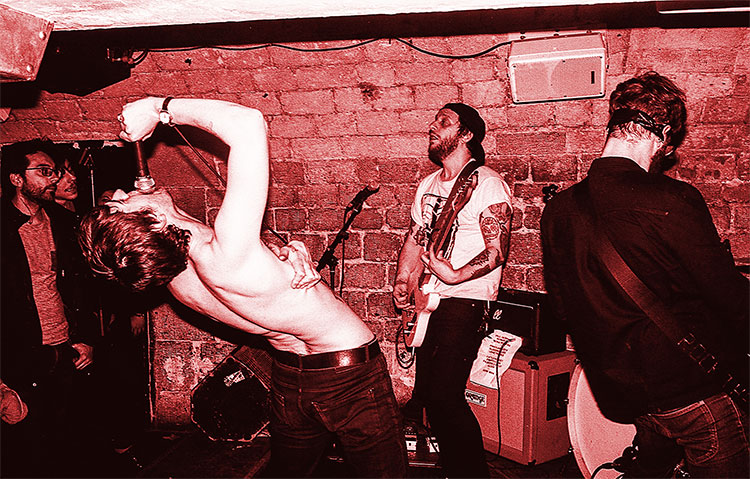 As an American I feel like we look stupid to the rest of the world. We just elected Donald Trump as President. Do you guys think we’re idiots?
That doesn’t reflect on the rest of the fucking people. The fact that man can get so many people to think, “Oh, he’s just like me,” when he’s a fucking billionaire from birth with 20 yachts, 100 billion dollars, prostitutes on tap—It doesn’t reflect on everyone, though.

How do you guys feel about the Queen?
Kill it. The thing is we persecute people who take advantage of the benefit system, like help for families and help with homes and stuff like that, but she has this massive house and loads of other houses and gets loads and loads of money. She’s the biggest benefit fraud in the UK.

Could you credit the Queen’s reign to punk? Dating back to the Sex Pistols.
Everything is affected by everything. Malcom McLaren knew if he engineered all those situations he’d be able to get a decent response off the media, but what he was doing was following what other people had done in the past with the Beatles and stuff like that. I don’t attribute any of that kind of thing to the Sex Pistols. They were just kind of like following the trend. Kind of like how a shop like American Apparel will sell Circle Jerks shirts and stuff like that. They are reappropriating something that was ghetto and working class culture and making it something that’s sellable.

Anything else you want to say to the skaters around the world?
Skeet skeet. Keep YOLOing only once. Make America vape again. It’s only 4:20 twice a day and Denim n Leather are going to fuck you up.