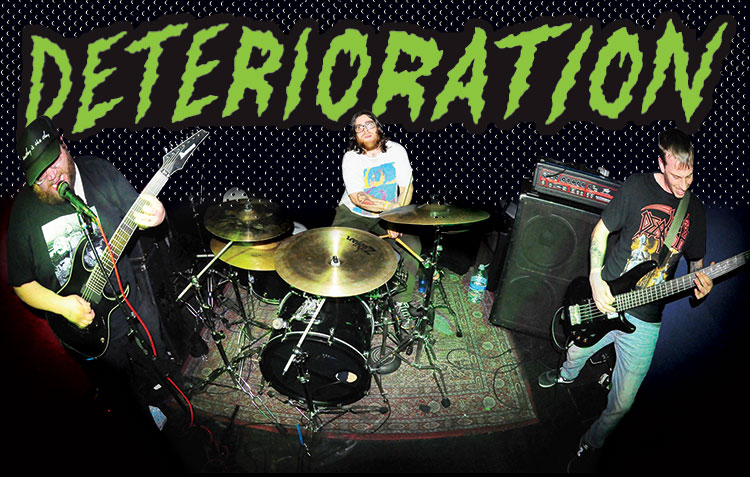 You may or may not have ever heard of Deterioration, but if you see ’em live you’ll never forget ’em—they absolutely pulverize an audience. It’s a relentless display of grind absent of all slow parts and breakdowns. Blast beatings so pure, all tom drums were thrown to the wayside as to not get in the way. It’s as if Insect Warfare and Anal Cunt procreated, delivering a hideous child, and Nalpam Death was the wet nurse. Now in its prime, this child has been inflicting its own brand of chaos and discord on earholes for 15 years. Creator siblings Jim and Joe Kahmann picked up the phone to chat on the subjects of fanny packs, sweatpants and samples. — Sam Hitz

Jim, what’s up? Where you guys at?
Jim: We’re at work right now.

You and Joe both?
Jim: Yeah, we both work together. We sell outdoor theater equipment like projectors and movie screens.

Shit, I thought you guys would be chuggin’ beers at the studio.
Jim: We’re kind of getting all our merch ready for our tour coming up.

What’s that one?
Jim: It’s our 15-year anniversary tour. It starts on the 20th of April.

I saw that flyer. Where are you going and who are you touring with?
With Hallucination Realized from New York. We’re starting here, heading to Iowa City, Wichita, Dallas, Houston, New Orleans, Raleigh, Philly, New York then Ohio.

I can hear all of that shit. I know you guys are heavily into Insect Warfare. You ever see ’em play?
Jim: No, never saw them live, actually. I’ve seen P.L.F. a bunch of times, the original Insect Warfare drummer’s band.

What’s up, Joe? Did you discard all of your tom drums straight out of the gate for Deterioration or was it gradual?
Joe: It was gradual. I had two, then down to one, then I realized I only used the one in, like, two or three songs, so I was, like, “Fuck it. Let’s get rid of it.”

That’s fuckin’ great. Is it true you released your latest EP, Lupara Bianca, on 8-track?
Joe: Yes, that is true.

Where do you go from there? Next release on the Edison phonograph cylinder maybe?
Joe: Ha! We’ll have to figure something out.

Release it on braille so the deaf can hear it!
Joe: Or do a wire recording?

Lupara Bianca is all about mafia hits and the disposal of the body. Will a full length follow covering the same topic?
Joe: Most likely a similar topic. We got a few splits we gotta work out before we start working on a full length.

I love all the wrestling samples from the past. What other topics might you explore in the future?
Jim: Probably whatever we’re into at the time. We kind of just go with the flow. Once an idea comes we just hammer it down until we’re done with it. It will honestly be like we’ll all joke about something for a day and it becomes the next record. And having no lyrics helps. We kind of just make song titles. It doesn’t really have to get too in depth.

Right. It’s the power and noise that translates what you’re into at the moment. Do you consider yourself a movie buff? Are grindcore enthusiasts generally movie buffs with the amount of samples used for songs?
Jim: Yeah, I think everyone is kind of into that ’cause you got to find material. The more obscure the better when it comes to that. With us, we’ll try and pull five or six different samples from the same source and have some continuity.

It’s like a skater constantly looking for spots—always listening. Hear a news story and scramble for your phone. I imagine your phone is filled with the shit?
Jim: Yeah, definitely. All three of us have notes on our phones—all different ridiculous song titles, sample ideas and all that we keep track of.

Alright. I’ll quote a sample from a Deterioration record and you name the song title and source of origin.
Jim: Oh, this will probably be impossible! I’ll try, though.

“I remember the blood smelled like pennies.”
Jim: Thats from a Steven King show on Netflix, 11.22.63. I don’t remember what release we put that on.

Alright, good. Next one: “It was nothing like that, penis breath!”
Jim: That was From E.T. and that was on the Hyper Reality EP. I think the song was called “Disclosing Tablets.”

Here’s another one: “Hit puree!” ”No, No, not my hand! I want to play the violin!”
Jim: That’s from The Goonies. I believe the song was “Crowbars for Arms.”

You backed up the release of your EP with the Your Head is a Meatball Tour. The show in SD was a beast. How was the rest?
Jim: The rest of it was pretty good. We were only working with nine or ten days so it was gettin’ out to the West Coast and gettin’ back in that amount of time. A lot of our drives were ten-to-12-hour drives. That part was kind of tasking, but the shows overall were really good. We played LA Speed Fest the day after San Diego and that was really, really good. We did a versus set with Sulfuric Cautery from Dayton, Ohio. It was pretty brutal.

What other bands did you play with that stick out in your mind?
Jim: Sulfuric Cautery is great. So is Girth. Those were the two that were really awesome. Domino from Minneapolis played that Speed Fest as well. They’re good friends of ours and always awesome to see.

I notice you guys had fanny packs on your merch table. I regret not buying one.
Jim: Yep. I got an extra one! I can mail it to you if you want. 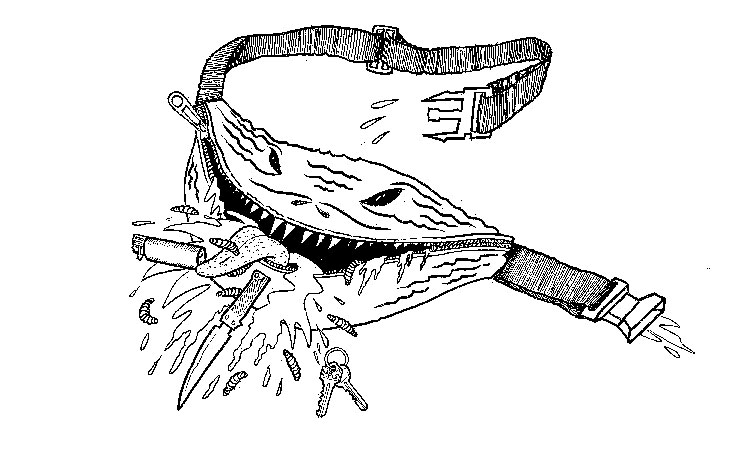 What kind of grindcore items do you keep in a fanny pack?
Jim: I don’t wear one of them so I don’t know. But our bassist keeps a knife in his, so that’s probably it.

I wore the same sweatpants for six days in a row once. That’s my record. Who has more sweatpants in their wardrobe, Deterioration or Putrid Pile?
Jim: I think he’s got a lot of basketball shorts. I’d say if it’s our whole band versus him, we would have more sweatpants. I don’t know, though. We’ll have to make a video of this someday. Bring us all to a mall and see who comes out with the most sweatpants.

What’s the most exotic musical instrument you’ve ever used on a track?
Jim: We had a saxophone on the Suck Brick album.

That song rules. It worked. It almost sounded like a guitar solo. It reminds me of another band from Minneapolis, The Cows.
Jim: It was just our friend who plays the saxophone and we wanted to put it in there. We were just talking today about on our next release we were gonna have him do another track.

What’s the main difference between Deterioration and when you morph into the band Hummis?
Jim: The difference is it’s just kind of a joke band ribbing some friends of ours who have a band called Haggis. Hummis is our parody band.

It’s a sick bonus set, though. Does Joe change up his set for Hummis?
Jim: Normally for the Hummis stuff he has toms, like a floor tom and a rack tom.

I thought so. When I got my drum kit back from the SD show it looked like it was sittin’ under a wood chipper all day!
Jim: Yeah, it’s like that at our practice space. It’s everywhere. It’s like a ring around his entire kit, just sawdust.

I was hyped my bass head made it through the gig! We’ve been calling Joe “the wood chipper” ever since.
Jim: Oh, cool. That can be his new name. I’m fine with that.

Thanks for taking some time outta work. Let’s do this again. Maybe here, maybe anywhere?
Jim: Yeah, I think we’re gonna be out in San Fransisco on October 20th, so we’ll do a couple shows around there.