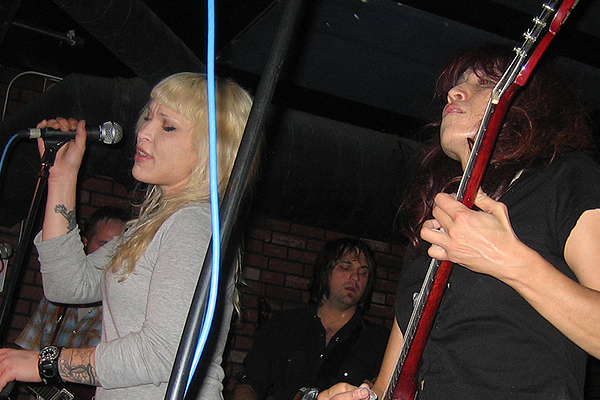 The Detroit Cobras are a rock band formed in 1994 from the the motor city of Michigan (Detroit-duh!) They cover standards from the vaults of Motown, soul music and 1950s and 1960s rock & roll. After playing some phone tag and then getting cut off by a storm, I finally got to chat with front vocalist, Rachel Nagy.

How did you get it all started?
Mary and two other friends of ours had started up the band and weren’t really having much success getting a singer. They tried a few people and nothing really had worked out. I was friends with all of em and was always around and watched each one of there proposed singers come in and out. They were like, hey why don’t you sing. I knew all the songs and all the music, we were into all the same shit, but I wasn't a singer. The thought had never occurred to me, there was no reason that I'd want to do that. I'd never wanted to be a singer. Eventually, they got me drunk enough and kept going from there. It was fun, we''re all into the same stuff, so it worked out.   Later on down the line we had some inter personal problems and we all kind of broke up. Mary and I were like wait a minute, why should we stop this. Were the ones picking the music, we're probably the strongest stuff in the band and so we kept going. We picked and chose what we wanted and whom we wanted and it’s just gone from there. We’ve done really well with it and we like what we do.

The whole time it's been cover songs?
Yup, that's what we do. Its not like were trying to grow up one day and write a record of our own songs. We don’t want to do that, this is what we like doing. This is what the Cobras do, it's what it is.

What goes into the process of getting material for records?
It’s definitely, when its time we always have songs building up anyways. We always have like a stock pile of stuff. Also, once we start snooping around, we ask our friends and start shopping again and looking for stuff. It’s a combination of everything. The more  we’ve traveled the more people we’ve met, its like the world is our working collection at this point. It's  pretty great. All we have to do is call up some of our  friends wherever, we got DJs in Europe everywhere. They send us stuff and we kept our eyes open and we just get a pile of stuff together and try out the  songs together and it's pretty easy to see what works  right off the bat. Either they click or they don’t, so  we kind of sift through it that way. Usually a  grouping of songs, we try to look at it as a record  and not just a bunch of cool songs that one could be a  single. We don’t go towards things that maybe a lot of  bands would that would help get radio play or  whatever. We really want it to be a body of material  that you can either go fuck your boyfriend or clean  the house or whatever and not worry about skipping  through songs. So, the songs that are there, the group  have to work together and kind of make sense.

So when you put together a new album, in the end is  there kind of a theme that they all coincide with?
I don’t know if there’s a theme. More so, a general feel. The first record was really raw, in the garage thing.  The second one had some rockers but it was a little  smoother; the third one, like the EP was almost like a  Gospel feel to it a lot. This one is a little more  grown-up, maybe a little more traditional soul. I  think it's just an over all feel more then an actual  theme. Like this one is gonna be about kittens, it's  more like a feel.

Do you guys like to tour and be on the road?
See, well we just got off the road and it was great. I’m ready to  go back out. We’ve got Greg Hartright in the band now,  we’ve made some line up shifts and changes and this was  so much fun. We really enjoyed ourselves. I could  definitely keep doing it with this particular line-up. There were times in the past where we had to go to  Europe without Kenny our drummer and we had to bring in a pinch hitter and it was a miserable experience.   Mary and I actually had a tour manager and a bus and  everything which is unusual for us and the tour manager had all our passports, and we would be plotting in the middle of the night to try and figure  out how to get our passports and get to the airport  and sneak back home. We just weren't having a good time. We were having fun, but the actual reason we  were there, we weren’t playing well and we didn’t have  our right people, it was really difficult. When it's  right it's a joy, and then when it's not it's hell and  you wonder what the fuck you're doing?

Are there bands that stick out that you've enjoyed  being on the road with?
Umm, again, this tour with Raining Sound, which is Greg’s other band. It was great, cause our bands make sense together. It really set up the crowd. We enjoyed listening to it and watching them. Other times, we’ve toured with other people that it didn’t really make sense being with. I can't say that we’ve enjoyed that, if anything it was  kind of confusing and just like okay, we're doing this just to do it. A lot of times we'll play and the promoter will just throw on some local band and again it doesn’t make any sense. It will be like some teenage metal band and we're just like, OK... In London we had these two English DJs open for us for about five or six dates. They were like old soul and RB DJs and rockabilly and all that stuff. That was great, cause before we played we'd be out there dancing. That really got the crowd going and got everyone in the right mind set and everyone was already geared up and having a good time. So it was like you started off with a dance party and just continued it on. We've done that in Detroit too, it's one of our favorite things to do. You feel like you're at a house party, it's a real natural feel. We get to go out and dance and then  continue dancing after we play. It's just one endless  party, and you can never go wrong with that.

We're you originally from Detroit?
Yeah, absolutely. Most of us are pretty much born and bread. I was born and bread in Detroit and spent a few years in Australia. Mary was actually an army brat. She  traveled quite a bunch as a kid, I think she was actually born in Panama. When she wanted to strike out as a young girl she bought a ticket to move out to Detroit and live with her surrogate grandma. So that’s how she became a Detroiter and now she could have an honorary birth certificate from Detroit. She's definitely from here now. Greg's a southern boy.

Is there a good tight connection with other bands in  Detroit, do you have a good scene?
Detroit’s a big city with not a lot of people. Well I guess we call it the garage scene, but it's grown into this, the main  underground scene. There's definitely off shoots but  there’s always been the harder rock and now there’s the  younger kids that go to all the dance clubs that I  guess dress at Hot Topics or whatever-dress up punks  and dress up goths... It's not so much what all the  musicians that hang out in our main scene I guess you'd call it. It's really close knit, everyone knows everyone. A lot of people have been in other people's band, its very incestuous. Everyone’s always willing to fill in for somebody or lend there bass player or whatever. Everyone knows everybody and hangs out together.

Ever have any creepy stalker situations?
I don’t know about creepy, I don’t know how to answer that one. We definitely get our own set of groupies both male and female, but I think Mary and I are scary enough that no ones gonna try and pull any shit. I think people  have seen us in action enough, we've been in enough  public brawls that I don’t think any creepy creeps could take advantage or do anything like that.

Do you and Mary hang out outside the band, what’s an average day like off tour?
Funny cause when we get home from tour, the next thing you know Mary and I are on the phone for like three hours. As soon as we get home we got a nice steak dinner and everything. We get together and listen to records or go out and get drunk or whatever...

Do you have any pre-stage rituals, do you have to get drunk or smoke weed before you play live?
Amazingly, no. A long time ago it was kind of like that where we were kind of a mess where wed drink our brains out. But now, it amazes me how many times we get on stage and I’m like whoa, I’m sober. Nothing needs to be done, it depends on the situation. Sometimes we may be hanging out having drinks or others we're catching up on rest or whatever... we're pretty versatile. There’s a good happy point where we’ve had just a few drinks not too many but just a couple-that's the sweet spot. Nothing we have to go for, but you can tell when people are in the party mood. You have to be real careful cause too many drinks can make it a mess.

Live or studio?
Both. It depends on the song, the night. There’s times that I’m like were a real great live band and other nights where Id rather go back and do that in a controlled environment but Id say live is  the more fun.

Whiskey or Scotch?
Neither, I become very violent on  whiskey and scotch.

If heaven exists what would you like God to say to you when you arrive at the gates?
Scratch behind my ears, pat my belly, say good girl and now go to sleep.
© 1981–2022 High Speed Productions, Inc.