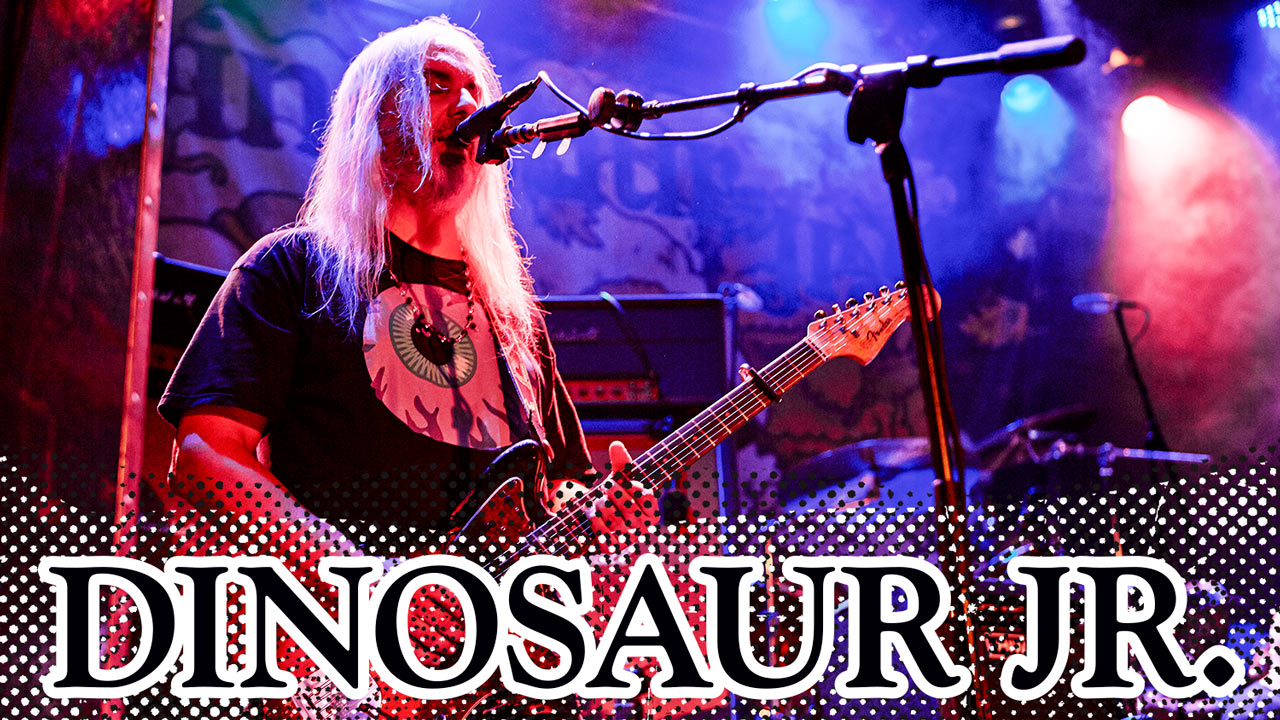 2015 marked 30 years of Dinosaur Jr., with all three original members back together for longer than their original incarnation (J Mascis kicked Lou Barlow out in ‘89, Murph quit in ‘93 and the band reunited in ‘05). To commemorate this anniversary, DC shoes sponsored an eight-night run of sold-out shows with a bevy of special guests—Frank Black, Kim Gordon, Bob Mould, and Kurt Vile to name a few—at the Bowery Ballroom in New York City. Each night before playing their debut LP in its entirety, a spotlight went into the crowd, where an enthusiastic Henry Rollins, perched on the edge of the balcony, delivered an epic introduction. Summing up the punk rock/skateboarder experience quite well, he reflected on his younger days of concert-going: “Everyone at these gigs were nervous and weird just like me… these were my friends for life, this was my music, and the more I went to shows, the better it was going to get,” and ending with the charge, “I hope that every time you see someone walk by you with a band t-shirt on, and you like that band, you go, ‘Hey! Alright.’ ” Interview by Dan Whiteley | Photo by Treboux

I actually interviewed you at the Fillmore, on the reunion tour. You’re still together ten years later. How?
Lou: There’s no good reason not to.
Murph: I’d go with that.

Anything memorable from the past decade?

J: Since I mostly remember the past few days, having Henry Rollins sing was really awesome. Charles Bradley and Bob Mould, that was cool.

Nice. What about you?
M: Definitely for me, the Henry thing because he was literally, like, right on my bass drum. When he got on stage, he was doing that eye thing to me as if I was in the crowd. And I was like, “We’re feeling each other!” I thought if something goes wrong, he’s going to kick in my bass drum or something.

I read this thing about how you moved to New York in the ’80s and went to Hunter College. What were you studying?
J: I wasn’t really studying anything in particular. It was an excuse for my dad to pay for me to exist. I was just in the music scene.

Is that where you met Sonic Youth?
J: No, I met them earlier, like, in ’85 or something and I went to Hunter in ’88. I remember listening to “Freak Scene” in my room and thinking it was pretty good. I remember recording it and listening to it when I was living in New York.

Was that song inspired by your time here?
J: I don’t think so. There was a lot of cool music around at the time. Rob Zombie was here the other day with Fred Armisen. I remember when they came to town and it was around the time I was living here. Someone asked me to take White Zombie out on the town. I took them to a Redd Kross show or something.

Amazing. So, let’s talk about the first album. Looking back and playing those songs again, do any memories come back?
M: All I know is I remember thinking I wasn’t playing it fast enough back then. Because these guys were in Deep Wound, which was so fast. Now when I listen to the record the songs sound
really fast.
J: I was amazed at how many parts there are in all the songs. They’re sort of difficult to play and I don’t know how I did it back then. I had just started playing guitar. They’re still hard, so it’s interesting to think about how that happened.

So did you have to relearn it all?
L: There were two songs we had to learn again.

Which ones were those?
L: “Pointless” and “Cats in a Bowl”.

Ten years ago, I learned that Lou hates “Cats in a Bowl.” You scratched it off your test pressing. Is that true?
L: I did because of the way I sang. I was 18 years old. That session was my first time in a studio. We had done the Deep Wound record in a studio, but it was the first time I ever sang. I never thought I was going to sing, then J said, “Here, sing these songs.” I was like, “Um, okay.” I didn’t think I could sing. I didn’t understand that I could sing. I was learning to play bass and J was learning to play guitar. I could play guitar, but I wasn’t very good. So I had to learn how to play bass and sing at the same time. But I’m glad I did it. And those songs are beautiful songs. I was doing it in front of these two guys. I knew them but they were older than me so I felt really self-conscious. That performance was particularly painful. But now when I listen to them, I think, “Who gives a shit?” But J’s vocals are fucking great on that record. He does sort of an Elvis thing on some of the songs. I think his vocal performances were really confident and kind of amazing. I was just yelping like this little emo kid. It just wasn’t quite as cool as J. So when I got the test pressing, I was so mortified that I took a pen and jammed it into the grooves and just destroyed it. I just found it the other day.

That’s a very emo thing to do.
L: It was an expression of self-hatred, but the song was fucking great. I love all those songs.

Was that your home address and you put it on the album?
L: That’s what you did back then.

My friends and I thought about driving up there from Cincinnati, dressed like pizza-delivery guys and knocking on the door. Did you ever get anything like that?
M: I actually had a guy do that. I was living in an apartment in town. He knocked on my back door one Sunday morning. He had driven up from Chapel Hill. He said, “Yeah, I heard you live here and I just want to check out the town of Dinosaur Jr.” It was really odd.
L: Some people came by my parents’ house because I put my address on some Sebadoh records. They told me about it and said they were really nice. They fed them and said it
was great.
J: My dad liked talking to people. Courtney Love used to call my dad. She wanted to open for Dino. They had some rapport. It was weird.

Did your dad talk you into it?
J: He did. She put a sticker of my dad on her guitar.

Let’s talk about some of your special guests for the week, starting with Henry Rollins.
L: I didn’t know he was a Dinosaur Jr. fan until the reunion process was underway.
J: We met him in Amherst with Sonic Youth and Firehose.
M: He was dressed in black and was super intimidating. I remember thinking, “Whoa, that’s Henry Rollins.”
L: When we did the reunion, he had a TV show. We did that. He’s a huge music fan. He collects all kinds of stuff and is sort of a historian, but he seems to have a special spot for J and Dinosaur Jr. It’s interesting because he can really expound on his love of Dinosaur Jr. It was shocking.

What about the Sonic Youth guys? Any first impressions?
J: They’re really nice. Our first area show with them was at Maxwell’s. They were nice to us, which we didn’t get a lot of back then.
L: They were kind of like parents or big siblings.
M: They took us on our first tour where we played in front of a real audience. When we got to support them, that was a really big deal for us.
L: They were into making real, meaningful connections with musicians. I heard Daniel Johnston for the first time with them. They played a cassette of his. They were about the music and connecting on a creative level. They were positive in what was a testy time. The vibe of most of the music was dark and they were this strange light. It was Sonic Youth, Swans, Big Black—heavy shit—Pussy Galore. We didn’t even think we fit into that kind of stuff. J was writing pop songs, basically. But they embraced us for whatever reason. Our approach was extreme enough that it made sense to people.
M: We had a punk ethic.

Jeff Tweedy?
L: We met him years ago.
J: We were on the same label and had the same A&R man. I remember I played Lounge Ax,  his wife’s club, and he opened for me and picked me up from the airport.

What about Bob Mould?
M: So amazing. He’s so powerful. My impression was that he’s really still got it.
L: He’s better than he’s probably ever been. The first time I saw Hüsker Dü was in this hall and they were the most miserable collection of people I’d seen. They looked so tired. Their show was great and I loved it. They were one of the noisiest bands I had seen. But Bob gets more friendly and bursting with life as time goes by.
J: I remember touring with them and they didn’t talk to me at all.

Who else?
J: Kevin Shields is coming.

How did you meet him originally?
J: He came to a show in London. Someone told me about their record. They said they liked us and we should get their record.

Anyone else on the wish list?
L: The Melvins. I wanted Ryan Adams to come. We contacted him through Twitter, but I don’t know if that’s going to happen.

So are you guys doing a tour?
L: No, we’re working on a record right now. Last week we were recording at J’s house. So we’ll go home and go back to finishing the record.

Are you all living in the same area?
L: I just moved back to Massachusetts last year after living in LA for 17 years. I live 25 minutes from J now. Dinosaur has become such an enduring project and the vibe is good between us.