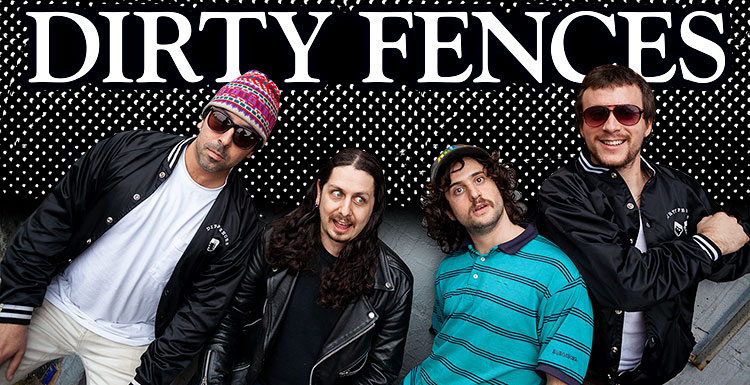 Dirty Fences are one of my favorite current bands, which is why I footed the bill to fly out to San Diego to do this interview. Their shows are a blast—they are tight, but also play fast and loose and trade off on vocals. They’ve progressed since their 2012 EP on Volcom, and their latest record (2017’s Goodbye Love on Greenway Records) is unadultered rock ‘n’ roll, with tinges of punk, power pop and ‘60s rock (and a killer duet with the singer of Sheer Mag). They’re a touring machine, and if all was right in the world this is what would get played on the radio and they’d be headlining arenas. They’re also funny and sarcastic as shit, so keep that in mind when reading. Ladies and germbags, Dirty Fences! —Wez Lundry

Does Fritz still live with his girlfriend under the bowl at your house?
Max Hiersteiner: Yes, Fritz still lives there—with his wife! Maybe I shouldn’t put this in the interview. His shack in the backyard is magnificent.
Jack Daves: The shack in the back!
Max Comaskey: It gets bigger every day.
Max H: The bowl is incredible, tons of amazing terrain to skate. It’s loud; it’s beautiful.
Max Roseglass: It’s got oceans! It’s got desert! It’s got snowy mountaintops!
Max H: It’s got Saint Bernards following and helping you in case you fall in the bottom and can’t get up!
Max R: It’s got a gondola that goes to the top!
Max H: There’s not ski rental, though, you have to bring your own skis! It’s double black diamond!
Max C: Fritz’s actually gets bigger every time we come back. It’s got full electricity now, air conditioning, heat, French doors, sun doors.
Max H: And the bowl has a bunch of extensions on it now.
Max R: It’s like a Dr. Seuss jacuzzi.

Jack, ever thought about getting another Jack to balance out the Maxes?
Jack: Uh, yes.
Max R: But because we’re consensus-based it will never fly.

I just tell people, “call ’em Max and you’ll be right 75 percent of the time.”
Max H: Except none of us respond to Max anymore. We all go by Jack now.

What happened when you got your shit stolen in Europe?
Max R: Our shit got stolen and it sucked.
Max H: We lost all of our gear, but fortunately our driver was well connected in his home country of Italy, so he made some calls with people who are “better than the police” as he put it, and we got gear that we were all able to play.
Max C: The next day we were taking the boat to Sardinia, which is a beautiful Island off the coast of Italy, like the Puerto Rico of Italy, and if there is one place you are gonna have to fucking deal with getting robbed, Sardinia was a great place to go afterward. We showed up and it was beautiful and sunny and nice and I had to wear the same clothes for about a week ’cause I got all my clothes stolen, and then we proceeded to do the tour every night playing different gear. So we got to try out a lot of gear before we bought new gear. We figured out what shit we wanted by the time we got back. I don’t want to get a Rickenbacker.
Max H: Some of the gear actually sounded really good.

It seemed liked a positive end to the whole thing; it became a positive rock ‘n’ roll story.
Max C: We also had an amazing thing where our booking agent put together a GoFundMe thing, and the whole world turned out to save us. And we are forever thankful for all of the people who helped us.
Max H: And I ate horse in Sardinia!
Jack: He ate a whole horse.
Max R: We had horse tartar. Horse carpaccio.
All: It was good!

How’d the duet with Christina Halladay of Sheer Mag come about?
Max C: Originally, I was writing a song. We were going to have a soul project called Charger with Tina, and our first record was going to be called Hey can I borrow your–Charger!
Max H: What’d you do?!
Max C: I just threw your joke in there! I told them about Charger! Anyway, I was writing this song; she was going to sing; I was writing a song for that and I originally wanted her to sing the whole thing, and then I said, “Fuck it, we’ll do it as a Dirty Fences song,” and then as I was writing the lyrics I thought this would be awesome as a duet. And so then we turned it into that kind of back-and-forth duet that ended up on the record.

That’s a great song! She belts it out!
Max H: Christina is a dear friend of ours.
Max C: She is awesome to work with and did an amazing job.
Max R: And the video is coming out soon! We got the final edit today!
Max C: We were just clowning around.

Best show you ever missed?
Jack: Woodstock, bro!
Max R: I never saw David Bowie.
Max C: In 6th grade I missed seeing Korn, and it sucked. I was so pissed!
Max H: The one that comes off the top of my head: Mungo Jerry played last year and I missed it.

No way! “Summertime!”
Max H: Jack came back and said it was the best show ever.
Max R: There were those shows where I got too high. And in 8th grade I was going to go see 311 with my friend Matt, and my dad went to go buy the tickets and the woman asked, “Are these for you?” And he said, “No, they’re for my kid and his friend. They’re in middle school.” And she said, “Well, you know there’s going to be pot smoking there.” And he was, like, “Well, they’re not going then!” and he wouldn’t get us the tickets. And we didn’t get to go. That was a real bummer. I was gonna go smoke weed!
Max C: For that Korn show, me and a friend were going to put on bagpipes and go to the show and stand outside and play them, because for sure we thought they would give us tickets.
Max R: Sixth grade idea!
Max H: There is no way they could have said no!
Jack: We saw the Real Kids last year. They played one song, got in a fight, left the stage and cursed out the sound guy, and we paid, like, $25 and that was it. Yeah.

Okay, best show you ever saw?
Max R: Best show I ever saw was Devo doing all hardcore Devo.
Max H: NRBQ, man! The New Rhythm and Blues Quartet! Best bar band in the world!
Jack: The Bowie show was incredible. Bowie in high school.
Max H: Rolling Stones at Fenway Park was also pretty sick.
Max R: I listened to that from a rooftop across the street at Fenway Park. Best show I ever saw? I saw the Philip Glass Orchestra perform a life score to this movie Koyaanisqatsi at the Orpheum Theater in Boston.

That’s kind of arty as fuck.
Max R: Yeah, but it was dope! I was stoned for that, for sure. It was sick!
Max H: I would throw in that any Spits show is a good one.

So, how long have you guys been vegan?
Max H: Nice. That’s good! For probably, like, five minutes?
Max C: As long as she was noticing?
Max R: Since we moved to Portland?
Jack: As long as it takes to get laid?

We didn’t talk about skateboarding at all. We don’t have to, but—
Max H: But we sure can! What do you want to talk about?
Max C: Talk about your night last night!
Max H: I stayed at Washington Street last night with Ry, Chris, and Lukas and we skated a pool this morning. It was fucking sick.
Max C: What does it mean to stay at Washington Street?
Max H: You sleep!
Mad C.: Where?
Max H: In the bowl!