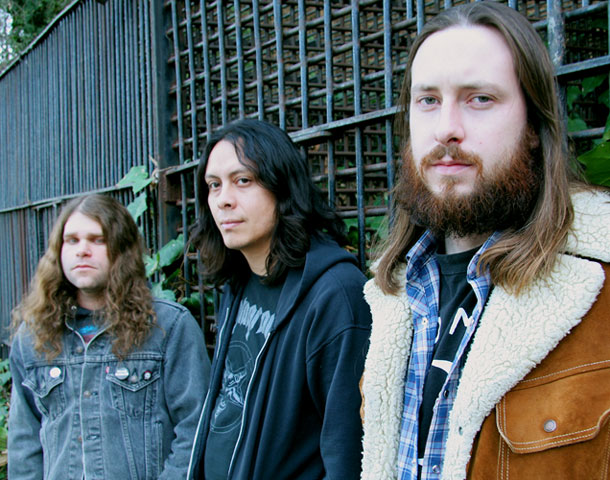 In the deepest parts of Southern California, the San Diego area to be exact, lays a psychedelic throne currently occupied by a trio called Earthless. The sound is directed towards a kraut-rock feel, adapting psychedelic guitar solos to a steady pulsing rhythm reminiscent of John Paul Jones and John Bonham. The guitar work is precise as well as creative. The rhythm section is great. A live show is the band’s strongest scenario. They are very heartfelt in their live delivery. Witness them live and you will be assaulted with high volume and heavy, serious riffs, as well as a stunning display from the band to do some great improvisation. The best thing about seeing Earthless play live is that it doesn’t stop. It just keeps going and going and going. No pauses, no bullshit, and no frills. Drummer Mario Rubalcaba’s also been around the world many times as the drummer for Rocket from the Crypt. We caught up with Mario a few days right after he and the rest of the band had returned from South by Southwest in Austin, Texas.

How long has Earthless existed?
For about five years now.

How did you meet the band members?
Through mutual friends. We all had many things in common. We all liked scrappy garage, Japanese psychedelic music. We were into doing a heavy kraut rock band. Mike, our bassist, knew the guitarist Isaiah from his old band, Lions of Judah.

The first time you guys jammed, what did you play?
“Iron Man” and “Rock ’n’ Roll” from Led Zeppelin. The second time it was all original riffs and material.

How long were you guys together before you played a live show?
We jammed five times, then played a show. It was about three months. It was at the Casbah in San Diego. We didn’t have much focus back then. We didn’t have a name. Mike came up with Earthless. At that time I was in Rocket from the Crypt, so we had a hard time getting together. Back then it was 80-percent improvisation when we showed up to rehearse or play a show.

What is your first release?
The Sonic Prayer LP on Gravity Records. Then we put out a live 10 inch called Sonic Prayer Jams also on Gravity. Then the Tee Pee release is out May 8, titled Rhythm from a Cosmic Sky.

Talk about your record store.
That was an idea that came about because Mike and I are big music buyers. Also, there  are no stores in San Diego that were keeping up on real underground stuff. So a childhood  friend of mind named Jeff wanted to do it  with Mike and I, and it worked out. It’s been  two years now, and we’re carrying more obscure oriented stuff.
When and where did you start skateboarding?
In 1983 out of Vista, CA.

How did you get sponsored by Alva?
I had two friends that rode for Alva, and we skated vert together. I went to a contest in  Las Vegas, and Dave Duncan was judging it. Then he approached me.

How long were you pro?
For five years.

How did you meet John from Rocket from the Crypt?
They were from my hometown. When I found  out that the original drummer was quitting, my friend Paul said to call John. I never followed up on it, and I saw the guitarist at a party in San Diego. He then had John send me demos. I auditioned, and it sparked.

What kind of drums do you play?
Ludwigs. Twenty-four-inch kicks, 14-inch rack, and a 16-inch floor tom. Ludwig snare as well.

If you had to use three words to describe Earthless, what words would it be?
Sonic, rock, power.

Download Earthless albums or songs from the iTunes store here or check out their myspace for upcoming shows.
© 1981–2020 High Speed Productions, Inc.