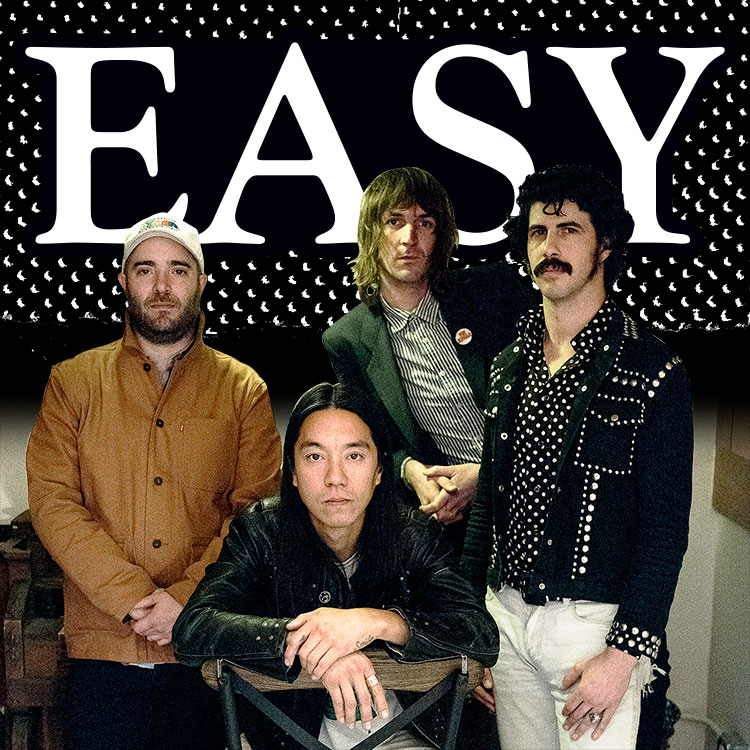 Some of the baddest dudes in LA got together to kick out the jams and as a result, Easy was formed. They are not just some skate-rock band using their names to sell out shows, these dudes know how to write and play. After a few weeks of jamming, they put together a killer set and are playing amazing shows. If Easy is in town, go watch them and go buy their LP that’s coming out soon! I had a few laughs with Josh Landau (The Shrine), Jordan Jones (the Birdwings) and Don “The Nuge” Nguyen (Baxter St. and Arctic) and we talked about the band and other good times. When you have these guys on stage of course it’s gonna be brilliant—and easy! Ladies and gents, welcome Easy. —Corey Duffel

How easy was it to come up with this band?
Josh Landau: I broke up with my girlfriend, cut my hair, moved back to Venice, wrote some new songs and booked a show. One night we were partying and I turned to all the dudes I hang with every night and said, “Hey, I got some different songs and a show at The Echo. Let’s play.”
Jordan Jones: Right barstool at the right time for me.

Has been it easy so far? You guys have been in bands for years and all have connections? Or is being in a band never easy?
Don Nguyen: Nothing is easy. But it is easier when you know some badass people that do badass shit. Like Noah recorded us and killed it. We had Chris Blauvelt and the Six Stair dudes make us a video. Like, right place at the right time type shit. We had Camille Rowe star in the video. That video should’ve cost $40K to make. But it didn’t. Also, Erik Bragg has been playing band manager and he can talk his way into anything.
JL: We put out one song and just got asked to go to Europe. How’s that? We’ve all been playing in bands for years. Something about this one is just different. Maybe ’cause we were all friends first just hanging out.
JJ: Bands get easier after years because you learn from the past, and once you have connections, the ceiling kinda goes away.

Jordan, have you gotten any letters on Nuge in a game of SKATE yet?
JJ: No way. I don’t even look at a skateboard when I’m with him.
D: Jordan rips! I didn’t know he even skated until I saw him do 15 flatground tricks in my face.

Does every one in the band skate?
JJ: Josh is a super ripper in a pool and loves tré flips; Nuge is hall of fame, of course; I still got flip tricks when no one is looking.

Would you check your board or instrument if only one could be brought on the plane.
D: Bring both on the plane and tell the airport to fuck off.
JJ: Instrument so I can pull an Adam Sandler in Wedding Singer moment if I have to. I know how to play that song, too.

What others bands are all skaters? Imagine a KOTR band edition. I would put my money on you guys.
D: Bad Shit, Petyr, our other band Arctic, Grindline the Band.
JJ: Dirty Fences, Ugly Kids. Does Slam Section skate?  Or did they just come up with the best band name ever?

Does the skateboarding connection help out? Are the shows filled with Nuge fans? Or are they here just for the music?
D: Mostly there for the music, honestly, but I’d say about 30 percent of the crowd are skaters.
JJ: I feel like most people just wanna see what Josh is gonna wear that night.

Is it good being a skate-rock band, or is bringing skateboarders into a music venue a good way not to get invited back?
D: Skaters love to rock and that’s what it’s about. Tear the place down. Everything goes.
JJ: It’s definitely created some of the best and rowdiest crowds I’ve played to yet. Getting uninvited is always a goal of mine.

Did Jordan turn you guys all onto Oasis? Easy does not sound like The Shrine. Or are you guys all fans of pop music? I love that Easy is rocking, but poppy.
JL: Thanks. We got some pretty melodies and harmonies but there’s a heavy punch behind the words. It’s just songs, not riffs, really. My buddy Kris Kirk told me you gotta watch this Oasis movie; the dudes are insane and I was hooked from there. Really stoked to find out Jordan is as much of a Bob Dylan nerd as me. “Give the anarchist a cigarette!”
JJ: Morning Glory came out when I was 11 and was on repeat in my mom’s car then my own for years. Josh found them recently and got swallowed in whole. I’m so proud of him.
D: It’s good old-fashioned rock ‘n’ roll. If you came to party then you came to the right place.

Nuge rules at pool, cooking, skating, bass, life and pretty much everything, but is he writing the songs? Who is the main songwriter of Easy?
JL: I wrote these “song” songs I couldn’t put in The Shrine. It would keep me awake at night fucking with me. I just had this gut feeling that I had to get them out or I’d go crazy. Stuff I was almost scared to play for people at first, but you just gotta go for it and not say too much, just carefully look for the right time to jump out the window. This first record is five songs from that, but now we’re working on new songs that Jordan and Nuge wrote and they’re epic.

Jordan, I gotta say I am jealous that you have a photo taken by Atiba published in Thrasher. I never thought I’d see the day. Maybe you can put in a good word for me?
JJ: Bucket-list shit, for sure, but once you get past the first level on his Shinobi machine, you’re made.

Food to eat?
D: Pho, duh.
JJ: Thai or whatever Nuge is doing when he’s near a stove.

Beverage to drink?
D: Water then beer then water then tequila in that order. Then sweet tea.
JJ: Margs, good water and any kind of dark, sludgy coffee. I know Josh likes to get supersonic.

Skaters to watch?
D: Rowan.
JL: My little brother Jason is my favorite to watch.
JJ: Duffman forever. Especially that new shit you showed me on Halloween this year.

Netflix to watch?
D: Jim & Andy.
JL: Freeway Rick Ross about the dude that sold all the crack in LA. Don’t Kill The Messenger about the dude that uncovered the story of the CIA being behind it.
JJ: Tom Petty: Runnin’ Down A Dream, The Farthest: Voyager in Space and all things Katt Williams.

How did you get sponsored by Fender? Do you send in a sponsor-me tape? I’m trying to get myself a Fender. Who’s the TM?
JL: We just called Domino’s and ordered a pizza to their office and since then it’s been all good.
D: I met Mike Schulz and he just started hooking me up with guitars and basses. Then Steve Zeitzoff from Vans started working there and then it was a no-brainer. They are the best.

That’s so epic! Fender, expect a pizza from me soon, and I’ll take a white P Bass in return. You’re a local LA skate fan. How crazy is it playing in a band with rulers and being on tour and meeting so many of the guys we grew up watching  in videos? Does that ever trip you out?
JJ: It’s pretty insane. All the people I meet through the skate connections are seriously some of the best people I now know. When an OG tells me, “Man, I love the way you play! And your bands rules. Let’s get a beer!” I’m in my head, like, “Huh? I was learning to tune this fuckin’ thing while watching you rip though my VCR. This is nuts. You’re buying!”