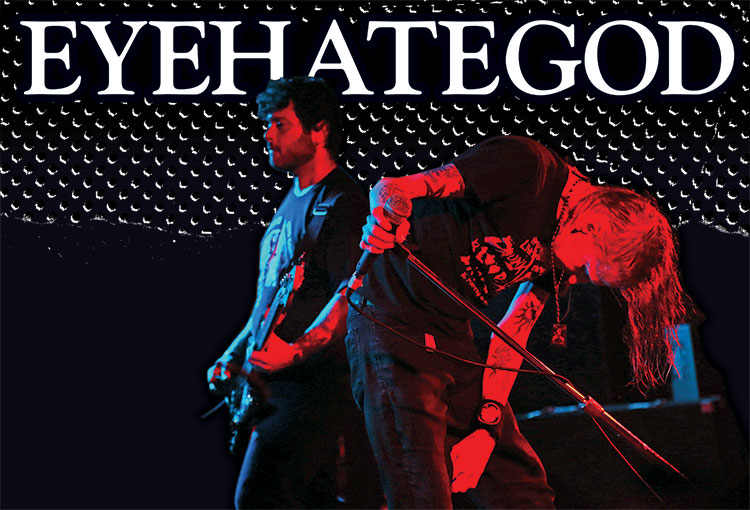 Mike IX Williams is a survivor. The embattled frontman is going on almost  30 years (and eight albums) with New Orleans’ finest sonic export of heavy, downtuned, bluesy, Sabbath-styled riffs coupled with syrupy, thick basslines, battering ram percussion and torturously downtrodden vocals that is Eyehategod. They are true musical pioneers in every sense of the word. Given a new lease on life late last year with a brand new liver, Thrasher caught up with Mike IX and the boys before a recent gig at Brick By Brick in San Diego. —Aaron Schmidt

So what’s with the IX in your name?
It’s the Roman numeral for the number nine. For one thing, it looks good on paper. It’s just this number that kept appearing in my life. And then, when I went to jail after Hurricane Katrina, people started writing “Free Mike IX” while I was in there. I thought it had a good ring to it, so I kept it.

You’ve recently had some health issues. How’s everything going?
Everything’s going great. I had cirrhosis of the liver, so I had a liver transplant back in mid-December of last year and I’ve recovered perfectly. I probably shouldn’t be doing six shows in a row, though. My doctors don’t even know I’m on tour. I’d think they’d rather me be at home, but I’m not gonna do that, you know? If I’m gonna die, I’d rather do it onstage.

Who came up with the name Eyehategod?
The original singer did in 1987,  believe it or not. This guy Chris Hilliard came up with it. He had this whole weird concept about the eye, like, what you see is God and you hate your vices and your vices are God. I honestly still don’t know what he meant. He kind of had a mental lapse and went nuts. After he came out of that, he became a born again Christian; basically, right after he’d thought of the name Eyehategod. The band was actually originally called The Eyehategod. Just like on the first Pink Floyd album, you’ll see it says The Pink Floyd.

How did the name Eyehategod go over when you guys first started playing shows? What was the initial reaction from people?
Back in the ‘80s, it was not good. When people don’t understand something, they want to beat it up. So we got threatened a lot and we couldn’t play shows and things like that. When we did our first tour, we started with this band Buzzov-en. They were actually coming up at the same time as us. They were listening to the same records as us: Southern rock, punk rock, and metal, like Celtic Frost or Carnivore. Stuff with slow parts like Corrosion of Conformity. Like, hardcore and metal, but with the slow groove parts. We’re all big fans of the blues.

So you, Jimmy Bower and Brian Patton are the only original members in the band, correct?
Yeah, Jimmy and I have been in the band from the beginning. Brian’s been with us since 1993. He’s at home right now because his wife is giving birth. Gary Mader has been our bass player since 2002 and Aaron Hill has been on drums since 2013.

How would you describe Eyehategod’s music to someone who’s never heard it before?
I’d call it hardcore blues if I could use two words. Or I’d call it hardcore punk Southern rock. In the beginning, a lot of people hated the name and hated the music because they didn’t understand it. The metalheads hated it because it was too punk, and the punks hated it because it was too metal. Nobody understood what we were doing and we loved that. It’s what we wanted, for people to get aggravated.

What’s your personal favorite EHG album?
Probably the last one we did, the Eyehategod self-titled album.

Who are some of your earliest musical influences?
Black Flag, C.O.C’s Animosity had a lot of slow parts and feedback, Dead Boys, Discharge,  The Germs, Iron Maiden, Black Sabbath, Exodus. I’m all over the place. I like SPK and Throbbing Gristle, noise stuff.

I read somewhere that you’re also a writer. Have you written any books?
Yeah, I wrote one book. It’s called Cancer as a Social Activity.

Who’s your favorite writer?
I love Charles Bukowski. I can’t help it; his writing is so real. I also like Clive Barker. His horror stuff is really descriptive. The books are so much better than the movies. I lost a lot of stuff in Hurricane Katrina: 25 years of records, books and comics.

What were you doing during the hurricane?
I went to jail for 90 days. We kind of went into a pharmacy while everybody else was looting. When everyone was taking food and batteries, I was going in a different direction.

Are you or any other guys in the band into skateboarding?
When I was 15 or 16 in the ‘80s, all there was for us was punk rock and street skating.  We were too poor to have halfpipes, but we’d build small ramps in the backyard. It was mainly just lots of dropping off high spots and running up any incline available, grinding curbs everywhere. I had Independent trucks, a Santa Cruz 10” x 30” was my go-to board then, and I definitely destroyed a few. My favorites were Jay Adams, Steve Caballero, Tony Alva and mainly the master of disaster, Duane Peters. We lived on our boards and rode them to every gig in town. We listened to the Misfits, Zero Boys, Bad Brains, Die Kreuzen, DOA, Black Flag, Circle Jerks and tons more, plus all our great local bands. Those were the days, man!

Are you still doing your other band Corrections House?
Yeah, we’re still doing it. When I got sick, I took a break from that and Eyehategod for a little bit. I had to. But we’re gonna get back together soon.

Do you guys have a new Eyehategod album coming out soon? Are you working  on anything?
We’ve got about ten songs written. The music and vocals haven’t been done yet, but we’ll get to it sooner or later, man.

What’s your guilty-pleasure song?
It’d have to be The Carpenters. They do a cover of “Ticket To Ride” by The Beatles. They do it so slow and depressing. It’ll make you want to commit suicide.

What’s the most fucked-up thing you’ve seen on tour?
Funny enough, it was right here in San Diego. We once played on tour with Chaos UK  and some guy got stabbed in the back of the head. These skinheads showed up and they thought Chaos UK was a skinhead band, which they’re not at all. We were a lot more reckless when we were younger and now that we’re older we have to chill out a little bit. Back in the day, it was people throwing  bottles. We used to throw bottles into the crowd and there was just glass everywhere. Someone was always getting cut by falling on it or whatever.

What’s next for you and Eyehategod?
We still want to tour and record albums. I’ve been in bands since I was 15 and I’m just going to keep doing it until I drop. I might as well.