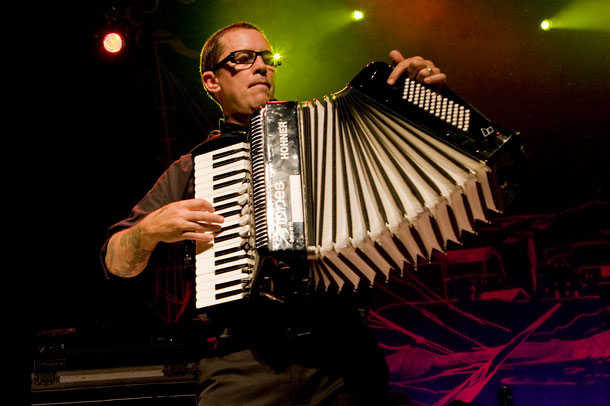 Some might contend that Matt Hensley (along with Alva, Hawk, Gonz, and Duffy)  is one of the top-five most important skateboarders of all time. While this may open a cauldron of debate, it’s certainly true that over the past 35 years there have been a few monumental shifts in ’boarding, and these skaters were central in pushing us from one era to the next. Today, Matt is perhaps better known as the accordion player for the Celtic punk sensation Flogging Molly, a possibility that he’s not ready to ponder. I caught up with him to discuss life, music, and the tug of war of being a true skate rock icon.

What are you doing?
Working at my bar, man.

How is the Flying Elephant Pub?
It’s hanging in. We have live music six out of seven nights a week. The recession isn’t helping anyone,  but the worst is over. Our numbers are starting to pick back up. I used to think that no matter what time it was, it was a good time to go to a bar, but it’s not like that these days. Now I’m battling against people going to AM/PM to get a cheap bottle of wine so they can get wasted at their house.

And you’re still running Innes?
I am. I go over there when I’m not working at the bar. When I’m not doing that, I’m on a fucking tour bus.

You are a busy man, my friend.
It’s kind of retarded, dude. I’m just a skater/musician. I don’t know how to fucking run a restaurant, but I designed the place and I can keep the music going.

The place looks awesome. It looks like a mini-museum.
Thank you. I appreciate that; it’s all dedicated to things that have made a difference in my life.

Tell me about the Flogging Molly Live at the Greek CD/DVD that came out this year.
Our first record was a crazy-ass live record that was recorded half-assed through a bar’s sound system.  This new recording was done with all the right equipment. For Flogging Molly, we’ve been a band since ’96, so we figured it was time for us to record something live. I don’t know how it all worked out,  but we got to play the Greek. From playing a little bar to headlining the Greek Theatre, it was a big deal.

The Greek holds 5,000 people, and you sold out Red Rocks in Colorado, which holds 8,000. That’s gotta feel good.
Yeah, I was stoked; when you headline shit like that, it’s all on you. If there aren’t a lot of people in the seats, it’s on you. We go on the Warped Tour and big tours in Europe where it can be up to like 150,000 or 200,000 people, but all those people aren’t exactly there to see you. They could be there to see the  band after you.

Would you consider Flogging Molly a phenomenon at this point?
I don’t know if I’d say that. A lot of people relate to the music we play. We got lucky.

Do you get recognized on the street as the accordion player from Flogging Molly?
I do, which is pretty weird; I never thought that  would be the case, for playing an odd-ball instrument. I went to a baseball game with my kid and the girl sitting right behind me was a Flogging Molly fan— She was like, “You’re not in Flogging Molly, are you?”  And I said, “I am.”

She didn’t know you from skateboarding?
I don’t think she had any idea.

It’s such an incredible story, to go from the height of success in skateboarding to taking a chance with the accordion and then having another big success with Flogging Molly.
It sounds good the way you just said it, but when I was in it, I was playing accordion and just looking for people to start a band. Even at the height of my pro skating I was in a ska band. I knew at some point I was going to own a bar and be in a band. One way or another it was going to happen through skateboarding or around skateboarding. Playing music made sense.  I believed in Flogging Molly from the moment I got in. I felt like we could do it. How far we could go, I didn’t know. What we’re doing now didn’t seem like it would do well—radio people told us we would never make it. They told us we were a simple drinking bar band and that’s all we would ever be. We were like, “Fuck that!” As a band, we refused to accept that.
© 1981–2021 High Speed Productions, Inc.