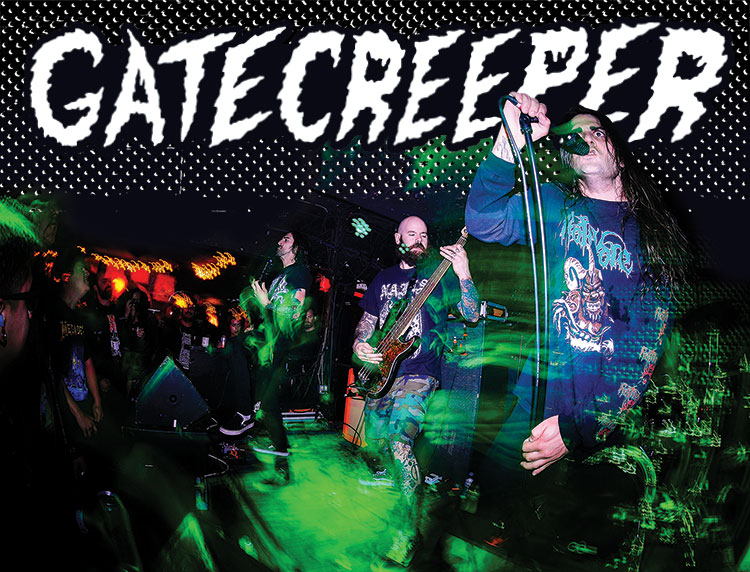 Caught Gatecreeper on a random Tuesday with a little help from the calendar alarm on my phone. Josh “Hallhammer” Hall, who’s filling in on drums, put the band on my map a few months back. I had chewed on some of their songs since then and dug it, but I wasn’t prepared to interview these dudes at all. With that said, I noticed a buddy from the neighborhood—half-hammered in the pit—waving his camera around. I laughed, took a step back, and noticed the crowd was on fire and got inspired. All the elements were present; it was the perfect storm. The next day via telephone I tracked Gatecreeper down in LA and they elected frontman Chase Mason to answer a few questions about the tour. –Sam Hitz  /  Photo by Max Kreutzer

Good show the other night. How did you like the San Diego crowd?
It was really good, man. The venue was cool, the sound was good, perfect size. People seemed to be into it, so it was good.

Yeah, not bad for a Tuesday.
Not bad at all.

Here’s a random question: did you bring anything from home on the tour for good luck?
Yeah, actually on our last tour in Florida I got one of those gator claws that’s on a necklace and hung it from the rearview mirror in our van. Every day when we got in the van in the morning we would pass it around and we would all kiss it and put a little love on it. It seemed to work out so we brought it with us and it’s kind of our new little ritual: put some love on the claw.

So you believe in that kind of shit?
Yeah, I think so. It's just fun. Anything that gets our heads on what we’re doing. We gotta remember we’re out here to play and kick everybody’s ass on stage every night.

What dates are you most excited about on this tour? What city do you want to crush the hardest?
Oh, man, I’m always excited to play new places. There’s a couple places on this tour where we haven’t played before, kind of smaller places: Iowa, St.Louis, Minneapolis. It’s always fun to play new places. It’s always cool to play in LA or in the Bay. I’ve been excited for LA because we get to play here pretty often, so it gets better and better every time.

Pretty cool that you’re touring with Pallbearer, just the fact that you guys are quite different. Do you see the audience change much from Gatecreeper to Pallbearer?
A little of both. A lot of people that are there just to see Pallbearer happen to see us play and they’re into it. And of course there’s some people that are fans of both bands. The dudes in Pallbearer were telling me in San Diego that they’re stoked that we’re with ’em because we get everybody super pumped up before they play, you know? We’re the type of band that can go out with a doom band, a hardcore band, another death metal band or a punk band. It always seems to go over well, so we try to do that as much as possible.

Does Gatecreeper have a message? What subject comes up the most in the lyrics?
I try to write about personal stuff. As a fan of music, I’m not a super big lyrics guy. I’m not someone that learns the lyrics of other bands. I mean, I write lyrics for the band and I think they’re good. I’m more about the riffs, you know? I just try to keep it a little bit different from your typical death metal band.

Yeah like getting in the pocket with the guitars. Still, is there something deeper?
Maybe a fictional twist on something’s that actually happened. I stay away from the political stuff. I just try to keep it a little bit different from your typical death metal band. Not a whole lot of gore and shock stuff.

A little deeper than lopped-off arms and zombie shit.
Yeah, like real world terror stuff. Personal stuff that I’ve experienced like drug addiction and just being in the desert. Depression. Real life shit.

The guitars are amazing live. The whole band nails it live. It sounds like the album. Is that the point when you’re on stage or do you like to throw any twists out there that we might not catch?
I like to play it pretty straight. I’d like it to sound like it is on the record, but even bigger, you know? There’s nothing fancy about it. It’s all about the riffs and just being heavy. Not much messing around; it’s to the point. The songs are pretty short. We’re writing things that are memorable.

Deliver the product and leave ‘em full.
I don’t want to play over 30 minutes—ever. We always keep our set less than 30 minutes, no matter where our slot is on the show. I would rather people want more.

I like how your songs are written, like, they might go six minutes and then you stop, cut it off.
Yeah, then you got to flip the record back over or start the CD over and listen to it repeatedly, rather than get worn out on it once.

Do you differentiate your set list from town to town?
Sometimes we’ll have spaces in the set list where we can play one song or the other. But for this tour since Josh Hall is filling in on drums for us, we kept it straight so he knows what we’re gonna play. We didn’t have a lot of time to practice it together and you know, again, we want to play it as best we can.

That’s awesome you put HallHammer on drums for the tour. Is he playing it safe or has he let loose yet?
He’s starting to loosen up. I could tell he was very, very focused on playing exactly how it was supposed to be played, which is super cool to me. You could tell it was super important to him to nail it. It’s been awesome to play with him on tour.

Dude’s a professional machine. Have you ever seen him skate?
Yeah, we’ve been skating on tour. Yesterday we had the day off and went to the beach and this little skatepark. We got a couple boards with us, so we’ve been able to skate when we can.

Are you the kind of dude that likes to keep flyers and demos from the road? Who in the band ends up with the most shit after the tour?
I’m gonna say our bass player, Sean Mears, because he’s always, like, ”Hey, I got these records. Could you put ’em with our merch?” But I’m guilty of it too. I collect stuff. We’re in a record store right now, so–

The album is relatively fresh on Relapse records. Does that put more pressure on touring?
I don’t feel any pressure. It makes it more exciting. We got shirts to sell, but also have a record to sell that’s on this badass label. It’s cool. Makes you feel good, like you’re out here for a reason.

Yeah It’s a flamethrower under your ass, really. You gotta be stoked. Go take some heads.
Exactly!

You can find mysticism in anything if you look for it. What endeavors lie on Gatecreeper's plate for the future?
We just want to keep putting out good music, touring with cool bands.We’re going to Europe this year, which has always been on the bucket list for a lot of us.We just want to play to as many people as possible, make new friends across the world, just get out there and play and have fun. That’s about it. Can’t ask for much more.

Where would you like to see the band in three years?
Have our second full-length album out on Relapse, do some headlining tours, bring out some other bands. Maybe a band that hasn’t even started yet, you know? Do what we can for other bands that bands have done for us. Hopefully the tables will have turned at that point.

That’s a great attitude. Praise the gator foot. Search out some slappies and give ‘em hell.
We will. We’ll be back in San Diego again next month at Brick by Brick so you should come out and hang.We’ll chill and maybe get to skate a bit.