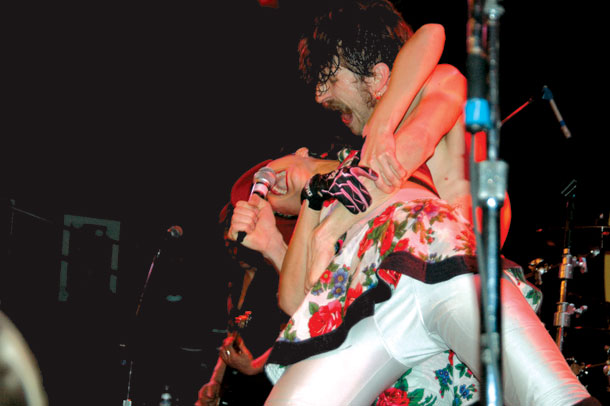 I figure Eliot Ferguson —the drummer of Gogol Bordello—will forgive me for having never done an interview and asking irrelevant questions and potentially wasting 30 minutes of his time, since we’re best friends (or so he says.) I’m a girl in a five-piece rock band, he’s a boy in a nine-piece gypsy  punk band… It’s gonna be great. I ask to meet Eliot at Rockefeller Square to go ice-skating. It’s a sure-fire way to catch him off guard.

Eliot, what’s it like being in a band with your sister?
You know, it’s sometimes a little close to home.

Glad we got that out of the way. When you’re on stage and people yell for you to take off your shirt, what do you say? What do you feel back there behind the drum kit?
I say at least wait until the third song when I’m nice and sweaty.

Do you play music for spiritual reasons or financial reasons?
Oh, it definitely has nothing to do with finance.

Many bands are out for fame and fortune. What do you think?
We do it because we love the music, and we love to play. It’s an added bonus that we have fans who like our music.

We hired a guy to do monitors recently and he left the tour half-way through saying I was “HTWF,” which means hard to work for. Are you guys hard to work for?
We’re always looking for the right team members. Now we’re honing in on those people. So, yeah, we have gone through a number of people.

Why don’t you have a mustache?
I can grow one, but it looks like something out of Starsky and Hutch.

Does it bother you when people call you “the drummer”?
If they even recognize me as the drummer in the band I feel like it’s made my day, because 90-percent of the time I get off the stage and people don’t even realize that I was up there.

Tell me why you joined the band.
I had just come from playing with bands in Southern California, and we were not really successful. I lost a lot of friends that I was really close to, because the people in the band lost sight of what the music was about and started getting caught up in the business part of the industry—the who-wrote-what, what-publishing-goes-where stuff.

So what happens after these next few months of touring?
Time off means two months off.

What are you going to do? Do you ballroom dance?
I don’t dance period, but I’m thinking of taking dancing lessons.

Even without success, did you feel secure with your choice to play music five years ago when you were not as successful? Do success and validation and self-esteem all come hand in hand? Did you feel like what you were doing was meaningful?
The band for me has always been something special; that’s why I joined. I saw Eugene at a party playing on a stool and he was so passionate. He had two other guys with him, but it was simple. I had just come from—as I said—this California drama, like straight out of 90210, and I had lost a lot of friends. And then here is this guy sitting there playing, and really he was all about the music, and there seemed to be no drama. I was like, “You know, I want to play music just for the sake of playing music.” So for me, it was very special from the beginning. And probably the most special thing about the band is that’s it been real organic. We haven’t blown up; it’s been a steady, hard-working eight years.

Why should I be your best friend?
Because I am awesome. That’s only one thing. Two more things. I have amazing rhythm and I am an incredible ice skater.