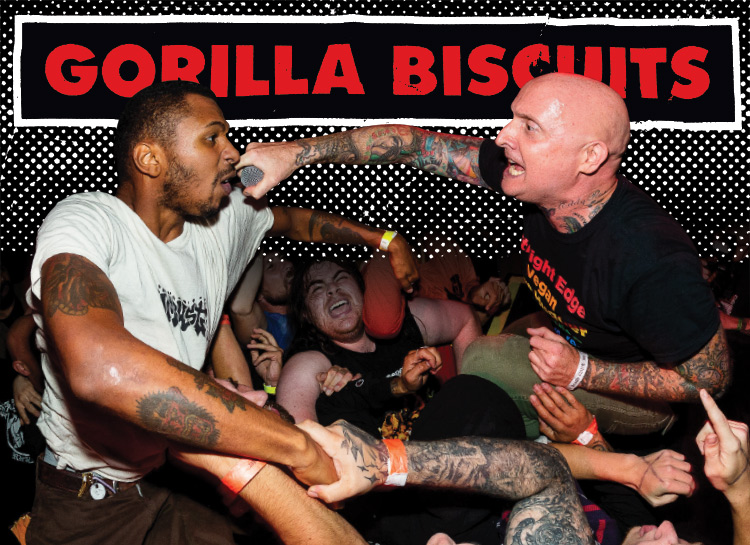 When Gorilla Biscuits returns to Queens, people show up. And they showed up hungry. Guitarist Walter Schreifels shares some insight to the NYHC scene and why it’s important to support diversity. –Jordan Joseffer

How was the Death Match for you guys? Did you get to check out the ramp?
Death Match was a blast. I checked out the ramp. There were some great skaters there, a radical sight to behold.

How’d you guys come up with the name Gorilla Biscuits?

A Gorilla Biscuit was the street name for a certain brand quaalude back in the day. I never personally took one and we were never a drug band. We just thought it was a fun and memorable name for a HC band.

How has New York shaped your music?
New York has shaped the band just as it’s shaped us as people, a lot. We grew up in racial and class diversity in school, on public transportation, the ultra privileged next to the destitute. In New York and especially Queens where Civ, Arthur and I are from, it’s impossible to wall yourself off  from your fellow man, across race, class, culture lines, high art and low. It endows you with a certain worldliness right out of the gate, an openness and higher comfort level with the unexpected and new than you’ll find in other cities. I love it.

What makes NYHC stand out? Is the West Coast soft?
Ha! No, the West Coast isn’t soft. When we first went out west there were already plenty of gangs involved in HC/punk. That didn’t happen in NYC ’til later. It was less organized. I guess it’s the suburban culture versus urban. The New York scene is and was more tight knit in some ways because we hang with each other more. We’re more likely to run into each other walking down street, on the train—it breeds spontaneity.

Does it trip you out seeing young kids going nuts to your songs all these years later?
Of course it does! In the best possible way.  We were those young kids once, too. It’s life  affirming to connect with that part of ourselves through music and in the company of such a cool next generation. I’m also super impressed by where stage diving has gone. There was some amazing dives at Knockdown Center that night: athletic, artful, Death Match-y.

What advice can you give kids to make their scene a better place?
Support diversity within the scene and shun violence. The New York scene was best when it had a variety of sounds and styles coming together: punks, anti-racist skins, metal heads, skaters, male, female, gay, straight— all different races and cultures. That mix made the music and the experience of going to a show great. There’s a tendency to orthodoxy and sameness in scenes once they get successful. One group or another will want control and ends up taking all the fun out of it. Also, violence makes it harder to find venues and rightly scares away people who, sensibly, just want to have fun and not get beat up. 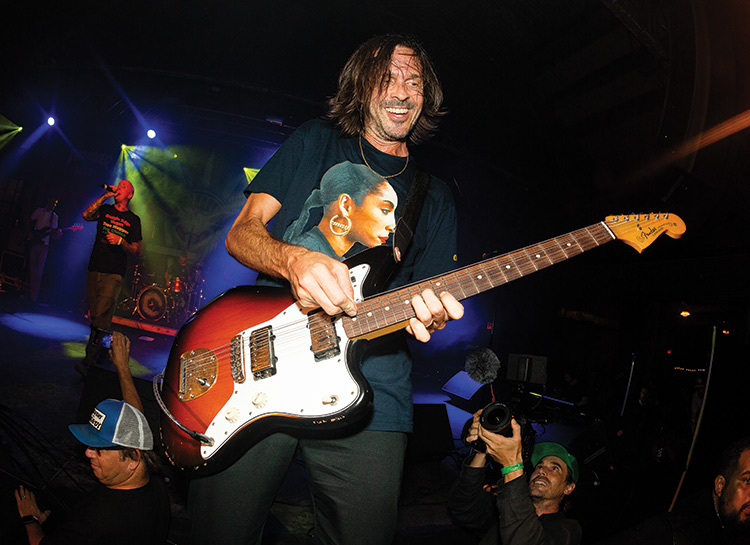 Where is a good starting point to  start today?
Go for a run before breakfast.

What originally influenced the bands PMA?
We loved the melodies of the Descendents, the optimism of 7 Seconds, the pissed-off-ness of Minor Threat and the musicianship of Bad Brains. These influences amongst others shaped the GB musical worldview that you may call  our PMA.

Last words?
When we were coming up, Thrasher was the biggest forum for punk and hardcore you could find. It was the best means of reaching out to the wider audience of skate culture. We all skated, poorly, but enthusiastically. That GB got on Thrasher’s radar made us feel like we must be doing something right. Getting invited to play Death Match years later reminds us of those early days and what we hoped to achieve. It’s very cool to me that Thrasher and GB are both still shredding.