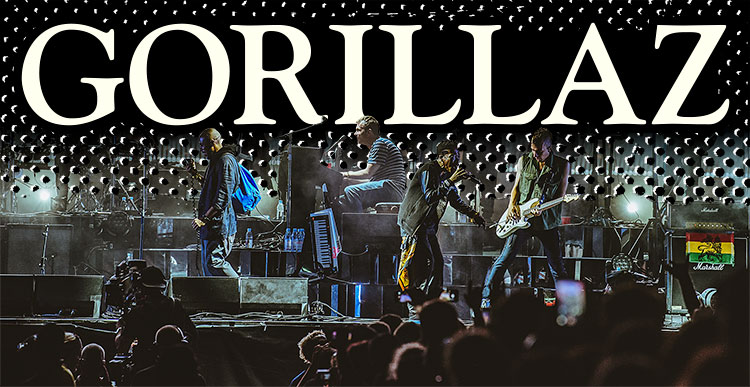 Standing centerstage at Red Rocks Amphitheater in Morrison, Colorado, Gorillaz frontman Damon Albarn is backed by a massive screen buzzing with wild visuals. Murdoc, Noodle, 2D and Russel—the four characters that make up the British cartoon band—bounce along to music from the Gorillaz’ extensive catalog, including their newest album, Humanz. Before he was selling out legacy venues with Gorillaz, Albarn fronted Blur, which was an indie-rock phenomenon all its own. Albarn and Gorillaz’s co-creator Jamie Hewlett never imagined they’d still be here 16 years after Gorillaz self-titled debut. Albarn had some time to talk hip-hop, his fear of robots and what makes him a “dystopian melancholic.” —Kyle Eustice

I understand you grew up playing piano.
I’m a piano player at heart. I’m at my happiest when I’m singing and playing the piano, but in the early days of Blur, I had to switch very quickly to writing on the guitar because lush elaborate piano chords in an indie band are not really ideal.

Right—unless you’re trying to be Coldplay.
That’s not one of my aspirations.

Where did your interest in hip-hop come from?
I think it’s just living in West London and that’s what all my friends were into. They weren’t into indie music at all. When I met Suzi, she didn’t even know who I was. She’d spent the ‘90s abroad and was totally into hip-hop. There was a lot more of that in my environment at that time.

When I was in London, I remember seeing all these guys with mohawks and purple hair. It was this punk thing. It was fascinating but I always think of punk rock when I think of London.
Two-tone, as well. That’s kind of the connection to the Gorillaz — that’s kind of how I blossomed into the person I am now is through my real empathy with two-tone while I was growing up. Living in Essex, which is a very, very white county, the fact that The Specials was on Top of the Pops was incredibly inspiring. I was optimistic.

In an interview with Jesus and Mary Chain, Jim Reid was telling me it was like a dream to be on Top of the Pops.
It really was.

With Blur?
Yeah. I loved it. It was great. You’d look forward to it. It was pre-Internet. It was literally the most effective thing you could do. You went on Top of the Pops, you’d do it if you’re an indie band because you had a big fanbase, which would mean your record would score high on the charts first week. It wouldn’t necessarily get played on the radio, but if you got on Top of the Pops, then you had a good chance of crossing over to a mainstream audience.

You said in an interview you had some kind of fear of robots. Where did that fear come from and what is it about?
I think my dad actually pointed this out to me. Kids don’t daydream anymore, so it really kind of struck a chord with me. Those moments that daydreaming was sort of meant for are now sort of seeing how many likes you’ve got on Instagram, which is a form of abstract relation of dreaming, I suppose. I don’t profess to understand my daughter’s interior life—not that any father could ever have done that ever—but it just seems more acute than  ever now.

Do you think everything will be controlled by robots in the future?
No, I just think we will slowly lose an understanding of what emotions are human and what are digital.

Kind of interesting the new Gorillaz album is called Humanz. Is writing for your solo albums more autobiographical?
Yes. I am capable of changing subjects. At the heart of it all, I’m a dystopian melancholic.

You were saying sometimes the Gorillaz’s dark content turns people away from collaborating with you.
I think a lot of people find it quite difficult to wrap their head around it, and it’s sort of prevented me from becoming more mainstream, which is not necessarily a bad thing.

Not at all.
Not to me either, but I do think it’s definitely had an influence on that.

It’s interesting you say that because some of your most melancholy songs are my favorites. Like “Tomorrow Comes The Day” is probably one of my favorites and it’s very sad.
It really is. Sometimes I sing it and I’m, like, Fuckin’ hell, really? Did I really feel like that then?

You probably did.
I did.

I think it’s cool you’re able to tap into those emotions.
I’m comfortable with them. In real life, I think I’m quite the opposite.

You’re always outspoken about celebrity. Do you feel like one now?
Not really. I value anonymity over fame. It’s way more productive. 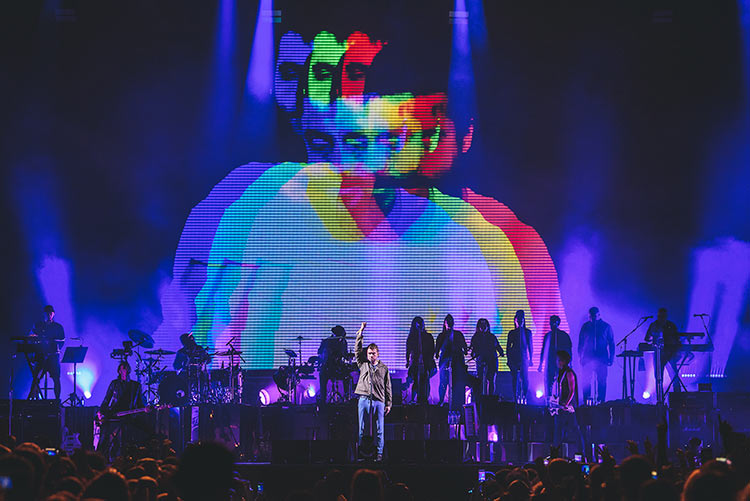 I think the way you did it is brilliant to have this cartoon band you can kind of hide behind. I think the idea of fame sounds absolutely horrifying.
It is. In a lot of people, it becomes a terrible sickness. The worst thing now, and I’ve started to see it amongst people I’ve grown up with, is the corrective surgery aspect of stuff. They get into middle age and they start doing weird things to their hair or hair color or hair identity, and wrinkles disappear. It’s just fucking weird. That’s just all kind of social pressure.

I can imagine it’s difficult, especially for women.
Oh yeah. You’d be surprised. Maybe women are better at just hiding the fact that they’ve had some sort of nip and tuck, but men are just really rubbish at it, and they just look really stupid.

Was your first show really The Osmonds?
No. My first show was Nik Kershaw at the Ipswich Beaumont.

My first one was Beastie Boys, Helmet and L7.
Much better than my first one. My second one at the Ipswich Beaumont was Squeeze, which was very good.

Who else did you like growing up?
Eighties bands. I mean, bloody hell—The Cure. I love all the early electro stuff like Depeche Mode, Human League, The Smiths. I love all of that. The Specials, The Selecter, I even like early Simple Minds.

I’m a big fan of Tears For Fears, too.
Oh, I love Tears For Fears. Tears For Fears—my god—some of those songs sort of revealed themselves to be of epic propositions. It was really that first album, wasn’t it? It was a massive album. I think fame and everything got too much for everyone and they never came back.

Like you said, it ruins people. I caught you on the Plastic Beach Tour and I about lost my mind when I figured out you were playing with two members of The Clash. You brought out Bobby Womack, De La Soul, Little Dragon. I was, like, What is happening?  It must be important to you to make sure it’s a big experience for your audience.
Yes, yes, but I mean, what I’ve learned is not to get too caught up in the bigness of the experience and retain some of the mystery of the band.

I think it’s smart because it makes it so you and Jamie aren’t really the sole focus. You’re just a part of the music.
Sometimes if there’s a big audience, I can sort of get carried away and the show off in me wins the internal struggle and I get in front and kind of forget that I’m in Gorillaz and think I’m in Blur. It’s quite schizophrenic. I mean, most people they do one thing and they really work on that. I do a lot of things, so sometimes I do mix my metaphors somewhat.