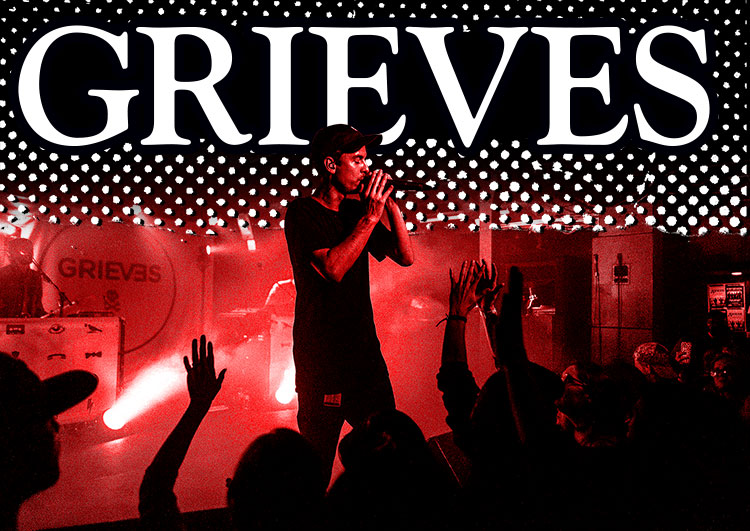 I caught Grieves at the Mystic Theater in Petaluma, CA. I laughed on the way when we passed the Birkenstock sandals headquarters. That ain’t gangsta. When we got to the show and my wife said, “It smells like manure,” I laughed again; hell of a setting for a night of rap music. On the car ride up we’d been listening to Kendrick and YG spin tales about Compton, or “Bompton” if you will. I was a little sad to see that no one in Petaluma was “bickin’ back bein bool.” And yet, when Grieves took the stage I was transported to another world. One where hip-hop and culture are a nation without borders and there is the promise of transcendent unity in booty shaking. All it took was flow, and heart and Grieves had them in abundance. —Eben Sterling

What is the power of hip-hop? What drew you to the culture and music?
To me, hip-hop as an art form has no boundaries. I was always drawn to that. Musically, it felt like a collage of all the music I grew up on, except for the brief phase where I didn’t wear pants and only listened to hardcore German techno. I was always into music but had a problem sticking with one style. Hip-hop allowed me to put it all in one place and tell my story the way I wanna tell it. Shit saved my life.

Why do you have a skateboard on the cover of your new album, Running Wild? Did you ride that board or did you get a set designer to thrash it up for you?
The board, as well as the other images on the record, symbolizes the journey of this record and my career. As far as wearing that bitch out— I don’t have money to pay somebody to fuck shit up for me. Where I come from, you want something done, you gotta do it yourself. That piece of shit was the size of a ironing board and weighed, like, twenty pounds. Took some effort, but eventually she broke. I think it would be tight if you could put a picture of me here as a sexy-ass matador or some shit.

I saw Kyle Mooney from SNL in your video. Is he the homie?
Yeah, that’s the homie! I actually met him on the set of that video and we kept in touch over the years. I’m really proud of that guy’s success.

What does keepin’ it real mean and why does it matter?
You know, like—when you’re at a Thai joint and you order the four-star spice level and they look at you, like, “Dude, you’re too white for that shit. You should get the two,” but you get it anyways? It’s kinda like that.

Who are those guys on stage with you and what are they doing up there?
Those guys? That’s the goon squad! I try to bring the studio to stage when we perform and these guys help me accomplish that vision. Jonathan, our guitar player, handles most of the digital stuff as well as bass guitar, drum pad and auxiliary percussion. On the other side we got Pants. Pants plays the keys, synth. and steezy dance moves. Between the three of us, we’re able do what a six-piece band could do. It’s a lot of work and prep, but it’s worth it.

Why did you go to Sweden to produce your last album?
I’ve always wanted to work with Chords; we just never had the time. I thought when I brought the idea up that my manager and label were gonna tell me to go fuck myself and make the record at home—but they didn’t. It was a rad experience. All I did was make music and look at sexy-ass Swedish people.

How have things changed over the past ten years since you started performing as a hip-hop artist?
Hip-hop has grown, its audience has grown, the artists have grown and the scene has gotten closer. It’s nice to see these younger kids out at the shows that don’t define themselves by one sub genre or artists. Cats can go from my concert to a Ying Yang Twins concert and it’s all love. I like that shit.

Your merch at the show was super legit. Are you trying to take out Thrasher in the street-wear game?
I’ve always been inspired by the street-wear scene when it comes down to designing and curating our merch. I don’t want people to look at it like a band shirt, but more like a lifestyle. I’ll fall back, though, unless I catch you in the rap game—then it’s gloves off!

Got any words for the Thrasher readers?
Yeah, stop sending nudes to my LinkedIn page.